I missed Elvis on ‘Sullivan’ – was only five years old.

My parents watched the show religiously; I usually took a pass.

It wasn’t just The Beatles; many of the best British Invasion bands appeared on ‘Sullivan’ in ’64-’66. Who can forget Jagger mugging the word “time” when forced to change ‘Let’s Spend the Night Together’ to ‘Let’s Spend Some Time Together’?

Miami went nuts for The Beatles. WQAM’s Rick Shaw started playing ‘I Want To Hold Your Hand’ in late December. After the February 9th appearance, the band flew to Miami and stayed at the Deauville on Miami Beach, prepping for their February 16th ‘Sullivan’ appearance. I will never forgive myself for going to school instead of skipping and taking the bus to the beach.  (Was I in Florida? Yes, North Miami Junior High ... 7th grade then. Moved to LA in ’68 and did senior year at Canoga Park High.)

Sullivan was NOT a rock ‘n’ roller, by any stretch. Vaudeville was more of a touchstone for him. But he was shrewd; he knew his success as a presenter meant providing something for everyone during his hour on the air every Sunday night, and keeping up with the latest trends the younger demo were into.

If we kids couldn’t stand the latest plate-spinning acrobat juggler, we’d just wait for him to say, ‘And now, something special for the youngsters…’  Sullivan’s savvy extended to hiring the right talent bookers who knew his audience, and that’s how he kept his show in that prime family time slot for 23 years.

The British Invasion acts dominated Ed’s program for most of those key years, 1964 – 1967.  Ed was also VERY big on Motown acts … rarely a week went by when somebody from the roster wasn’t making an appearance.  (Of course with a talent pool THAT large, look at all he had to pick from!!!)

Yes, we all sat thru the boring bits … the stand-up comics, the plate spinners, the vaudeville harmonicats and the like and the reenactments of the Broadway stage brought to life on stage at The Ed Sullivan Theater … ALL to get to the top hit-makers of the day.  We really didn’t care WHO it was … if it was music that we heard on our radios that never left our ears, then we were all in!!!  (kk)

When I saw this, it brought back a great musical memory.
>>> eMovie Ticket Radio (TM) will have its premiere weekend on WEBR1440 and webrradio.com Niagara Falls  (JR Russ)
While in the car one night, in Chicago (1:45 AM EST, November of '97), I was tuning the AM band for new stuff.  When I hit 1440, there was a station that was somewhat listenable but fading periodically.  1440 was a mess at night, and I knew it wasn't WROK in Rockford, IL, because they were daytime-only.
I thought I was dreaming - the DJ was playing "You're the Apple of My Eye" by the Four Lovers, RCA, 1956.
The lead singer was a young man named Frankie Valli.  When I got home, I called the station, and chatted with the DJ, a teenaged college student named Matt Alperio. The station was WJJL in Niagara Falls. He asked where I was calling from and when I told him I was five miles from O'Hare Field, he freaked out.  I checked their stats, which said that they ran about 100 watts nighttime power, but Matt said that due to their interference with another station, they had to lower their nighttime power to 16 watts. I tried to get a verification from them but they wouldn't send one.  Never heard them again.
Mike

Are you sure it wasn’t Wolfman Jack broadcasting out of Mexico City???  And were Ron Howard and Richard Dreyfuss there with you when you heard it??? (lol)

Amazing in so many ways … that a station with THIS weak a signal could transmit all the way to Chicago, no matter HOW clear of a night it was … and that a teen-aged college student broadcaster would even know who The Four Lovers WERE!!!

That’s the magic of radio … it has created special, one-of-a-kind moments for ALL of us that somehow manage to still stick with DECADES later.  The Power of Music … there just ain’t no denying it!!!  (kk)

Best Classic Bands salutes the WLS Chart from this date in January of 1969 ...

And check out the young deejay being promoted there at the bottom!  (We'll hear more from him in a minute!)  kk

And you can listen live all weekend long here:

Sam Tallerico offers up Part Two of his salute to the music of this week in January, 1971, as well as January, 1966, on his LAFOS / Lost And Found Oldies Show, Saturday at 1 pm Eastern ...

JR Russ launches eMovie Ticket Radio on
webrradio.com from 6 pm to Midnight on Saturday and Sunday ...

And Phil Nee will be doing his weekly Those Were The Days radio program Saturday Night from 6 pm - Midnight Central on WRCO:  http://us7.maindigitalstream.com/2540/

And, if you just happen to be "in the mood" for some classic music of a different nature, you're sure to love this next bit ...

Chuck Buell “Validated” Tim Kelly the other day when Kelly commented, “It was like the day I read Chuck Buell was a Glenn Miller fan -- I thought:  "Thanks for the validation, Chuck … now I don't feel like the "Lone Ranger!"

While I’m not a Glenn Miller collector, I just always thought a lot of his music was “cool” ever since I was just a small kid and my folks would listen to his stuff on their big floor standing-console radio.  My favorite of his is the (before my time! ) 1939 version of “In the Mood.” 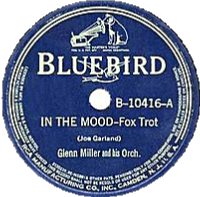 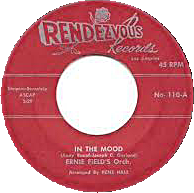 And then, of course, much later on, I also played Jive Bunny and the Mastermixers1989 version, “Swing the Mood!” 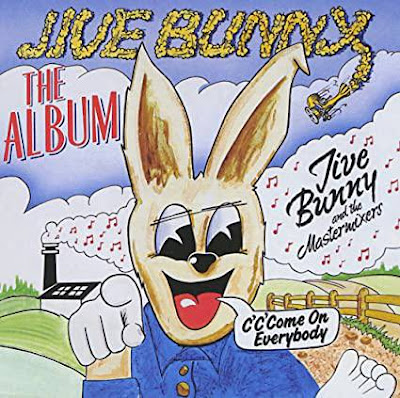 Fifty years of “Being in the Mood!”

Ah yes, but you left out perhaps the most DEFINITIVE version of the song, cut by Henhouse Five Plus Two (aka Ray Stevens) in 1976.  (Believe it or not, this one was a Top 40 Hit!!!)  kk

After reading recent comments about Jerry “The Beaver” Mathers in recent posts in FH, I wanted to contribute a few personal thoughts about Jerry.

I first met Jerry back in the ‘80’s when I was VP of Programming for the ABC Radio Networks.  I had read that he had been a DJ in California, was a musician, and had a huge love of music.  I had an idea of syndicating a show where Jerry would interview recording artists that grew up watching him on TV for classic rock stations.

We were ready to announce the show but then I accepted an opportunity within ABC to take the job of VP of Programming at WPLJ-FM / NYC and the show never happened, but I kept in touch with Jerry, because he was such a terrific guy.

Over the decades we have done many promotions together and I was always impressed as to how he treated any fan.  Even though someone would ask him a question about “Leave It To Beaver” that he has been asked a million times since the 60s, he would sincerely answer the fan question like it was the first time he was ever asked it.

One time Jerry was starring on Broadway in the musical “Hairspray” and he had Monday nights off.  One of his music heroes was performing every Monday night at a jazz club in Times Square: Les Paul, the father of the electric guitar.

I arranged for us to attend and we had a blast.  Halfway during the show, Les says “I’m honored tonight because I’ve noticed we have a very special guest on hand for the show.  This is a guy that America grew up watching on TV at a time when TV shows had a positive message.”  He completely stunned Jerry, who had no idea he was going to be acknowledged by Les.

Then Les proceeds to invite Jerry on stage and does a quick Q&A with him.  Les invited Jerry backstage after the show, and because I was Jerry’s partner in crime that night, I went back with him.

Just last month at the radio station we were doing a charity fundraiser for “Why Hunger” the charity co-founded by Harry Chapin and Bill Ayres.  And I asked Jerry if he would donate a Zoom call with the highest fan bidder and he graciously said yes.

I have many Jerry Mathers stories, and they’re all positive, so I’ll leave you with a recent photo when Jerry was in NYC doing an autograph show and a Today Show appearance with his big brother from Leave It To Beaver, Tony “Wally” Dow, and they both stopped by our iHeart Radio  studios. 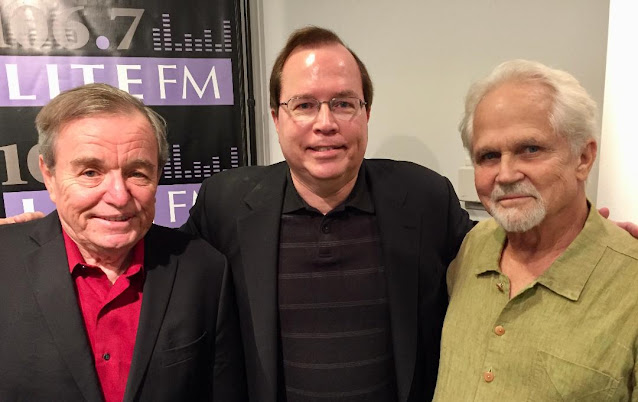 After watching the series finale of “Leave It To Beaver” over the weekend, we started the show from the beginning earlier this week in order to see it all again.  Can you even imagine … it was on the air for six seasons and aired 39 NEW EPISODES per year!!!  That’s UNHEARD of these days where a number of series only air six or eight episodes per season.

I’m looking forward to watching these guys grow up again, right before my very eyes.  It was a very intelligently written show with laughs in all the right places ... and the occasional tear now and then, too.  (Eddie Haskell was introduced in Season One, Episode Five, in the episode we watched last night!  lol)

Thanks for sharing, Tom … your memories are welcome here ANY time!!!  (kk)

And Eileen sent us this photo of what I'm calling "Whipped Cream ... The Winter Edition" ... to close things out today ... 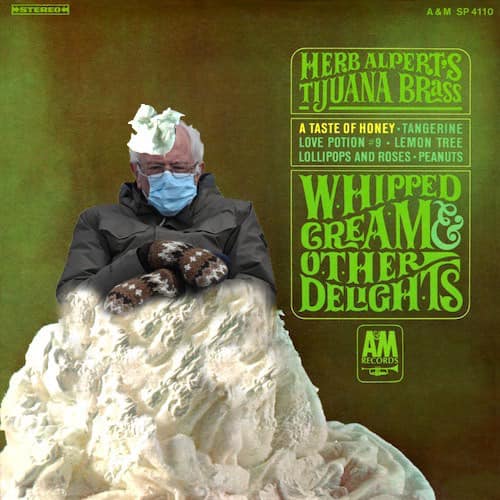