With the WORLD SERIES upon us (remember, this piece FIRST ran in October of 2003!!!), this seemed like an even more timely time to feature today's track!!!

In 1982, a great parody (released as Bruce Springstone ... singing Take Me Out To The Ball Game) made the rounds to all the radio stations. Sounding an awful lot like Springsteen himself (and selecting a tune no more outrageous than some of the ones Bruce himself was performing on stage at the time), it was a very clever attempt to cash-in on the Springsteen phenomenon. Unfortunately, it pretty much disappeared without a trace after a few weeks of FM airplay ... and today is a pretty collectible item. (I saw it on EBay with a starting bid of $30 about a week ago!)

The B-Side was every bit as clever ... "The Boss" singing the classic television theme song Meet The Flintstones! (In fact, it all made perfect sense ... after all, if The Flintstones television series could introduce us to Ann-Margrock back in the '60's, why not Bruce Springstone in the 1980's?!?!?) 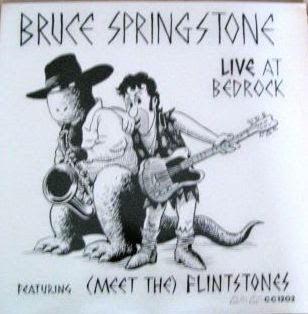 HOODAT?: Just who really did the vocals on the Bruce Springstone single? Our research turned up half a dozen different possible candidates. According to a "Bruce Springstone Bio" that was included in a promo copy of the single, Tom Chalkley and Craig Hankin found an original pressing of this song recorded on Ice Age Slate (a special kind found ONLY in New Jersey) in the cut-out bin at Chick's Legendary Records in Baltimore. Bruce Springstone himself was found, perfectly preserved in permafrost, 500 feet beneath the Vince Lombardi Memorial Rest Stop on I-96. Since we couldn't conclusively prove otherwise, THAT's the version of the story that we're going with! (LOL)
Posted by Kent Kotal at 5:51 AM