A brand new Olympic Record was set yesterday when it was announced that all Olympic participants will be given 37 condoms to be used during their stay in PyeongChang.  (What is it exactly that they're competing in, I wonder?  And damn … if THOSE competitions were televised I might actually WATCH the thing!!!)

Foghat could have made a KILLING here … and even performed at the opening ceremonies!

And how exactly did they come up with the number 37???  I mean, if they're sold in packs of six, does that mean that somebody else is getting a loose, random condom torn out of the extra pack needed to create 37???

The whole thing just doesn't make sense to me.  Really, shouldn’t the athletes who have trained SO hard for this event … in many cases, their whole lives ... be focused on something else leading up to their big moment?  (kk)

Remember back in the old days when a person would dedicate and devote their whole life to working at a job they could be proud of … and feel a part of … put in 40 years and then retire with pride for a service well done and appreciated.

Well, you can add Paul Simon’s name to the list of our music heroes who have announced their retirement within the first few weeks of 2018, following in the footsteps of Neil Diamond (more so for health reasons than anything else) and Elton John (going out with a gigantic three-year pay day.)

There have been rumors for awhile now that Paul was stepping down from the stage but yesterday we received this official announcement from Paul to his many, many fans …

If anybody out there deserves the gold watch for 50 years of service, it's definitely these three guys.  Thank you for all that you have given us and shared with us during a lifetime of music.  We appreciate it.  (kk) 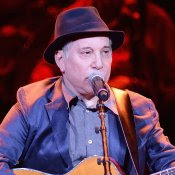 And, speaking of the end of an era, Best Buy announced last week that they will no longer be selling CD’s.  Likewise, Target is greatly scaling back on their inventory and says that in the future they are only willing to stock product that they pay for if and when they sell it – no more getting stuck with a bunch of merchandise they can’t get rid of.

As noted a few months back when I went car shopping, most new cars today don’t even come with a CD player anymore.  The days of joy of walking into your favorite ma and pa record store and browsing thru all of the latest releases … picking up this week’s WLS Silver Dollar Survey and then choosing two or three titles from that list to purchase as the latest 45’s to add to your collection … back at a time when the record store would actually order something special for you if they didn’t have it in stock … before the “big box” stores took over and greatly limited the selection to, most likely, THEIR version of the most popular records of the time … it’s all coming to an end.  (Did we ever think we’d see this in our lifetime?)
Rock and Roll was BUILT on teenagers going out and buying the latest 45’s.  (Of course the days of listening booths disappeared long ago … but I can still remember going into an upscale record store and sampling the latest cd’s with individual sets of headphones so you could “listen before you buy.”

Today folks download the song(s) they want … it isn’t important anymore to experience the whole album.  (And just last year we celebrated the way The Beatles’ “Sgt. Pepper’s Lonely Hearts Club Band” changed the way albums were made … and perceived forever!)

Me?  I guess I’m old-school … I still like to hold the thing in my hand … examine the booklet, read the liner notes and learn more about the music and the artists that I’m buying … so hopefully outlets like Amazon and Collectors’ Choice won’t be following suit any time soon.

Still … when you really think about it, it’s kinda sad.  We did ok as kids hangin’ out at the soda fountain, playing our favorites on the jukebox.  In hindsight I guess it was a simpler (and certainly less stressful) time. 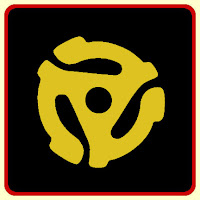 And, speaking of what I guess has become known as “The Vinyl Frontier,” we received some VERY positive reaction to Chuck Buell’s concept for vinyl flooring the other day … 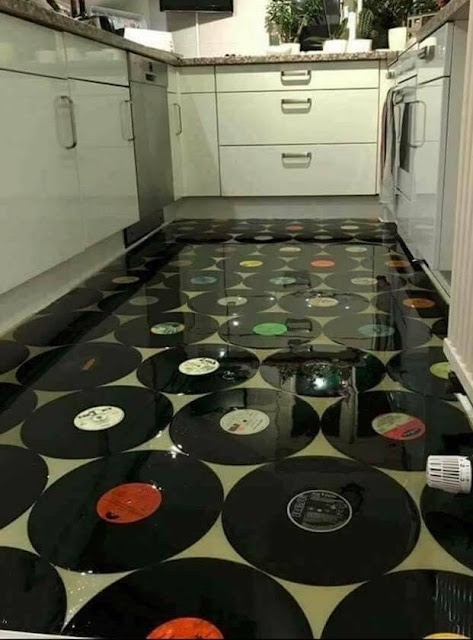 As for Chuck Buell's great vinyl flooring, I LOVE IT!  I might do my floors, basement and all walls with 45s now!
Clark Besch

I liked the interior design of your "vinyl" flooring in the kitchen. Personally, I would use 45's.
Larry Neal
I think you've got a real hit on your hands, Chuck … a VERY clever concept that would certainly go over well with our readers.  (Heck, we've already lined up your first two customers for you!) kk
Posted by Kent Kotal at 6:14 AM