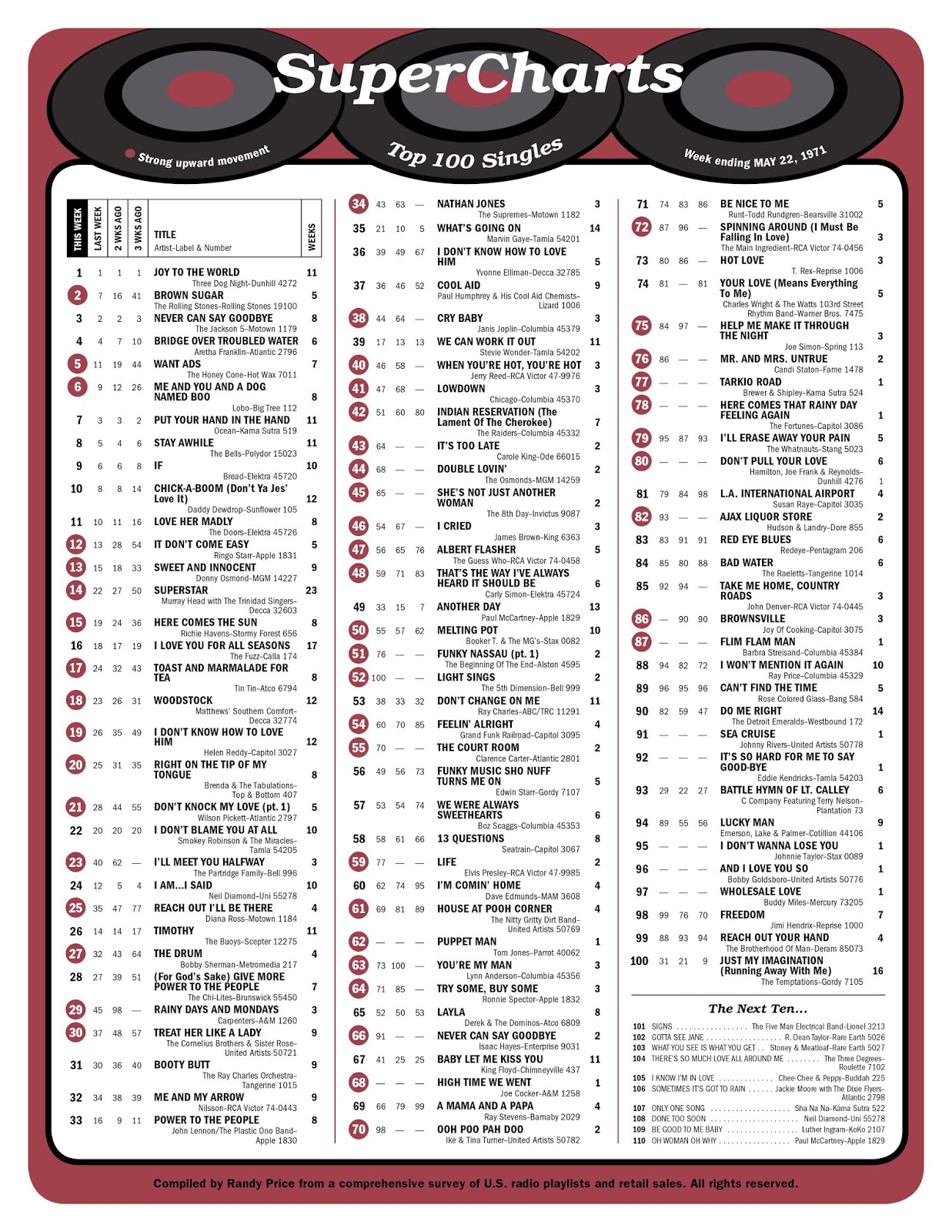 "Joy To The World" holds at #1 for the SIXTH week in a row, now the longest running #1 record of the  year so far.

"Superstar" climbs eight more spots to #14 this week ... and "Toast And Marmalade For Tea" by Tin Tin moves up another seven places to #17.

"I'll Meet You Halfway" jumps another 17 spots to #23 while The Carpenters move up 16 places with "Rainy Days And Mondays."

Playing Favorites:
One of my favorite Joe Cocker rockers, "High Time We Went," premiers at #68 this week.  Brewer and Shipley are back on the charts with their follow up to "One Toke Over The Line" ... "Tarkio Road" (a truly Forgotten Hit) bows at #77 ... and The Fortunes, who scored big in 1965 with "You've Got Your Troubles," are back on the charts this week with "Here Comes That Rainy Day Feeling Again" ... it'll go on to be their second Top Ten National Hit. And debuting at #80 is "Don't Pull Your Love," performed by my all-time favorite singing law firm, Hamilton, Joe Frank and Reynolds.


This Week in 1971:
May 16th – The Montreal Canadiens beat The Chicago Blackhawks to win The Stanley Cup.  It was the last NHL game that Jean Beliveau played in and the victory marked only the second time in NHL history that the winning team won Game 7 on the road.
May 19th – Poet Ogden Nash dies
May 21st – Paul McCartney’s second solo album, “Ram,” is released.  (Despite poor critical reviews at the time, it remains one of my favorites.)

May 22nd – Just ten days after a devastating earthquake destroyed the city of Burdur in Turkey, another Turkey quake destroys most of Bingol.  Over 1000 people are killed and over 10,000 left homeless in a quake that lasted all of twenty seconds.
Posted by Kent Kotal at 6:00 AM