Our final winner in this week's concert tickets give-away for the Brian Wilson Show November 11th at The Genesee Theatre belongs to Bob Burns of Bartlett, IL.


For me it started when I bought the Beach Boys Concert Album. I was enamored with the bass guitar more than the six string or the drums. I thought that Paul McCartney and Brian Wilson were more melodic players than the typical bass players in the 60's ... and when I got my first bass at age 16 and joined a garage band, I emulated these players.
When I realized that Brian was the creative genius of the Beach Boys, I thought. that's why ... all the harmonies and instruments work so well because of his vision of the songs and how they were constructed. I was bummed to find out that he had quit touring before I was able to see Brian on stage, playing his white Fender Precision Bass.
I followed the ups and downs Brian's career, like many of us did (and still do).
Pet Sounds was pivotal in my life as a bass player. I know that Carol Kaye was the bassist in the studio for the recording, but Brian was the instructor. Listen to Sloop John B's innovative bass parts hear to what I mean. I finally saw Brian on stage on the Pet Sounds tour - and he played the Fender bass for one song. I think he was looking at me ... for one song.
-- Bob Burns
Bartlett, IL

Brian Wilson has been quite prolific with his album releases of late.  In addition to live, performance releases like "Pet Sounds" and "Smile", performed in their entirety live in concert, Brian has also reached back to his past with his most recent release "No Pier Pressure" (featuring several of today's contemporary artists joining him in song) as well as tribute albums to the music that HE loved growing up ... everything from George Gershwin to Walt Disney!

FH Reader Tom Cuddy tells us Brian's next LP is already in the planning stages ...

According to Premiere Radio Networks, Brian Wilson is changing direction for his next album. After releasing No Pier Pressure, a well-received collection of original material that hit the Top 30 earlier this year, he's planning to go retro.


He also dismissed speculation that he had enough unused material left over from No Pier Pressure to use in a follow-up album. Wilson adds that he hasn't written a new song "for about year, now."

In addition, watch for a COMPLETELY revamped "Beach Boys PARTY!" album to be released in November ... now as a 2-CD Set featuring 70 tracks recorded during these sessions. 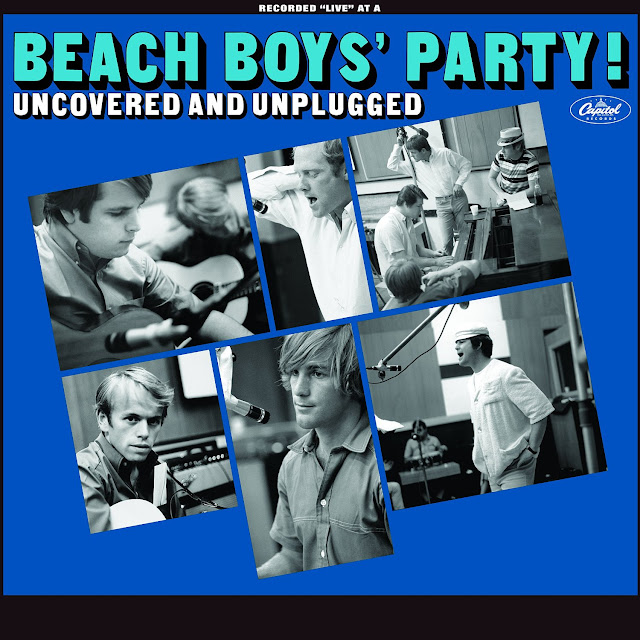 Beach Boys Party! will hit its 50th anniversary on November 8 and, in celebration, Capitol/UMe will release an expanded edition of the album that removes all of the party sounds from the original along with almost 70 tracks from the recording session.

Beach Boys Party! was a covers album that was actually recorded in a studio and had the party sounds overdubbed later. The set was quickly recorded to satisfy a request from Capitol Records for a holiday 1965 release and to give Brian Wilson additional time to develop the now classic album Pet Sounds. Their tenth studio album in just three years, it reached number 6 on the U.S. Albums chart and included the single Barbara Ann (1966 / #2).

Mike Love said "... we didn't really have time to develop the type of album we wanted to develop, which Brian was working on, called Pet Sounds … So we said, 'Well, what can we do quickly and easily?' And we decided to do this party album."

Over the course of several long sessions at Western Recorders in Hollywood, California in August and September of 1965, The Beach Boys recorded what was, essentially, the first "unplugged" rock & roll album, with instrumentation limited to acoustic guitars, bass, bongos, harmonica and a tambourine. Joined in the studio by a few friends and collaborators, the band ran through many of their favorite songs of the time, including hits by The Beatles, The Rolling Stones, Bob Dylan and others, even spoofing two of their own biggest hits, I Get Around and Little Deuce Coupe, with self-parodying renditions.

Beach Boys Party! will be released November 20 in a 2-CD set and digital album which includes photos from the sessions, package essays by Beach Boys historians Alan Boyd and Craig Slowinski, and notes by the new edition's producer, Mark Linett. A vinyl LP edition of the Party! album's original 12 tracks, remixed and remastered in the 'Uncovered and Unplugged' style, will follow on December 11.

Perhaps most amazing about this release is the fact that it went  right in to The Top Ten --- for all intents and purposes, a "throw-away" / jam session LP ... but because The Beach Boys' NINTH Top Ten Album in four years, ultimately peaking at #6 ... which is four points higher than their landmark "Pet Sounds" release would chart some six months later. "Party!" in addition to being perhaps the first "live" unplugged album by a rock band also set the stage in many cases as to what 'bootleg" recordings would sound like in the years to come.  Relaxed, behind-closed-doors warm-ups of some of the biggest name artists out there just loosening up before their big show.  Can't wait to hear this one all the way through!  (kk)

Dear Friends and Harmony Buffs!
Just a quick virtual word to let all know that my good ol' review of the BRIAN WILSON: SONGWRITER DVD has recently appeared anew.
Below is its url for your reading, re-posting, and / or Linking pleasure ...
http://www.ballbustermusic.com/bbm/columns/pigshit/01-2012/ten_reasons_why_brian_wilson_songwriter
Gary
Posted by Kent Kotal at 5:30 AM