Lately A River Seems To Be Running Through Our Comments Pages:
Still getting LOTS of "river" suggestions from our readers ...
(Guess you guys liked last week's Sweet 16 feature!)
Lots more coming up ... very special "Sweet 16" programming on the 16th and 29th of every month this year!
(Be sure to join us on Monday, February 29th, for our very special salute to Leap Years!!!) kk
I did a search on my iTunes database (I have over 51,000 songs in it) and came up with 85 songs that charted or are “Classics” that contain the word “river”.  The Music Vault came up with 662 entries for the word “river”.  That includes anywhere it finds that word – in the A or B-side, or in the artist name or even the label name.
Joel Whitburn
Damn!  And I thought I did a great job coming up with 35!!!  (lol)  Add in all the hits by Johnny Rivers and The Little River Band (the REAL one, of course!) and that tally will double or triple very quickly!  Thanks, Joel!  (kk)
By the way you've still got until the 29th of this month to take advantage of Joel's special February discount offer ...
Save $20 on orders over $100 ... and $50 on orders over $200!
Just use the special Promo Code "Presidents" when you check out on the Record Research website ...
http://www.recordresearch.com/
Kent,
One more river song for you and that is UP A LAZY RIVER by Si Zentner out of 1961. All of these river songs would make one DROWN IN HIS OWN TEARS.
Larry
Hi Kent,
Another song to consider is one of my favorite river songs: John Phillips' "Mississippi".
Dube
Although that one didn't make our river cut, you WILL find it featured in one of our March Sweet 16 celebrations ... so be sure to stay tuned for that.  (One of MY favorites, too!  In fact, I was just listening to it the other day!)  kk
Hey Kent,
Thanks for featuring all the songs with "river" in the title. Right away, I thought of a piece of music that takes up about two-thirds of side two of Chase's debut album, "Chase". It's titled, "Invitation to a River", and is a musical journey, dealing with the subject of suicide. One of the cuts is called, "Reflections", which features leader, Bill Chase, playing through an audio loupe, to harmonize with himself! Great stuff to pull off in the early 70s! You can actually picture the subject staring into the river, as you listen. If your readers have time to take in almost fifteen minutes, give it a shot!
- John LaPuzza
https://youtu.be/Ft3f3bNlKcM
Hi, Kent:
I'm two days shy of my 81st birthday. I don't know if I'm the oldest person on your list but I'll bet I'm in the top ten. So my list of "River" records is a reflection of my age and what I was listening to when I was a whippersnapper of thirty or so.
Here we go with a few not mentioned (I think):
Mills Brothers - Lazy River
Roberta Sherwood - Lazy River (I think she made a career out of that one)
Frank Sinatra - River Stay Away From My Door. Bobby Darin alludes to this one briefly in his version of Lazy River
Deep River by anybody
Bing & Gary Crosby - Down By The Riverside
Roberta Flack - River (I know. One of those album cuts not designed to evoke any memories. But I like it)
And did anyone mention Herbie Hancock's Grammy winner of  2008, a rare Album Of The Year award for a jazz recording? It's called  River: The Joni Letters, a tribute to Joni Mitchell, of course.   Joni and Herbie are long-time friends who worked together way back in 1979. There are no genre boundaries in music, it's nice to know.
Keep it coming, Kent!
Hil 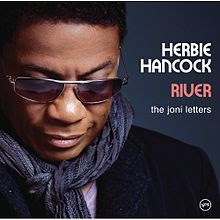 Happy Birthday, Hil ... one of the "original 35" subscribers to Forgotten Hits.  (Hey, that's WAY cooler than being one of the Hateful 8!!!)  kk

Hey Kent,
Are my eyes going bad? With all this talk about songs dealing with rivers did someone forget Ike and Tina’s RIVER DEEP MOUNTAIN HIGH??!! Tina had a solo version of this song as well, but as much as I can’t respect Ike’s personal behavior, I do have to admit I think the duet version is better. And there’s an ancient WLS Silver Dollar Survey, which you probably have, that lists it somewhere around #30.  Incredible.  I don’t think I was even in high school when River Deep came out. That song took soul music, if we could call it that, to a different area entirely … way ahead of its time.
Bill Fortune
It's there ... song #16 on the 16th ... can't leave out that one!  (Another reader thought we missed Bob Dylan's "Watching The River Flow" but that one's there as well ... in fact, I thought the blend of the Dylan track running right into the beginning of Joe Cocker's "Cry Me A River" was one of the best things about that whole feature!)
You guys know you can play DJ when we post these things, right?  As one song is fading out, you can start the next one to create the perfect overlap ... even throw in some of your own deejay patter if you want to.  Hey, have fun with it!  (kk)

The Grammys:
Yuck! The Grammys were hideous! Good Grief. That stuff is music? They have basically been useless for 40 years. Marriage Reality Boot Camp is about as interesting. Tributes to Old Musicians who passed away was only tolerable stuff. Put a Fork in them!
Ken Freck
PS - Uptown Funk wouldn’t be in the Top 5000 songs of 1966. I’m sure it would have been too lame to record back then. Maybe a couple of amateur Polka records weren’t as good. Then again maybe they were.
As for Girl Crush, I almost made it to a minute in before I fell asleep. Another let’s take the Country out of Country songs.
Sorry but I've got to COMPLETELY disagree with you on both counts here.  "Uptown Funk" is probably one of the best put-together, most exciting records of the past 20 years ... it takes the very essence of '60's soul, infectious pop and just the right amount of funk to create a sight and sound that is uniquely its own.
And "Girl Crush" is pure class from start to finish.  Maybe YOU think Janis Joplin could have cut a better vocal ... but I'll tell you what ... Karen Fairchild has one of the purest, cleanest, clearest voices I've heard in decades ... I found her vocal on this track to be as electrifying as a Linda Ronstadt vocal from way back when ... and that's really saying something!
You may need to get your ears checked ... these are two of the BEST moments musically of 2015 ... or any other year.  (kk)
And check it out ... Scott Shannon agrees with me!!!
I, TOO, AM A FAN OF GIRL CRUSH...WHAT A GREAT SONG!
SCOTT SHANNON
This And That:
Hi Kent and All,
Just updating the comments from “Bob” in reference to The History Of Rock magazine series.  It’s been released on a monthly basis for the past eight or nine months, and is actually currently up to the year 1971 in distribution.  It is made up of actual articles / interviews from the designated year, as originally printed in the Melody Maker and New Musical Express.  This gives it a very unique perspective now, so many years later, with so much of the “unknown” in music history still to be discovered at the time.
The yearly history series is being published by the makers of Uncut Magazine.  Uncut is a British publication that produces a monthly magazine dedicated to Rock music (with a slant toward bands from the 60’s, 70’s and 80’s, and does include a number of forms of rock / folk / soul, but not much heavy metal and little rap, thank goodness.)  Uncut is similar to another British monthly called MOJO. I have been purchasing a number of Uncut and MOJO issues each year for the last 10+ years. They both have extensive album (CD, Vinyl, etc.), music related DVD / BRD and book reviews, including 60’s, 70’s & 80’s CD & Vinyl re-releases & reissues / remasters reviews, which to many might be worth the approx. $10.00 - $11.00 price per issue alone.
Back to the History series ... the first issue released was the year 1964, I think, and is now up to 1971 (on “newsstands” now).  I have all of them so far, except 1964, which I’ll most likely get online via the publisher to keep my set complete. You can find them at Barnes and Noble stores each month. It’s interesting, though, that the 1966 issue which Bob had mentioned, was actually released about six months ago, and is available currently in food and drug retail outlets.  My guess is that for some reason there was an over-run for that issue / year, or maybe they are staggering releasing the series to certain retail outlets for some reason?
Anyway, these are fun reads, and can be a great collectors set.
Mike Stineman 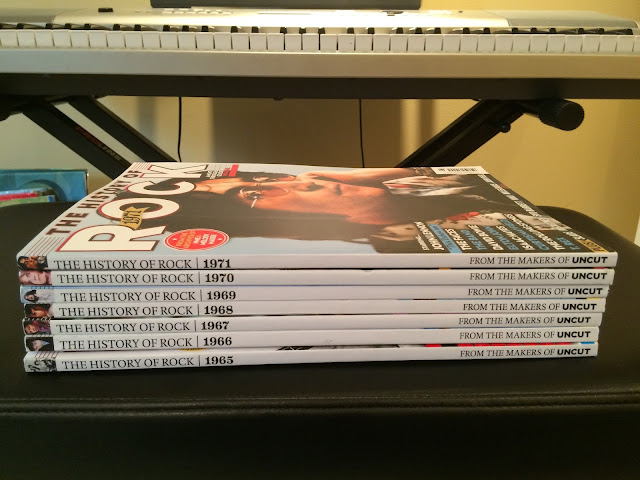