Tommy James and the Shondells


Tommy James is The King of Feel Good Music ... between 1966 and 1970 he scored 19 consecutive Top 40 National Hits ... and then went on to add five more to that tally under his own name as a solo artist ... and he played a good number of them at The Arcada Theatre Saturday Night to a sold out house.  (You'll find a complete set list at the end of this piece.) 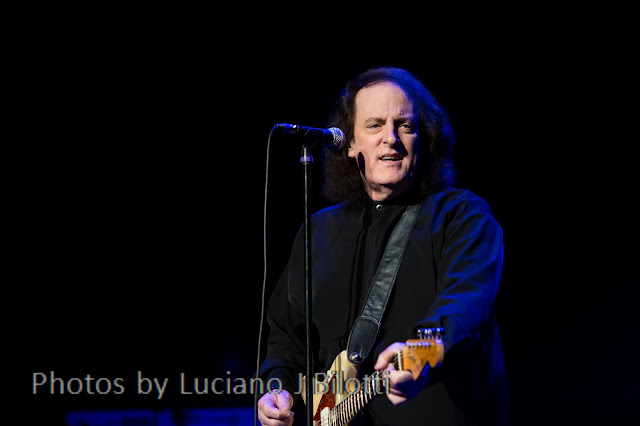 The Historic Arcada Theatre just celebrated its 90th Anniversary ... it started out as one of those old, vintage burlesque theaters back in 1926 ... and a lot of people don't know this but one of the very first acts to ever perform on that historic stage was Tommy James and the Shondells.  (Just kidding ... but can you believe that it has now been 50 YEARS since "Hanky Panky" first hit #1 all across America?!?!  Unreal!!!  And don't forget that Tommy recorded that song as a 16 year old three years earlier before some disc jockey in Pittsburgh discovered it and put it on the air!)

The rest, as they say, is history.

Tommy opened his show with "Draggin' The Line", a #1 Hit from 1971, one of FOUR national #1 Hits he had during his original reign on the charts.  (Incredibly he had SEVEN #1 Hits right here in Chicago ... "Hanky Panky", "I Think We're Alone Now", "Mirage", "Mony Mony", "Crimson And Clover", "Crystal Blue Persuasion" and "Draggin' The Line" ... Chicago has ALWAYS been a great hub of support for Tommy James!)

After a rousing round of applause and a standing ovation for his first song, Tommy promised to come out into the crowd later to shake hands and French Kiss every single member of the audience.  (He kept half of that promise ... and also did an extended signing in the lobby after the show was over.  I can't vouch for how many French Kisses were distributed but I can tell you that the crowd was enthusiastically up on its feet for the majority of the show, lovin' every minute of it.)

I can tell you that Tommy was in great voice all night long and still sounds very much like his records from 45-50 years ago.  He has continued to record new music, much in the same vein as the enormous hit collection that he built back then and that we all know and love ... he still sounds as good as ever and many of these are songs that, had the musical trends of the late '60's and early '70's continued, would have absolutely been Top Ten Hits back in the day ... excellent music that you can find on sale at Tommy's website: https://www.tommyjames.com/)

Gettin' Together  (This is one of my favorite "forgotten hits" from back in the day ... I remember mentioning in our last Tommy James review from a couple of years ago that the song REALLY needs to be performed with its signature hi-hat bit - it's the hook that MADE the record ... but once again it was performed without it Saturday Night.  Maybe this drummer just can't do that rapid-fire fill?)   In any event, here's the way it's SUPPOSED to sound:


And, in case you missed it, you can read our original 2014 review here:
http://forgottenhits60s.blogspot.com/2014/10/tommy-james.html

Next up was I Think We're Alone Now, performed in a slowed-down, acoustic arrangement which will be used during a dream-like sequence during the end credits of his film "Me, The Mob and The Music" whenever that finally gets made.  (I had a chance to visit with Tommy very briefly before the show and he told me that the movie is moving forward - and that several  big names are attached to the making of this film - but I swear they've been talking about it for over five years now and it sounds like not a single scene has yet to be filmed!  In hindsight, they should have worked out all these details BEFORE the book hit the streets so that they could strike with a theatrical release while the iron was still hot.)

Tighter, Tighter (the song he wrote and produced for Alive 'n' Kicking back in 1970)

Crimson And Clover (my all-time Tommy James favorite, which took on more of the heaviness of the Joan Jett version than the original psychedelic feel that made this such a stand-out track back when it first charted in 1969)

I Think We're Alone Now (again, only performed at its full tempo this time ... honestly, I think this probably would have worked better as an encore since he just did it four songs ago)

Do Something To Me (another favorite from 1968 ... I met a guy in the bathroom who told me that this was his favorite Tommy James song of all-time ... I then asked him if he'd ever heard the nearly identical original version by ? and the Mysterians from a year earlier and he said he hadn't ... so we're featuring that one here today, too ... this is a track that Tommy's very good friend Dave The Rave turned me on to several years ago)

Mony Mony (again, as before, an extend 15-20 minute version ... this is when Tommy goes out into the audience and shakes hands with hundreds of fans while the band jams on ... it also wraps up his regular set.)

Tommy's songs have been recorded by over 400 artists and he was a true innovator of SO many different styles of music back in the day, all of which worked perfectly for him ... they sold millions and millions of records and were literally on the charts (and on our radios) non-stop during this era.

Fortunately, Tommy's music has held up EXTREMELY well and is every bit as popular today, being heard every single day on radio stations all over the world ... yet he's another one of those GREAT, deserving and denied artists consistently overlooked by The Rock And Roll Hall Of Fame.  The man ABSOLUTELY belongs there ... and should have been inducted decades ago.  As stated earlier, he is the KING of Feel-Good Music and deserves his rightful place in history.  WE know ... the FANS know ... but the time to formally recognize him for his achievements is WAY past due.  (Jeez, just look at what the guy had to go through at his record label to get his records made!!!)

If you're one of the three people left on earth who hasn't already read it, you can pick up a copy of Tommy's best-selling book through his website (link above) ... it's absolutely fascinating and insightful reading about the underbelly of rock and roll ... yet despite all this pressure and obstacles, Tommy made it through with flying colors.  (He joked early in his set Saturday Night that they used to do acid ... but now do antacid.)  Order your copy today ... you'll be glad you did!  (kk)

We've also been telling you about The Crystal Blue Band, featuring three former members of Tommy James' Shondells during the hit-making years, who are also out on the road these days and in the process of recording an album of new material.  (An album of Tommy James and the Shondells covers is available through their website: http://www.thecrystalblueband.com/)
Posted by Kent Kotal at 9:35 AM