Dionne Warwick
>>>I believe Lou Johnson had the first version of "Always Something There To Remind Me" out in 1964  (Brad)
>>>Just checked my Whitburn book and you are correct, sir ... Lou Johnson had a #49 hit with this one back in 1964.  In fact, he covered THREE Hal David - Burt Bacharach tunes that year ... "Reach Out For Me" hit #52, "Always Something There To Remind Me" reached #49 and "Message To Michael" (then titled "Kentucky Bluebird" bubbled-under at #104.  Looks like Dionne Warwick went on to make all of these hits of her own shortly thereafter.  (kk)
Hi Kent,
I worked with Lou Johnson a few times. In the 80s - 90s he was filling in with various oldies groups around L.A. (Little Caesar & the Romans, Del Vikings, Ink Spots, etc). He was a good guy, good to work with, and did a good job. He said that, at that point, he hardly ever played up his own chart records. I think he may have had more success from that standpoint in Europe.Gary E. Myers / MusicGem

I've seen Dionne twice before, including a sweltering hot night at Ravinia in 1988.  She was there with Burt Bacharach that night and it was pure magic.  She's going to be 76 in December, and I was amazed by how fit and trim she looked when she dropped by the You & Me This Morning show here a few months back.
Hope you had a great time at the show!
Rick O'Dell
Me-TV-FM

Wow, I found myself agreeing with Chet on the vocal talents of Dionne Warwick.  (I’m worried!)
I’m totally glad you didn’t forget to mention “Don’t Make Me Over”, one of those memorable and rare songs where the woman is basically saying, “Chill! This domination crap doesn’t work for me.” Or did I miss the point? Well, you know, I refer to that same general theme as “You Don’t Own Me” by Lesley Gore. Also, there’s a totally fascinating documentary about Dionne that I saw on an ATA flight years ago. (Remember them?) It was great ... I’d love to get my hands on a copy.
Bill Fortune

I interviewed Dionne Warwick at her home in Beverly Hills in 1977 and she could not have been more gracious.  The first thing you'd see after walking in her front door was a two-story long tapestry with the titles of all her hits embroidered in gold, dangling down from the second story balcony near her opulent curving staircase.   Dionne explained that a fan has made the tapestry for her and it was one of her most prized possessions.   She then asked me if I had had lunch. When I explained no, she replied, 'Well, let me make you a sandwich ... I make the best sandwiches!"   We then entered Dionne's highly upscale kitchen and she in fact did prepare, just for me, an excellent lunch.   All the time she chatted as if I was a favorite nephew whom she hadn't seen in years and who had just dropped by   It was quite an extraordinary experience!  I came away highly impressed by what a warm, friendly and down-to-earth person Dionne is.   Oh -- and she also told great stories about her many hits.  We never saw each other again but the memory still lingers of her welcoming smile.

Gary Theroux
"The History of Rock 'n' Roll"
It's really too bad that the idiots that run The Rock And Roll Hall Of Fame aren't smart enough to recognize the fact that ALL of those songwriters who pitched their tunes on Broadway back in the day (The Brill Building crew and others) ... and the artists who had MASSIVE hits with those songs (including Dionne Warwick, Neil Sedaka, and so many others ... think for a minute about all the Gerry Goffin - Carole King songs that were placed back in the day, nearly all climbing their way near the top of the charts.)  This is ALL music that helped DEFINE Rock And Roll.  Yet they continually ignore this talent and its by-product in favor of some Rap or Hip-Hop Artist who barely made a blip on the musical landscape.  I just don't get it.  If somebody like Jann Wenner doesn't understand this ... and HE is in charge of this decision making process ... we're ALL doomed ... which has certainly been the case the past twenty years or so when it comes to recognizing the TRUE talent that advanced the "art form" of rock and roll music.  (kk) 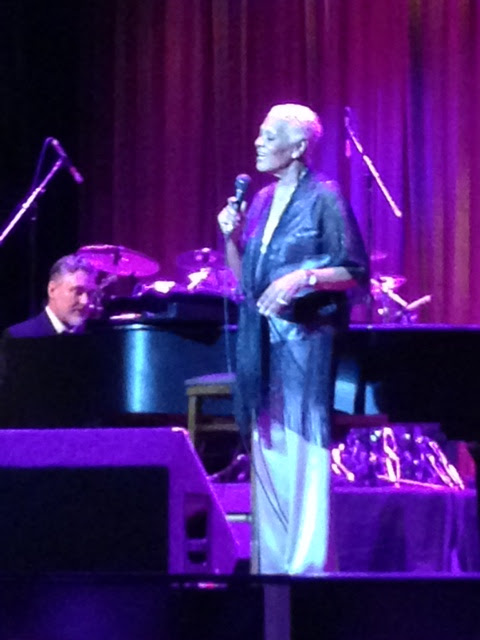 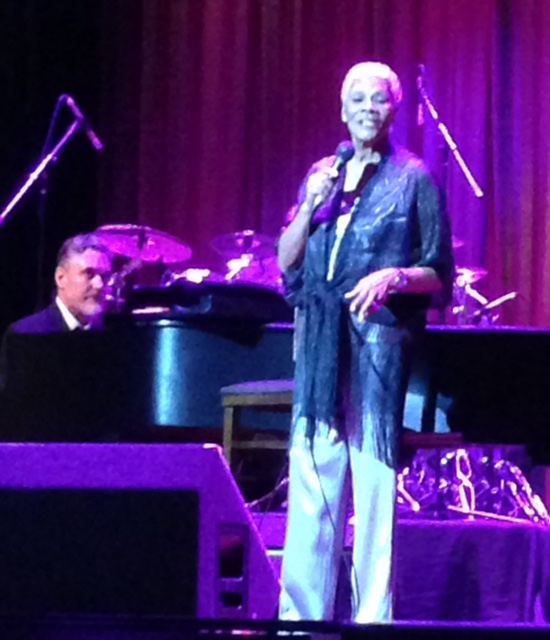 The Box Tops
In the category of forgotten releases by the Box Tops that got little or no airplay in Chicago, please don’t neglect “I Met Her in Church”. I remember driving along the Ohio Turnpike when that song came out. By tuning around, I discovered it was getting pretty substantial airplay in Cleveland and Toledo. The background singers for the Box Tops were just on fire for that tune. Not a huge national hit, but it’s one of my favorites.
Bill Fortune
It's one of my favorites as well.  In fact, their biggest national break-through hit ("The Letter") is probably my LEAST favorite by them!  I always preferred "Neon Rainbow", "I Met Her In Church", "Cry Like A Baby" and "Soul Deep" ... but my ALL-TIME favorite (next to "Church") has GOT to be their version of Bob Dylan's "I Shall Be Released" ... for me, it tops any other I've ever heard. (kk)

This And That
Sad to pass along the news (if you haven't heard it already) about the passing of Kay Starr, the first artist to ever score a National #1 Hit with the words "Rock And Roll" in the title. Although it had absolutely nothing at all to do with the sound of rock and roll, her "Rock And Roll Waltz" (I always liked this one, even as a kid growing up listening to my parents' old 78!) topped Billboard's Best Sellers Chart for six weeks just as the calendar flipped to 1956.  (Ironically, her label-mate Elvis Presley would burst on the scene a few months later and forever define the spirit of Rock And Roll ... but Kay was the first!)  kk


Hi Kent -
One of the cool things about living in the birthplace of Rock N Roll is having some great events at the Rock N Roll Hall of Fame.
They often bring in artists to tell stories, answer questions, and sometimes play a few songs, too.
This past Saturday, we were lucky enough to see John Hall, founding member of the group Orleans, and now a New York politician (and still performing too).
Was fun to hear John tell stories of how he got into music, the forming of Orleans, the No Nukes Concert, and eventually becoming a Congressman.
After chatting, he picked up his guitar and played a few acoustic songs, including Give One Heart (which was on Linda Ronstadt's Hasten Down the Wind album) and his hit Dance With Me.
A very fun afternoon!
Tom 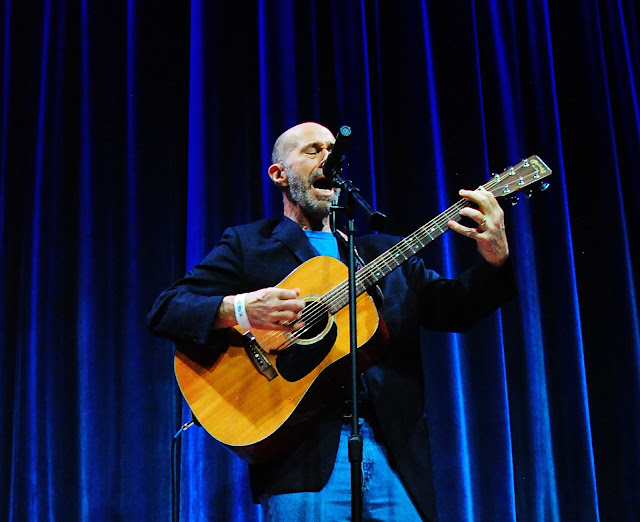 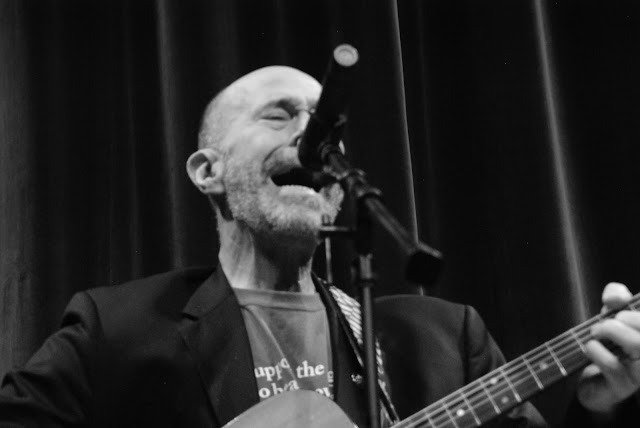 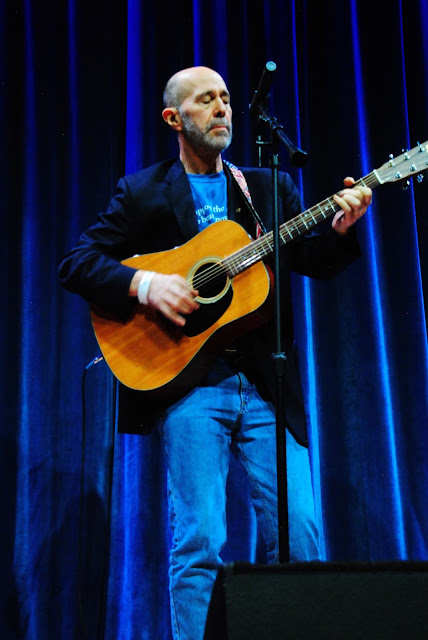 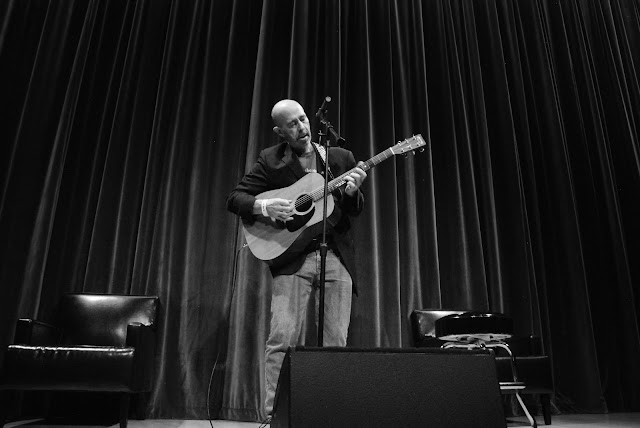 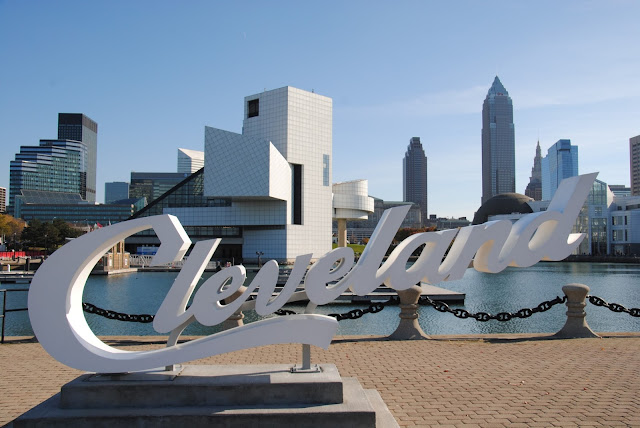 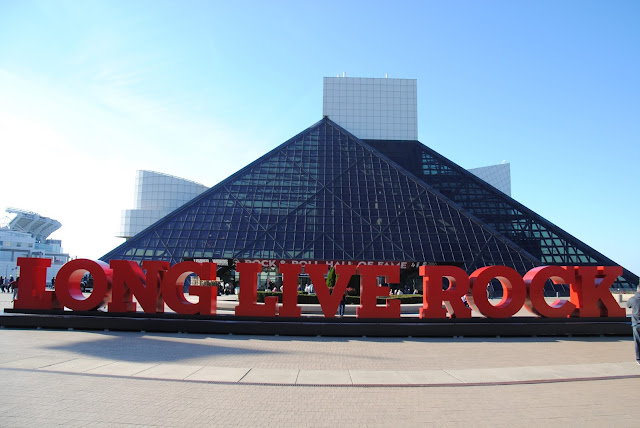 Sounds awesome, Tom.
We still haven't made it to The Rock And Roll Hall Of Fame yet ... ALMOST made it this year but had some last minute schedule changes again.
A friend at work told me of the time he was there and he ducked down the stairs to catch another exhibit ... and when he did, there was some guy sitting in the stairwell just strumming an acoustic guitar.
He later made his way upstairs to another music hall only to find out that the guy he stumbled upon was none other than Paul Rodgers of Bad Company fame!  (I guess you just never know who you may run in to there!  lol)
I've been fortunate enough to catch John Hall a couple of times now performing with Orleans when they've hit the Chicago area ... if you ever get a chance, check them out ... GREAT in concert ... and ALL these guys are extremely talented vocalists and musicians.
Ironically, FH Reader Carl Wiser, who runs the Songfacts website, did a recent interview with John Hall, too ... you can read it here:
http://www.songfacts.com/blog/interviews/john_hall_of_orleans/

Kent ...
You recently reviewed a Stylistics (minus Russell Tompkins, Jr.) show you went to at the Arcada Theatre. If I remember correctly, you gave them a positive review.
I just heard an ad on Scott Shannon's show for November 25th at the New Jersey Performing Arts Center. Included on the list of performers was "Russell Tompkins, Jr. and te New Stylistics."
I guess there's two different Stylistics groups. Legally speaking, is that why he uses "New Stylistics" instead of "Stylistics?"
Frank B.
Yep - Russell split off to go his own way several years ago  (2000, believe it or not) and formed The New Stylistics.
A key part of their sound, I just couldn't imagine them sounding as good without him ... but "newcomer" (really?!?!  the guy's been with them for SIXTEEN YEARS now!!!) Eban Brown killed it the night we saw The Stylistics at The Arcada.
They explain it all in their own words on their website ... and check out the tour schedule to see if they're headed out your way.  You won't be disappointed.
As for the Russell Tompkins, Jr. version of the group, I'd love to see them, too, just for comparison's sake ... but as stated in my review (link below) I think the version of the group that we saw just may have "out-Russell'd" the original lead singer the night we saw them.
http://thestylistics.org/1.html
http://forgottenhits60s.blogspot.com/2016/10/the-stylistics.html

And, speaking of The Arcada Theatre, I just got word that Burton Cummings returns on April 21st.  Ron Onesti has also booked a double bill of Mark Farner (of Grand Funk Railroad fame) and Foghat for February 10th ... and Mary Wilson (of The Supremes) will be appearing there on April 29th ... so I'm already filling in "can't miss" dates on my 2017 calendar!!!  (kk)
There was a song played on the radio sometime during the summer of 1971 that consisted of these lyrics ... this is the refrain and I'm at a loss to remember the rest of the song lyrics to be able to put it together:
"I've seen the liars, I've seen the devil, I've seen my friends in disguise as my friends ...
I've got my fears, I've cried my tears, I'm a lonely man and I'm still waiting for the day" ...

I have searched endlessly for many years for this ballad type song ... no one seems to know what I am referring to ... yet it was impressed in my mind.  It had to have had some type of radio play as I heard it more than once ... could be a B side I suppose ...
If it sounded like anyone, I would have to say along the lines of "the Marmalade" and it was played on a top 40 station in Fitchburg, MA that summer before I went in the service.
This is the only song missing from my life's collection ... please help.
Thank you,
Ted Smith
Well, I'm pretty good on 1971 but I don't recognize this one ... so let's turn it over to the readers to see if they can help you track down a copy.  (kk)
Posted by Kent Kotal at 5:26 AM