Hooray for Sir Paul ...
He's putting on a show for the crowd and he asked that no phones be out.  The least people could do was leave them OFF.  This obsession with selfies, pictures, and peering at your phone during a concert, ballgame, or other event staged in front of large crowds is reflective of the vast majority of people who are so self-absorbed. Quite pathetic, I say.  If a performer / speaker says snapping pix is okay, go at it.  If otherwise, RESPECT the wishes of the person.

Hi Kent,
I’ve been looking at all the top 100 charts you’ve been posting lately and was wondering how many songs that enter the charts in the bottom 10 (position 91 - 100) ever make it to the top 10?
Has anyone ever researched this?
Matt
Nisswa, MN (summer)
Sun City AZ (winter)
My guess is … a whole bunch of 'em … but I don't have any hard statistics to back that up.  People research the charts from all sorts of angles so maybe somebody out there has a better handle on this than I do … it would be kind of interesting to see what percentage of "bottom 10" records eventually ended up as "top 10" records.  Anybody out there got any ideas on this one?  (kk)

I don't quite understand what Sirius XM and Billboard Magazine were going for with this week's special Hot 100 #1's special.


The idea was to play EVERY #1 Record, chronologically in order, beginning with the August 4, 1958 debut chart (featuring Rick Nelson's "Poor Little Fool") right on up to this week's #1 Record by Drake.  And it was all supposed to air on Channel 3, beginning at Noon Eastern Time on Tuesday, July 31st, and running straight thru Sunday Night, August 5th.


I couldn't wait to hear this thing and, since I'm usually at work for about ten hours per day anyway, figured this would be the PERFECT opportunity to catch most of it.


But guess what … it wasn't available on streaming!!!  It came thru loud and clear once I was in the car but I could not listen to it on the computer … which makes absolutely NO sense at all.  (Did they really think people were going to drive around for 300 hours to listen to this thing?!?!)


So instead I listened when I could but missed the lion's share of the broadcast.  What a dumb idea to turn a GREAT idea into such a convoluted mess!


And, to add insult to injury, I swear some of the songs they played were not the original hit versions of these #1 Singles!  (Or, at the very least, poorly done remixes that greatly altered the listening experience for one looking so forward to hearing this special.)


All in all, a bust for me … and yet another Sirius XM disappointment.  I am SIRIUSly reconsidering renewing my subscription to this service.  With the new car equipped for Bluetooth streaming, I may just make Rewound Radio my permanent go-to selection.  (Unless, of course, I can ever get to the dealer to see if he can upgrade my software to pick up Me-TV-FM!!!  That opportunity may FINALLY present itself later this month when I’ve got a few days off from work.)  kk


Speaking of Sirius XM, we told you about the special Beach Boys Interview coming up on August 10th, moderated by Rob Reiner.


Well, they taped it last night (July 31st) at The Capitol Records Tower and, by all accounts, the surviving members had a great and very amicable time laying this down.  (It was the first time they had all been together in the same room since their 2012 50th Anniversary Tour which, as we all know, ended poorly when Mike Love and Bruce Johnston split to continue their own Beach Boys thing, leaving the possibility of a follow-up album to their very successful "That's Why God Made The Radio" in the dust.


I will definitely be listening on the 10th … let's just hope they don't find a way to fuck this up, too!  (kk) 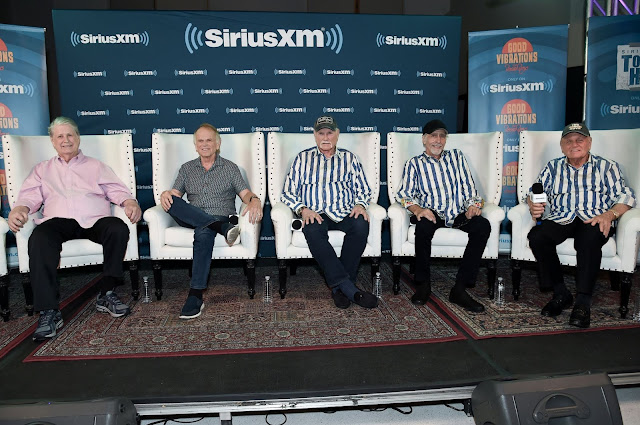 And, speaking of The Beach Boys, Endless Summer Quarterly, the premier Beach Boys Magazine has just launched a new website so we wanted to tell you all about it …

Hmmm … with all this extra "bandwidth," maybe David Beard will finally find a place to run my Al Jardine concert review since there wasn't enough room to fit it into the regular magazine itself!!!  (kk)

David Crosby made a complete ass of himself again this past week … oh wait, that's not news … we've come to expect it … by launching a wave of tweets denouncing the music of ABBA as "dog poop," thus enraging fans of the group, back in the spotlight again with the new "Mamma Mia: Here We Go Again" sequel film now in theaters and a virtual / hologram / avatar tour coming that will feature the first new ABBA music in over thirty years.

I don't quite understand it … neither Crosby, Stills and Nash nor The Byrds EVER had a single hit record with a song written by David Crosby.  Not a single one!  And this guy's flinging poop at ABBA, one of the most successful groups in music history?  What's up with that???

Some key phrases from the exchange:

Another participant wrote:  "ABBA is to music as plastic fruit is to food," while another said "ABBA were 'an act,' not 'a band.' And like any 'act,' they were slick, glossy, non-threatening pop tarts who only wanted to 'entertain you.' There was zero substance. There's a place for such acts: Vegas. Atlantic City, Hell ... "

Defending the group, others who were shocked to see Crosby's lack of appreciation for one of the best-selling artists of all time wrote:

"Starting to doubt your sanity -- great production and melodies -- lighten up!"

Another wrote, "Surprised at your tweet. Thought you'd have a much wider appreciation of music. ABBA had many great songs."

"ABBA is about as deep as a birdbath"  - David Crosby

But then questioned one of David's own songs …


I just found this in my house.  ALMOST EXACTLY 50 years ago, July 13, 1968, from the iconic Tower Records store in California!  How many of you picked these up back then??
Clark Besch 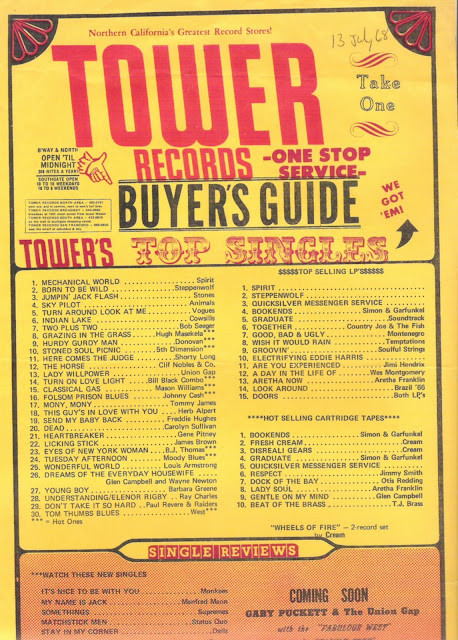 Hi Kent,
Isn't it crazy how two people can hear the same song and have two different reactions?
You mentioned that Sock It To Me, Santa reminded you of James Brown and to me, I instantly thought of Mitch Ryder and Devil with a Blue Dress.
Incidentally, in case I haven't mentioned it lately, FH is always nothing less than amazing. Thanks for doing this for all of us.
Bill
My reference was to the more obvious "Santa's Got A Brand New Bag" bit … but yes, there is definitely a Mitch Ryder feel to it … perhaps that whole Detroit "non-Motown" thing … and maybe the fact that Ryder also had a hit with the song "Sock It To Me, Baby" has a little to do with it, too!  (kk)

Joe Marchese of The Second Disc tells us that a brand new Bobbie Gentry CD box set, collecting all of her recorded material for Capitol Records, will be released on September 21st.
It'll be a massive 8-disc collection, featuring over 75 previously unreleased tracks, including demos, live performances, alternate takes, tv appearances and more … but, once again, NOT the reported 8-minute version of her biggest and best known hit, "Ode To Billie Joe." 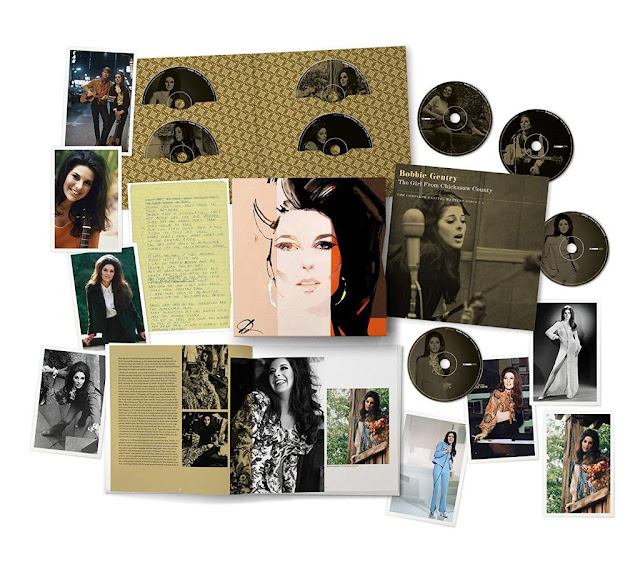 Again, if this much rare material was found in the vault, why not this much-talked about original version that has come up time and time again here in Forgotten Hits?
It just seems to lead to further (and, perhaps, more explicit) documentation that this track my not exist after all.  (kk)
More details can be found here:
https://theseconddisc.com/2018/07/another-sleepy-dusty-delta-day-bobbie-gentrys-complete-capitol-masters-collected-on-new-box-set/

Hi Kent,
I thought this was a good article about how Rock and Roll went from small ticket prices to high ticket prices.
http://www.latimes.com/entertainment/music/la-et-ms-1968-arena-rock-forum-madison-square-garden-20180420-story.html
In fact, I enjoyed it so much that I wrote to the author, Randy Lewis at The L.A. Times to tell him how I felt …
Hi Randy,
Great article.
It was great to see the whole evolution of ridiculous ticket prices in a very concise and fun to read piece.
I remember when the Steel Wheels tour came through the Minneapolis / St. Paul area … tickets were around $30. A Friend of mine wanted to go but her boyfriend didn't, so she sold me her extra ticket for half the price. I wasn't a big enough Stones fan to pay the full price.
I'm in a tribute band and we get $30 to $40 for a ticket and we squirm about it.
That still is a heck of a lot cheaper than the current Eagles prices, so I guess I won't feel too bad.
Thanks for a good read.
Bill Scherer
It looks like Randy has been on a roll with his looks back at the events of 1968 … there are links on this page to several other very interesting articles.  (Somebody should turn him on to our year-long 1967 series that we did in Forgotten Hits last year, recreating the year day-by-day … I think he’d get a real kick out of it!)
Thanks for sharing … I’m sure I’ll be back to read more of what he’s got coming.  (kk)