Where can you watch the tractor pulls, judge livestock and pies, spend millions on outrageous foods and then lose it all on an amusement ride that turns you upside down? At the country fairs of course! 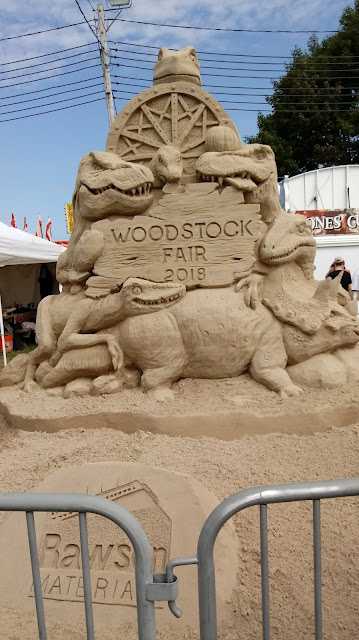 Here we are, in the middle of fair season, and I am in Woodstock, CT, to see The Lovin’ Spoonful in the “quiet corner” of the state at a fair that has been active AND dry for over 150 years. It is hot! It has been hot this summer, but there is a beautiful breeze now in front of the Main Stage. The opening band, Great Garage Band Reunion, starts at 7:00 … The Spoonful come on at 8:00 pm.

Great Garage Band Reunion all hail from northeastern Connecticut, except one. How he can be the hold-out in nearby Massachusetts may be baffling, but this band may have different incarnations and they talk about the latter ‘60s when they were in a Battle of the Bands with The Cowsills (who originated out of Rhode Island.)  Guess who won? If you can’t, please remember which of these two were the inspiration for a musical family TV show. Great Garage performs their choices of the BEST of the 60’s and 70’s. There are three guitarists, keyboards, drums, two trumpets, four saxes and a trombone today ... a full complement to share vocals and perform rocking tunes such as ‘Knock On Wood,’ ’Time Won’t Let Me,’ ‘Devil with the Blue Dress’ and ‘Some Kind of Wonderful.’  There are tributes to Paul Revere and the Raiders and The Monkees with audience participation and dancing. Wild, colorful shirts that make you think SURF even though we are as inland as Connecticut goes, bordering Massachusetts and Rhode Island. Well, we are pumped and since Joe Butler of The Spoonful, let us know at soundcheck, that they would do their “good songs” later, we are ready to receive.

Fifty-three years of being together as The Lovin’ Spoonful and, before that, years together in high school, make Joe Butler and Steve Boone lasting (unusually long lasting) musical partners. I watched them set up earlier, run through the sound check, and now restage themselves to perform a live concert. During all of the prep there is a seriousness and professionalism that emerges, that disappears like fairy dust as soon as they are introduced and begin singing ‘You Didn’t Have To Be So Nice.’ With Joe leaving drums and taking up the auto-harp, he also assumes the role of lead singer on most songs. When they move to their third song, ‘Nashville Cats,’ Joe loosens up even more and rolls his shoulders to the beat as he sings. It is the laid-back appeal of the Lovin’ Spoonful that personifies the 60’s folk rock imagery.

Steve Boone presents a quiet persona that startles each time he approaches the mic to relate stories and song derivations. He speaks with a strong, knowing voice that retracts like a turtle’s head when he finishes a tale and is absorbed back into the music. Seventeen songs are played and I cannot come up with a Spoonful hit that they missed. Oh yes, maybe they did miss one! I don’t remember hearing ‘Rain on the Roof.’  That song is sealed in my mind with John Sebastian’s voice so I wouldn’t want them to put it in. Speaking of Sebastian, Joe and Steve gave a touching tribute to John and Zal midway through the concert, highlighting the contributions of both of them and just how important the coordination of four individuals were in the creation of a successful unified recording and performing style. Another tribute to three people recently lost … John McCain, Neil Simon and Aretha Franklin … brings more applause and solidifies the performers and audience in memories and grief.

Ending with ‘Summer In The City’ and ‘Do You Believe in Magic,’ the Woodstock Fair closes for the night and just maybe allows some to connect with memories from a 1969 Woodstock Fair in another state. The current line-up of The Lovin’ Spoonful is a musically gifted, wonderful, tight performance. 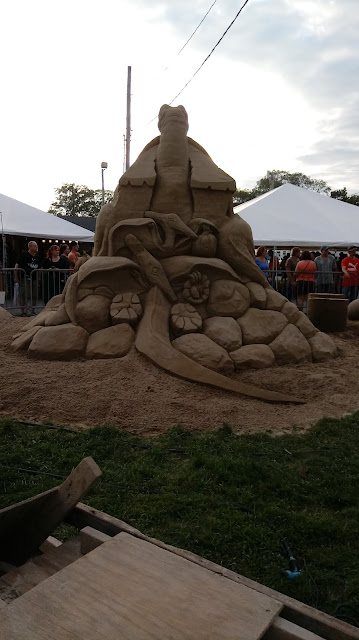 I have to end this review with a personal connection of mine. My ‘Best of The Lovin’ Spoonful’ LP was missing from my collection when I returned home from college. The only solution to this mystery was MY YOUNGER BROTHER. I went into his room and, not finding my record, took his ‘Partridge Family’ album. As I approached my brother, I said, “I am keeping this record until you return my Lovin Spoonful album.” His response?

“That’s ok, I don’t want that record anymore. Keep it.”

To my brother, I can now say, “That’s ok. I am now old enough to attend the concerts without asking permission, AND THEY ARE STILL TOURING.” Thank goodness for maturity.
Shelley Sweet-Tufano
Posted by Kent Kotal at 6:00 AM