When it comes to Guest Concert Reviews, this one is a real treat!!!

A few months ago, we were able to connect Barry Winslow of The Royal Guardsmen with Tommy James, who was performing in concert in Branson, Missouri last weekend.

What is ESPECIALLY cool about this one is that The Royal Guardsmen and Tommy James and the Shondells toured together in 1967 at the absolute peaks of their careers ... and haven't seen each other since.

(While The Royal Guardsmen have pretty much been written off in Rock And Roll History as not much more than a novelty act with all their "Snoopy" hits, Tommy James has continued to entertain audiences all over the world for the past 50+ years.)

So it was cool to have Barry in the audience that night and then hook up with Tommy after the show for a brief bit of reminiscing.

Here Barry tells us all about it ... and has even provided a link to watch that very concert for yourself in the comfort of your own home!!!

I only have a couple of pics (I'm so sorry ... the phone camera just wasn't working), but I'll send what I have.

Tommy and I had a really great reconnect at the meet and greet.  We'll be chatting a lot now, all thanks to you, my friend.

As for an actual review, I was SO glad we got to see Tommy.  He was playing at the Welk's Theater in Branson, MO.  They were awesome, my friend.  Tommy had the folks one minute into the show ... and brother, he did a show!  The band was tighter than a hair on a biscuit ... sounded better than ever.


One of his new takes on a song was outstanding.  He did "I Think We're Alone Now" "unplugged" ... and it was beautiful ... slowed down and intimate.

Tommy played to a packed house and the evening was filled with tons of standing "O's" ... the crowd was up on their feet as their favorite song(s) came up.

And may I say that he truly cares about his fans.  He is a true gentleman.

His show ran about an hour and a half ... and after a short breather, he came out for the meet and greet ... THREE HOURS WORTH!  He spent all the time that was needed for each person. Tee and I were at the tail of the line ... and it was after midnight before we got to chat.

I'm so sorry our camera died ... got this one pic with him ... but the best shot would have been the look on his face when I told him that we toured together ... it was wide eyed and shocked ... LOL ... he remembered ... it was great!  We both wanted to chat some more even though we were both worn out ... us old guys, you know! ... but we're connected again ... and it's all thanks to you, my friend.

Oh, we had a ball, Brother ...wish you could have been there!

I hope the stream URL posted above will make up for our loss of pics.

Again, thanks, Kent -
Bless ya, my friend
Barry 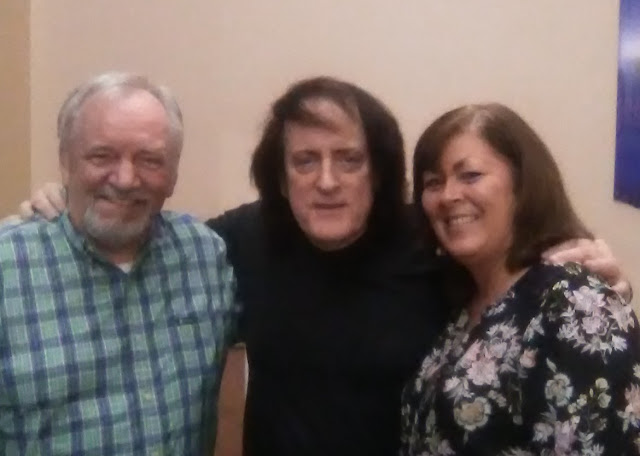 I have never seen Tommy put on anything other than an outstanding show.  He loves what he does ... and sounds every bit as good today as he did back then.

In fact, locals on the list can see Tommy perform THIS SATURDAY NIGHT ... September 22nd ... at The Arcada Theatre!!!  But you'd better already have your tickets ... 'cause this show is SOLD OUT!!!  (Tommy sells out the Arcada every time he plays there!  In fact, Ron Onesti just put up some "Standing Room Only" tickets for those who don't want to miss this show!)

And you can catch Tommy's Sirius/XM Radio Show "Gettin' Together With Tommy James" every Sunday Night on 60's on 6 from 5 - 8 pm Eastern.
https://www.siriusxm.com/60son6
Posted by Kent Kotal at 6:00 AM