9-21-68 - WJAK - Jackson, Tennessee
This city in western Tennessee boast a modest 68,000 people and in 1968, may well have been more famous for the song "Jackson," which was a big hit just a year earlier.  The "Big Jak Hit Pak" survey this week 50 years ago followed the national trend of smaller playlists, going top 30 only.  It had its share of personal faves, however.

One was Dionne Warwick's #10 hit, "Who Is Gonna Love me" (mis-titled on the chart) which was actually a two-sided Bacharach - David winner, nationally, with the currently better known and much more recorded flip (a charter on last week's look back survey from KTKT!), "Always Something There (To Remind Me)."

Another song which spread a story was #22's "Birmingham" by the Movers.  I first heard this as a "Rate-a-Record" tune on American Bandstand and instantly liked it.  The tune was written by our own FH star Tommy Roe (with Freddy Weller)!  It did not hit big, but somehow would seem to have inspired a followup tune written by Delaney Bramlett and Mac Davis in 1969, "Hello L.A., Bye-Bye Birmingham!"  It actually WAS the Movers' followup single, too!  Despite all the hit artists (Blue Cheer and Nancy Sinatra recorded the latter) involved here between the two songs, neither became hits.

This very primitive looking chart (it looks like the logos and red borders are pre-printed ... and then each week's new chart is typed into this space (obviously in a "whatever will fit" method, at which they fail in several areas!!!)

Yet there's still room for The Bee Gees, Dionne Warwick, Sergio Mendes, The Vogues and The Association ... go figure!

A couple of Forgotten Hits stand-outs on the chart week ...

We've got the Don Fardon version of "Indian Reservation" sitting at #9 ... this one was also a Top Ten Hit here in Chicago ... and the #29 Hit "Shape Of Things To Come" by Max Frost and the Troopers was the very first Forgotten Hit we ever featured back in 1999!

"Revolution" is once again shown as the A-Side of The Beatles' new single ... and two songs that would go all the way to #1 here in Chicago (where "Hey Jude" only topped the chart for a week!) are also climbing the chart ... "Fire" by The Crazy World Of Arthur Brown" and "Over You" by Gary Puckett and the Union Gap sit at #'s 18 and 19 respectively.  (kk)

Wrapping Up A Week Of Killer Reviews ... With One Of Our Own ... A Brand New Show Featuring Jim Peterik!

Last Sunday (September 16th) we attended a very special, “by invitation only” showcase entitled “Jim Peterik – A Career Retrospective:  Through The Eye Of The Tiger,” a program Jim hopes to take on the road all over the country next year. 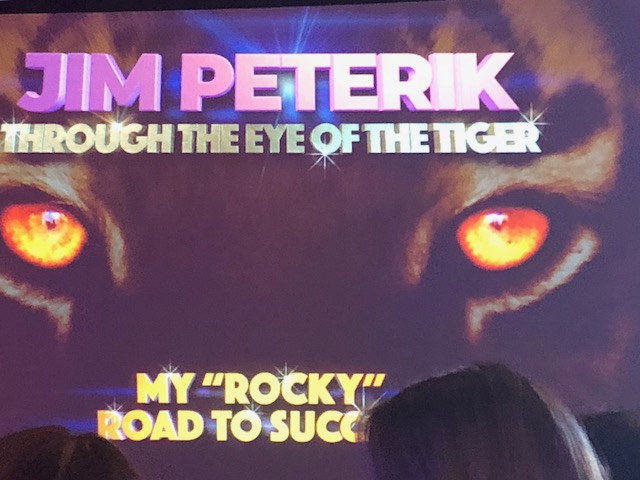 Essentially a one man show (although we all know there are many moving parts behind the scenes), the program features Jim center stage with just an amplified acoustic guitar (hey, isn’t that an oxy-moron?),  discussing every aspect of his career … from his very first taste of success with The Ides Of March in 1966 (“You Wouldn’t Listen” … OMG, he even played “Like It Or Lump It” live on stage … I don’t think I’ve EVER seen that before!) through the worldwide explosion of “Vehicle” (where the audience got to sing all of the horn parts and background vocals) and on to the days after the Ides broke up and Jim was singing jingles (he even samples a few!), where he met Dave Bickler and ultimately formed Survivor, at which point he soared to even greater success with eight more Top 40 Hits, including “Eye Of The Tiger,” one of the biggest hit records of the past forty years.  (Naturally, he also tells the story of the magical phone call he received from Sylvester Stallone, asking him to write a song for the next “Rocky” movie … a phone call that forever changed his life.)

All of this is complimented by an on-going slide show that also features video performances of key highlight moments in his career.  (Dick Clark featuring “You Wouldn’t Listen” in the spotlight dance on “American Bandstand” … and other artists like Tom Jones, Sammy Davis, Jr. and Bo Bice covering “Vehicle” on television.) 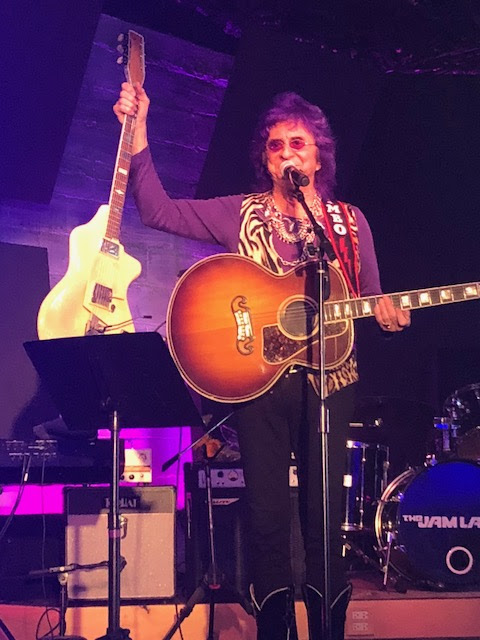 PHOTO of JIM WITH HIS VERY FIRST GUITAR … 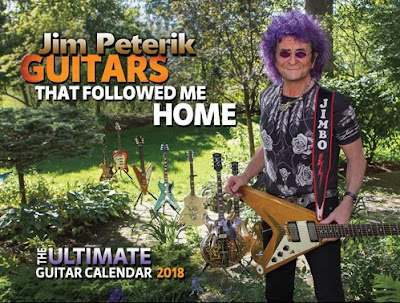 Jim is a very entertaining story-teller, and while the stage show makes for the perfect companion piece to his autobiography of the same name, there is something about hearing these stories again performed live (with musical accompaniment) that really brings this program full circle.  (He also sampled a couple of hits that he has written for other artists, such as Sammy Hagar and .38 Special.)

But it’s not just about the music.  Jim also discusses personal highlights, recounting how he met his wife of nearly fifty years, Karen … the birth of their son Colin and, more recently, a brand new grand-daughter (with a grandson on the way!)  There is no question that Jim feels truly blessed by the life he’s been allowed to lead (thanking Great God In Heaven on a daily basis, I’m sure) … but the presentation is also highly motivational in encouraging viewers to never give up on their own dreams … and he is living proof that dreams DO come true.

Unbeknownst to us at the time, the entire proceedings were video taped for future DVD release, which will be sold at these future gigs as a souvenir show memento, as well as thru his website for those unable to attend one of his concert performances.  (In addition to his book, it’ll make for a great way to relive the show.)

Our presentation was MC’d by Mancow (who tells us that he’ll be back on the air here in Chicago next month … and is clearly a HUGE Jim Peterik fan and friend.)  In addition, we had the special bonus element of having The Ides Of March join Jim on stage to perform the background vocals on their #2 local hit “L.A. Goodbye” … a treat that won’t be shared in this brand new road show. 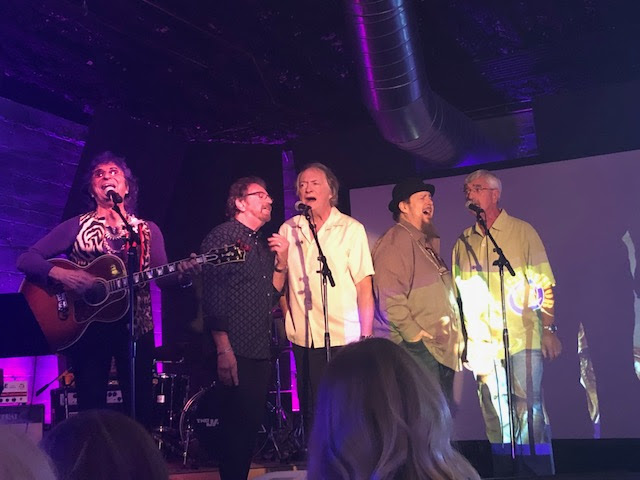 I have to give Jim major props at all of the new ways he finds to continue to present his catalog to his fans.  (More recently he reimagined his music with all new arrangements … and now we’ve got this brand new career retrospective that is entertaining and enlightening from start to finish.)
We’ll keep you posted as show dates are added. 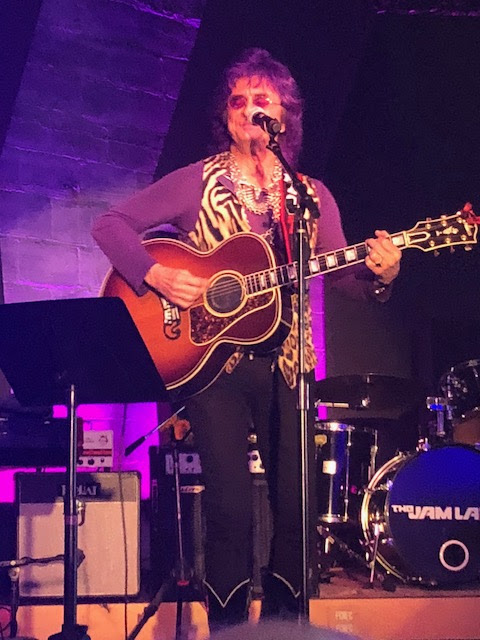 Meanwhile, you can catch Jim Peterik in concert (both with The Ides Of March, as part of The Cornerstones Of Rock and in another presentation of his World Stage) here through the end of the year:

November 2nd – Cornerstones of Rock – The Genesee Theatre – Waukegan, IL (featuring The Ides Of March, The Buckinghams, They Cryan’ Shames, The New Colony Six and The Shadows Of Knight)

November 24th – Cornerstones Of Rock – Arcada Theatre – St. Charles, IL (featuring The Ides Of March, The Buckinghams, They Cryan’ Shames, The New Colony Six and The Shadows Of Knight) 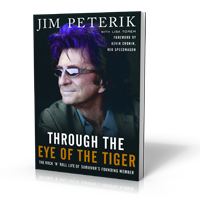 Frannie was able to get some great shots of the show … so we’re sharing a few of those with you today!  (Thanks,  Hon!) kk