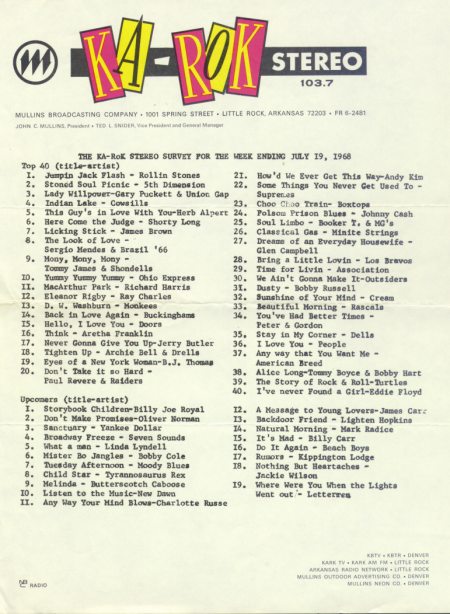 
Thanks again, Freddy and Ron Onesti, for a GREAT Sunday Evening of Music at The Arcada Theatre.  We’ve been pushing to bring Freddy to Chicago for several years now and I remember promising him after his open heart surgery a few years ago that I would somehow, someway, make this happen … so thank you, Ron, for allowing us to enjoy such a fun-filled, great night of music.

I met so many Freddy Cannon fans after the show, many of whom who thanked me for my part in making this happen.  It’s probably been decades since Freddy last played Chicago and the crowd loved him.

To one woman in particular who I talked to in the lobby afterwards but then never got to see again before we had to leave … I hope by some chance she’s reading this … (Ron - you may want to mention this to your staff as I think she was one of your ushers) ...

You had shared a special memory with me about watching Freddy on American Bandstand back in the day … and remembering a girl who you thought was named Myrna Horowitz, who was the President of the Freddy Cannon Fan Club.  You said that Dick Clark interviewed her a couple of times and that you thought she had some type of handicap … polio maybe … and just wanted to make sure your memories were intact.

Well, I did get a chance to ask Freddy about this … and he confirmed that your memories were spot on.  (Freddy appeared on Bandstand over a hundred times back in the glory days of Philadelphia!)

YES, MYRNA … SHE WAS A BANDSTAND REGULAR … DID A LOT OF PROMOTION FOR ME BACK THEN.  A VERY NICE GIRL AND YES, SHE HAD POLIO.
FREDDY

If you get to see and meet Freddy, could you say hi to him from his chauffeur in England, Rockin' Lord Geoff
Take care,
Geoff
I certainly did … and of course he remembered you immediately.  As you already know, Freddy is still IMMENSELY popular in England … and sells out concert halls every time he plays there.  (He told me that his lastest single “Boppin’ The Blues” is climbing The British Charts right now!)

There seems to be a much greater appreciation of the early rock and roll artists in The UK than there is here at home … in fact, we ran a piece yesterday spotlighting the fact that Charlie Gracie is back over there again right now! (kk)


Told you he is a great fella to know and so is Jeanette. Glad you enjoyed the show.  Similar to what he did earlier in the year at Hemsby, but you didn’t mention Buzz, Buzz A Diddle It … did he not sing that one? My favourite and, as he told me on more than one occasion, his second favourite after Tallahassee Lassie which, of course, is Jeanette.
Like I said, a great man … glad to be able to call him friend.
Take care,
Rockin’ Lord Geoff in England
I don’t recall him doing “Buzz Buzz A Diddle It,” but he was playing with a band he’d never performed with before, so they may have stuck to the more “tried and true” material.  Still, a great show all ‘round.  (kk)

Thanks for your great review of the Freddy Cannon Doo-Wop Concert – I wish I could have been there to see it.
It isn’t often that a big league star like Freddy would take the time to acknowledge and thank somebody from the audience like that – and then even bring that person up on stage at the end of the show.  The fact that he would go so far as to repeat a song is a true testament to this moment being especially for you – because YOU were the one that put his original demo record back in his hands.  It looks like you have touched each other’s lives.  Here’s to many more years of rockin’ for the great Freddy “Boom Boom” Cannon!
Don
While I think that some of what you say may be true, probably a more realistic reason for repeating the song was because the band hadn’t prepared any more material than what they had put together on such short notice.  Truth be told, the first couple of numbers were a little bit rough and Freddy seemed a little bit nervous … but everything came together after that and it was a fun rock and roll show.  (It's gotta be tough putting together a show like this where the artists hook up with a local band with minimal rehearsal time.)
As for the record, I was simply the conduit that made it all happen.  We have to give proper credit to FH Reader Eric Lee, who actually FOUND the record in a stack of old 78’s he was given by a radio station … and recognized it for what it was.  Because he knew Freddy and I were in touch with each other, he simply asked for my help in finding out if Freddy would be interested in having it.  Eric easily could have sold the record for a substantial amount of money being the absolutely one-of-a-kind collectible it truly is … but he wanted to offer it to Freddy first.  (Scroll back to read the complete story on how this all came to be by following the original FH links provided if you’re not already familiar with the story.)
Regardless, there is NO doubt about how much that record means to Freddy … and that’s the REAL reason he showed his appreciation Sunday Night.  I was just SO pleased to be a part of it … and for helping him retrieve this long lost, long forgotten gem.  (kk)

What fun that must have been Kent ...
And a well deserved honor for you❗️
Phil

Kent,
A true pinch me moment for sure!
Will look forward to going to the next Doo-Wop shows.
Art

Kent,
We were in the audience of Sunday's doo wop show and I snapped some pics of you with Freddy.  Here they are.
Cary J. Hahn
Cedar Rapids, Iowa 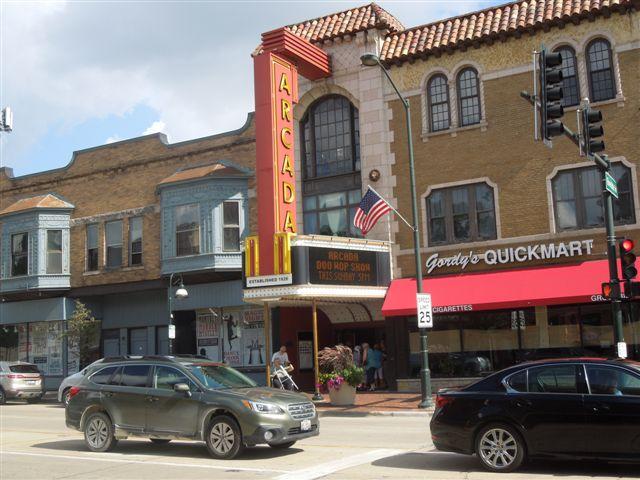 A view of the venue / marquee 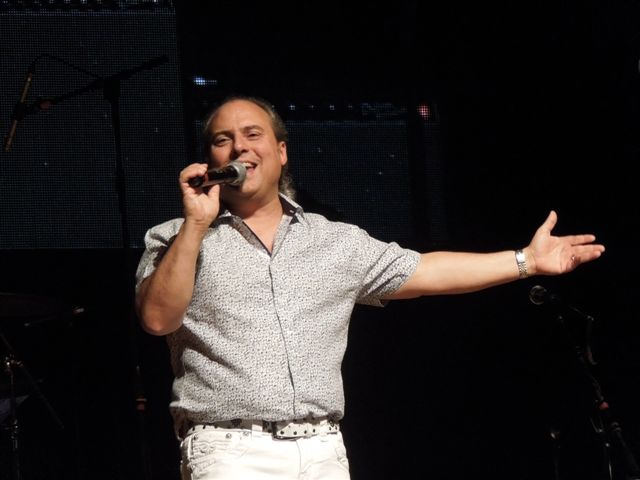 The hostest with the mostest ... Emcee Ron Onesti ... who runs the joint! 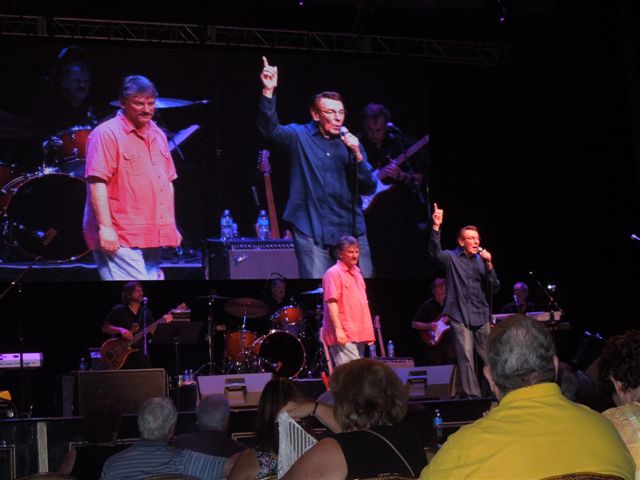 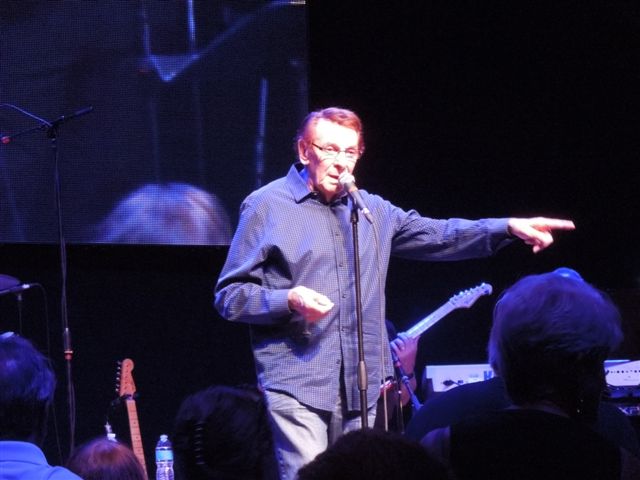 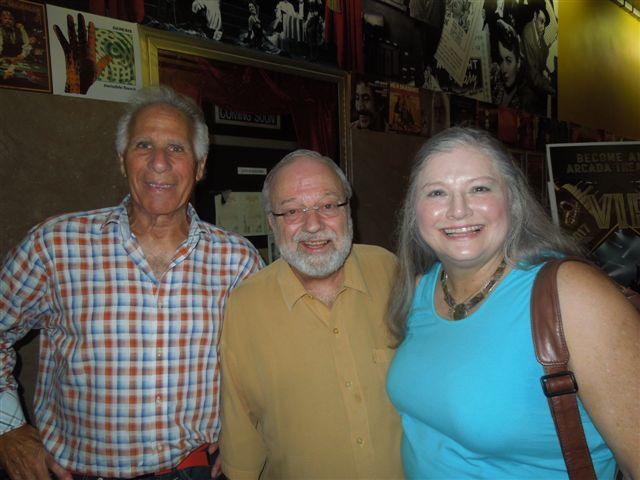 Jay Siegel (of the Tokens) with Cary and Jean Hahn of Cedar Rapids, Iowa

Hi Kent,
GREAT write up about Freddy Cannon, one of the legends! And what an honor for him to bring you on stage to thank you for all you do to promote him and his music!
Good to see Bob Abrams is playing background music. He is a fantastic guitar player and I always remember how good he was with the Buckinghams.
Carolyn 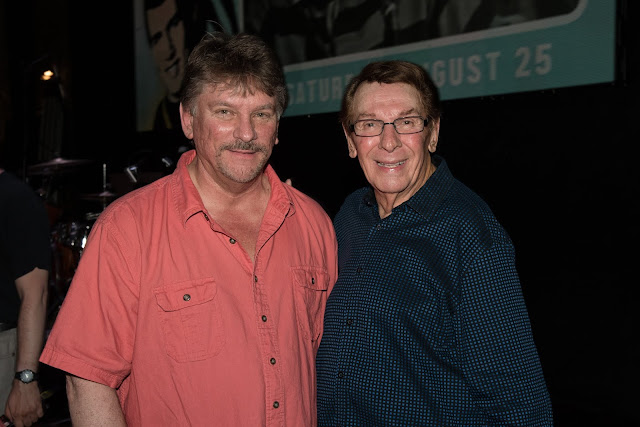 And it’s about time!!! (lol)  Thanks, Tom … and for all your assistance in this regard over the years!  (kk)

Then again some saw the photo opp  a little differently …

You've made the big time. You got your picture taken with Svengoolie.
Jack 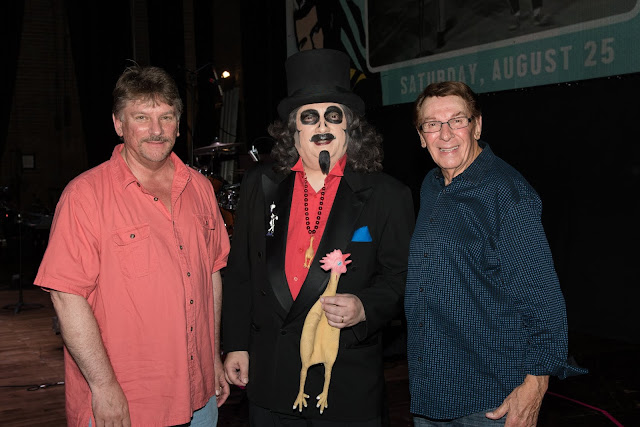 Probably just a slightly bigger honor for me than for him!  (kk)

I dunno …
Maybe it's your Tuff Guy Expression here!
Maybe it's the Color of your shirt!
Maybe it's Both together!
But ~~~ 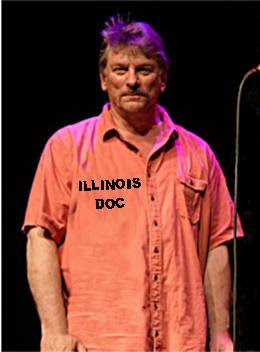 Chuck Buell
OK, I guess I deserved that!  (lol)  Thanks, Chuck.  (By the way, new episodes of "Orange Is The New Black" start next week on Netflix!)  kk

Great stuff, Kent!
Peter Noone
I was very moved by your piece today, probably because I'm such a huge Freddy Cannon fan and am so happy he's still performing.
I agree with your assessment of him up against some other stars of his era.  Some of his songs were historical and some were quirky and all were catchy ... he's just one of a kind.
If you ever want to send him to Fredericksburg, VA, I'd like to be in the audience.  Thanx!
Patti

KENT,
THANK YOU FOR THE KIND WORDS ABOUT JEANETTE AND MYSELF … AND THANKS AGAIN FOR ALL YOUR HELP.
IT WAS SO NICE TO MEET YOUR WIFE.
AGAIN, THANKS FOR COMING TO THE SHOW AND THANKS FOR COMING ON STAGE … AND FOR GIVING ME A GREAT REVIEW!
(YOU KNOW YOUR ROCK AND ROLL VERY WELL!)
IF AND WHEN IM BACK AT THE ARCADA, I HOPE YOU BOTH CAN BE THERE AGAIN.
TAKE CARE AND KEEP ROCKIN’ -
YOUR FRIEND,
FREDDY “BOOM BOOM” CANNON 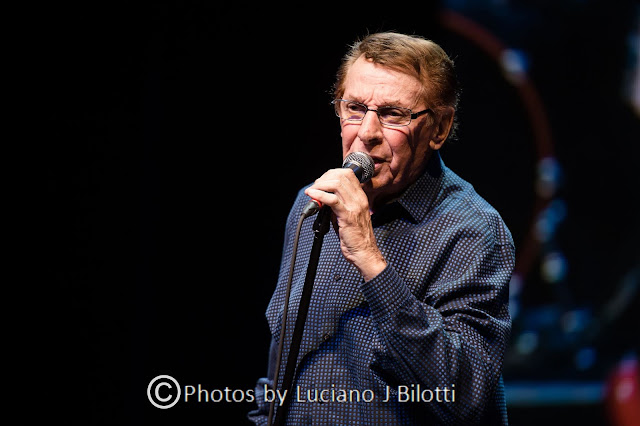