If you've been to Yellowstone National Park, chances are you've visited Cody, Wyoming, on the eastern outskirts of the park.

Way out west, our FH heroes are getting airplay, but the obvious theme of this station was geared around Coca-Cola!  Most likely, you heard the Coke jingles blasting much of the time on KODI.  Without much obscure music on this chart, how about some of the Coke jingles that may have been waking Old Faithfull geyser hourly by artists holding this week's #1, #18 and #23 positions with current national hits.

The American Breed one is also featured with FH member Chuck Buell's outro on WLS in late 1968 and it would become so popular that the Breed would eventually make a full song out of it and put out as a single later in the year!

BTW, for those of you at home keeping score, that's two weeks in a row that we did not move the AM dial.  This week and last week we featured stations located at 1400 on the dial!
-- Clark Besch 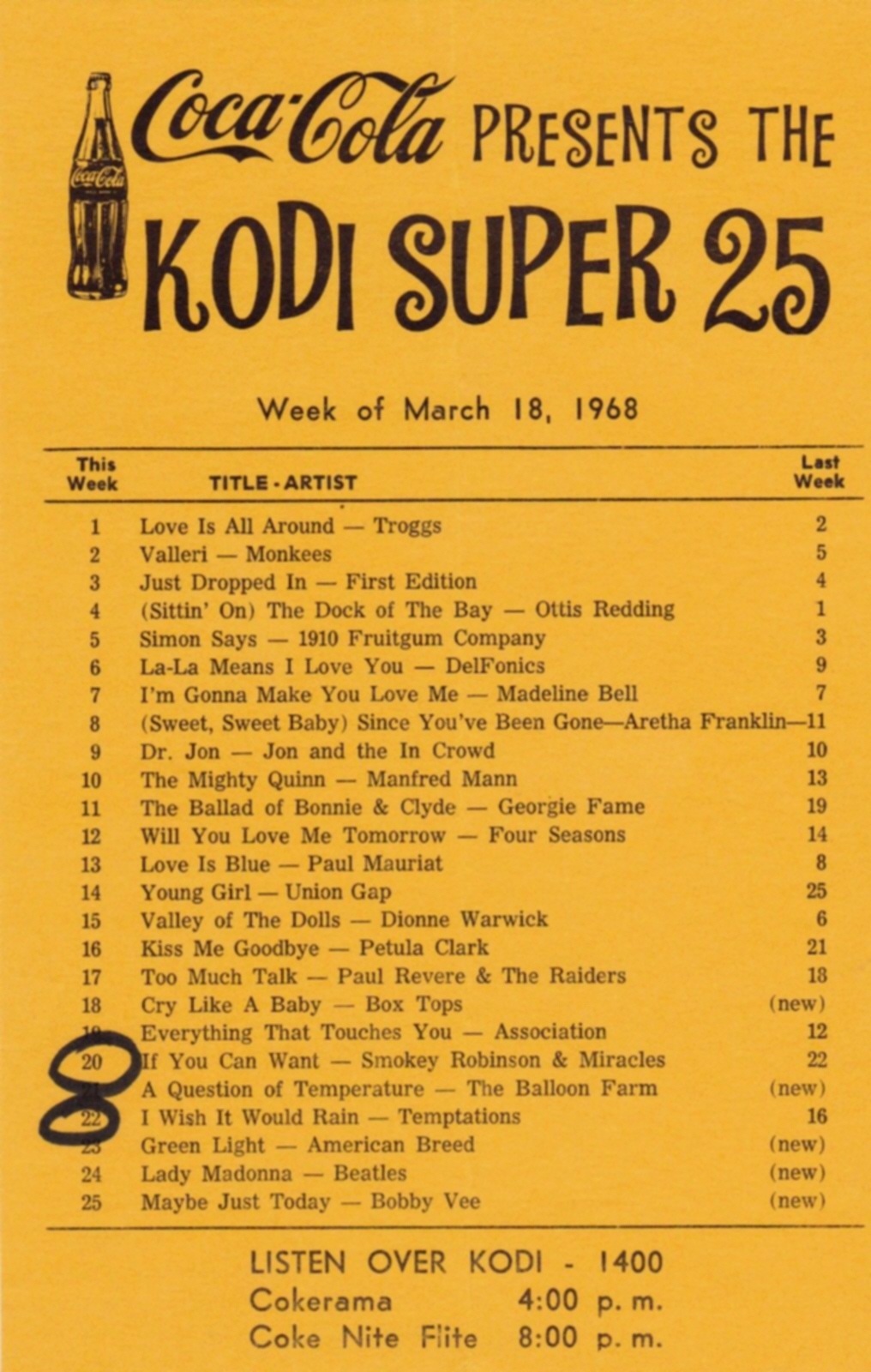 Yep, LOTS of Coke references on this week's chart!  "Lady Madonna" is brand new at #24 for The Beatles ... and Otis Redding's (spelled here with two T's) falls from #1 to #4 with "(Sittin' On) The Dock Of The Bay," allowing The Troggs to take over the top spot with "Love Is All Around," just ahead of The Monkees' "Valleri."

Madeline Bell's version of "Im Gonna Make You Love Me" is a Top Ten Hit here in Wyoming, too, so again I'm surprised by its  somewhat meager #26 showing in Billboard.  You'll also find "Dr. Jon" and the In-Crowd in The Top Ten this week.  We featured that tune a few weeks ago in our Saturday Surveys Series.  (kk)


THAT WAS THE WEEK THAT WAS:

Here are some of the musical events that took place this week in 1968 ...


3/20/68:  Now that’s a party … Eric Clapton and Neil Young, along with Richie Furay and Jim Messina of Poco, are all arrested for “suspected drug use” at the home of Stephen Stills in Los Angeles.  (Clapton will be freed while all of the others are fined.)  Maybe Stills wasn't home???  He isn't mentioned at all!!!

3/24/68:   Lots of music tonight on The Ed Sullivan Show … Spanky and Our Gang perform “Like To Get To Know You,” Diana Ross and the Supremes perform “Forever Came Today” and Nancy Sinatra both solo (“100 Years”) and with her Producer Lee Hazlewood (“Storybook Children”).  Jimmy Dean is also onboard to sing “To A Sleeping Beauty.”

This And That:
Big show this weekend as Burton Cummings returns to The Arcada Theatre for two shows.  Friday Night’s performance is a complete sell out but there are still seats available for Saturday Night.

This time around, it’s just Burton at the piano … up close and personal … telling stories and playing all the songs you love and know by heart!

Get your tickets now before they’re gone …
https://www.etix.com/ticket/p/7445198/burton-cummings-324-stcharles-the-arcada-theatre

(Burton has made our Top 20 Concerts List EVERY year we’ve ever done one … so don’t miss your chance to see this rock and roll legend.)  kk

For once I seem to agree with the general consensus. While I'm sure Cousin Brucie was really cool 50 years ago, when this survey was published, this is 2018 and what was funny then isn't funny the next few thousand times you hear it. The same goes for Dick Biondi. Sad to say, but I think it's time for Dick to ride off into the sunset. Have a week of shows with guest appearances from other jocks he worked with over the years and say goodnight Dick. Like a lot of music acts, sometimes you have to know when it's time to pull the plug.
Jack

Oh cool ... and a 1968 chart no less!!!  (Be sure to check out The Saturday Survey as this week we travel to Wyoming as we make our way across all fifty states in this brand new 50 Year Flashback Feature!)

I clicked on Sirius XM’s 60’s on 6 on the way home from work Wednesday night and found Ronnie Rice on the phone with Cousin Brucie!  Unfortunately they got cut off so they never really had a chance to talk … and shortly afterwards, Brucie went into a pre-recorded program so there was no chance for Ronnie to call back and get Brucie back on the phone.  (It was just SO weird to hear that after all the talk this past week about Cousin Brucie’s show!)  kk

I lost interest in listening to Cousin Brucie many years ago. During one of the early Radio Greats weekends on WCBS-FM, he told a story about a black lady who, in the 1950's when he was an upcoming radio dj, said to him, in her singsong speech impediment, that she loves listening to his show. It was in the EEE, EEE, EEE, EEE, voice. I was appalled when he told all of New York, New Jersey and Connecticut and other states that picked up WCBS-FM, that's where he got his EEE, EEE, EEE, EEE from. A nutty former co-worker who loved the Cuz, thought I was crazy after I turned 50 many years ago and I told him I can no longer stand him saying EEE, EEE, EEE, EEE. A couple of years later, after this co-worker turned 50, he knew what I meant. After a certain age, some things dj's say or do becomes very annoying.
Arlene Schwartz

In addition, the brand new "Days Of Future Passed" Live Concert film (out this Friday) will play non-stop throughout the day in The Foster Theater.


Shooting a couple of quick angry glares at Forgotten Hits Readers Frank Buongervino, Jr. and Phil Miglioratti …
Thanks to these two guys, "The Monkey's Uncle" has been playing non-stop in my head, 24/7, for the past week and a half now!!!  (I wouldn't wish this on ANYBODY!!!)
While it was kind cute the first 3000 times it played, I'll be certifiably insane if this keeps up much longer!!!  (kk)

kk …
Do you know the last song ever performed by The Everly Brothers?
Good trivia question … I never would've guessed it.
https://www.youtube.com/watch?v=aNxjIapehgc
FB


I also did not know about the relationship between Dale Hawkins and Ronnie Hawkins. Probably in the past I might have imagined if they were related in one way or another.
What a rocker MARY LOU by Ronnie Hawkins is. You may or may not know this, but the song came out earlier in 1955 by a singer from Los Angeles … I believe by the name of Obadiah Jesse, who recorded under the name of Young Jesse. Also, when I say the name Ronnie Hawkins, it reminded me of the Bo Diddley tune WHO DO YOU LOVE which Hawkins recorded in 1963 and was a huge hit here in OKC.
Larry Neal
Here’s a great line attributed to Ronnie Hawkins …
“I’ve been around so long I remember when The Dead Sea was only sick!”  (kk)

And from the always entertaining and amusing Chuck Buell …

Movie News ~~~
A British moviegoer was at the Vue Cinema in Birmingham, England, when he was trying to retrieve his cell phone that he dropped between some seats.
When he was down on the floor looking underneath the seats, the electronic recliner's footrest shifted from the extended upright position to the lower recessed position wedging his head and trapping him.  While others struggled desperately to break the footrest away and free him, the man panicked and suffered a fatal heart attack.
If I HAD a show, I would say, "Well, we're all familiar with the pre-movie announcement to silence our cell phones. This is the first time a cell phone has silenced a movie goer!
Chuck Buell ( Your Personal Show Prep Service! )

Helping Out Our Readers:
Kent,
Not sure if you can help me with this or if you are still doing forgotten hits or b-side songs, but I am trying to identify a b-side song and could use help.
It was circa 1960.  A friend of mine and I were walking to a party.  I was around 12.  We were carrying our 45s.  On one of my 45s, the B-side song was really stupid and I was taking the 45 to the party more to get laughs than to play the A-side.  It may have been the flip side of Freddy Cannon’s Palisades Park, but I am not sure.  Anyway, I sang the stupid little ditty for my friend and he took my 45 and sailed it down the street like a Frisbee.  Not sure if it was the song or my singing that caused his reaction but regardless, it was gone for good.  (I would have punched him, but I was smitten by his twin sister who looked a little like Pat Benatar and if I had any chance at her, I couldn’t whale on her brother.)
Anyway, I digress.
I just turned 70 and I still can’t get this incredibly stupid song  from 58 years ago out of my mind.  It was sung in English but with a strong Mexican accent.  To make matters worse, I have a way of mis-interpreting lyrics I hear and don’t see in print.  Case in point:  for years I thought the song Maneater was Magnito (just never understood how something that would cause a spark could “chew you up”).    I say this because what this singer calls his lover sounded to me like “my guyeena” but could have been my chiquita or some other word entirely.  Not a lot to go on when searching,

Here are some of the lyrics.

My guyeena
My guyeena
She’s so mean to me, tweedley-dee
But I love her
Yes I love her
And I think-a she like me.
Anyway, that is what I am looking for.  Not sure if you can help.  If not, I hope my request at least gave you a chuckle or two!
Tom Huth
Not only are we still doing Forgotten Hits, but we're also still doing our "Helping Out Our Readers" segment … so while I don't recognize this one at all (other than to say I doubt that it's the flipside of "Palisades Park"), my guess is that somebody else on the list WILL recognize this ditty and be able to point you in the right direction.
Let's see what comes back from the bleachers.  (kk)