We had the EXTEME pleasure of seeing a new musical here in Chicago this past weekend ... SHOUT! The Mod Musical is a whimsical, song-filled look back at OUR favorite decade ... The Swingin' '60's, London-Style. I had absolutely NO pre-conceived notions as to what to expect (as I had heard very little about this production) ... and I have to admit that I was TOTALLY charmed ... and we absolutely LOVED the whole experience!
The entire cast consists of just five young women growing up in the '60's in the heart of Jolly Ol' London ... back at the time when England truly DID swing like a pendulum do. (The cast that we saw included LAUREN CREEL as BLUE GIRL, MEGAN LONG as RED GIRL, AMANDA DANSKIN as GREEN GIRL, MAGGIE PORTMAN as YELLOW GIRL and AMY STEELE as ORANGE GIRL) and they were augmented by a stripped down three-piece ensemble band (two keyboards and drums) ... yet when they put it all together, they COMPLETELY filled the small DRURY LANE THEATRE in Chicago's WATER TOWER PLACE with powerful musical performances of some of our '60's Female Vocal Favorites!
While the play features TONS of music, it's a little short on dialog ... preferring instead to feature more "monologue" type vignettes and short soliloquies that move the story along ... some very reminiscent of those old LAUGH IN Party sequences where everything "freezes" just long enough for one of the actors to get off a quick one-liner. All in all, it's a VERY fast-paced 90 minutes of non-stop fun and music ... and I HIGHLY recommend it to anyone who fancies this particular musical era. 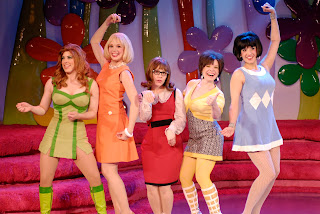 I was also quite surprised to find that a virtual songbook of TONY HATCH material was featured: DOWNTOWN, I KNOW A PLACE, DON'T SLEEP IN THE SUBWAY, COLOUR MY WORLD, I COULDN'T LIVE WITHOUT YOUR LOVE, A SIGN OF THE TIMES, ROUND EVERY CORNER, WHO AM I and DON'T GIVE UP ... all PETULA CLARK Hits from the mid''60's ... are prominently performed to GREAT effect throughout the play. Along the way, we were ALSO treated to stand-out performances of the DUSTY SPRINGFIELD classics ALL I SEE IS YOU, I ONLY WANT TO BE WITH YOU, WISHIN' AND HOPIN', YOU DON'T HAVE TO SAY YOU LOVE ME and SON OF A PREACHER MAN, a fun send up of GOLDFINGER (done here as "COLD"FINGER), LULU's TO SIR WITH LOVE and the title track, SHOUT, MARY HOPKIN's THOSE WERE THE DAYS, NANCY SINATRA's THESE BOOTS WERE MADE FOR WALKIN' and several other favorites of this same genre. 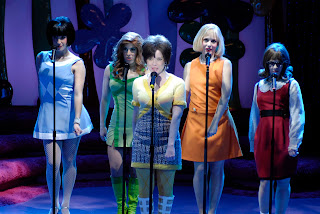 While ALL of the girls gave stellar performances, I was partial to LAUREN CREEL (as BLUE GIRL), who brought us all to laughter with her take on DON'T SLEEP IN THE SUBWAY and then to tears with her gut-wrenching performance of the CILLA BLACK Hit YOU'RE MY WORLD, done to GREAT effect as a medley of sorts (a COUNTER-melody to be more accurate) with the DUSTY SPRINGFIELD Hit ALL I SEE IS YOU. (That one TOTALLY choked me up, a feeling I shared with LAUREN during a brief "Meet And Greet" in the lobby after the performance. She confided that this part of the show gets to HER sometimes, too!!!)
All-in-all, HIGHLY RECOMMENDED ... but if you want to see it, you'd better act FAST!!! Whereas I had heard a couple of weeks back that the show had just been extended for its Chicago run, I understand now that the FINAL Chicago Performances will be held on June 29th. (That doesn't leave you with a whole lot of time to catch it before it skips town ... but if you ARE able to attend, it's WELL worth the trip downtown!!! Top the evening off with dinner at ED DEBEVIC's and you're sure to have a SWINGIN' '60's time!!! WE were fortunate enough to score tickets for the final performance that evening ... and that's EXACTLY what WE'RE going to do!!!)

And there's MORE good news on the SHOUT! front, too ... SHOUT! is now appearing Off Broadway in New York, in Great Britain and all over Japan ... and plans are in the works right now to bring the show to Las Vegas! (If they can pull it together in time, FRANNIE and I will go see it again when we hit The Strip for our anniversary in November!)
If you happen to have a night free between now and the 29th of June, here's a link to THE DRURY LANE THEATER ... as well as worldwide ticket information:
Click here: Drury Lane Water Tower - SHOUT!
Click here: SHOUT! The Mod Musical

Because we've got songwriter TONY HATCH on our FORGOTTEN HITS Mailing List, I just HAD to ask him what HE knew and thought about the show. Here's the response I got ... along with the promise of a further review after he sees the British performance next week:

Hi Kent,
Thanks for your email re: "SHOUT".
I first knew of this juke-box musical review several years ago when I was invited to a short season 'try-out' at the Jermyn Street Theatre, a tiny venue (70 seats) in the heart of London close to Piccadilly Circus. I thought it was a well-performed, enjoyable, fun, light-weight piece of entertainment especially as I had nine songs in the show! Not much of a story-line but there were some excellent impressions of 60's girl groups and singers, notably of Dusty Springfield, Lulu and Shirley Bassey. I also understood its birth was as an off-Broadway show. As I recall, there were nine of my songs in the show - all Petula Clark hits. The London producer told me then that he hoped to produce it on a larger scale in London and would keep me informed. I heard nothing more from him.
Then in January this year I received licensing notification from Sony / ATV Music relevant to a UK national tour of SHOUT - THE MUSICAL. My songs in the show are: COLOUR MY WORLD, DON'T GIVE UP, DOWNTOWN, I COULDN'T LIVE WITHOUT YOUR LOVE, I KNOW A PLACE, A SIGN OF THE TIMES, ROUND EVERY CORNER and WHO AM I. (One of mine seems to have been lost from the production I saw and I think it may be MY LOVE.)
The UK production is called SHOUT - THE MUSICAL not SHOUT - THE MOD MUSICAL. See www.shoutthemusical.co.uk. It stars Claire Sweeney and Sue Pollard and has been touring the UK since February. By July it will have played in 21 theatres across the UK. I'll be seeing it next week in Bristol and will let you know what I think of it. I understand that the show you saw in Chicago may be different to the UK version. Both versions seem to have received mixed reviews.
There don't seem to be any plans at the moment to bring SHOUT - THE MUSICAL into London which is a pity.
Best wishes,
TONY

Please DO send us our review ... as someone INTIMATELY involved with this music and this exciting era, I would LOVE to hear things from YOUR perspective. Here in Chicago, it received a rousing, standing ovation and there was plenty of laughter, toe-tapping and singing along throughout the performance. I'll agree there's not much to it story-wise ... and "lightweight" is pretty much a DEAD-ON assessment ... but the music is SO good and SO strong that it just carries the thing along. We LOVED it!!!

We've decided to feature a couple of songs from the performance to help whet your appetite ...

First up, the TRULY FORGOTTEN HIT DON'T GIVE UP by PETULA CLARK ... one of my FAVORITES by her (yet one you just NEVER seem to hear on the radio) ... a #27 Hit in CASH BOX MAGAZINE in 1968. (My ALL-TIME FAVORITE PETULA CLARK song is DON'T SLEEP IN THE SUBWAY, which is one of the comedic highlights of the show ... but that one you DO hear now and again ... so we've gone in favor of the lesser-heard track ... I mean, this is, after all, FORGOTTEN HITS!!!)

Then, the show stopper, YOU'RE MY WORLD, a #26 BILLBOARD HIT from 1964. (In the musical, this song is performed as part of a medley / counter-melody with the DUSTY SPRINGFIELD hit ALL I SEE IS YOU ... a VERY powerful rendition used to GREAT effect in what I felt was the musical's most emotional scene.)

If you get a chance to see SHOUT! in your area, PLEASE drop us a line and we'll run your COMMENTS and REVIEWS in our regular newsletter COMMENTS PAGE. Thanks! 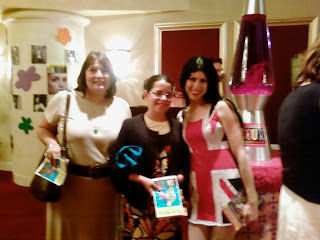 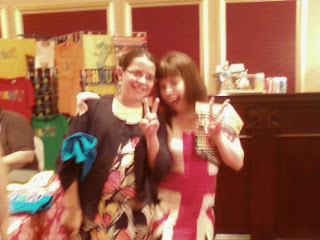 During the course of putting this little piece together, we had the pleasure of talking with VICTORIA LANG, one of the Co-Producers of the Chicago Production as well as one of the New York Media Coordinators. She tells us that SHOUT! first appeared on stage at THE DUPLEX in New York back in 2000 and was then transferred to London's JERMYN STREET THEATRE, which is where TONY HATCH evidently first got a chance to see it. It has since moved on throughout London, has been running successfully Off Broadway in New York, played to 72 performances here in Chicago and will open all over Japan in August. In addition to finding a home in Las Vegas, a multi-city US tour is ALSO expected to take shape later this year ... so hopefully some of our readers WILL have the opportunity to take in this fun evening of entertainment.

VICTORIA was also kind enough to send us this quick email:

Dear Kent:
Thank you for your kind words about SHOUT! I am so glad you enjoyed the show.
Thanks.
Victoria Lang
Co-President
PLUS Entertainment, Inc.
New York, NY

Thanks, VICTORIA ... we LOVED the show and are happy to help spread the word. (Maybe we can see it again in Las Vegas when we're out there for our anniversary in November!!!)

And then we also received a few words of thanks from LAUREN CREEL, the BLUE GIRL of the first performance that we saw:

Hey there Kent! My name is Lauren Creel and I'm the Blue Girl you saw in last Saturday's performance of "Shout!" I am the new Shout understudy and I was in the show the entire week last week! Victoria Lang, one of the producers, forwarded your blog to us and I am beyond pleased you enjoyed my performance so greatly ... especially since it was only my 5th show. Victoria also mentioned you would be coming to the final show on the 29th and although I don't forsee being in the show that day, I am going on for sure on Friday the 27th and hopefully Thursday the 26th as well.Thank you again for your kind words. I hope you enjoy the show as much the second time around! Lauren Creel

Thanks for taking the time to drop us a note, LAUREN ... I really do appreciate it. I hope a few others on our list will make the trip downtown to catch SHOUT! before hit leaves Chicagoland ... trust me, you'll be happy that you did!!!