DAVIE ALLAN ... "The King Of Fuzz" ... had his BIGGEST Hit back in 1967 when BLUES' THEME (from the motion picture THE WILD ANGELS, starring PETER FONDA) ... went to #33 on the CASH BOX Chart ... (It was a #3 SMASH here in Chicago) ... and it STILL sounds JUST as fresh today as it did back then!!!
Here it is ... 40 years later ... and DAVIE's got a brand new CD out called MOVING RIGHT ALONG. (Quite honestly, he's never really stopped!!! Check out his website and you'll see ALL of the other releases he's had in between!!!)
Click here: Davie Allan and The Arrows

In fact, it was only a few months back that we were telling you about his brand new Christmas CD, FUZZ FOR THE HOLIDAYS 2!!! DAVIE was kind enough to give us an autographed copy of that one just in time for the Christmas Holiday ... and he's just sent us a signed copy of his brand new MOVING RIGHT ALONG CD, too. (We'll be giving this away before you can even officially BUY a copy ... which, of course, you can do at the same email address shown above!!!)

Today we're also featuring another cut from this hot new LP called LISTEN TO THE GUITAR MAN. On this one DAVIE pays homage to some of HIS guitar heroes ... legendary artists like DUANE EDDY, DICK DALE, LINK WRAY and NOKIE EDWARDS of THE VENTURES ... in kind of a camp / vamp guitar extravaganza!!! (Some pretty cool vocals by LISA MYCHOLS on this one, too!)

FORGOTTEN HITS: You seem to have hit a real creative streak here lately ... several new recordings have become available these past few years. What do you think has been the spark to get you up and out there again? Do you think that the release of your ANTHOLOGY CD had anything to do with it? A chance to "reflect back" perhaps on all you had done in your career?
DAVIE ALLAN: I never really took a break, just didn't have the management. The CDs on "Sundazed" were cool but I had to sign off on the 60's (ouch!) to get that deal in motion. The first of those five releases was the "Devil's Rumble" anthology in 2004 but one of my best new albums, "Restless In L.A." was released a year before in 2003. 2004 also brought some great shows in New York, Atlanta, San Francisco and Spain plus the release of my first Christmas album, "Fuzz For The Holidays".

FH: What about live appearances? Are you getting out into the clubs again? Any touring plans in the near future that we can tell our readers about?
DA: I did a short promo tour in '07 for the release of my second Christmas album, "Fuzz For The Holidays 2" with Dick Dale Alumni as my backing band plus a short tour in Texas in February. Coming up are record release parties for "Moving Right Along", the first one is on June 13th at the "Juke Joint" in Anaheim, CA.

FH: How about the latest version of THE ARROWS? Have you guys been together for a while now? Are these the same guys who played on the new album?
DA: The November shows for "Fuzz For The Holidays 2" featured former Dick Dale drummer Dusty Watson (for a couple of shows) and Dick's current bassist, Sam Bolle and current drummer Bryan Head on the other shows. In February, it was Dusty and Sam for the Texas shows. I no longer have a definite "Arrows" band. I would love to have it be Dusty and Sam but that's not possible since they are so in demand. They are in other bands (most notably "Agent Orange" and "Slacktone") plus Sam will be back with Dick soon. They are not on the new album but I hope to record with them on my next project.

FH: Tell us about the new CD ... there's a nice mix of instrumentals AND vocals this time around ... is this the most you've ever sung on a DAVIE ALLAN album?
DA: I sang two of the five vocals plus we had recorded a couple for "Restless In L.A" and a couple more on "Fuzz For The Holidays 2". I actually did a solo country album in 1983 that had nine vocal tracks (the album was titled "An Arrow Escape").

EDITOR'S NOTE: This dude can sing, too!!! In fact, he's got a VERY nice voice. (We featured DAVIE's Christmas track A WINTER SONG last time around and got ALL kinds of positive response to that one!!!) There is a nice mix of vocals and instrumentals on the new CD ... DAVIE ALLAN "purists" won't be disappointed as the LP features those trademark DAVIE ALLAN guitar calisthenics throughout ... and the inter-mingled vocal tracks make for a nice change of pace.

FH: DAVIE ALLAN AND THE ARROWS have somehow ALWAYS been linked to The Top 20 Hit SHAPE OF THINGS TO COME by MAX FROST AND THE TROOPERS (which, of course, was the VERY first song we EVER featured in FORGOTTEN HITS back on Thanksgiving Weekend, 1999!!!). For YEARS it was rumored that YOU guys were the backing group on this track ... most likely because you WERE on the soundtrack to WILD IN THE STREETS and the single was released on your record label at the time, TOWER RECORDS.
DA: I was getting the question about "Max Frost" and the song "Shape Of Things To Come" a lot so I saved an answer that I keep reusing (since February '05): I wish I could say that we were "Max Frost & The Troopers" but unfortunately, it's just not true. I DID play on the "Wild In The Streets" soundtrack along with studio musicians known as the "Hollywood Wrecking Crew" (Hal Blaine, Carol Kaye and Larry Knechtel) but none of us played on "Shape Of Things To Come". A band was hired to do that one and it was kept a secret as to who the members were (actually "Mom's Boys" featuring Paul Wibier). The mix-up started when my instrumental version was released as the last "Arrows" single on the "Tower Records" label. All I did was play lead on that pre-recorded track so everyone assumed that we and "Max Frost" were one and the same. I'm on some of the "Max Frost" tracks which includes those that appeared on "The Glory Stompers" soundtrack.

EDITOR'S NOTE: We featured DAVIE's brand new version of SHAPE OF THINGS TO COME from the MOVING RIGHT ALONG CD in one of our recent newsletters. Here it is again for the benefit of anyone who may have missed it!

FH: Now this isn't the FIRST time you've recorded SHAPE OF THINGS TO COME either, is it??? Haven't you released at least a couple of other versions over the years?
DA: It's up to four versions now with the new one. I also did a vinyl single version in '98 and another version in 2000 for the "Live Run" CD.

FH: One of my favorite tracks off the new LP is LISTEN TO THE GUITAR MAN. It's kind of a call-back of sorts to the old DUANE EDDY track DANCE WITH THE GUITAR MAN ... and I like the way you worked in your own little guitar tributes to some of the OTHER great guitarists of that era. Who were some of your musical influences growing up??? Who were the "Guitar Gods" you aspired to?
DA: Putting that tune together was a labor of love and my plan (actually my dream) was to get Duane, Nokie, Dick and Link to do the parts I wrote for them. My first hero was Elvis. Seeing him holding that guitar on TV did it for me. Then it was Duane and then Nokie BUT ..... my musical hero is Henry Mancini!

EDITOR's NOTE: Now THAT would make for an AWESOME video ... listen to the track ... can't you just visualize all these guitar greats up there on stage together playing this one ... and then stepping up to the spotlight as she calls their names??? Somebody needs to get on this idea ... stat!!!

FH: You've mentioned before doing some studio work with THE WRECKING CREW. How did you first happen to be singled out as a session guitarist? Who are some of the other artists that you've worked with over the years?
DA: I always try to avoid mentioning a certain person from the 60's but I started playing on all of Mike Curb's sessions that included The Hondells, The Paris Sisters, Linda Ronstadt's first Stone Poney's session, Jerry Naylor, Terry Stafford, Annette and others plus the two dozen soundtracks.

FH: You seemed to "click" in the Soundtrack Arena ... there was a certain "DAVIE ALLAN Sound" that a lot of these teen exploitation flicks were looking for. In hindsight, do you feel that this "typecast" you in any way? Are there other musical avenues you would have liked to pursue ... say a bit more outside your genre ... but perhaps the powers that be at the time prevented you from exploring these areas for fear that the public might not have accepted you in that role?
DA: I was so thrilled with doing those films that being "typecast" was never an issue. I did attempt a vocal career in the 70's and did a few singles but I had no success whatsoever. I tried it again as I mentioned earlier by doing a "Country" album in '83. Another disappointment. The vocals on the new albums have been received quite favorably but I am definitely more at home doing instrumentals. Even though the new album has a few vocals, I only do instrumentals on the "live" shows.

FH: What's next on the horizon for DAVIE ALLAN? What kinds of things can your fans look forward to in the next year or two?
DA: As you know, the music business is not what it used to be but I have a another project in the planning stages and I'm hopeful that "Moving Right Along" (and the official release of "Fuzz For The Holidays 2" in the fall) will lead to a new album next year.

FH: Thanks for taking the time to answer a few questions for us today in FORGOTTEN HITS ... I really do appreciate it!

DA: Thank you so much, Kent, for this interview and for your continuing to help me get the word out there! 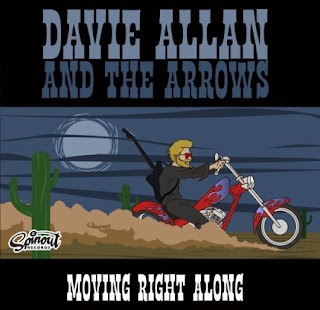 Put your hands together for MR. EDWARD POND of Lebanon, Oregon!!! (Yes ... THAT Edward Pond ... the guy who "went POND on me" a few years back!!! Believe it or not, he's remained a loyal FORGOTTEN HITS Reader ... and we're happy to send him a copy of this hot new CD release!) Congrats, ED!!!

Enjoy the new DAVIE ALLAN CD ... and report back to us with your own personal review! Congratulations again ... and for all you folks who registered to win, don't worry ... your name will roll over for our next FORGOTTEN HITS Giveaway!!! (If YOU haven't registered yet to pick up something from our FH Prize Closet, get your entry in NOW!!! Just drop me an email and we'll add you to the list for our next drawing!!!)