I dare any of the jocks on our list to play THIS set of music on their program today!

Let's face it, everyone is always looking for clever programming ideas ...

Well, here's one that's guaranteed to keep your listeners bouncing along all day long.

Spread 'em out throughout the day ...

Or feature a series of two-fers ...

Or, just shoot the whole wad and play them as one full seven song set.  (The eighth suggestion is purely optional.)

Either way, it's a programming idea that your listeners will be talking about all day long.

In this RIDICULOUSLY absurd time of "political correctness," I like to call it:  "A Nice Set of Knockers!!!"


Guess who the biggest selling artist of 2020 is so far …

Statistics released yesterday show that exactly ONE artist … and ONLY one artist … has sold over one million units during the first six months of this year.

And you may not believe who that artist is …

It’s THE BEATLES … who recorded their last album of new material OVER FIFTY YEARS AGO … and are STILL outselling ALL of the current hot acts of today!  (What does THAT say for the state of the music industry?!?!?)

Incredible as it may sound, sales of The Beatles’ music for the first six months of 2020 amount to just under 1.1 million units.  (Imagine what that sales total might look like had the long-awaited “Get Back” film come out on schedule!)

The music of OUR lives is still impacting the listeners’ choices today.  (This list reads like our Top 3333 Most Essential Classic Rock Tracks list!!!  Which, by the way, you can still request a copy of by sending me an email at kk@forgottenhits.com … as well as check out online here:  https://classicrockessentials.blogspot.com/

Hi Kent!
I want to belatedly thank you and Phil Nee for the Top 50 Essential Countdown on Memorial Day Weekend. Loved that you added all the extras … some great stuff classic rock radio ignores. I'm still listening to it … and loving it.
Pre-pandemic, I was at the Hard Rock Casino and “Brandy” by Looking Glass came on, between a Stones tune and Bon Jovi. You know what? It fit perfectly. Sadly, classic rock radio doesn't have the insight, and this great song is relegated to oldies.  I’m also voting for it as one of my favorite summer songs.
Likewise, “Vehicle” by The Ides of March …
I’m not sure if this qualifies as a summer song, but I know that the first I heard it was on the beach, and from the sound of the opening horns it blew me away! Still does.  Ditto for “Crystal Blue Persuasion” by Tommy James and the Shondells … a masterpiece.
Hope all is well. Stay safe.
Sher

I am happy to report that “Brandy” DID make The Top 100 Summer Favorites list this year.  (It earned an Honorable Mention when we last ran our poll in 2010.)
I had the pleasure of congratulating lead singer (and the writer of this great tune) Elliot Lurie last week on making the cut this time around.
I will hear this one on Classic Rock radio from time to time … here in Chicago both The Drive and The River play it fairly often.  (Isn’t it funny how radio stations don’t have call letters anymore???  I mean, they DO … but we all know them by their “nicknames” these days!)

Meanwhile, despite our efforts,, even the BEST Classic Rock Stations continue to miss the concept of “less is more” …

This week on The Drive’s Two-For-Tuesday feature, between 8 am and 5 pm (a nine hour span) they played EIGHT songs by Aerosmith (that’s an average of one per hour!) and six songs each by Def Leppard, Bad Company and The Rolling Stones.  (That’s OK … usually AC/DC, Led Zeppelin and Pink Floyd make this list, too, but we were subjected to only four titles by each during this workday stretch.

C’mon guys … spread the wealth … we just proved that there are literally THOUSANDS of other great songs you could be playing once in awhile … mix it up a bit … and surprise us.  (How predictable has it become?  The on air jocks now encourage their listeners to “guess the second song”!!!  Actually, me and a co-worker have already been doing that for months now … and guess right about 50% of the time!!!  Note:  This is NOT a compliment!!!  Once it becomes THAT easy to know what’s coming next, it’s time to look for entertainment elsewhere.)

And The Drive is, without question, the best game in town … and their ratings are thru the roof.  But is this REALLY what the listeners want?  Or might the ratings go up even higher with a little variety thrown into the mix?

Meanwhile, we’re putting together the presentation of Your All-Time Top 100 Favorite Songs Of Summer as we speak and will have more details soon (next week?) about when, where and how it will air.  (kk)

And, speaking of The Beatles (which we were before I went off on another one of my tangents), Rock Cellar Magazine is taking a poll now to determine The Top 50 Favorite Beatles Songs of All-Time.  You can vote for your Top Five Favorites here:  https://www.rockcellarmagazine.com/top-5-songs-from-the-beatles-poll/ …
And then listen to the results of The Top 50 over Labor Day Weekend.  (More details to come as to when and where this program will air.)  kk

Sorry to hear of Charlie Daniels' passing. He did some interesting stuff.
Although I don't know much about him or his music, I just wanted to comment on his tune "Uneasy Rider", which got a lot of airplay here in 1973, but on "rock" stations.  I'd never heard of him, but that tune was funny, and I seem to remember it hitting the pop charts here.
Mike Wolstein
It was a hit here in Chicago in a big way, reaching #8 on the WLS Chart and #10 over at WCFL.  Nationally, it peaked at #9 in Billboard.  You don’t hear this one much anymore … radio has decided that Charlie Daniels was just a One Hit Wonder … if you hear him at all (and you don’t nearly as much as you used to), it’s pretty much “The Devil Went Down To Georgia” or nothing at all.  In addition to these two tunes, Daniels also hit The Pop Top 40 with “The South’s Gonna Do It” (#26, 1975), “In America” (#10, 1980), “The Legend Of Wooley Swamp” (#23, 1980) and “Still In Saigon” (#22, 1982).

Hey Kent –
Harvey Kubernik did a nice job encapsulating Charlie Daniels. I always liked the sinister Devil part in "The Devil Went Down To Georgia," so when our writer Shawna interviewed him in 2007, I had her him ask if the Devil got the shaft. His reply: "The Devil's just blowing smoke. If you listen to that, there's just a bunch of noise. There's no melody to it, there's no nothing. It's just a bunch of noise. Just confusion and stuff. And, of course, Johnny's saying something. You can't beat the Devil without the Lord. I didn't have that in the song, but I should have."
Charlie was a huge football fan, so in the time they weren't talking about music, they discussed the Pittsburgh Steelers.
Here's the full interview:
https://www.songfacts.com/blog/interviews/charlie-daniels
Be Well,
Carl Wiser
Songfacts.com

Hi Kent,
As always, a great blog my friend.
Thanks for the head up on the ESPN Eagles concert ... I agree, Stu Smith should be an Eagles member … he is one more incredible guitar player ... perfection every time he plays ... and he makes it look so easy!!!
Have a great day, be safe, be well, Partner.
It's a good day to stink up the neighborhood with yard bird on the grill ... lol
Take care,
Barry
The amazing part is that Steuart seems to want absolutely NO part in being an Eagle.  (I think anybody other than Glenn Frey and Don Henley have been “hired hands” ever since they came back anyway … but the fact that he’s been with them for as long as he has … and even cowrites some of their new material … seems like he’s earned his rightful spot in the “official” line-up.  (kk)

FH Reader Frank Sennish sent us the chart for this week in 1966, for WKNR in Detroit … 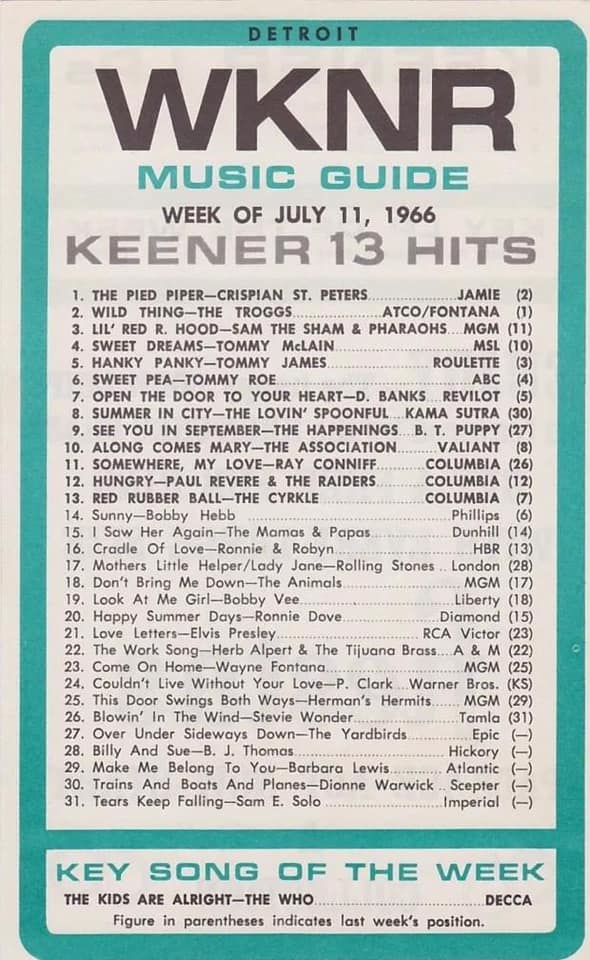 And Frank B. sent us this new Fiat commercial …
(I guess you could say this one features the meeting of TWO legends!)


Happy birthday to Petula Clark, one of the greatest of all time!
88 on July 15th … and still performing!
Mike 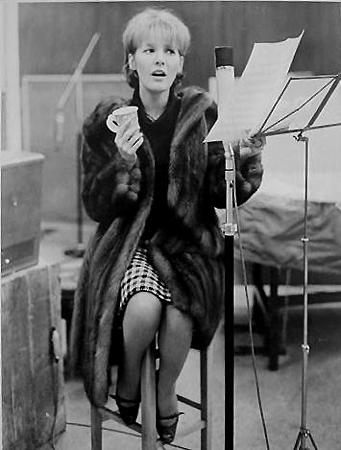 Yes, we saw here a couple of years ago at The Arcada Theatre … good show.
We had a couple of other birthdays this past week that Me-TV-FM was celebrating … Linda Ronstadt for starters on Wednesday (the 15th) and Dion DiMucci on Saturday (July 18th)
In fact, this weekend they’re celebrating the music of the artists who made Laurel Canyon their home during the mid-to-late ‘60’s, as highlighted on the recent EPIX 4-Hour Documentary.  Be sure to tune in and listen!  (kk)

>>>A change of pace today in Forgotten Hits ... Enjoy the music you just don't get to hear much anymore ... 'Cause it's all good stuff!  (kk)
Get out of my iPod!
Actually, Kent, I hear most of the tunes you shared today all the time.
I have most of them on my iPod.
Maybe it has something to do with also being born in 1953 … similar tastes.
Thanks,
Stacee

Mark Bego’s next book will be a profile of Freda Payne, who topped the pop charts with her hit “Band Of Gold” back in 1970.  (Bego is considered to be the PREMIER biographer of the Music Stars and has already published best selling biographies on Michael Jackson, Aretha Franklin, Billy Joel, Elton John and literally DOZENS of others.
The Payne book is a fully authorized, in-depth biography and will cover Freda’s career, which spanned decades of albums and singles releases, not to mention an acting career in both film and television.
This is the first of a brand new two book deal with Yorkshire Publishing … and they are shooting for a Spring of 2021 release date.
In speaking of Freda Payne, Bego tells us “I have known her for years, and her story is a fascinating one that has encompassed jazz, Broadway, R&B, rock & roll, and her iconic Number One hit 'Band of Gold.'  Freda has worked and associated with a virtual 'who's who' of show business, and she 'names names.'"
Stay tuned for more information and (hopefully) another Forgotten Hits book giveaway!!!  (kk) 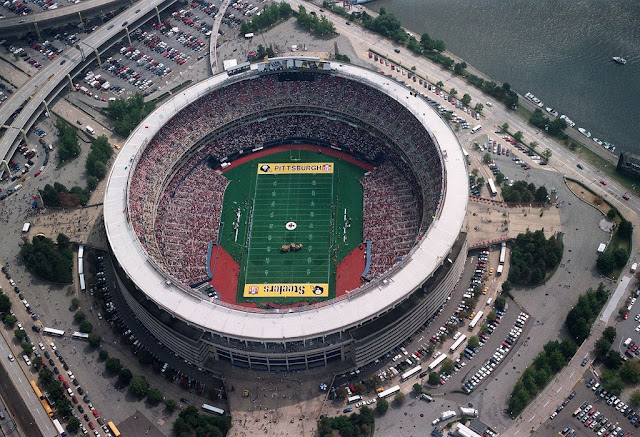