re: HOODAT?
Wow! Only one response to this?!?!?
Tom Cuddy sent us an awesome backstage picture of the '70's Spectacular Line-Up from back in the '90's ... and wondered how many of our readers could identify some of the artists in the photo. Here's all we've got so far: 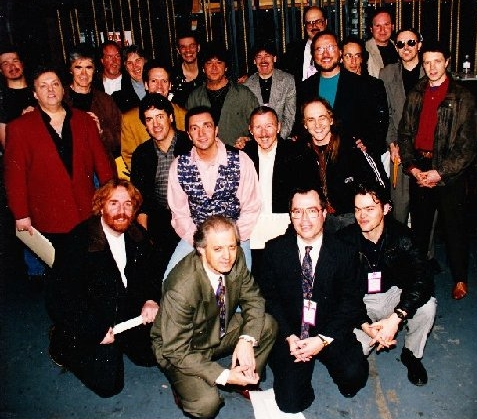 re: FIRST 45:
My first singles? Good question.
As far as I can remember ... believe it or not, it was "The Exodus Song (This Land Is Mine)" by Pat Boone.
Yeah ... I wasn't much of a swinger at 11 years old ... keep in mind this was with my OWN money from doing errands around the house.
My first 45 that my folks got me was at age 8 and that was "The Chipmunk Song"
Do you at least see a bit of progress from 8 to 11?
No?
Well, by 1963 I was purchasing many more records ... (my allowance had increased) ... even though my folks had a hiss fit every time (especially my mom ... dad could have cared less) mom heard a new song being played from my closed bedroom.
It came to the point when I was smuggling records up under my shirt and down my pants (don't ask).
I remember on her birthdays and Christmas gave me a really good reason to buy HER a record of HER choice ... so I ended up purchasing "Red Roses For A Blue Lady by Bert Kaempfert, "Dear Heart" by Henry Mancini ... yep, she loved plenty of elevator music ... however these songs WERE hits on the local / national charts.
The Beatles changed my entire way of thought about music ... I STILL loved The 4 Seasons, Beach Boys and had a GREAT appreciation for Phil Spector and his "family" of singers ... I must have played "Be My Baby" and "Baby, I Love You" a million times.
My collection blossomed to 14,000 and probably many more throughout the sixties, seventies ... and some eighties (I was a mobile disc jockey for awhile during the 80's) and was forced to purchase a LOT of music that I did not like ... it mostly was garbage.
So, that is that ... the beginnings.
Gary Peters
P.S. I forgot to mention "Love Kitten" and the GREAT B side "Why Can't A Boy and Girl Just Stay in Love" by Noreen Corcoran (who starred in the old tv sitcom "Bachelor Father"). This record is AMAZING ... produced by Nino Tempo and sax played like a crazy man, also by Nino. I thought for SURE this was another Phil Spector-produced recording, but when I bought it, it was on The 4 Seasons label "Vee Jay"
WOW!!
Of course many years down the pike I learned that Nino was one of many who played in the "Wall of Sound" grouping that Phil launched for his own company Philles.
IF you've never heard this record, seek it out ... it's one of the best ever recorded in my book ... IF you're a "Wall of Sound" fan.
Gary
Posted by Kent Kotal at 6:45 AM