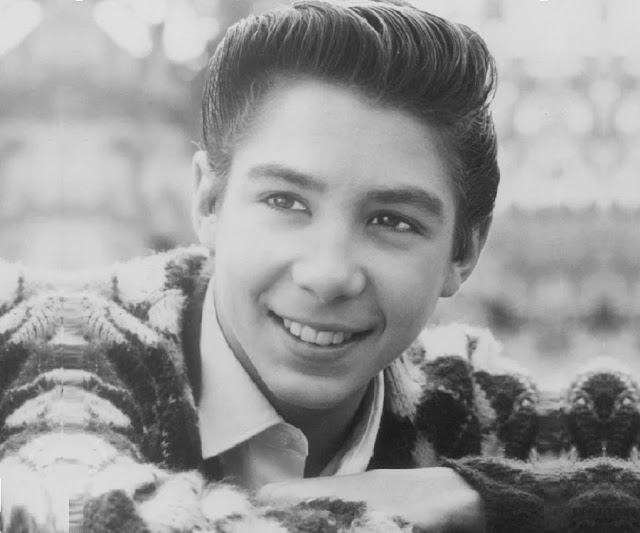 Or as Mark McCain, son of rancher Lucas McCain on “The Rifleman” …

Crawford passed away on Thursday, April 29th, at the age of 75.

His role on “The Mickey Mouse Club” lasted for all of one season (the series’ first), after which time the cast was trimmed by 50%.  Crawford used to joke that he was “a has been by the age of nine” ... but the truth is that Johnny would go on to fill many roles in both television and on the big screen

In 2019, it was revealed that he was suffering from Alzheimer’s Disease and fellow child star (and child star advocate) Paul Petesen of “The Donna Reed Show” started a Go Fund Me Page to try to help raise money to help offset some of Johnny’s medical bills.  Last year, he contracted Covid 19 (and then pneumonia), ultimately proving to be more than his body could bear.  For those of us who grew up with him (many of us at nearly the same age), he will be missed.

We’re going to our first live show in over a year this Saturday Night as the guests of Jim Peterik to see Jim and Carl Giammarese of The Buckinghams perform an acoustic, storytellers show at The Genesee Theatre.  Really looking forward to this (and it seems all social distancing protocol is in place) so watch for a full review on Monday!

Genesis has added US dates to their previously postponed European tour – and guess what – the tour kicks off right here in Chicago on November 15th!

Here’s their complete US Concert Schedule (as it currently stands) …

Phil Collins, Mike Rutherford and Tony Banks are all participating (and Phil’s son Nic will be on drums!)

I’ve never seen Genesis (or Phil Collins … or Mike and the Mechanics!) live before and quite honestly, I don’t know that they’ve ever really been very high on my “must see" list …

But there's just something about all of this that really appeals to me.  If this really is the full reunion, final tour it's being played up to be, I think I just might have to go and check this out!!!  (kk)

This from Ron Onesti:

While the theatre remains closed, we are currently in the process of rebooking all shows postponed due to our closure.  We are planning to reopen, with CDC guidelines in place, mid-July.

All previously purchased tickets will be transferred to the new date.  There is nothing you need to do at this point.  We will reach out to all ticket holders as new show dates are confirmed.  Thank you for your patience.

You can view a list of those rescheduled shows here …

Here’s how Bon Jovi is handling things in New Jersey …

Bon Jovi, the New Jersey rock band, is shooting a new concert at the Paramount Theatre in Asbury Park, New Jersey.  The movie will be shown May 22nd in Bay Shore, New York, and 300 other screens around the world.

Here's how it works:

No ticket sales on site. The sound will be broadcast through FM radio.  They suggest that concertgoers bring a battery-operated FM radio to listen to the concert and not to use their car battery.

I dunno … seems like an AWFUL lot of bother (AND MONEY!!!) to watch a movie in your car and listen to it on the radio.  Now if Bon Jovi was PERFORMING at The Drive In, that might make a little more sense … but $89 per carload to watch a film???  Nope, sorry … I don’t quite get that one!  (kk)

Watch for yet another Brian Wilson documentary coming out this June.  (Hey, it doesn’t matter … we’d watch TEN more of them!!!) 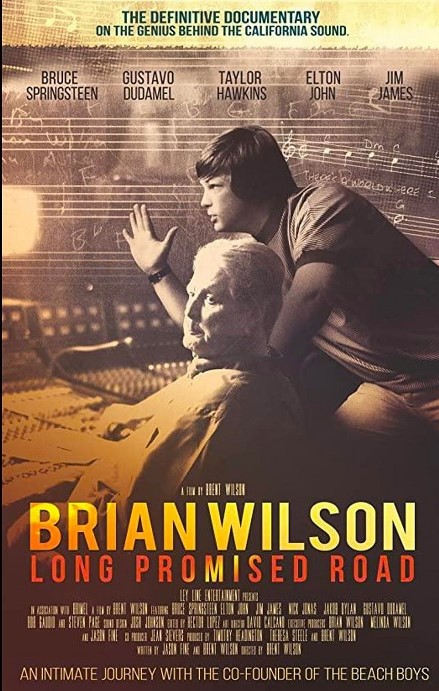 The book is great!  He's one of my biggest fans and promoters. I guess releasing that vocal album (Neon Lights - Linda Sarian) was a mistake but, it was a labor of love. Working on a new instro album but ... releasing it?

We’re also about to start reading the new Paul Evans book, “Happy Go Lucky Me,” available here in The States later this year.

You can read all about it (and maybe even preorder a copy!) here: 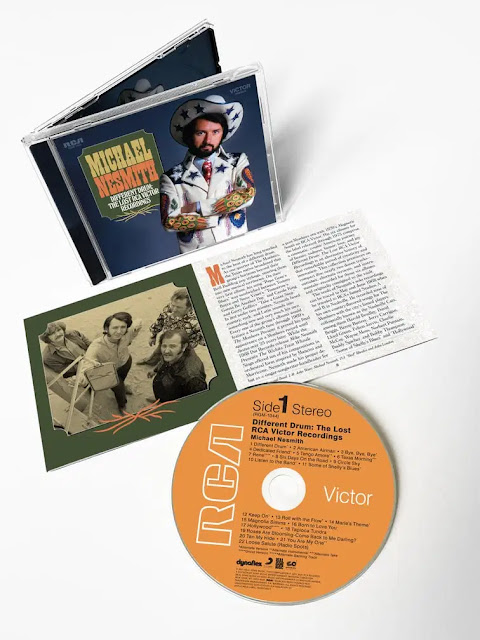 Wilson Pickett’s previously obscure recording of “Hello Sunshine” is certainly enjoying new life and a new audience of late.  We told you a few weeks ago that it was being used in a Walmart commercial … and then it was also prominently featured as the central theme in an episode of the NBC Drama “New Amsterdam” about a week ago.  (If you aren’t already watching this show, you’re missing one of the best written and best acted shows on television … stellar since day one.)

Never released as a single, somebody knew their stuff when they picked this one for the Walmart campaign.  (kk)

I don't know if you watch Fox News or not, but there are some two or three shows on that when they go into a commercial or come out of a commercial break, they play a snippet  of a song for some 10-15 seconds.

Now I don't know how or who decides on what snippets to play. Some of the songs go way back, and I do mean way back. I just heard Sam Cooke's 1964 version of TENNESSEE WALTZ. Again, how and or who decided on this one.

Some people out there working for ad agencies these days that really know and love our music … and I’m guessing these are all second or maybe even third generation fans who grew up hearing it at home and it made a lasting impression.   (That’s what good music’ll do for ya!!!)  kk

And, speaking of Sam Cooke, Harvey Kubernik’s EXCELLENT piece on Sam Cooke appears in Classic Bands today as the revamped “Sam Cooke: Legend” DVD is re-released.  (We ran an abbreviated version in Forgotten Hits five weeks ago … so this is a welcome read!)

>>>I think Linda was just in a very strange mood the other day when we saw this sign and she said, "That reminds me, I just want you to know I'd go the extra mile to save money on your burial." 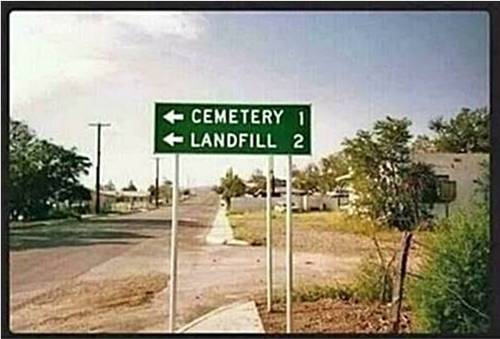 But really, we were talking about how they can take one's ashes these days and using force, make them into diamonds to be set in jewelry pieces.  She asked me how I felt about that.

There are a couple of companies that I read about a few years back that (for reals) will take your ashes and actually mix them in with their materials to put on a fireworks display ... man, what a send-off THAT would be!  (kk)

Yeah, I saw that. No thanx … I can hear my comedic Sons now saying,

“Did you know our Dad had Blue Eyes?”

“Yeah, one just blew that way and the other blew that other way!”

Or, you could choose any of the following, all legitimate means …

You could “Become a Coral Reef!” If I did that, I'd get a herd of Singing Seahorses.  I could keep them in my Coral Choral Corral.  But they’d have to perform “Live Rock!”

You could also consider “Ashes to Portraits” where your ashes are placed over special portrait paint where they then can actually be seen. Once I heard about that, I immediately stopped dusting my paintings. It could be someone I used to know!

Or, your remains could be interned in a Colorful Party-size Balloon and be gently released into the Stratosphere.  But you know what happens when a Balloon goes too high?! Yep! Bang!  (“Did you know my Dad had Blue eyes . . . ?” )

And there’s a procedure where your body’s discomposure is accelerated and turned into compost! In fact, earlier this week, the Colorado House passed a Bill that would legalize natural organic reduction of human remains into soil. (True!)

I asked my Sons if I chose this method, would they like part of me for their gardening or something. They both said, “No, thanx, Dad, but we appreciate the sediment!”

And with that, I’m going to bail outta here to the music of Queen’s “Another One Bites the Dust” followed by Kansas, “Dust in the Wind!”

Many, many years ago when my daughter was around five or six years old, she won a goldfish at a carnival.  Of course, we didn’t have anything to keep it in, so it slept in its bag of water that night until I could go out and pick up some fish food and a small fish bowl to keep it in.

(This was back in the day when you could just walk into Woolworth's and find an entire pet department inside the store!!!)

So I bought six more fish, brought them home and set up my daughter’s very first  Kid Aquarium.  She named them all and had never been happier.

About three days later, we found one of the fish (TuTone) floating sideways on top of the water.  Naturally, she was heartbroken … but we staged a ceremonial Burial At Sea (via the toilet bowl) and said goodbye.

We had just gotten past the sniffling and the very next day Fish #2 (Golden Tail) was found in the same position, doing the sidestroke in our little bowl.

Again, we went thru the ritual (less sobbing this time) and hoped for the best.

But then the very next day, Fish #3 was toast … only by this time, my daughter had come to expect the inevitable, scooped him up in the net herself and flushed him down the toilet, boldly announcing, “Another One Bites The Dust.”  I’ve gotta admit, it TOTALLY cracked me up.  (That same daughter … now about to turn 36 with two kids of her own … has also never forgiven me for taking her to see “Jaws” at “too early an age.”  Lol)  And them ain't no fish tales!!!  (That same daughter gave away little bowls of beta fish at her wedding many years later!)

So yes, I can relate to the many parallels in your comments.  (kk)

Flash Forward 20 years and youngest daughter Paige won a goldfish at yet another carnival.  Because she was going out with friends afterwards, she gave it to Frannie to take home, who then decided to care for it (who was now named "Millie," because Paige was currently starring in a production of "Thoroughly Modern Millie" at the time) and (short of carrying Millie along with us when we walked the dog!) made her feel like an equally loved household pet.  I never knew a goldfish could grow to be that big!  And the beautiful colors that came out, too ... amazing!  Millie lived for about twelve years ... a carnival goldfish!!!  Who would have ever thought!  (She received a proper land burial once her time had come so that she could always still be here near us.)  kk

OK, so now that I'm a bit tearing eyed after waxing nostalgic about some very special family memories, I've got to lighten the mood a little ... so, here's another Chuckles Buellism that TOTALLY cracked me up!!! 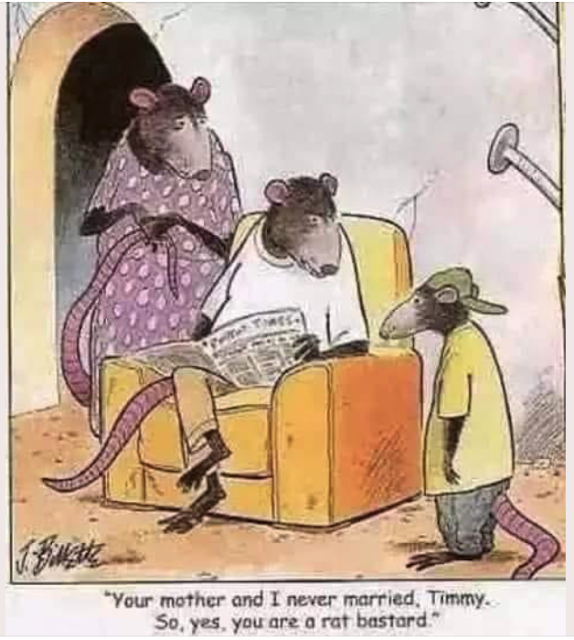