We'll do a little bit of unashamed cross-promoting today here in Forgotten Hits.

That series sprang from a number of questions we received after featuring Jambalaya, the classic Hank Williams country song, as done by John Fogerty, leader of CCR, under the guise of The Blue Ridge Rangers.

Fogerty was a one-man band on this album, first released back in 1972 (and virtually ignored ever since.)

Today, we'll not only feature this great version (a Top Ten Hit in its OWN right on The Cash Box Chart ... and Top Five here in Chicago on Super 'CFL!) ... but ALSO an excerpt from our CCR Series regarding the recording of this tune and The Blue Ridge Rangers album. (For more details on this revolutionary band, be sure to check out the COMPLETE Creedence Clearwater Revival Series at the link above.)

One of the first MEGA-successful Hard Rock Bands of the Rock Era was Flint, Michigan's Grand Funk Railroad. In 1969, 1970 and 1971 they were selling HUGE quantities of albums and receiving ALL kinds of airplay on the relatively new FM Radio Band ... yet today it is EXTREMELY rare to hear ANYTHING by them that pre-dates their 1973 #1 Hit We're An American Band. The entire early phase of their career has been virtually ERASED from the radio airwaves.

Now, in all fairness, until Todd Rundgren took over the production reigns for GFR's "We're An American Band" album, they were not what you'd consider Top 40 staples ... in fact, just three singles managed to crack The National Top 40 prior to their chart-topping hit. Closer To Home (#22, 1970) is something that you MIGHT hear on a really good Classic Rock FM Station ... but is rarely (if ever) heard on the oldies stations, where it TRULY deserves some recognition ... it's an excellent tune that your audience will respond to. An occasional spin of Footstompin' Music (#29, 1972) and Rock 'n' Roll Soul (#24, 1972) just might earn you a positive reaction, too. (Personally, I've always enjoyed their version of Dave Mason's Feelin' Alright, too ... as well as some of their earlier FM Hits like Heartbreaker, Inside Looking Out and Mean Mistreater.)

Prior to forming Grand Funk Railroad (named after Michigan's Grand Trunk Railroad), Guitarist and frontman Mark Farner and Drummer Don Brewer had both been members of Terry Knight and the Pack, who charted back in 1967 with their version of I, Who Have Nothing. (In fact, Terry Knight went on to manage and produce Grand Funk Railroad in the early years! We featured the Terry Knight and the Pack hit during one of our Local Hits / Show Me Your Hits series a few years back.) Bassist Mel Schacher was a former member of ? and the Mysterians,, who topped the charts with the classic 96 Tears back in 1966.

Their first eleven albums all went multi-gold and / or platinum and eight of those landed in The Top Ten on Billboard's Album Charts. Nearly every early '70's aspiring garage band member had copies of classic GFR albums like On Time, Grand Funk, Closer To Home, Survival, E Pluribus Funk, Mark, Don and Mel, Phoenix, We're An American Band, Shinin' On, All The Girls In The World Beware!!! and their Live Album in their personal record collections. (Of course those SAME hard-rockin' guitarists would have called you "insane" had you told them that their favorite rock band would eventually be topping the charts with a remake of a Little Eva tune!!!)

Today we're featuring three of these earlier, long-forgotten tracks, in the hopes that a deejay or two on the list will be inspired to give them a spin, if only to gauge their listeners' reaction.

Probably MOST radio-friendly (and recognizable) would be Footstompin' Music ... this one'll get your head bobbin'!!! We've also got Rock And Roll Soul for you today ... as well as Grand Funk Railroad's version of Feelin' Alright. (If nothing else, ALL of these ought to jar a memory or two!!!)

Aww, what the heck!!! The VERY best of their Forgotten Hits has GOT to be Closer To Home ... so we'll give you THAT one, too!!!

We're On Our Way

In the gallows of Beatles / Apple Records folklore, we often hear the stories about how artists like Badfinger, Mary Hopkin, Jackie Lomax and James Taylor came to be signed to the label. Other well known artists like Billy Preston, Ravi Shankar, Ronnie Spector, Doris Troy and Yoko Ono came to Apple by way of previous (or growing) relationships with The Beatles themselves. For the most part, John Lennon, George Harrison and Paul McCartney all had a hand in helping to develop these artists ... and often performed on their records as well. Even lesser-known acts like The Elastic Oz Band, The Black Dyke Mills Band, Trash, David Peel and Elephant's Memory reaped the benefit of having a Beatle write and / or produce some of their tracks.

But in 1972, a young rocker named Chris Hodge came on board by way of Beatles Drummer Ringo Starr. (It's said that Ringo caught Chris performing in a London club and liked what he saw ... they also reportedly shared a common love of science fiction movies.)

Chris' only U.S. Hit, We're On Our Way, snuck into The American Top 40 when it peaked at #36 on The Cash Box Chart during The Summer of '72. (Once again, this one fared a little better here in Chicago, peaking at #17 on The WLS Chart.) It probably hasn't been heard on the radio since ... which is too bad because it's actually not a bad track.

Although he went on to record for a couple of other record labels, Hodge never hit The U.S. (or The British) Charts again.

Give a listen to We're On Our Way ... and see if this one rings a bell at all.

DIDJAKNOW?: Chris' hit We're On Our Way was produced by Tony Cox ... Yoko Ono's ex-husband!!! How weird that Ringo and Yoko may have been the ones most responsible for its release!!! 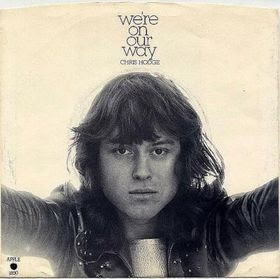 I saw THIS question raised on another list I belong to a couple of weeks ago ...

Do any of you remember Sir Monti Rock III?

But before I could even pull something together to put up on the web, I saw that answers were already coming in:

Of course I remember! -- Disco Tex and The Sex-O-Lettes. I think the "hit" was "Get Dancing." I remember playing it on the radio, although I don't remember what year it was, so I don't know if it was 'KB or not. But I do remember the song was fun, and Monte made Elton John and Liberace look conservative.
Don Berns

The single was a hit in late 74, early 75 ... I probably played it during my short stint on WYSL, then.
Take care,
Bob

Sir Monti Rock III is alive and well and living in Las Vegas. Remember his line(s) in Saturday Night Fever? "This is Monti, your delicious DJ -- turn yourselves in, baby!"
John Bisci
www.lancasterheroes.com
Sir Monti Rock III (Real Name: Joseph Montanez) had two Top 40 Hits as Disco Tex and the Sex-O-Lettes in 1975: Get Dancin' (which actually made The National Top Ten) and I Wanna Dance Wit' Choo, which hit #23. Both are camp, over-the-top, horribly hard to listen to, God-Awful semi-disco tracks that definitely fall into the Forgotten Hits category ... by all appearances, conventional oldies radio won't touch them!!! (Quite honestly, I'm not so sure that these tracks need to be resurrected!!! lol In fact, along with Rick Dees' Disco Duck, Disco Tex's recordings are a pretty fair representation of disco music at its absolute worst!!! At the very least, nothing short of "Disco Gone Wrong"!!!) But the truth is these recordings were EXACTLY what they were intended to be ... they were SUPPOSED to be completely outrageous and out of control ... and that's what made them so unique at the time!

Prior to his chart success, Sir Monti Rock III was probably best known as a hair-dresser ... in fact, at one point, he owned a chain of hairdressing salons ... and he became an internationally known celebrity for his flamboyant behavior. (He even managed a few movie roles during his fifteen minutes of fame!) Believe it or not, his hit singles were produced by the legendary Bob Crewe ... you've just gotta wonder what he was thinking at the time!!! (Novelty hits??? Or just part of the crowd he was hangin' out with back then?!?!?)

You can check out all the latest on Monti's comings and goings at his website here:
Click here: Monti Frame


(In fact, how cool is this?!?!? If you're interested, you can even hire Sir Monti Rock III to perform your wedding ceremony!!! Yep, I think folks'll remember that event!!!)
-- Kent Kotal
Posted by Kent Kotal at 6:25 AM