It's a Fractious Friday, as my man, the Real Don Steele would holler every Friday on KHJ! And fractious it is - Just wanna tell everyone that Joel Whitburn and the gang at Record Research have REALLY outdone themselves with the forthcoming (copies printing late October) new Top Pop Singles book - the 17th (!!!) edition just looks to be spectacular, judging by the flyer I received in the daily mail yesterday.  The flyer itself is amazing, my highest praise to the team and or person who designed it! Always a pleasure to receive news and flyers from Record Research.   I will be ordering my color print (worth the price, IMO) copy very soon. The color pic sleeves really pop off the sample page. Highlight book purchase of the year!

I still have my first Whitburn book purchase, Top Pop Hits 1955-1978.  It's falling apart, the hardcover is nearly shot, but hey, I was 15 when I saved my allowance money and my lawn cutting 'round the neighborhood proceeds to buy it.  I faked being too sick to go to school the next day after it came in the mail, just so I could stay home all day and read the "bible" and duly annotate my 45rpm collection - it truly WAS a religious experience for a teenaged pop music chart geek!

I have owned every updated copy since the 1972 edition.  (I found the 1969 book at The Rosary College Library, which had a 1970 addendum.  They wouldn’t sell me a copy so I would stop by every day at lunch and write the info into a notebook.  This was in the day days before scanning or phone cameras or internet or any of this stuff we take for granted today!)

We have been singing the praises of Joel’s new book, too.  (In fact, I ordered both a black and white AND a color copy for my own collection!)

I believe this will become the definitive book covering the era of music we feature most here in Forgotten Hits (coupled with Joel’s Comparison Book, too, showing the peaks of every chart hit, 1954 – 1982, in all three major trade publications, side by side … a book I have used religiously EVERY SINGLE DAY since it was first released … also available on the Record Research website.)

The new book can’t come fast enough as far as I’m concerned.  (And when the 1990 – 2022 edition comes out next year, I’m sure I’ll still order it, just to have some point of reference of those chart years as well.)  kk

And, since we’re talking about the music that most appeals to our Forgotten Hits Readers, I’m sure you’re ALL super excited about the just-announced Super Bowl Half-Time Show coming up on February 13th …

Acts we all know and love …

Yesterday, we told you about the new John Mellencamp / Bruce Springsteen collaboration … and today we’ve got a new Elton John / Stevie Wonder due to share, recorded during Elton’s lockdown sessions.  (Of course the two also shared vocals on Dionne Warwick’s 1986 #1 Hit “That’s What Friends Are For,” which also included Gladys Knight.)

Titled “Finish Line,” it’s got a bit of a gospel feel to it.  (Man, Stevie sounds just like old Stevie on this one, doesn’t he?  And, of course, he’s got to slip in his trademark harmonica bit again, too!)  kk

You can check it out here:

And speaking of new releases … 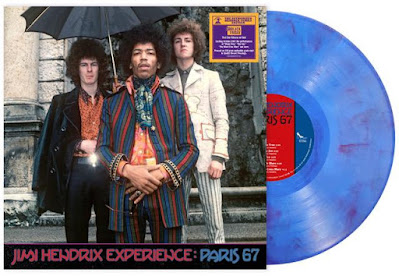 This live recording documents Hendrix’s triumphant return to Paris almost one year to the date of their 1966 showcase as a burgeoning support act for Johnny Hallyday. Now in place of Hallyday’s audience were more than 14,000 screaming Jimi Hendrix Experience admirers. In his own inimitable fashion, Hendrix graciously acknowledged his audience for their early support. “Thank you very much for last year, for letting us play here,” prefaced Hendrix before starting “The Wind Cries Mary.” “Instead of booing us off the stage you gave us a chance, so thank you very much.”

These recordings capture the verve and exuberant spirit displayed by the group.  Jimi kicks off the performance with a rousing “Stone Free,” known to his fans as the flip side of his debut single “Hey Joe”.  “The Wind Cries Mary” finds Jimi in fine voice, showcasing his deft touch with slow ballads. The raucous “Catfish Blues,” Jimi’s unique hybrid of Muddy Waters’ classic “Still A Fool,” was another early-stage favorite of the Experience.

For the first time, tracks from this Paris concert that were previously only available on The Jimi Hendrix Experience box set from 2000 (aka the purple box) are re-integrated with several other tracks recorded that night, making Jimi Hendrix Experience: Paris 67 the most complete official release of the October 9, 1967 set to date.

Dagger Records was founded by Experience Hendrix, L.L.C. in 1998 as an ‘official bootleg’ label, providing fans throughout the world with additional live performances, home demos and studio recordings not issued on commercial albums. With over a dozen vinyl and CD titles to date, the imprint is an invaluable resource for devotees who want to dig deeper than the standard Jimi Hendrix catalog. Apart from special, limited edition vinyls such as this release, Dagger titles are not available in retail stores or via digital services such as Amazon Music, Spotify and Tidal but only via jimihendrix.com.

Titles in the Dagger series are intended to provide Hendrix’s fans with new appreciation and insights for his songwriting explorations, found on each of Dagger’s Morning Symphony Ideas (a collection of 1969 and 1970 demo recordings), Hear My Music, and Burning Desire.  The live albums in the series include historically significant events such as his final concert at the Isle Of Fehmarn on September 6, 1970 and March 1968 Capitol Theater performance captured on Live In Ottawa that Jimi himself recorded.  Dagger also offers a peek into Jimi’s pre-Experience days as a member of Harlem-based R&B musician Curtis Knight’s band with Live At George’s Club 20 1965-1966 and No Business: Curtis Knight & The Squires: The PPX Sessions, Volume 2.

We’re hearing LOTS of Rolling Stones music these days (seems to be everywhere you turn!) … between the band now being here in The States, the new expanded reissue release of their “Tattoo You” album, the passing of Drummer Charlie Watts … and now Mick Jagger turning up at a bar in North Carolina … and then on The Howard Stern Show … much like Chickenman, They’re Everywhere, They’re Everywhere!!!

Some of these expanded Stones releases are long overdue.  (Far less revolutionary bands have been enjoying their new day in the sun for YEARS now … and I’ve got to tell you that I’ve really enjoyed hearing the expanded editions of “Goats Head Soup” and “Sticky Fingers” … and am really looking forward to “Tattoo You,” coming out next month … and this coming from a guy who didn’t typically BUY Rolling Stones albums at the time they were released.

It’s interesting to trace the evolution of some of these songs (and listen to different ways they once considered interpreting them) … and, quite honestly, I have enjoyed some of the tracks left on the cutting room floor more than the ones selected for commercial release at the time.

The Stones have always gone back to their archives when new material was needed for an album … and they have dusted off some unfinished gems that really shined once they pumped some new juice into them.  (Even “Start Me Up” was a reject the first time around … before it became a #2 smash.  It’s still one of my all-time favorites by them … and is also my current ringtone!  Lol)  kk

Who knew Dave Grohl had such great taste in music?!?!

The former grunge Nirvana drummer (and now front man for The Foo Fighters) revealed earlier this year his love of The Bee Gees’ music, even releasing his version of a few of their tracks as “The DG’s” on a special Record Store Day release …

Now, in an interview on BBC Breakfast, he’s raving about the new music just released by ABBA, even offering to drum for the group should they decide to perform live again!  (You know what I mean … in a non-avatar sort of way!)

Grohl just continues to impress and amaze me … and he’s not ashamed to admit that he likes the same music that I do!!! (lol)  Hey, I’ve never been a closet Bee Gees or ABBA fan … good music is good music … and you won’t find more endearing melodies than from these two groups!

“Oh my God, I’m such a big ABBA fan.  When I saw that they were coming back and they had a record, I shot that link to 100 people I knew, then listened to the new song and wept like a baby. I cried like a baby. Oh man!  It almost sounded like time hadn’t passed. Plus it was such a beautiful, romantic, melancholy, bitter-sweet retrospective. Ugh, it’s amazing. ABBA can do no wrong.”

When asked during the interview if he’d be willing to play drums for the band, he replied: “Listen, I will get up and play drums at the opening of an envelope. Show me a drum set and I will sit down to it. So yes, I would play with Abba.”

Noise 11 is reporting that when Foo Fighters appeared on “Jimmy Kimmel Live!” three years ago, Grohl was wearing an “old school band shirt” with ABBA’s name on it, and explained to Kimmel that he was excited about the long-awaited return of the group.

Grohl told Kimmel, “I heard ABBA was doing more music, there’s an ABBA comeback, and I flipped out.”

When Jimmy asked if he is a fan, Dave replied: “Who doesn’t love ABBA?! Everybody loves ABBA!”

Thanks for the lengthy info on the passing of singer Sue Thompson. I always did like her JAMES (HOLD THE LADDER STEADY). I wouldn't have known of her passing if you hadn't had the info in FH. Here is OKC, none of that info is never mentioned either by radio, television or newspaper. That's why I am always sure glad that FH keeps us updated on items like this.

In regards to the passing of singer Barry Ryan, I had to play the record again to remember what it sounded like. It did make our local top 40 radio station's survey ... and I do have a copy of the record (MGM), though the only one by him I have.

I think we were one of the first to break the story of Sue Thompson’s passing … and actually she died earlier than what was first reported … back on the 23rd of September.  As mentioned, my all-time favorite of hers was “Paper Tiger,” a #18 hit in 1965.  (kk)

A few new Ed Sullivan performances of interest are being added to the YouTube Ed Sullivan Channel … especially if you’re an Everly Brothers fan.

Remember, these are the full-length performances as they originally aired, and not the edited clips that have been circulating for decades.  Most, if not all, have not been seen in their entirety since the original air dates shown below.

Other recent adds of interest include …