We've raided the Chicagoland Radio and Media Vault BIG TIME this week as it pertains to "Soul Train" Host and Founder Don Cornelius.  Chicagoland Media has planned some major tributes to Cornelius this weekend and we wanted to pass the info along to our readers so that they, too, could tune in where applicable.  Read on ...

First comes this news about WCIU's Tribute to the late Don Cornelius.  (WCIU was the first station to air Cornelius' legendary "Soul Train" program back in 1971, a couple of years before the show was syndicated around the country)  Hopefully, we're not posting this too late for some of you to actually see it, 'cause it sounds like a pretty stellar line-up of programming ... including Don's first and last nationally syndicated episodes!  (kk):

WVAZ-FM / V103 and Herb Kent will have a special presentation on the air this Sunday, calling it "Don Cornelius Day." During Herb Kent's regular Sunday shift of Noon - 7:00 pm, instead of just playing old favorite music, the show will be focused on an old favorite legendary talent: the late Don Cornelius. For seven hours, the station will be celebrating the life and legacy of legendary, trailblazing broadcaster.
While Sunday afternoon's show will be a celebration, the reason behind this celebration is a sad one. Yesterday morning, the country was shaken by the shocking news of the death of Don Cornelius, the former Chicago radio / TV personality and creator / producer / host of the iconic "Soul Train" television show. Cornelius, a native of Chicago's Bronzeville neighborhood, and who started his incredible media career and "Soul Train" show here locally, was only 75 at the time of his death.
Throughout Herb Kent's seven hour show, very special guests will join him in talking about the greatness of Chicago's Don Cornelius. Among those scheduled to participate are former WBEE-AM / WCIU-TV / WGN-TV legend Merri Dee, former WVON-AM great Bill "Butterball" Crane, WBEZ-FM's Richard Steele, singer / Cook County Commissioner Jerry "The Iceman" Butler, and singer Gene "The Duke Of Earl" Chandler. Of course, Herb Kent, a radio legend himself, former co-worker of Cornelius' at WVON-AM, and life long friend of his, will be sharing his many memories throughout the day. Additionally, fans will be welcomed to call into the WVAZ-FM studios on Sunday afternoon to share their reflections of Don Cornelius.
Derrick Brown, Clear Channel Chicago's Director of Urban Programming, said in a statement late today: "Don Cornelius was a true visionary. He took "Soul Train," a local concept and made it a worldwide phenomenon. He deserves our gratitude and respect."
Herb Kent pointed out: "Without Don Cornelius and the "Soul Train" show, music wouldn't be what it is today. He gave R&B music a giant boost."
The Sunday afternoon radio salute will be able to be heard over the air on 102.7 FM in Chicago, as well as worldwide via the V103 website and Clear Channel's iHeartRadio app.

Here's Chicagoland Radio and Media's original coverage of the death of Don Cornelius ...

Thanx for your clever turn of phrase in your announcement of Don Cornelius demise ... it was so precisely stated as to draw tears ... "... bought his own ticket on the Soul Train to the great beyond ..." Yeah ... exactly.  Sad.  RIP, Don!
Pttibg
Posted by Kent Kotal at 1:37 PM

It's been a few years since we saluted the date forever immortalized as "The Day The Music Died" ... and, quite honestly, I wasn't sure I'd do much to spotlight it today either.  In a way, it almost seemed to be overkill ... I'm sure radio stations across the country will be playing the music of Buddy Holly, Richie Valens and The Big Bopper all day long today ... along with (unfortunately!) repeated plays of "American Pie", too ... so I figured most of you would have already had your fill without me adding to the deluge!

But a few of our readers sent in memorial pieces or articles ... and I didn't want to slight anybody ... so I've run a few of these new pieces along with a link to our 50th Anniversary Forgotten Hits coverage from a few years back, too.

Click here: Forgotten Hits - Remembering "The Day The Music Died" ... 50 Years Later
With the anniversary date of February 3 coming up, and you probably have done this in the past, why not see how many tribute records your readers can come up with concerning the three artists who passed away.
Larry
We've run special features on the 3rd of February a couple of times in the past ... scroll back to February 3rd and 4th of 2009 to see our 50th Anniversary salute (or simply click the link above for the recap.)  Back when Forgotten Hits was still an emailed newsletter, we typically saluted February 3rd every year, sharing comments and memories from our readers.  (Of course if you ever really do decide to scroll through all of the archives we've got posted on this site, it'll take you damn near a lifetime to read it all!!! lol)  But I would be interested in seeing your list of tributes!  (kk)
Interestingly enough, we got THIS audio tribute from another FH reader ... spotlighting a couple of the tributes you're most likely speaking of!


Hi Kent,
I've been enjoying Forgotten Hits for a few years now; thanks for your good work.
I think I might have already sent this, but since we're approaching the anniversary, and since mentions have been made to "American Pie," I thought you might like to share this little piece of work that I did - well, 40 years ago (and then digitally remixed it a few years back).
http://www.msaoldies.com/files/BH-The_Day_The_Music_Died-1200.mp3
Keep up the good work!
Robert in Tulsa
Nicely done.  (I think I have heard this before ... but it's nice to be able to feature it again for those on the list who may not be familiar with it.)  Thanks again for sending!  (kk) 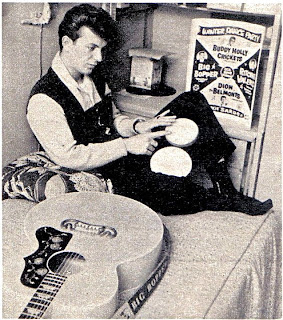 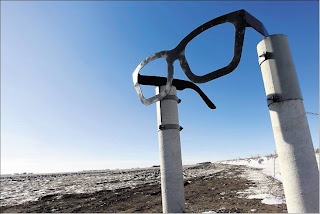 By Christopher Gannon for USA TODAY
Rock visionary: A giant pair of horn-rimmed glasses stands as a salute
to Buddy Holly and marks the entrance to the plane crash site. 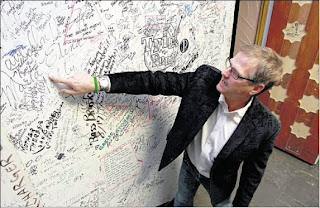 By Christopher Gannon for USA TODAY
They made their mark:  Jeff Nicholas points out the signature of Maria Elena Holly,
Buddy Holly's widow, among the autographs in the Surf's green room 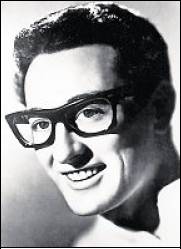 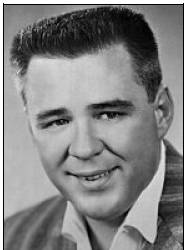 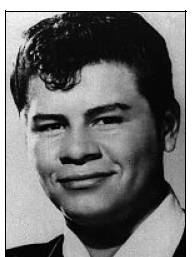 For a great look back at The Lovin' Spoonful, be sure to check out Jeremy Roberts' latest post:
Click here: Still Lovin' You: Charting The Lovin' Spoonful's hit singles and essential songs - National Pop Culture | Examiner
Kent ...
The story behind this song, 25 years ago.
Click here: Rock Flashback: Billy Vera and the Beaters’ “At This Moment”
Frank B.
Ironically, one of the songs that got "bumped" from our Sound Advice column a couple of weeks ago when we missed three days of postings!  The history behind this one is quite well known ... but it's great to hear it again.  (I had it doubled-up with Billy's 1968 Hit "With Pen In Hand" as part of our on-going "One You Know ... One You Didn't Even Know You Forgot" series.  (kk)
And congratulations are in order for Charlie Gracie, who's back on the charts again with his new single release "Baby Doll"!
CHARLIE GRACIE will be on cover of the Philadelphia Inquirer tomorrow -- MONDAY, JANUARY 30TH!  Be sure to pick up a copy! (Normally, one has to commit murder today to get front page coverage!)
Charlie is back on the national charts with BABY DOLL, proving you are never too old to
R-O-C-K!
With his new ABKCO CD "FOR THE LOVE OF CHARLIE" and book of memoirs coming, there's still lots to learn from the unassuming man who ushered in the Philly Sound who is beloved around the world! 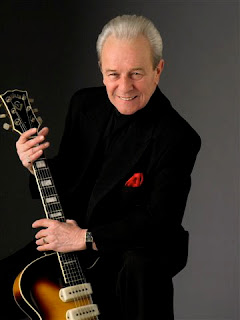 Well, maybe not commit murder ... but "Baby Doll" IS a "killer" new track from Philly's original rocker.  Glad to see he's getting some mileage out of this ... this album's been a long-time coming!
Speaking of which, you'll find more on Charlie Gracie's new CD on WCBS-FM.com (courtesy of Frank B.)  Man, we've been telling you guys about Charlie's new sessions for over a year now ... 'bout time the rest of the world caught up!  (lol)  kk
Kent ...
Here's a story about one of our favorite guys.
Frank B.
Click here: Charlie Gracie, 75, is back with a new rock and roll record - Philly.com
Kent:
Mel Carter has finished filming his new video in Los Angeles for “Crying in the Chapel.”  It can be viewed at: http://youtu.be/jjHRgPgKpqA
“Crying in the Chapel” is one song of 12 available on Mel’s new CD, “The Other Standards,” available www.mel-carter.com and www.cdbaby.com
We featured a couple of tracks from Mel's new CD last week in Forgotten Hits ... now you guys can check out his new video, too!  (kk)
How about a short bio on Question Mark and the Mysterians? Saw them  live at Ravinia one summer and his appearance on TJ Lubinsky's show was FANTASTIC ... to say the
least!  Excellent musicians, great keyboard sounds and what personality!
96 Tears one of the Greatest Garage band records ever!!!!!
Carolyn
If somebody is up to putting something together on ? and the Mysterians, I'd be more than happy to run it.  Rock And Roll Roots Host Bob Stroud told me a story one time about how he once opened a show for ? and the Mysterians and then stuck around to see the headliners perform ... and was blown away by their performance.  He went backstage to tell them how great they were and referred to ? by his real name, Rudy Martinez.  Martinez immediately shut him down, telling Stroud, "It's Question Mark".  (Some guys just can't take a compliment!!!  lol) I've never had the pleasure of seeing them live but I hear it's a pretty wild show.  Again ... if somebody out there would like to take on this project, drop me a line!  (kk)
Kent,
You are correct in that the Kingsmen had other songs besides LOUIE LOUIE. I always
liked their version of MONEY and one of their 1965 songs ANNIE FANNIE held its own here
in OKC. The song you posted, JOLLY GREEN GIANT, even though it was not a number one
song, was always number one with a man by the name of Del Monte.
Larry Neal
Posted by Kent Kotal at 7:10 AM