Every Once In A While We Get It Right

EVERY ONCE IN A WHILE WE GET IT RIGHT:

It doesn't happen very often ... but every once in a while we get a potent reminder of just how powerful this music that we love really is. It touches us in different ways ... and sometimes it speaks directly to us ... we may interpret a song one way on any given day based on our mood at that moment in time ... and at another time ... in another mood ... that same song may cut through to our very soul.

One of our Forgotten Hits Readers shared such a story with us this past week. Our point here is certainly not to capitalize on, exploit or sensationalize someone else's grief ... and we share this with you only because the parties concerned
gave us permission to do so ... but rather our intention is to simply prove again why music is such an important part of our lives ... it can provide the soundtrack to memories that will never leave us ... it can heal us when we're down and need it most ... it can make us laugh, smile and dance ... or cry. It is when it speaks to us personally that it is the most powerful ... and THAT is the purpose of today's piece.

Last week, after we had a little fun with Alan O'Day's #1 Hit "Undercover Angel" ... and featured the title track from his brand new CD, "I Hear Voices", I received this very moving email from one of our Forgotten Hits Readers:

We lost our little granddaughter two weeks ago. Alan's "I Hear Voices" is just what we needed to hear this morning. I'm sharing this delightfully uplifting song with her grieving parents.

Please pass this on to Alan and let him know there are no coincidences. This tune arrived at just the right time.

Thank you, Alan, for all the music; and thank you Kent for Forgotten Hits!

Naturally, I was touched ... it turns out that David and I have granddaughters about the same age. After my response to him, I forwarded his note on to Alan O'Day, whose track, "I Hear Voices", we featured the other day on The Forgotten Hits Website along with what we considered to be a pretty humorous response to another reader's question about Alan's #1 Hit "Undercover Angel." We could have NEVER known or even suspected that that tongue-in-cheek piece could have led to something like this.

David:
What does one even say at a time like this??? There really are no words.
Don't EVER underestimate the power of music ... it touches us all in different ways ... and sometimes, when it's really magical, it speaks directly to us ... If somehow, someway ... even in the SMALLEST way ... and if only for a matter of seconds ... Forgotten Hits helped to relieve some of your pain today ... it makes everything else we do seem that much more worthwhile.

I know it's personal ... and naturally I'll respect your wishes ... but your little note today speaks VOLUMES as to just how powerful music really is. I passed along your email to Alan O'Day ... and I'll forward his response to you when he replies. Just know that your letter touched each and every one of us today.
kk

Your email forward from David, and your own comments, made me feel proud and humble. Just as he feels my song was a timely gift, his sharing, through you, is a gift to me at a time I'm facing some personal challenges. May I ask you to share this with him, including:

David, I never had children of my own, so sometimes I see them with a "songwriter's perspective", as beautiful visitors sent to teach us about life, as we teach them. I've been lucky to write songs for other people's kids (the Muppet Babies TV show and National Geographic's Children's Videos). I don't know you or your family, but I do know loss; of course that was part of the reason for the song. I send my heartfelt condolences to all of you, & please know that your note touched me deeply.

There truly are no words. Bad stuff is happening all around us. Our daughter and her hubby are getting through their tragedy slowly; it'll take a long time for sure. They've shown strength and maturity I know I didn't possess at their age.

75% of the people you meet on the street have stories of tragedy and pain happening either now or in the past. The other 25% just haven't had theirs hit them yet.

The music and the stories you share on FH help me, and others, get through this middle-age muddle. Many thanks for choosing that particular track today. I saw an online article today that mentioned Alan had done a gig here in Nashville just a few weeks ago. Hopefully he'll do another soon, since it seems he's in and out of town pretty regularly these days. The music is always touching us with great power ... and Alan is so right about kids. They are sent as our guests for just a short time. We don't own them. They teach us an awful lot if we're paying attention.

>>>75% of the people you meet on the street have stories of tragedy and pain happening either now or in the past. The other 25% just haven't had theirs hit them yet. (David)

Incredibly, three days after receiving David's last email I got a call from my brother Mark out in San Francisco. He had spent ten days in a hospital there about a month ago where they ran a battery of tests trying to figure out why he was having such bad abdominal pains. After being released for three weeks only to have the pains worsen, he went back in, where THIS time they diagnosed him with pancreatic cancer! How on earth they missed this a month earlier is beyond ALL of our wildest imaginations ... but THEIR take on it is that what was believed to be just a small cyst on his pancreas has now developed into a massive-sized, inoperable tumor. The prognosis is not good ... only about 2% of patients recover from this stage of cancer. Untreated, life expectancy is about 8-12 weeks ... with successful chemotherapy, that could stretch to 8-12 months ... but still an INCREDIBLY short amount of time when weighed against the fact that they didn't even know that this existed a month ago.

Many of our readers have come to know Mark in some fashion through our Forgotten Hits Newsletter. We don't ask for your prayers often, but we ARE asking for them today. We recently reran the article about Jimmie Rodgers' miraculous surgery from two years ago ... a success his whole family believes to be a result of all the prayers they received from Jimmie's many fans around the world. Maybe between all of us we can pull off another miracle. Mark's daughter is scheduled to get married this August ... and he really needs to be there for that. Perhaps we can rally together and inspire him to fight this as best he can in order to best enjoy whatever time he has left. And who knows ... Mark just may prove to be one of those 2% that rebounds from this horrible thing. (And why shouldn't he be??? SOMEBODY's gotta fill those spots!!!)

Meanwhile, I know that you'll all understand that I'll be cutting back on Forgotten Hits for a while. I just feel that my heart's not really in it to give you a quality product at this time. I'll post what I can, when I can ... but most of my energy is going to be spent in other areas for a while.

Thank you to everyone who has supported our cause over the past ten years ... you'll never know how much it has meant to me. I appreciate each and every one of you ... and need your support more than ever today. 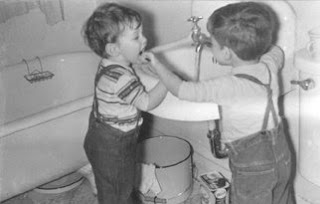 I helped him brush his teeth way back when ...

maybe through your prayers I can help him with an even bigger challenge today.