The Monkees perform a sold-out show at Olympia Stadium in Detroit, Michigan.

This week's edition of The New Musical Express reports that The Monkees will likely film an episode of their television series in Great Britain during their visit there in February.

San Francisco hosts the first ever "Be-In" at Golden Gate Park, featuring live performances by Big Brother and the Holding Company, The Grateful Dead, Quicksilver Messenger Service and The Jefferson Airplane.  Also in attendance … Hell's Angels.  Billed as "The Human Be-In:  A Gathering Of The Tribes", over 25,000 attend. It was here that Timothy Leary first proclaimed "Turn On, Tune In, Drop Out".  Spotlighting the Haight-Ashbury area, Allen Ginsberg reportedly for the first time coined the term "Flower Power".

Senator Everett McKinley Dirksen (from the great state of Illinois!) appears on The Hollywood Palace this evening, performing his surprise hit "Gallant Men", which currently sits at #33 on this week's Super Chart.

The Rolling Stones' brand new single "Ruby Tuesday" / "Let's Spend The Night Together" is released in America.  It will become a two-sided hit (although many stations will ban the B-Side due to its "suggestive lyrics".)  Mick Jagger will famously change the title line to "Let's spend some TIME together" when The Stones perform the song on The Ed Sullivan Show the following night at Sullivan's request.  (Or would that be insistence???)

The top premiers on this week's chart include "The Beat Goes On" by Sonny and Cher, the Motown classic "It Takes Two" by Marvin Gaye and Kim Weston and the garage band classic "The Little Black Egg" by The Nightcrawlers.


Also new on the chart this week are a couple of middle-of-the-road / soft rock gems … "Tiny Bubbles" by the late, great Don Ho (#97) and "Then You Can Tell Me Goodbye" by The Casinos, one of my favorite songs of the whole year.

Paul McCartney and Ringo Starr go to the Bag Of Nails club in London this evening where they see Jimi Hendrix perform for the first time.  (McCartney would be blown away six months later when he saw Hendrix again, this time performing the title track from The Beatles' brand new album "Sgt. Pepper's Lonely Hearts Club Band" just four days after its British release.)

Otis Redding ("Try A Little Tenderness") and Dino, Desi and Billy make appearances on "Where The Action Is".
Posted by Kent Kotal at 6:00 AM

Dr. James Bedford becomes the first person to be cryonically preserved with intent of future resuscitation.  (Not quite "Disney On Ice" … but historic nevertheless)

A reboot of the popular late '50's TV Series "Dragnet" returns to network television.  Creator Jack Webb is back as Sgt. Joe Friday … but his new sidekick, Bill Gannon, is played by future M*A*S*H star Henry Morgan.  (By the way, the word "reboot" didn't exist in 1967) 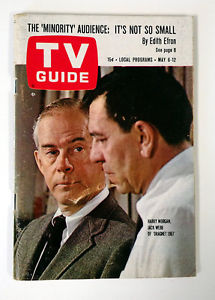 The Seeds appear on "Where The Action Is", performing "Pushin' Too Hard".

Big day in the recording studio today as Jimi Hendrix records the hard-rock classic "Purple Haze" and The Hollies lay down "On A Carousel".


Keith and The Electric Prunes (singing "I Had Too Much To Dream Last Night") appear on "Where The Action Is".

Here are the songs Dex Card was counting down on The Silver Dollar Survey every weekday afternoon this week on WLS ...

And here's how many of those same songs ranked on Super 'CFL ... 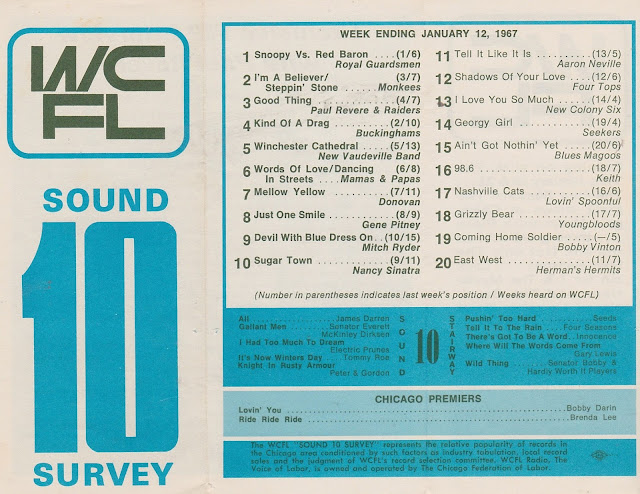 (Note that according to the WCFL Chart "Snoopy Vs. The Red Baron" was still holding The Monkees at bay, hanging on to the #1 Spot for the third week in a row!)
Posted by Kent Kotal at 6:00 AM 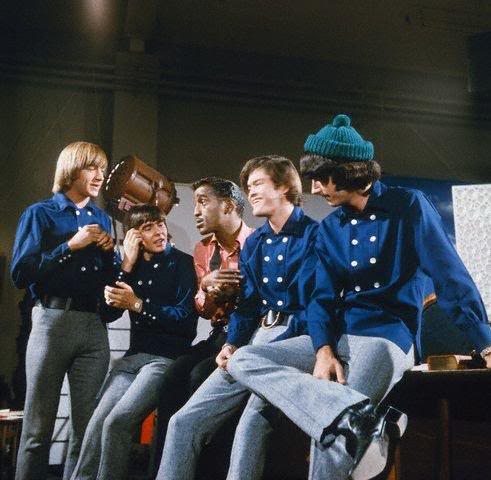 
The Buckinghams make a HUGE leap into The Top 40 this week, climbing from #65 to #37 (that's a jump of nearly thirty places!)  The Bob Crewe Generation ("Music To Watch Girls By"), "Wild Thing" by Senator Bobby and "Bring It Up" by James Brown (#61, up from #92 the week before) all make significant moves this week as well.

The Buffalo Springfield appear on "Where The Action Is".

The Monkees' second album, "More Of The Monkees", is released.  In a few weeks it will displace their debut LP at the top of the national album sales chart.  Later this evening, the episode "The Case Of The Missing Monkee" airs on NBC.  "Steppin' Stone" is the featured song.

New Orleans christens their brand new football franchise "The Saints"
Posted by Kent Kotal at 6:00 AM

We've got a brand new chart (for the week ending January 14th). 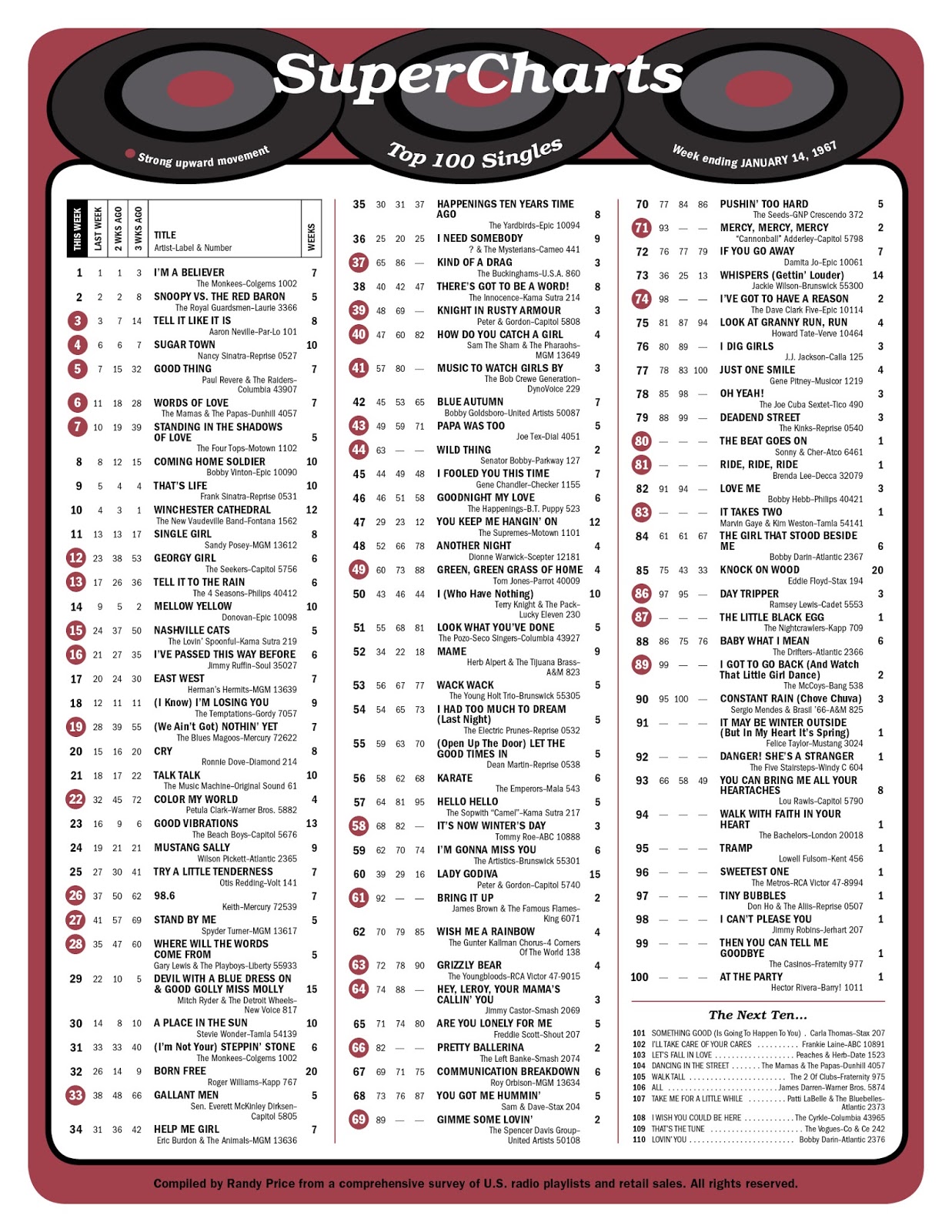 As you can see, The Monkees hold at the #1 position with "I'm A Believer" (their third week on top.)  The Mamas and the Papas sneak into The Top Ten with their latest, "Words Of Love" (up from #11 last week to #6 this week … the B-Side of that record, their remake of the Motown classic "Dancing In The Street" is "bubbling under this week at #104.)  "Words Of Love" is the only new Top Ten entry on this week's chart.

Meanwhile, The Monkees also have the #1 Album again this week as their debut album "The Monkees" holds down the top spot on the LP Chart for the tenth consecutive week.
Posted by Kent Kotal at 6:00 AM