kk:  Man, you guys have got some MAJOR, high-profile gigs coming up here in the Chicago area over the next several months …
A show backing up America at The Genesee Theatre in March … another sold-out Cornerstones show at The Arcada in May … and then back to The Genesee for this year’s Happy Together Show.  These are some major dates!

CARL:  I was told the Genesee with America is already sold out or very close to it. The Cornerstones show at the Arcada looks to be another sell out as well.  (We’ve got another Cornerstones show coming up in Oshkosh, Wisconsin, in August … and then return to The Arcada again in November.)

kk:  The show with America isn’t a normal pairing for you guys … but I think it presents an interesting dynamic.

CARL:  I am really looking forward to the August 6th show with America at the Genesee. Playing on the same bill with America is special, as I have always been a big fan of their music. It brings me back to my Tufano and Giammarese days, when we were an acoustic unplugged act.
This show will feature the three of us … Nick Fortuna on bass, Dave Zane on acoustic guitar and vocals and me on guitar and lead vocals.  I may even bring my old Martin D-41 from back in my Tufano & Giammarese days.
I hope it will be interesting and fun for our audience to hear the Buckinghams’ hits performed unplugged. There will also be some surprises, playing songs we haven’t performed in many years.

kk:  That sounds like a killer show … fans should check the Genesee Theatre online box office quickly as this show is nearly sold out.
And this is quite the line-up for The Happy Together Tour this year … The Turtles, of course, with Ron Dante back on lead vocals, subbing for Howard Kaylan, Chuck Negron, formerly of Three Dog Night, Mark Lindsay, former lead singer of Paul Revere and the Raiders, The Association, The Cowsills, who always put on a great show and, new to the line-up this year, The Vogues!
Adding The Buckinghams into the mix for the Chicago area show is a real plus.  You guys have been part of The Happy Together Tour for YEARS now … but aren’t actually part of the touring line-up this time around, correct?

CARL:  We will once again join the Happy Together tour on August 8th at the Genesee Theatre.  (Over the years The Genesee has become a favorite theatre to perform at.)  You are correct in that we are not part of the regular lineup for 2020, but The Buckinghams will play a handful of dates as part of the tour throughout the summer.
The Buckinghams are always grateful to be a part of Happy Together. We have been regulars going back to the very first one in 1985, then the reunion tours in 2010, 2011, 2012, 2015 and 2019. It has always been a great experience to connect with the fans that are so supportive, they are fabulous!

kk:  It blows me away just how popular these Cornerstones shows continue to be.  (Can you believe I haven’t been to one in over two years now?!?!  How can that even be possible?!?!)
EVERY show sells out … it’s incredible … and a lot of it is “repeat business” because the fans just can’t get enough of you guys.  This is a true testament to just how popular this music was here when we were growing up … and it’s an INCREDIBLE show from start to finish.  Even running every six months at The Arcada sparks immediate ticket purchases.

CARL:  Who would have thought “Cornerstones of Rock” would still be going?
Why not … its a fabulous show! The Ides, Cryan’ Shames, New Colony Six, Jimy Sohns, to name a few of the legends of Chicago pop music in those late, great 60’s!  We have another Cornerstones show at the IACH Amphitheater in Oshkosh, Wisconsin, on August 13th … and then back to The Arcada in St. Charles, Illinois on  November 28th.

kk:  I guess I’d better get my November tickets NOW before they’re all gone!
Thanks, Carl, for bringing us all up to date.

CARL:  The Buckinghams have a lot of other great shows coming up, too.  Here’s a list of what’s been booked so far …

Jim asked me to also mention their upcoming gig at Club 10 Live in Highwood, IL on Saturday, March 14th.

And, you can catch The Ides at The Token Lounge in Westland, Michigan on Thursday, March 19th, at The Tangier Event Center in Akron, Ohio, on Friday, March 20th, at Ram’s Head On Stage in Annapolis, Maryland, on Saturday, March 21st, at The Hamilton in Washington, DC on Sunday, March 22nd, on Tuesday, March 24th at Jergel’s Rhtyhm Grille in Warrendale, Pennsylvania, at The Northern Lights Theatre at Potawatomi Casino in Milwaukee, Wisconsin, on Thursday, April 23rd and a the Acorn Theater in Three Oaks, Michigan, on Saturday, May 9th … a GREAT chance for some of you out-of-towners to catch this act that we’ve been raving about for all these years, live in concert in a city near you.  (And, of course, they’re also part of all of the Cornerstones Of Rock shows mentioned above.)

THIS JUST IN … BREAKING NEWS:  The Ides Of March will welcome Award-Winning Blues / Rock Artist Anthony Gomes as their Special Guest at their City Winery show on March 4th.  (Anthony was part of Jim Peterik’s World Stage Show last month.)  Again, email me NOW for your chance to win a pair of tickets to see this show.

And, speaking of great shows (and free ticket give-aways!), we’ve also got tickets for Forgotten Hits Readers to see The Four C-Notes, The Midwest’s PREMIER Frankie Valli and the Four Seasons Tribute Band.  They’re appearing at The City Winery on Wednesday, February 19th, so if you’d like to see THIS show, we need your entry in by Monday Night (2/10).

You can check out our review of their City Winery performance last year (which also includes a City Winery Ides Of March review) here:
https://forgottenhits60s.blogspot.com/2019/03/forgotten-hits-mini-reviews.html

And finally (or, as they say, last but CERTAINLY not least!) we’ve got a pair of tickets to see Beach Boy AL JARDINE at The City Winery on Tuesday, March 31st.  This is another “Must See” Performance …
https://forgottenhits60s.blogspot.com/2018/04/al-jardine-concert-review-part-1.html

Get your entries in NOW for a chance
to win tickets to these three great shows!!!

Just send me an email at kk@forgottenhits.com and let me know which show(s) you’re interested in SEEING …
but you’ve got to hurry ...
because these shows will be here before you know it!
Posted by Kent Kotal at 7:00 AM

LOTS of great shows coming to our area over the next few months ...

Be sure to check each venue's website for new additions.

Meanwhile, here are just some of the acts we can all look forward to seeing ...

Be sure to stop back tomorrow to check out our Quick Takes with Carl Giammarese of The Buckinghams and Jim Peterik of The Ides Of March!

Both of these artists (and their groups) are nominated on the first ballot for the brand new Illinois Rock And Roll Music Hall Of Fame.  That ballot closes next Friday (February 14th) and you must be a charter member in order to vote … which is a relatively easy thing to become.  (Click on the link below for all of the details.)

Meanwhile, check out this list of first time nominees ...

The induction ceremony will take place on Sunday, March 29th … tickets for this are also available thru their website … (lots of other cool details and information there, too!):  https://www.roadtorock.org/

THIS AND THAT:
Wow Kent !  Thanks for explaining and examining all the survey information.
I appreciate the time you put into researching the numbers.  Good Guy!
And l like the picture of you and your daughters with Walter Payton from 1993 ... you are so lucky!
And, to respond to Voss's comments about Harry Harrison, my being from the NYC area, I remember "Good Guy" Harry very well.  I even remember an interview he had with George Harrison when George said that his father's name is also Harry. So two "Harry Harrisons."
So sorry to hear about the loss of Harry.  He truly was a good guy.
I came across a picture of a much-coveted item from back in the day ... "a good guy" sweatshirt.  The station would give them away to listeners if they were a certain number caller, ie, caller number 57 gets a free sweatshirt.  I even had one!
And, speaking of Harry, God bless him and thanks for the music, Harry. May he rest in peace.
Sandy 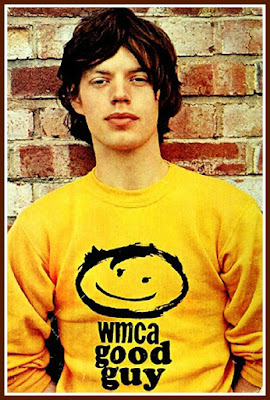 Of course, for DECADES it was believed that perhaps the most famous WMCA Good Guys shirt appeared on the cover of The Beatles’ “Sgt. Pepper’s Lonely Hearts Club Band” album (worn by a Shirley Temple doll!) … along with the words “Welcome The Rolling Stones” … but we have since learned that it ACTUALLY said “WMPS Good Guys Welcome The Rolling Stones.”  WMPS was a big Top 40 radio station out of Memphis, Tennessee, and not New York. (kk) 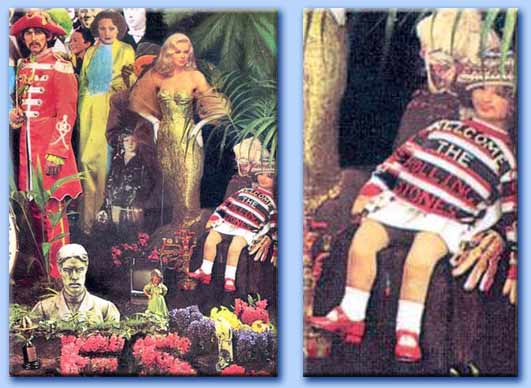 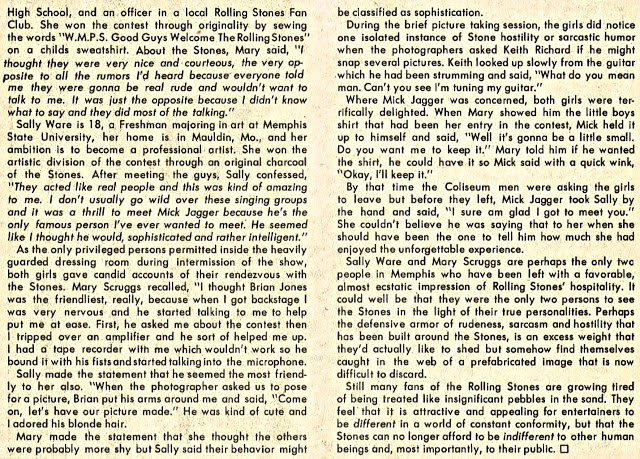 I’ve always thought there were similarities between “Suzie Q” and “In-A-Gadda-Da-Vida.”  They may have been cut by The Wrecking Crew.
Lester Remhof
As far as I know, Creedence Clearwater Revival and The Iron Butterfly were self-contained bands who played all of their own instruments on their records without any studio musicians support.  (Those are two pretty heavy tunes for The Wrecking Crew!!!)  By this point, with music taking on a much harder, FM-edge, I think the best days of The Wrecking Crew were already behind them.  (kk)