An Interview With John Madara

Our recent series spotlighting the career of JOHN MADARA has moved over to The FORGOTTEN HITS Web Page ... you can find ALL kinds of interesting tidbits here on specific recordings and artists. Meanwhile, we've put together the best of our interview segments to post on the Forgotten Hits Blog Page.

Although JOHN MADARA had his GREATEST success on the OTHER side of the recording glass, he got his start as a singer trying to launch a solo career. I asked him to tell us a little bit about those early days.

FORGOTTEN HITS: Had you always wanted to be a singer? Did you come from a musical family?
JOHN MADARA: Not at all. I was the only one of six children interested in music. I was born and raised in Philadelphia, living in the projects my whole young life and quitting school when I was 17 and going out to work full time to support my brothers and sisters. The one passion that I had from around 14 years old was singing. I would love to sing along with the current records -- Johnny Ray, Tony Bennett and Guy Mitchell. Eventually I was singing along with The Clovers, The Moonglows and Billy Ward and The Dominos. I just loved the music so much. So while working three jobs, I found the time to take vocal lessons, which led to my making my first record, "Be My Girl." which I paid for myself. 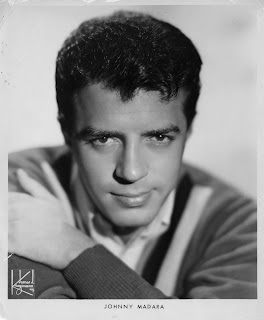 FH: It's not a bad record ... but not a major success either. Did that in some fashion push you into the other areas of the music business that you ultimately pursued?
JM: I was signed to Prep Records, which prevented me from recording "Do The Bop" or "At The Hop" for another label. After "Do The Bop" was not accepted by Capitol, I did record some additional sides for Prep, which was their subsidiary label. But nothing happened with these. These were things that I had nothing to do with writing or producing. After seeing the success of "At The Hop" and with Danny and The Juniors being on the road, I did write a couple more of the Danny and The Juniors records,one being "Dottie".
(EDITOR'S NOTE: DOTTIE ultimately peaked at #41 on BILLBOARD's Top 100 Chart. JOHN ALSO produced DANNY AND THE JUNIORS' Top 20 follow-up hit to AT THE HOP, ROCK AND ROLL IS HERE TO STAY.)
JM: Afterwards, I did record a few more sides as a solo artist. One of the songs David and I wrote was called "I'm So Alone," which was one of the first songs we wrote after "At The Hop." All of my records always got a lot of play in Philly, and I was a big star in Allentown, PA. But after opening up my record shop and hooking up with David, the writing and the producing seemed to really fulfill my creativity, though we did make some more Johnny Madara records, "Good Golly Miss Molly"and "Vacation Time," which made the national charts and "Heavenly." (EDITOR'S NOTE: I don't show ANY of JOHNNY MADARA's solo records reaching the BILLBOARD or the CASH BOX Charts ... I think that, in all likelihood, these were "regional" Philadelphia hits.)

FH: Meanwhile you and DAVID WHITE were starting to score more hit records working with OTHER artists.
JM: Yes, David and I were starting to have a lot of chart records and that really took up all of my time. In fact, I did not get a chance to record for about 2 years, when we did "The Spokesmen -- The Dawn Of Correction." The Spokesmen also had a version of The Beatles' "Michelle," which also made the national charts.

FH: Your website, ThatPhillySound.com, is now offering a NUMBER of these original recordings for sale as various CD compilations.

Click here: Rock & Roll, Sound of Philadelphia, Music, 50s, 60s - That Philly Sound JM: After David and I broke up, I did make a couple of more records, and I'm having all of my recordings digitally restored right now. I would love to send you a couple of those later recordings that I did with Daryl Hall and John Oates singing background. 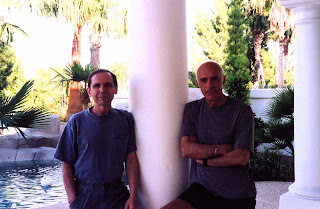 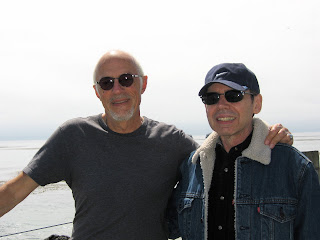 (A couple of recent photos of John Madara and David White)

FH: Meanwhile, you're STILL recording today, aren't you???
JM: Last year I had a chance to do a reunion with The Pixies Three and recorded with them for a CD they were doing and for a show called "The Best of The 60's Girl Groups." The song is the Ray Charles' classic "What'd I Say." This is the latest thing that has my voice on it as of a year ago. It was a lot of fun doing it. There's a part of me that would love to do a CD with all brand new original songs. I think my chops are still pretty good, and it would be a great challenge to do a real contemporary CD.
FH: I think it's great that you're still involved with all this stuff ... putting out the compilation CDs of your earlier work, putting together the AT THE HOP Movie and even lending your vocals to a track now and then! Music really HAS been your whole life!
JM: Music is the ONLY thing I ever wanted to do ... and I've been VERY lucky over the years to have been involved with some VERY talented musicians and recording artists. The constant creativity of working on the "At The Hop" film and a trance dance instrumental CD that I have been working on for the last year are very rewarding, but there will always be a part of me that misses singing.
FH: You had mentioned earlier that you were restoring a number of these old recordings ... are you still coming across some things that you had forgotten about?
JM: I'm always finding things. I just found a master that I did in 1973. I HAD to record singing something with the Wrecking Crew ... and this one was never released. It's our version of "One Fine Day", the old Chiffons hit. And I found some recent photos of a session I did with Tony Danza and Artie Butler ... I cut some tracks with Tony Danza and they're pretty good. The background singers on "The Waters" are Artie Butler and myself. I found some recent photos of Dave White and myself, including a picture of Dick Clark receiving a special award for the sale of twenty million 45 records of “At The Hop” with David and myself. There's a photo of Walt Gates (he was the piano player on “At The Hop”) and myself ... The Pixies Three with Brooks Arthur & Madara & White and another of Joe Renzetti with Madara & White.
FH: You had the opportunity to work with a NUMBER of artists who went on to have GREAT success in the '70's and '80's ... DARYL HALL and JOHN OATES, KENNY GAMBLE and LEON HUFF ... in fact, you'll find ALL the details to these early sessions now posted on our FORGOTTEN HITS Web Page:
Click here: Forgotten Hits - John Madara Remembers ...
However, I get the sense that your early nurturing hasn't always been recognized and appreciated by some of these artists ... hopefully, I was able to make some of these points in this series. This and the fact that you had to SHARE credit for some of your earlier efforts like AT THE HOP and 1, 2, 3 with artists who had absolutely NOTHING to do with the writing of these songs. Suffice to say the music business easily lives up to its reputation as being a pretty dirty business!
JM: Kent, I have sent you many stories, but the one thing I don’t want to come off as is that I am complaining or unhappy with the music industry. I would like this series to be the story of my career and some of the different events that have not only happened to me, but to many other artists, writers and producers as well. I have a tremendous amount of respect for the talent of Gamble & Huff and Hall & Oates and I don't ever want to come off as bitter about any of the different relationships that I’ve had in my career ... but I do want to set the record straight. I am very happy to have been a part of the music that I love so much, and it has been a joy to have created the music that I have been responsible for and a joy to have worked with all of the talented artists throughout the years. My career has been more than I could have ever hoped for. The last thing that I ever want to do is to come off as being ungrateful.
FH: I appreciate that, JOHN, and I think our readers will, too, once they read some of these chapters posted on the website. I am still VERY honored that you chose FORGOTTEN HITS as the means to tell your story.
JM: I know that you are going to do a great job with this series. This is the first time that anyone has ever done a story on my career. I am very grateful for your interest in my life. As I stated before, no one has ever documented my career, and overall it has been a great ride!
Click here: Forgotten Hits - John Madara's Greatest Hits