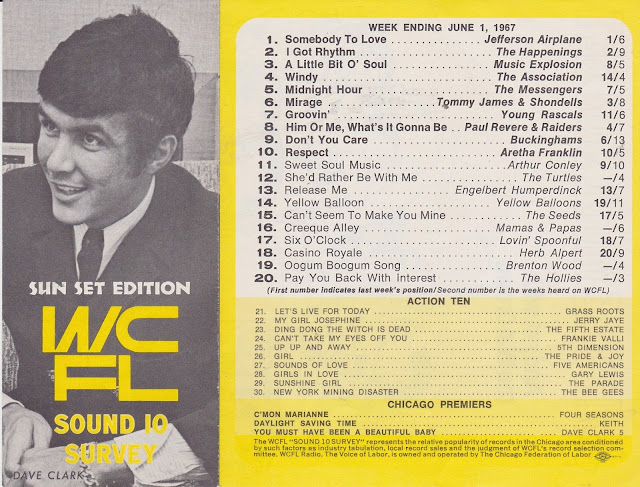 Columbia and RCA announce that they are raising the price of their albums by $1.00 … the first increase since 1953.  That means mono LPs will now cost $4.98 … and stereo albums will be a buck more.
Posted by Kent Kotal at 6:00 AM


Paul Revere and the Raiders were scheduled to perform a three night stand (May 26th, 27th and 28th) beginning tonight at The Arie Crown Theater in Chicago.  (Can you imagine these guys packing this place for three nights in a row?!?!?  Amazing!) Unfortunately the theater has been closed since the January fire that engulfed McCormick Place.
Posted by Kent Kotal at 12:11 AM 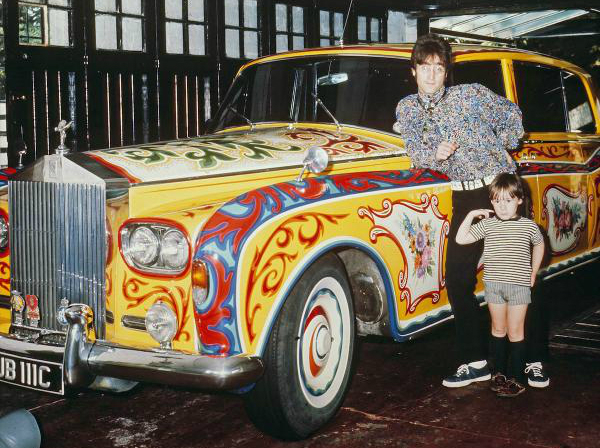 Although George Martin is absent, The Beatles begin work on another George Harrison track, "It's All Too Much", earmarked for the upcoming "Yellow Submarine" soundtrack.

The Young Rascals are in New York City, recording "A Girl Like You", which will become a successful summer single for the band.  (And my personal favorite by them!)

A new Bobby Darin film "Cop Out" premiers … it tanks.
Posted by Kent Kotal at 6:00 AM

You'll find some very notable debuts on this week's chart.  "Windy" by The Association premiers at #64, "New York Mining Disaster, 1941" becomes the first US Hit for The Bee Gees when it debuts at #71, the controversial "Society's Child" by Janis Ian comes in at #83 in its first week on the chart and "San Francisco (Be Sure To Wear Flowers In Your Hair)", a song written by John Phillips of The Mamas and the Papas but given to his long-time friend Scott McKenzie to record, comes in at #99.  (It is soon to become the unofficial anthem of The Summer Of Love ... right on up there with "All You Need Is Love" and "Light My Fire" ... and remains to this day one of my all-time favorites songs of this ... or any other ... era.)


The Jimi Hendrix Experience completes their first European tour with a concert at Tivoli Grona Lund in Stockholm, Sweden.
Posted by Kent Kotal at 6:00 AM

Monkee Michael Nesmith has a tonsillectomy at Cedars Of Lebanon Hospital in Los Angeles.  As a result of this surgery, he will miss the taping of Episode 49 of The Monkees' television series (Monkees Watch Their Feet) on the 26th and the group will have to cancel their scheduled appearance at Spartan Stadium in San Jose, California, on the 27th. 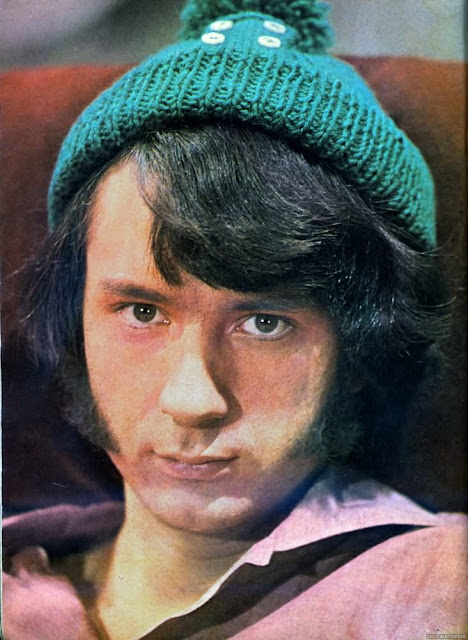 The movie "Stranger In The House", starring James Mason, Geraldine Chaplin and Bobby Darin, premiers in London.  It will not open here in The States until January of next year.
Posted by Kent Kotal at 6:00 AM 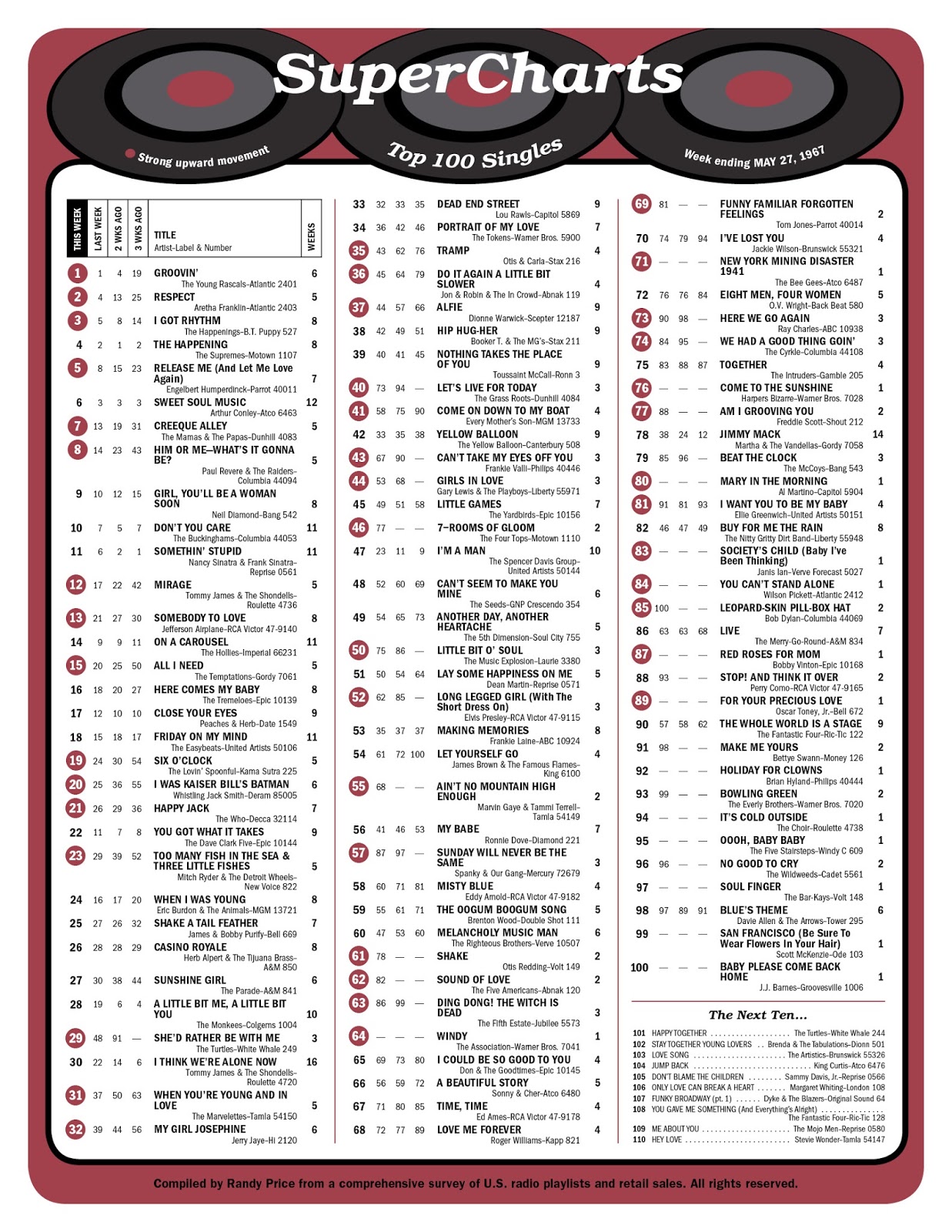 "Groovin'" by The Young Rascals holds on to the #1 spot for a second week as "Respect" by Aretha Franklin, "I Got Rhythm" by The Happenings and "Release Me" by Engelbert Humperdinck all creep up behind it in The Top Five.

"Creeque Alley" by The Mamas and the Papas and "Him Or Me - What's It Gonna Be" by Paul Revere and the Raiders still seem to be joined at the hip, now occupying the #7 and #8 positions.  "Mirage" looks like another Top Ten Hit for Tommy James and the Shondells as it climbs from #17 to #12 this week and Jefferson Airplane seem to have a pretty solid hit on their hands, too, right out of the box as "Somebody To Love" climbs from #21 to #13.

Florence Ballard makes her last appearance with The Supremes on The Tonight Show. (Although she wouldn't officially be terminated until July 1st, she had already been replaced by Cindy Birdsong several times earlier due to her failure to appear for scheduled performances.)

"More Of The Monkees" continues its hold on the top of the chart.  Incredibly, their debut album "The Monkees" is still in The Top Ten … and their brand new album, "Headquarters", released today, will soon join the fold!  It will go on to become their third straight album to top the charts.  (In fact, in 1967 alone, The Monkees would hold the top album spot for an incredible 33 weeks!  Save the week ending June 17th, The Monkees would have the #1 album in the country for 24 out of the first 25 weeks of the year … including THIS one as "More Of The Monkees" begins its 15th week at #1 on the US Chart!

"Headquarters"'s reign at the top would be short-lived however … the following week they will be knocked out of the #1 spot by a little album called "Sgt. Pepper's Lonely Hearts Club Band" … which would hold on to the top spot for the next fifteen consecutive weeks. (Don't feel TOO bad for The Pre-Fab Four ... there was little that could compete with the forever life-changing "Sgt. Pepper" LP ... meanwhile,"Headquarters" spent eleven of those fifteen weeks at #2 ... which ain't too shabby for a made-for-TV group that was suddenly producing itself in the recording studio!)

"Headquarters" was a landmark, break-through album for the band.  After much negative press about how The Monkees didn't play their own instruments, the band painstakingly went through take after take after take to make this album on their own terms.  (It was part of their new deal with Colgems Records … which ultimately saw their musical director Don Kirshner fired.)

The back of the LP (a version of which showed photos of three of The Monkees with beards! … that was quickly withdrawn in order to maintain their clean pre-teen television image) boasted:  "We aren't the only musicians on this album, but the occasional extra bass or horn player played under our direction, so that this is all ours.  Each one of us has some musical thing, from Manchester to Texas, from the East Coast to the West, and when four people just go with their thing, what comes out is a whole.  Don't ask 'a whole what?' Just listen.  If only the smallest part of how much fun it was to make this record gets heard, it was all worthwhile."  Album credits then list Michael Nesmith on pedal steel guitar, six-string and organ, Davy Jones on tambourine, jawbone, maracas, etc., Micky Dolenz on drums and guitar and Peter Tork on keyboards, twelve-string, bass and five-string banjo.  Also credited are Vince DaRosa on French horn, Fred Seykora on cello and Producer Chip Douglas on "occasional bass."  (Douglas produced the album under his real name, Douglas Farthing Hatlelid.) 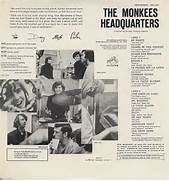 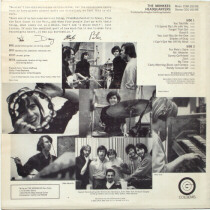 Back at Expo '67, The Ed Sullivan Show brings us Petula Clark, who performs "Don't Sleep In The Subway", "This Is My Song", and a medley featuring "I Know A Place", "Je Me Sens Bien", "My Love" and "Downtown".  The Seekers are also on hand and sing their big hit "Georgy Girl".


Sonny and Cher are among the guests on The Smothers Brothers Comedy Hour this week.

"Don't Look Back", a documentary covering Bob Dylan's 1965 tour of England, strikes box office gold for a week.  (The film also features appearances by Joan Baez and Donovan).  The film is one of the first documentaries to spotlight a popular music artist, a fairly common practice today but a ground-breaking concept for 1967.  (This ain't no "A Hard Day's Night" or lightweight Elvis musical fare!)
Posted by Kent Kotal at 6:00 AM