Our Salute To American Top 40 Coninues ...

Kent:
I really enjoyed reading your thoughts and memories about the 50th anniversary of American Top 40 with Casey Kasem.  As a guy who has spent his entire teenage and adult life working in radio stations, the syndicated radio show that had the most impact on me personally was Casey’s AT40.  Once the show ramped up, many months after it debuted and they had a chance to dot their I’s and cross their T’s, it was the BEST OF THE BEST.

Little did I know as a baby DJ in the 70s spinning the AT40 discs on Sunday morning at New England radio stations, that one day I would become Casey Kasem’s boss!

In the late 80s, I was the VP of Programming for the ABC Radio Networks.  ABC owned the Watermark production company, which produced Casey’s show.  Part of my responsibilities was being Executive Producer of AT40.

I have so many phenomenal memories from those years.  Here are just a few of them:

· Over the years, AT40 used seasoned and high caliber radio talent to sub for Casey during his vacations.  The roster included Charlie Van Dyke and Wink Martindale. I had the idea of using well known AT40 artists to guest host, which wasn’t always easy to do.  You could only use pop and rock stars who could read aloud smoothly for a 4-hour countdown.  It took discipline, enthusiasm, and a will to succeed at something they had not done before. Daryl Hall and John Oates were the first artists ever to host.  It was July 30, 1988.  They did it while in L.A. for a sold-out show at the Universal Amphitheatre, which was a couple of minutes from the Watermark Studios on Cahuenga Blvd.

· During my tenure at Watermark, we made the transition to digital.  And under the supervision of our Watermark GM Rod West, we went from sending radio stations the show on four (4) vinyl discs to mailing out four (4) CDs weekly.  We saved a great deal of time editing the show once we switched to digital.

· When I arrived at AT40 the incredible support staff of writers, producers and statisticians where religiously following a policy that they would NEVER give Casey a story about an artist if they couldn’t get at least two sources to verify it.

· In every show, Casey would acknowledge some of the great radio stations that aired the show.  It would include all size stations from major market affiliates to the smallest of the small.  Because Casey was not familiar with a lot of these smaller markets, the AT40 staff would call every affiliate before Casey did a shoutout and verify how their city of license was pronounced and what their current station slogan was.  Once a radio staff learned AT40 had called and their station was going to be singled out on an upcoming broadcast, the staff was stoked.

· I’ve attached the audio of the final closing credits that Casey delivered at Watermark in 1988, before Shadoe Stevens took over the following week.

· The AT40 logo, which changed over the years, would be seen on the discs sent to radios stations across the world every week. Knowing how much the legacy of the show meant to me, the staff had some fun and surprised me one year and had some CD boxes printed with a modified logo that had my name on it as host!!  I still have one in my archives as a souvenir from my memorable years at American Top 40. 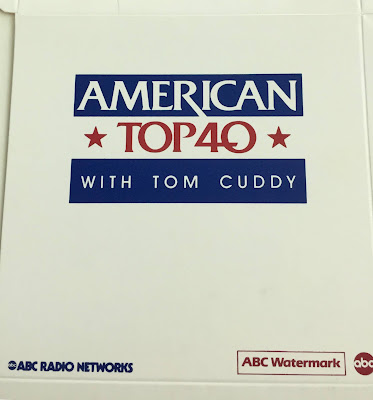 Well, Kent, since you asked for some thoughts about American Top 40 on the occasion of its 50th Anniversary, here you go. 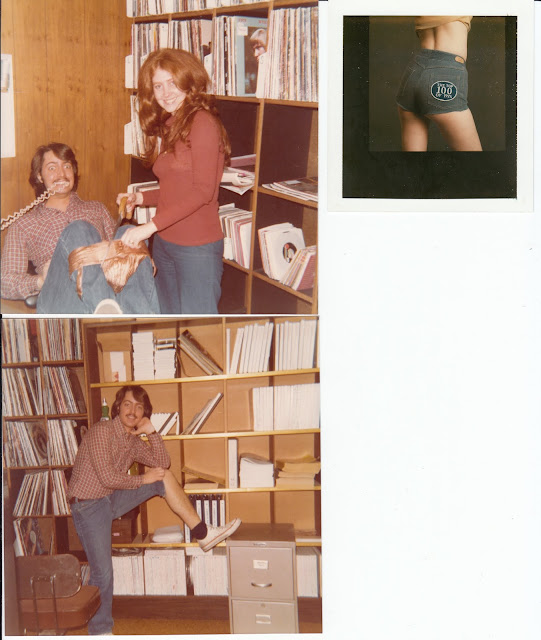 Here are a couple of photos.  (The redhead in the photo with me is statistician Sandy Stert-Benjamin.)
Scott

Thanks, Scott … glad you “bent the rules” a little bit to run your copy in Forgotten Hits!!!  (See folks, THIS is the kind of insight and interview material we can offer in the future as Scott goes thru his archives … man, I can’t WAIT to welcome you aboard!!!)
SO cool to be able to share some hands-on insight to this radio phenomena through guys like Tom Cuddy and Scott Paton who were instrumental in bringing us this show every week ... and were there right in the thick of it!  (kk)

Kent,
A friend of mine and the late Clark Weber weighed in on AT40 from a different perspective:  as a military flier.
Clark Besch
Clark,
I read this last night.
American Top 40 and Casey Kasem were BIG on AFRTS (Armed Forces Radio & Television Service). I worked a bit with the station on the Midway and a bit with the station on Subic Bay, Philippines. When they saw that I was listening to or distracted by American Top 40, they made the comment that if there is a glitch in the broadcast they will hear about it 10.000 times over and it will be immediate. Their comment was that only a glitch in a Paul Harvey transmission could generate as much or more immediate traffic. And they probably played each weekly episode five or six times during "easy listening hours" of 7:00 AM to 11:00 PM and it was always somewhere in the middle of the night. The Midway's system was three audio channels and two video channels. Subic Bay was two audio and two video channels then we also got Clark AB's system of 2 & 2 as well as Philippine TV which was 50/50 in English.
I loved listening to American Top 40 and knew the AM frequencies as well as some HF frequencies it was aired on. When airborne at the right times I would often tune the AM / ADF radio or try and hijack an HF radio for the transmission.
I agree, like the great DJs of the 1960s Casey talked WITH his audience, not AT his audience. Seldom, if ever, did I feel alienated or maligned by an American Top 40 broadcast. Sometimes I grunted at the #23 hit or the #1 hit simply because I did not like it. However, I loved the variety, based on sales and play.
There was another DJ, a Jewish Rabbi, from about 1975-1990 that was just fun to listen to as well.
Thanks, this one had me sitting on the couch just remembering good times,
Rex

I found Gary Theroux's comments about correcting Casey Kasem on that ELO mistake interesting.  The fact that he got so upset with the mistake makes me wonder about something ...
I befriended the original statistician for AT40, Ben Marichal, back in the 70's.  Back then, HE had tons of Billboards just like Joel Whitburn and he had planned to do what Joel did and does today with compiling the Billboard charts, but Joel "won out."
I wonder if he was ousted by Casey's staff after a few mistakes like the ELO one?  Ben emailed just five years ago and said that he had already written part of a book about AT40.  He said he had 1968-1972 done already.  Wish I could read THAT part if it is out there somewhere.
Wondering if Gary or Scott Paton or Paul Haney has ever ran into Ben.  We were pretty good friends thru the 80's when I lost touch. He emailed out of the blue in 2015.
Clark Besch

>>>And we're just one tune away from the singer with the $10,000 gold hubcaps on his car!   (from Casey Kasem’s first American Top 40 Broadcast)

One of Casey's first " TEASES " on the first show.
I got this right from the horse’s mouth … Mark Lindsay.
The singer with way too much money to spend was Mark Lindsay, lead singer for Paul Revere & Raiders, who had a solo hit, "SILVER BIRD," on the first American Top 40 Chart.
FB

Kent:
You wrote that AT40 was distributed as one hour per disc and that the DJ had to flip the record during the commercial break.  That is not true.
The half hours were split over the three (later four) hours.  The shows
were shipped as follows:
1A/2B 1B/3A 2A/3B
1A/4B 1B/3A 2A/3B 2B/4A
You can see my collection here: http://vidiot.com/AT40
I stopped collecting in 1980.  The last LP set was the one that covered
the death of John Lennon (12/13/80).  But, the initial set that the stations received was cut before John was shot.  After news of the shooting broke, they shipped out a new 1A/4B for the stations to air.  I have both discs in my collection.
John's song, "(Just Like) Starting Over" was #4 that week, so disc 4B was
the one that needed replacement.
As for Billboard, I had a subscription over many years.  Yes, it was expensive … so I knew of its existence.
Mike Brown
Billboard was MEGA-expensive … so I think I only kept a subscription for a couple of years.  (When 80% of the reason you want the magazine is only for the Top 100 and Top 200 Charts, it just became cost prohibitive.)
It sounds like each disc WAS essentially still a half hour (of programming) per side … looks like the way you’ve got it described, they could “stack” the discs on a spindle to drop and play in order … but I’d be REALLY surprised if ANYBODY did that in a studio enviornment (other than perhaps a collector at  home.)
How well do the charts hold up all these many years later?
As has been pointed out here numerous times before (more so by our readers and fellow chart-a-holics) these charts were merely a photograph capture of time … popularity at that moment.  SO many of these tunes barely registered with most of us … but there are probably AT LEAST another half dozen or so per chart that ARE etched in our memories … and THOSE are the ones we wish radio would recognize and remember from time to time.  Not in heavy rotation … they don’t merit that … but as the some of those affectionately revered “Wow! Songs” we refer to so often.
Two Billboard hits that IMMEDIATELY come to mind that I discovered on Casey Kasem’s show because they weren’t played here in Chicago were “Holdin’ On To Yesterday” by Ambrosia and “Everybody’s Got To Learn Sometime” by Korgis … I went out and ordered them as soon as I heard them (because you couldn’t buy ‘em here either!!!)  kk

Kent,
Here's how the show was plugged in Ron Jacobs’ home state of Hawaii this week in 1970 in the Honolulu newspaper.
Ron was also behind those cool "Cruisin'" radio recreations at that very time on Increase records.
Clark 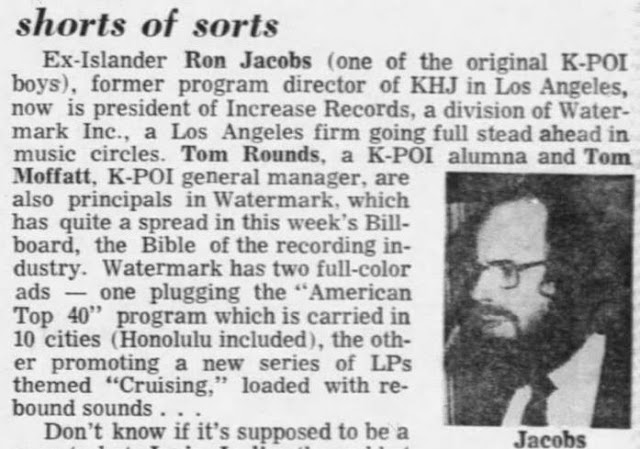 Another early newspaper ad from Albuquerque’s KQEO in October, 1970. 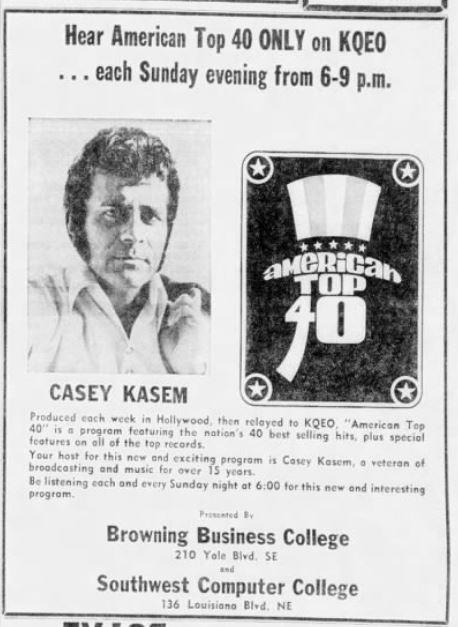 And this very week in Billboard, July 11, 1970, AT40 was being promoted heavily at the Billboard Radio Forum. Tom Rounds mans the booth below: 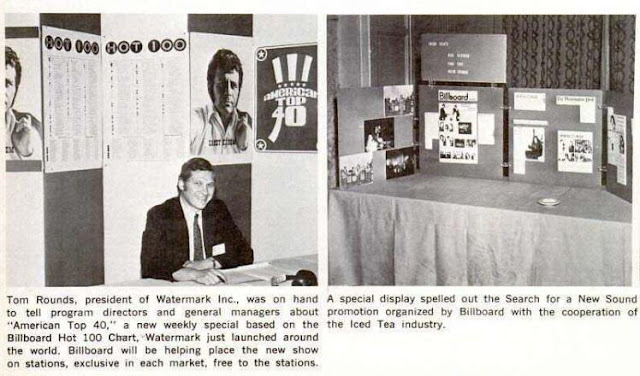 Billboard ran the AT40 story in the issue as FRONT PAGE news: 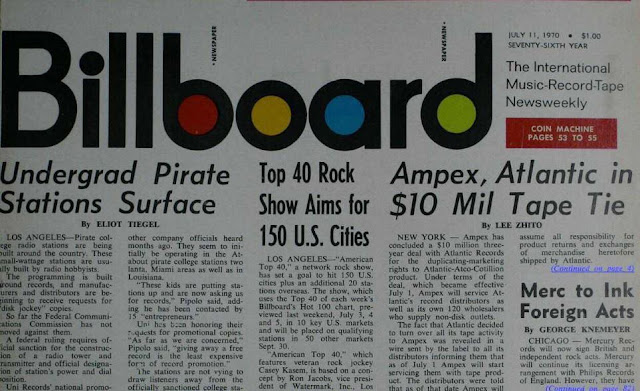 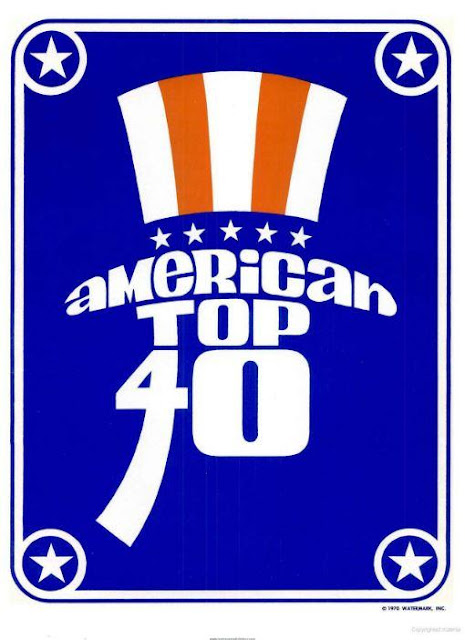 Meanwhile, the Ides get the full page ad, too! 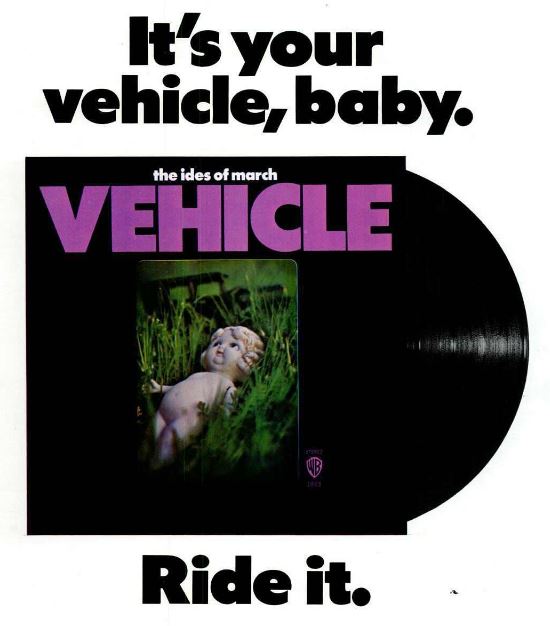 And here's what the AT40 jingle long version is like in stereo as well as the way it sounded off KEYN-FM in early 1971 as recorded off our FM tuner in Dodge City. Back then, tuners would switch to mono when signals got weak, so we often heard it going back and forth between stereo and mono.  You'll hear the way KEYN segued from the cool hour long religious pop show "Powerline," hosted by John Borders, into the AT 40 show at 9 AM Sunday mornings as well as the KEYN outro where they let the jingle run on and then attached the special Casey promo for OUR wonderful Wichita giant.  What a great time, great show and GREAT station this was then.  PLUS, one of their DJs was named "DAVE BIONDI"!!!  Amazing.  I ran across him on a chat board back around 2000.

And here are a couple of nice surveys from friend and FH'er Tony Waitekus. 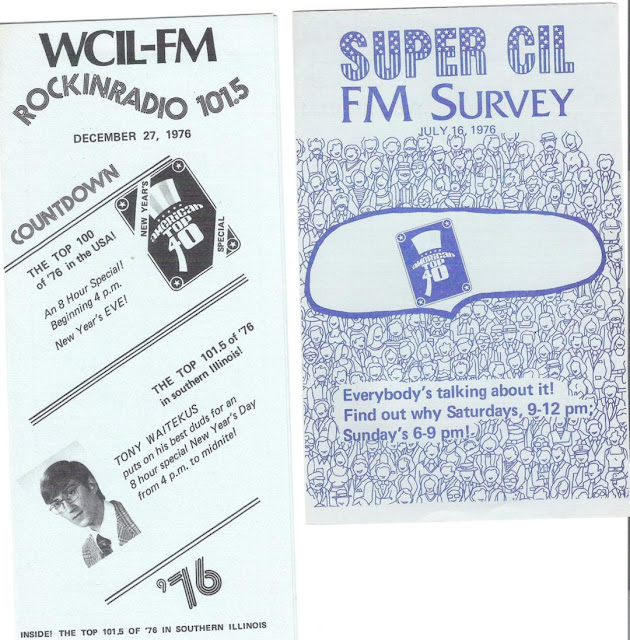 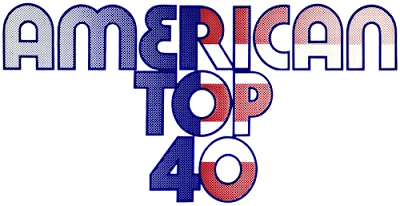