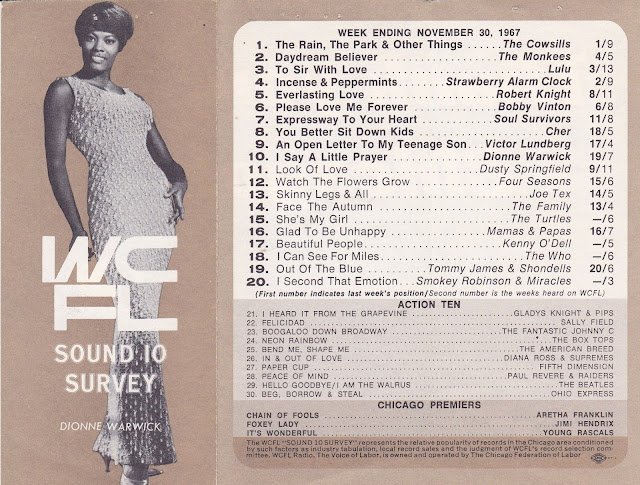 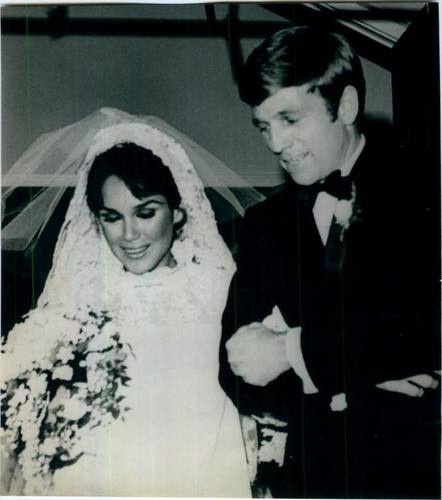 Ed Ames records “Who Will Answer” at RCA’s Hollywood studios

The latest edition of "Rolling Stone Magazine" quotes popular "underground" San Francisco Disc Jockey Tom Donahue as saying "Top Forty Radio, as we know it today and have known it for the last ten years, is dead, and its rotting corpse is stinking up the airwaves."   Meanwhile, here in Chicago, I am still listening to … and loving ... our AM powerhouse radio stations WLS and WCFL!

Rod Carew of The Minnesota Twins wins The Rookie Of The Year Award.    He will remain with The Twins until 1978 at which time he will request a trade due to several policy disagreements with Twins owner Cal Griffith.   (These include racist comments, The Twins' inability to keep young players and Griffith's penny-pinching negotiating style.)  His major league career lasted from 1967 - 1985, during which time he won seven American League batting titles (including 1972 where he never hit a single home run … in fact, he won four batting titles in a row between 1972 and 1975!) and was named to The All-Star Team eighteen times (every season but his last)  In 1969 he stole home SEVEN TIMES, one shy of Ty Cobb's major league record.  He retired as a player in 1985 with a career batting average of .328.  He was inducted into The Baseball Hall Of Fame in 1991 on his very first ballot. 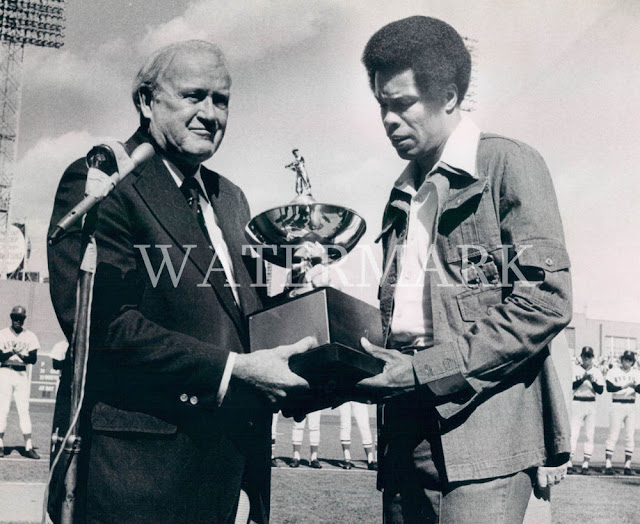 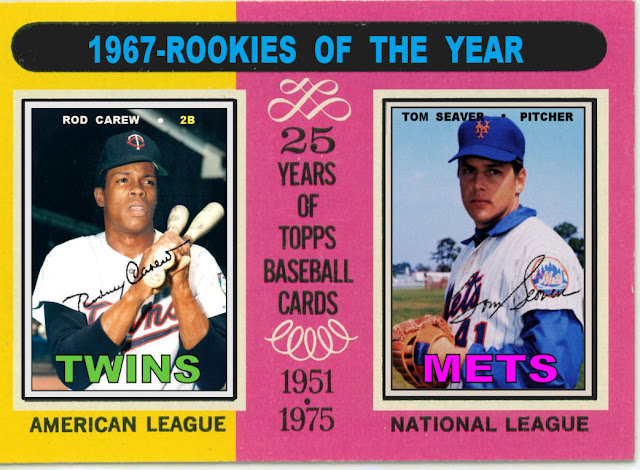 The Monkees complete the filming of their Christmas episode starring Eddie Munster actor Butch Patrick.  At the end they bring out the entire crew to wish them and their families a very happy holiday season.

Otis Redding begins recording what will become his biggest hit, “Dock Of The Bay” at Stax Records in Memphis, Tennessee.  Eighteen days later he will die in a plane crash.  “Dock Of The Bay” will hit the #1 Spot on The Billboard Hot 100 Pop Singles Chart on March 16th of 1968, and remain there for the next four weeks.

The BBC bans "I Am The Walrus".  (Was it because of the secret meaning behind Goo-Goo-GaJoob???)

As Elvis completes filming on "Stay Away, Joe", "Clambake" opens in theaters at #15 on Variety's National Box Office Chart. 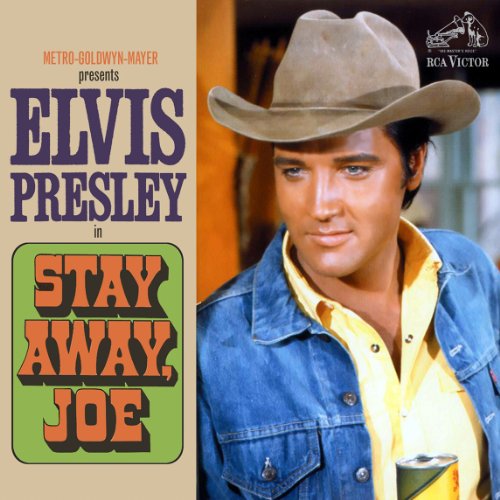 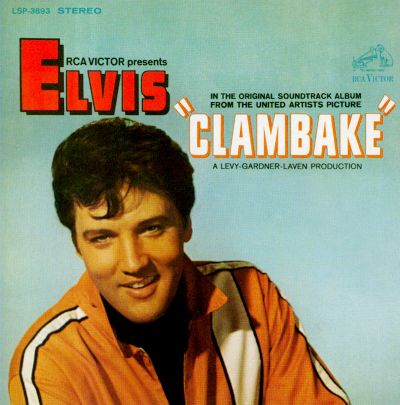 Bobbie Gentry's got the top debut on the chart this week with her follow-up to her #1 smash "Ode To Billie Joe" as "Okolona River Bottom Band" premiers at #64. (She'll never match the success of her first hit.)

In a Battle Of The Bands, The Okolona River Bottom Band would have NO chance against Sgt. Pepper's Lonely Hearts Club Band ... although Bobbie Gentry's first LP DID make it all the way to #1.

Due to the recent British ban on miming, The Beatles' new single is played on "Top Of The Pops" over three year old footage from "A Hard Day's Night".  The Beatles are justifiably furious.

President Lyndon Johnson signs the Air Quality Act, allocating $428 million toward the fight against pollution.
Posted by Kent Kotal at 6:00 AM 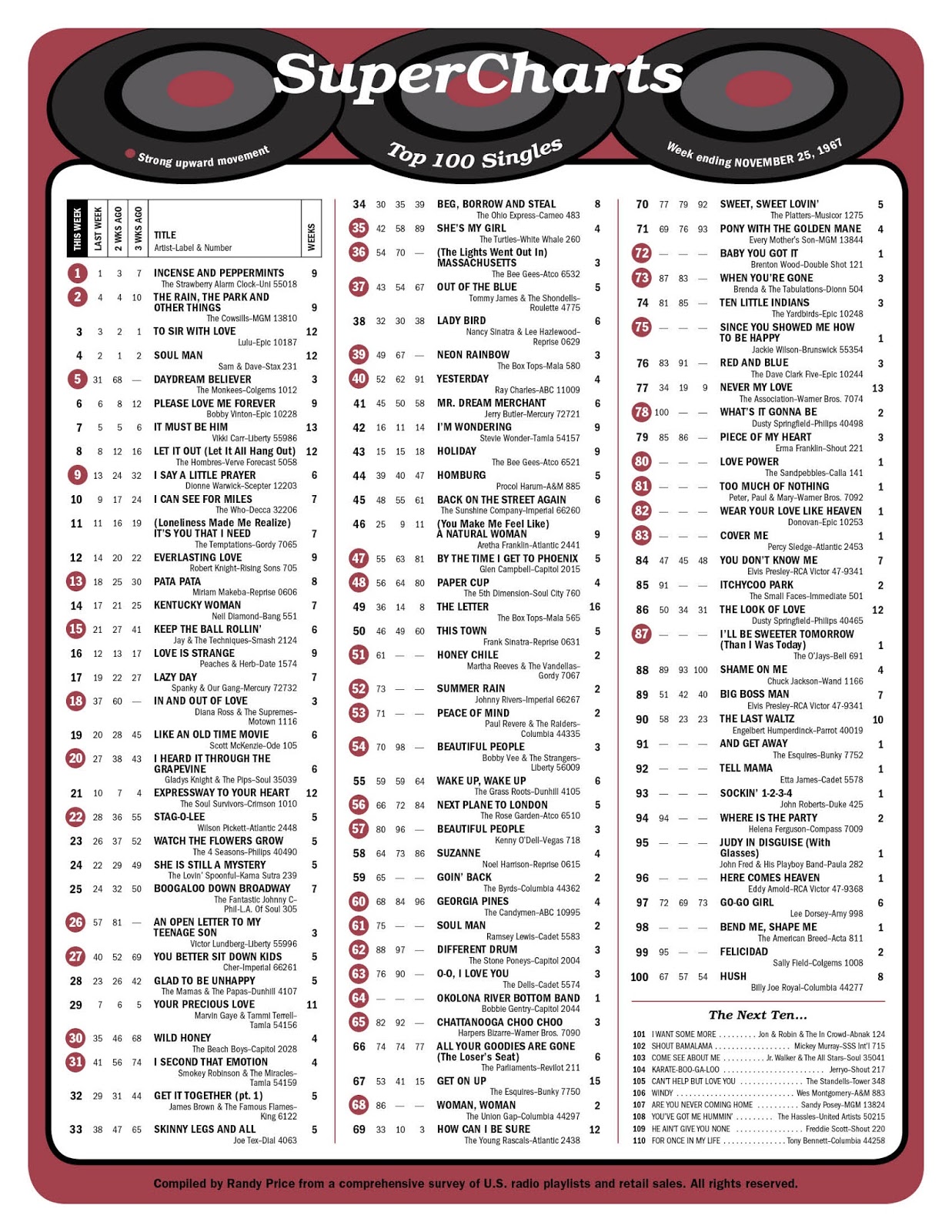 The Strawberry Alarm Clock hold on to the #1 Spot on the Pop Charts this week as "Incense and Peppermints" tops the chart for the second consecutive week.  In hindsight it's the perfect record to wind up the year of psychedelic sights and sounds … The Summer of Love … The Year of Sgt. Pepper … hippies, love-ins, peace, love and make love not war.

Up a couple of notches to #2 is "The Rain, The Park And Other Things" by The Cowsills, which moves from #4 to #2 this week.  "To Sir With Love" by Lulu holds at #3.  The Monkees continue to make major strides with their latest, "Daydream Believer", which moves from #31 to #5 (after debuting at #68 the week before that!)  Also entering The Top Ten for the first time this week is "I Say A Little Prayer" by Dionne Warwick.

The #1 Album in the Country is once again "Diana Ross and the Supremes" Greatest Hits.  "Sgt. Pepper's Lonely Hearts Club Band" stands right behind it in the #2 position, which means that out of the 23 weeks this Beatles album has spent on the chart, six weeks have been spent at #2 and fifteen weeks were spent at #1.

Arlo Guthrie's landmark album "Alice's Restaurant" is released.  It has become a staple of Thanksgiving broadcasting for the past fifty years.  Arlo first premiered the eighteen minute song at The Newport Folk Festival earlier that year … and two years later would star in a (pretty horrible) movie adaptation. 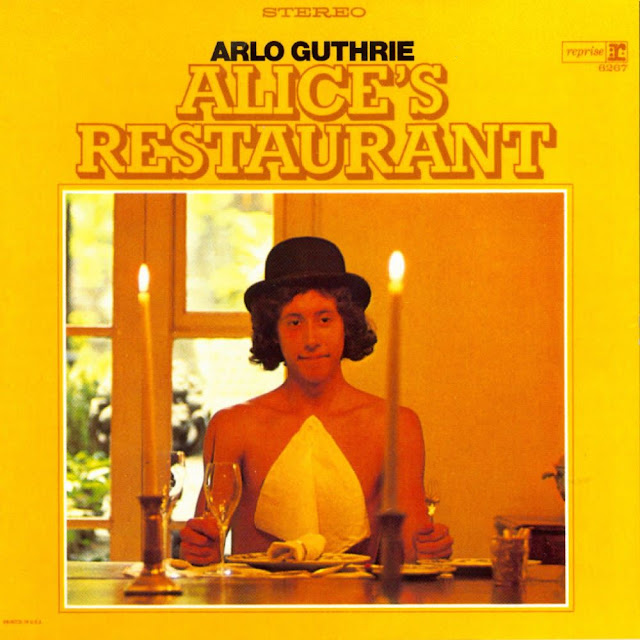 (This is a "MUST PLAY" every year on Thanksgiving!!!) 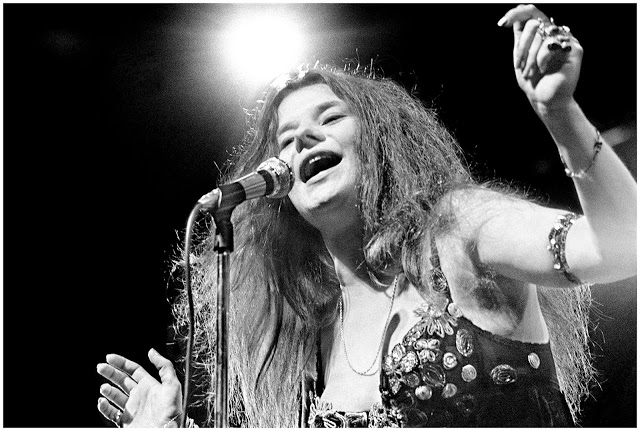 In hindsight (although I will admit to also being confused by it at the time), I never really understood how Cher got away with her gender-bending performance of "You Better Sit Down Kids".

First of all, it was pretty line-toeing subject matter to tackle in song at the time ... this was, after all, a song about a couple getting divorced ... but it was clearly written from the Dad's point of view.  (Sonny Bono wrote the tune ... but evidently felt his wife Cher could do a far better job of singing it than he could ... which is probably true ... but as such, the lyrics as written really don't make any sense!)  And honestly, I think it may have been even more heartfelt had Sonny tackled the vocal instead.

From start to finish, the storyline is ass-backwards ... yet we loved it enough to propel it all the way to the #8 spot on The National Charts.

After being the Poster Couple for the Beat Hippie Movement of the '60's, Sonny and Cher reinvented themselves in the '70's as a Vegas show act ... Sonny cut his hair, hung up his bear-skin vest and wore a tuxedo while Cher constantly raised eyebrows in her breath-taking Bob Mackie dresses.  This new persona earned them their own highly-rated television series ... and Cher's career was rejuvenated along the way with three more #1 Hits between 1971 and 1973.

The couple divorced for real in 1975.  (Incredibly, they tried to keep the show going despite the well-publicized end of their marriage!)  Each ultimately hosted their own variety show but it just wasn't the same.

Sonny died in 1998 in a skiing accident ... and Cher has had quite a bit of acting success (including a couple of Oscar nominations, with a win for her role in "Moonstruck") as well as done about thirty "farewell tours" over the past few decades.
Posted by Kent Kotal at 6:00 AM 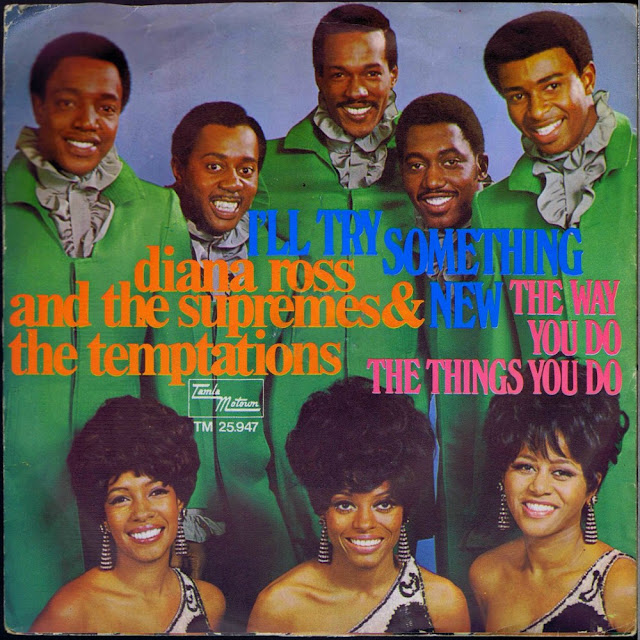 An hour later, Paul Revere and the Raiders appear on The Smothers Brothers Comedy Hour where they perform their new single "Peace Of Mind".


Things haven't cooled down at all for Disney's "The Jungle Book".  Last week's box office receipts were just under $3.7 million … and this week … in its FIFTH week of release, box office sales only fall off to $3.6 million!  In fact, to date, the film has taken in about right around $20 million over the past five weeks. 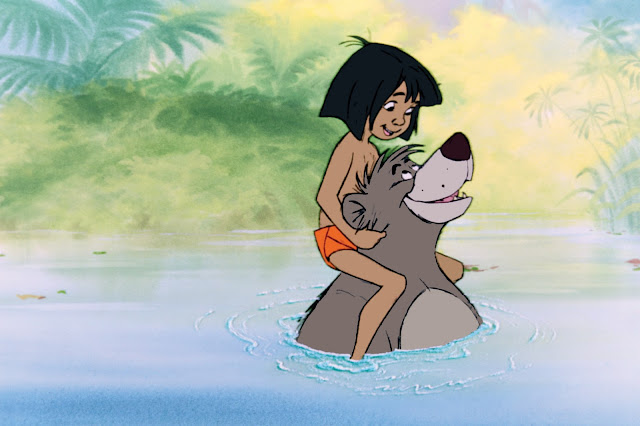 In Viet Nam, The Tiger Force, an elite US Army Unit of the 101st Airborne Division, achieved their 327th kill.  US Army Lt. Col. Gerald Morse had called for the 327 kills to match the name of the 327th infantry regiment.
Posted by Kent Kotal at 6:00 AM