Surprisingly, 1968 did not offer the amount of timeless classics that we saw in our Salute to 1967 last year ...

But there are still a few good titles on this list worth checking out ...

Wow, talk about your television domination ...

"Laugh-In" would also win the Emmy for Outstanding Musical or Variety Series for the 1968 television season.  Best Comedy went to "Get Smart" ... Best Drama to "NET Playhouse," neither of which placed in The Top 20.

Our chart was compiled based on a combination of ALL this chart information, in order to determine the most complete and accurate rank order.

Thanks to artists like The Beatles (and their "Sgt. Pepper's Lonely Hearts Club Band" album) and others who followed suit by recognizing that an LP could be more than just a couple of hit singles surrounded by a bunch of filler, the album became the most viable way for an artist to project exactly what they were all about during 1967.

In fact, the concept of "concept" was first approached that same year by The Moody Blues, whose "Days Of Future Passed" may very well be the very first rock concept album (although as a general consensus, most historians cite “Pepper” with this distinction, simply because of the continuity of the first two and last two tracks ... and, quite honestly, because THEY said it was a concept album!)

Fortunately, other artists like Jefferson Airplane and Jimi Hendrix and The Beach Boys and several others embraced the format and the LP now became a very viable outlet to push the envelope a bit farther.  As a direct result, underground radio was born … and the FM radio band was utlized to the full extent of its power.

As such, 1968 produced some pretty heavy candidates when it came down to calculating The Top 20 LPs of 1968 …

But that's exactly what we've done here, based on extensive research of Billboard's Album Chart (and a few other key sources)

So may I present to you … 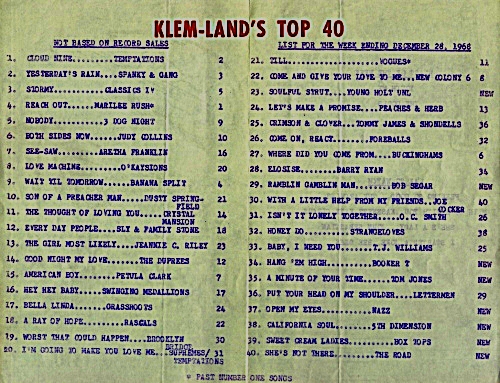 We return to the small town Midwest for a town of under 10,000, famous for being the home of famed "Blue Bunny Ice Cream."  Chicago was being represented well here with #2 Spanky & Our Gang's great "Yesterday's Rain" being quite a surprise position.
The Archies (Ron Dante) and the Banana Splits share the Saturday morning cartoon band hit parade this time.  Three Dog Night begin their career slowly, but in the Midwest are #5 already with their first 45 release.

While WLS DJ Larry Lujack was changing plans for the newest New Colony 6 45, the "rocking" side, "Come And Give Your Love To Me,"** was already at #22 in Iowa as well as the Buckinghams' classic "Where Did You Come From," which, if issued a year earlier, would have been top 10 nationally.  The fickle public had turned their backs on the group by late 1968, just as they had on producer James Guercio and song writers Beisber / Holvay.

One more classic song I cannot go without mentioning is by the Nazz.  This Philadelphia band would include future star Todd Rundgren.  You may have noticed "Hello It's Me" charting in previous weeks here in FH by the group, but now on KLEM, the true A side, "Open My Eyes" makes it to the chart.  To me, this opitimizes great psych pop music of 1968.  How THIS never was a hit in 68 and the "B" side was a minor hit in three different years for the Nazz as well as top 10 as a Todd solo 45 later, is beyond me.  Both are really great, tho.

**By the way, the NC6 45 was a two-sided hit a on the other side of Iowa in Dubuque that very week!

THAT WAS THE WEEK THAT WAS:
12/26/68:  Led Zeppelin kick off their first North American Tour in Denver this evening as the opening act for Vanilla Fudge.  The MC5 were also on the bill.

12/30/68 – Peter Tork officially quits The Monkees, buying his way out of his contract for $160,000 and leaving him broke.  He will rejoin the band in 1986 after MTV begins airing old episodes of their television series … and has performed with them again on nearly every reunion tour ever since. 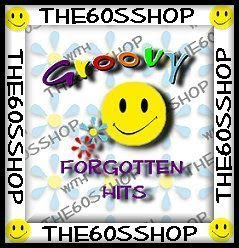 I'd like to thank Clark Besch, without whom NONE of this would have been possible.  He's the guy who tracked down all these weekly radio station surveys so that we could share them with our readers ... and also provided rare insight into some of the more obscure, regional hit titles featured throughout the course of the past year.  (If you missed any of these, they're all still available ... just search by Saturday dates and find the city where YOU grew up listening to all the hits on the radio!)

Thanks also to all the faithful fans who visited this page each and every Saturday ... it truly is appreciated.

The Top 40 Surveys of yesteryear seem to be a popular item here in Forgotten Hits so we will be looking for ways to feature them on an on-going basis in the future, too.

Don't miss a day of Forgotten Hits postings ... make us part of your daily routine by bookmarking this page and stopping by every morning as you start your day.  There is ALWAYS something going on in Forgotten Hits ... and even if it's not a brand new posting, there are ten years of archives to explore.  (Just type the topic you are interested in into the search feature at the top of the page ... you'll be amazed by what you'll find here!)

Thanks again to everyone for your continued support as we begin Year 20 of Forgotten Hits.  Happiest Holiday Wishes to all of you!
kk
Kent Kotal
Forgotten Hits