Muddy Feet On The Mississippi

Helping Out Our Readers:

Seems like every time somebody discovers this great, lost New Colony Six track, we get an email asking about it!!!

But that's ok ... we just LOVE introducing new people to music they may have missed along the way ... and this is a good one!

This particular track eluded ALL of us ... as it wasn't officially released until 2007, when it first appeared on the "Sides" CD, spotlighting rare tracks by The New Colony Six and The Raymond John Michael Band.  (Prior to that, it had been locked in the vaults, unreleased, for DECADES!!!)

One cannot help but wonder how a track this good was never allowed the chance to see the light of day ...

But we're sharing it with you again today ... along with some commentary from some of the key players involved in the recording.

It all started with this email ...

From Cape Town …
An inflamed interest in the New Colony Six's “Muddy Feet (On the Mississippi)” ...
The guitar solo's compelling, riveting and soaring a mite above their other repertoire.
Who was the guitarist?  The song is astounding … and I assume Billy Herman wrote it???  Greg Nashan???
Shiloh Noone
Rolling Stone Writer & Radio Presenter
(And a good friend of The Flock's Fred Glickstein, who has disappeared off the map???)

The New Colony Six track is an IMMEDIATE attention grabber … how on earth did THIS one end up in the vault for all these years?!?!  It’s really unlike anything else the guys ever recorded … and it smokes from start to finish.  This is one of those woulda / coulda / shoulda been a hit tracks, had it only been given the chance to do so.  (Of course, by then, the band had already been typecast as a ballads band … and, quite honestly, also by then, even those were running a bit thin … but SOMEBODY should have noticed the potential of this one!)

As you suspected, it was written by Drummer Billy Herman … and that’s Ronnie Rice on the lead vocal (which surprised the heck out of me when we talked about it several years ago after I first discovered the track.)

My first guess for the guitar work was Skip Griparis, simply because it sounds so completely different than anything else the band ever recorded … but he wouldn’t join The New Colony Six until a couple of years later … so that would mean that Gerry Van Kollenburg, the ONLY member of The New Colony Six to be with them for their entire duration, must have spiced things up for this recording.  (And since the usually reclusive Gerry helped contribute to the liner notes for this CD, I’m thinking he likely knew about the track, remembered it and was quite proud of his guitar work!)  However, a bit of investigative work shines some new light on this amazing track ... keep reading to see how it was Gerry's decision to have Skip Griparis handle the lead on this one.

As for Fred Glickstein, I shot him an email and let him know that I had heard from you … who knows, you may hear from him again sooner than you think!  (kk)

Because this time around, I decided to do a bit of research and see how much more we could learn about the track.

I read elsewhere that Skip Griparis played ALL of the guitars on this track, making me think that it must have been recorded later than originally thought.  (Of course, the same source for that information also credits The Bee Gees as being the songwriters of this track … which is TOTALLY false … They wrote the song “Let There Be Love,” which also appears on the "Signs" CD and was the first single released by The Raymond John Michael Band, an off-shoot of The New Colony Six, founded by Ray Graffia, Jr., Chic James and Craig Kemp.)

As you can imagine, everyone’s memory regarding a track that was all but forgotten at the time, is a bit sketchy at best some fifty years later … but we reached out to Ray Graffia, Jr. (who was no longer in the band by this point), Ronnie Rice … who definitely sang the lead vocal on this cut, Gerry Van Kollenburg, again the only “constant” throughout The New Colony Six’s original run, Bruce Gordon, the acknowledged bass player on the track, Chuck Jobes, The NC6’s keyboard player at the time and Skip Griparis to see if, between all these sources, we could piece together the puzzle any further.  Surely SOMEBODY must remember SOMETHING!!!

Hey Kent,
I did sing lead on Muddy Feet …
Always liked the tune, but what can you say?
Stay well.
Ronnie Rice

Kent,
As you know, by the time it came out, I was off doing the RJM Band and teaching English at St. Genevieve Middle School … or it might have even been when I first began dabbling in pollution prevention and wastewater treatment, so I never heard or even knew of its existence until Sides came out and I got a copy.
Be blessed, be safe, be healthy,
Ray

Hello Kent!
Here's what I remember …
I believe the tune was written by Billy Herman (RIP - no details)
Lead vocal was Ronnie Rice. I sang the harmony on the hook.
Chuck Jobes on keys, Skip Griparis on guitar, Billy on drums, and me playing bass.  It was recorded at CBS on McClurg Court. I don't know if the recording studio is still there.
Like the tune People And Me, which was also a great rocker,  it just didn't score. The Colony was known for our love ballads.
Thanks for asking.
Yours truly,
Bruce Gordon

When I saw Skip Griparis performing here in Nashville, the main thing I remember him telling me is that he still owns and plays the Gibson ES-335 that he played on the Muddy Feet on the Mississippi track. We also discussed the "Southern" imagery in the lyrics since none of the guys were from that part of the USA, or had any connection to the area. The last time I talked with Bob Wilson, he told me he and Skip talked or emailed quite often.
David Lewis
Two latter day New Colony Six members for sure!!!  By then, the band was no longer in the spotlight here in Chicago … completely off the radar … but there’s plenty of proof showing that these guys were still churning out great music during this era, even if it was to a more limited audience.  While Skip took over for Ronnie Rice as lead vocalist, those two have remained friends for all these years, too, and will often pop up at each other’s shows.  Ironically, both had shows coming up at The Metropolis Theater here in Arlington Heights that were cancelled / postponed due to the pandemic.  (I reached out to Skip for some additional commentary on this track but didn’t hear back in time for today's post.)  kk

Perhaps the most definitive answer (and this is the one that I'M going with!!!) comes from Gerry Van Kollenburg, who tells us ...

Hi Kent:
As far as I remember:
This was recorded in 1972 or 1973 at Universal Studios
It was written by Billy Herman and Skip Griparis
The lineup was as follows:
Ronnie Rice - lead vocal
Billy Herman and Skip Griparis - background vocals
Gerry Van Kollenburg - rhythm guitar
Skip Griparis - lead guitar  (It was his song and I liked the way he played lead on it, so I asked him to play on the session, though he wasn’t a member of the band at that time.)
Bruce Gordon - bass
Chuck Jobes - keyboards
Thanks … and thank you for all of your support.

That’s awesome - thanks Gerry!
Stay safe during all this on-going craziness.
Music has been a GREAT escape for all of us -
Thank you for giving us so much to enjoy and share.
kk

THAT’S A WRAP (a-tap)!
So there you have it ... more insight into a GREAT, forgotten track that is winning over brand new fans every time somebody hears it!  (And, speaking of "wraps," I still say they oughta make a deal to license "Roll On" out to advertisers able to fill orders for the dwindling supply and swirling demand for toilet paper!!!)

Hey, don't laugh ... as we recently learned in FH, a similar promotional idea scored the band a #4 Hit Record in Hawaii in 1971 ... and earned them a trip to the islands to perform a series of concerts there!  (kk)


Some previous New Colony Six pieces you may wish to check out:
https://forgottenhits60s.blogspot.com/2008/04/new-colony-six-reunion-and-we-were.html 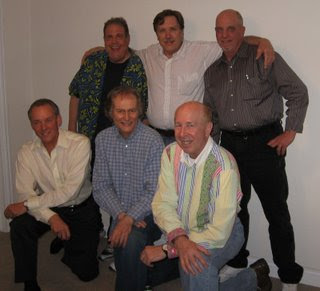 
You'll also find much more information on the latter-day members of the band … who played and sang on what (whether they were members of the group or not!) … and how some of these songs got into their hands.  (There's some good stuff here!)  kk
https://forgottenhits60s.blogspot.com/2010/01/helping-out-our-readers-new-colony-six.html


The New Colony Six, circa 1969, appearing on The Mike Douglas Show where they performed their latest hit singles, "Things I'd Like To Say" and "Can't You See Me Cry." 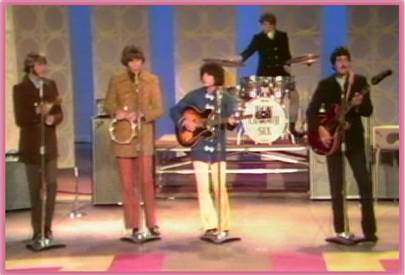 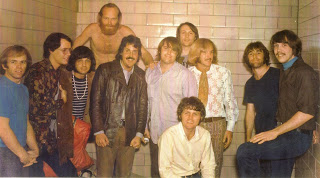 And Ronnie and Ray today, performing as part of the IMMENSELY popular Cornerstones Of Rock shows ... 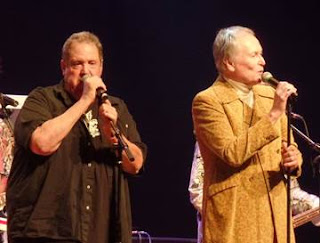 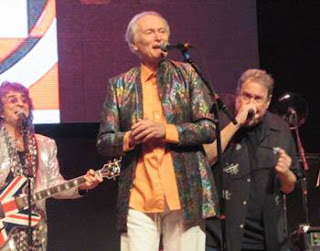