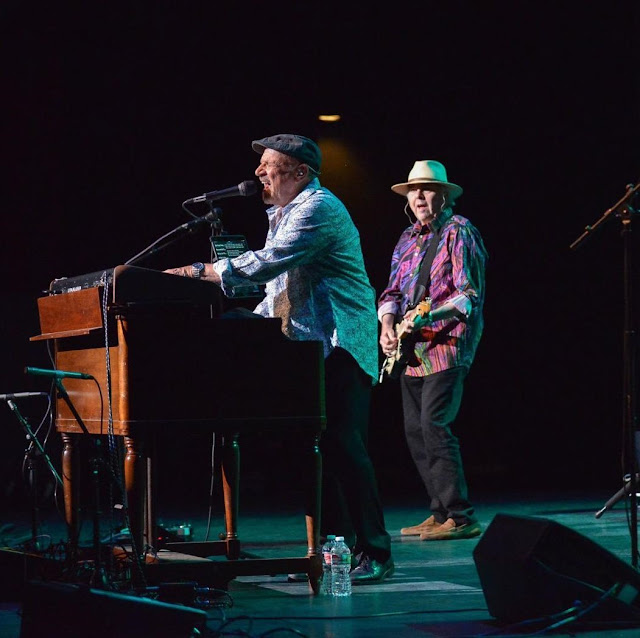 Gene Cornish, a founding member of The Rascals, collapsed on stage following the first song he performed with Rascals cofounder, Felix Cavaliere, at The Alberta Bair Theater in Billings, Montana.

The theater was quickly cleared and the concert was cancelled ... but not before an audience member gave him CPR before the paramedics arrived.

While details have been sketchy in press follow-up stories, FH Reader Danny Guilfoyle, who actually spoke with Gene, tells us:

The thing that hurts him the most is his chest from when a woman from the audience gave him CPR. The doctor at the hospital in Billings told him that she probably saved his life and they are trying to find out who she is so they can thank her.
He is going to have a pacemaker put in and the doctor feels that this will do the job.
Did you know that the concert was canceled — they were on the first song when he went down?
Thank God that he’s OK and feeling good.
Danny
PS — They are supposed to be in Cleveland tomorrow night – at this point I don’t know if they’ll get a sub or not.

Boy, I hope he doesn't come back THAT quickly!!!  Here’s hoping for a full and speedy recovery. (kk)

This news prompted me to check in our on FH Buddy Tommy Roe, who underwent heart surgery a couple of months ago.  Last we heard, he was making a remarkable recovery (it’s AMAZING what they can do these days in this regard!) but here’s the word from his own mouth (well, hands actually, since he most likely typed me this email!!!  Lol)

Hi Kent ...
Still on the mend, but I am up and about and doing very well. A few more weeks for the sternum to heal properly and I should be good to go. Will start cardiac rehab on 9/24 for a few weeks.
Again, I want to thank you and all the Forgotten Hits fans for reaching out and sharing your good wishes and prayers for me and my family. Very much appreciated indeed.
Your Pal,
Tommy

Do the full rehab, Tommy … you’ll be glad that you did.  SO happy to hear that you’re doing well and on the mend.  Best to you from ALL our Forgotten Hits Readers.  (kk)

And, with word that Sam the Sham is also doing better, this has turned into “Good News Week” in Forgotten Hits!

Macca’s new “Egypt Station” CD hit the streets on Friday (September 7th) and Paul has been all over the place promoting it.  (In fact, I can’t remember this kind of heavy saturation for a new McCartney product in YEARS!!!  Watch this album come in at #1 next week!!!)

And now he’s done a couple of different interviews (as well as a play-by-play narration explaining the story behind each and every track on the new CD on The Beatles Channel … as well as a major Sirius XM Interview with Howard Stern, an appearance on Jimmy Fallon’s show and a live (via YouTube) concert performance held at Grand Central Station in New York prior to kicking off his upcoming world tour.  (He’ll also be the featured performer at this year’s Austin Music Fest!)

It was the Howard Stern appearance that blew me away … check out this clip (if you haven’t already seen it) in which McCartney discusses, in the most candid way I’ve ever heard him do so, the break-up of The Beatles.

History has made McCartney look like the bad guy in all of this … and to a degree, he was … but this particular clip is particularly enlightening and insightful … and there is no getting past the emotional effect it had reviewing the events one more time.  In my opinion, one of the best … and most real … Paul McCartney interview clips I’ve ever seen.


(I’ve also got to hand it to Howard Stern, who kept the tone EXACTLY the way it should have been handled … instead of his usual over the top efforts to drag things thru the gutter … kudos for a job well done!)

And then he prank phone-called Jimmy’s old childhood phone number and left a voicemail … performed his new single “Come On To Me” (which I have to admit sounded pretty good … in fact, after repeated listens, the CD IS starting to grow on me.)

You can catch the complete YouTube concert here …
https://www.youtube.com/watch?v=1QGxFpSb6Sc

And, since we gave all this space to Paul McCartney, the LEAST we can do is tell you about the new John Lennon stamp …

kk …
A brand new John Lennon Forever Stamp has just been issued by the post office ---
I'm sticking with my Elvis Stamp.
FB 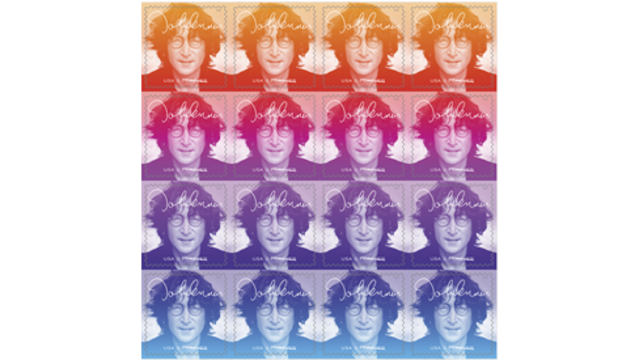 I thought at one point in time you had to be born in the USA to qualify for a postage stamp … although I guess John DID eventually become a US citizen.  Still, pretty cool!  (kk)

If you’d like your chance to win a pair of tickets to see either Jim Messina or Canned Heat at Chicago’s City Winery … or a copy of Davie Allan’s brand new “Retrophonic 5” CD, you need to shoot me an email NOW … 'cause we’ll be picking the winners next week.

Just let us know which give-away you’re interested in and we’ll throw your name in the hat!  (kk)

After three blunders ("download only" albums), I'm back with a new CD.
Tracks 1 - 9 are brand new tunes from this year plus two cover tunes, an alternate take of an insane “jam” previously unreleased and two previously unreleased “home demos”.
Davie
Snippets here:
♫ Retrophonic 5 - Davie Allan and the Arrows. Listen @cdbaby

And, speaking of upcoming shows …

Here's a significant tour announcement.   The MC5 are going back out on the road for a 50th anniversary tour.  I don't know how he will pull this off as there are only two of them left. There is a Chicago date posted.
Robert Campbell
https://mc50th.com/
Hey, Danny Hutton still tours as Three Dog Night … and there’s only one of him!!!  (And he hardly sang ANY of the leads!!!  The MC5 had a definite cult following … I’ll betcha people turn out for this one.  (kk)

By the way, The City Winery just booked Randy Bachman (by himself … meaning no Guess Who reunion yet with Burton Cummings as previously tipped here … still waiting for more details on THAT one!!!)
Randy (who puts on a great show, by the way) will be there for two shows on January 24th and January 25th … tickets go on sale next Thursday (September 13th) to the general public.  VinoFile Club Members can buy them two days sooner.  (kk) 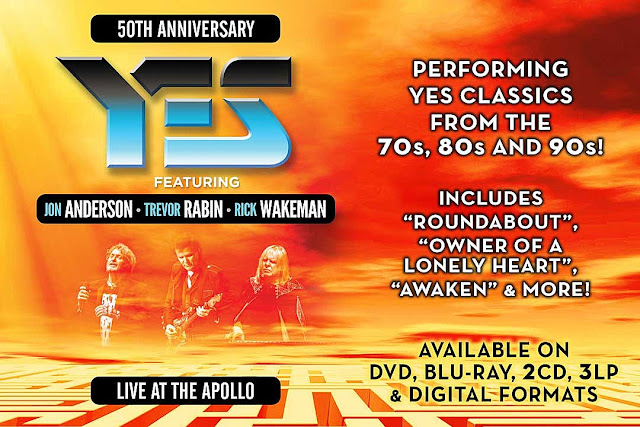 In 2016, Jon Anderson, Trevor Rabin and Rick Wakeman combined their incredible talents and the heritage of Yes to take to the road for a series of concerts celebrating the band’s musical legacy from the seventies to the nineties. Yes, featuring Jon Anderson, Trevor Rabin, Rick Wakeman brought their live show to the UK in early 2017, including this sell-out performance, captured live at the Manchester Apollo.
With a setlist embracing the spectrum of their 50-year career, including classics “Roundabout,” “Owner Of A Lonely Heart,” “And You And I,” “Hold On,” “Heart Of The Sunrise,” “Rhythm Of Love,” “I’ve Seen All Good People,” “Awaken” and many more, the band were on superb form. Wakeman’s keyboard sorcery wove its spell alongside Rabin’s masterly guitar skills and founding member Jon Anderson’s unique vocal and lyrical prowess to create a special night of musical alchemy for their fans. This glorious show captures the true, enduring nature of this ever-powerful band.
This stunning show is available on Blu-ray, DVD, 2CD or a limited edition triple LP, pressed on 180-gram orange vinyl!
Check out the trailer here.
Click here to order!
Brought to you in partnership with Eagle Rock Entertainment.

What an interesting cover of "Dark End Of The Street" featured on this week's chart from WKLO.
The Rose Garden's lead guitarist John Noreen (the blond guy in the pics and videos) still plays with a local oldies cover band and told me he hasn't seen or heard from Diana DeRose in nearly 50 years. The Rose Garden's cover of "She Belongs To Me" is well worth a listen if anyone skimmed past it. Excellent choice, Kent.
David Lewis
I have always loved the Rick Nelson version of “She Belongs To Me” … but had management and the record label released Rose Garden’s version as a single in 1967, Rick’s may have never come to be.  (And they’re really not all that dissimilar.)
My guess is the label never even considered it because their focus was on building the band around their female lead singer … and this one is sung by Jim Groshong.  (Too bad they never considered that showcasing the versatility of all the band members might have increased their shelf life.)  Listen to the background vocals and harmonies and you’ll see what I mean about the Peter, Paul and Mary similarities.  (Scroll back to Thursday in case you missed it.)
I’d be interested in seeing John Noreen’s band when we come to Nashville in December if they play a wide variety of oldies.  John was the only member who stayed in music after the group disbanded in 1970.  Noreen taught himself the pedal steel guitar and became a successful studio musician in Nashville, eventually joining singer John Davidson’s band on tour and then country hitmakers Highway 101.  I’m sure he’s got all kinds of interesting stories to tell!  (kk)

>>>And I especially like how "The Weight" is shown by both Jackie DeShannon and "Big Pink" ... which is the name of the album it came from, not the artist!  (Of course, it was released by The Band!!!  Ooops!)  This one's for you, honey ... Take A Load Off, Frannie!  (kk)
Kent,
Actually, if you bought the original 45 in 1968, the listing is correct.  There is NO mention of the Band at all on the 45.  Quite confusing to most all including me, at the time.
Clark Besch 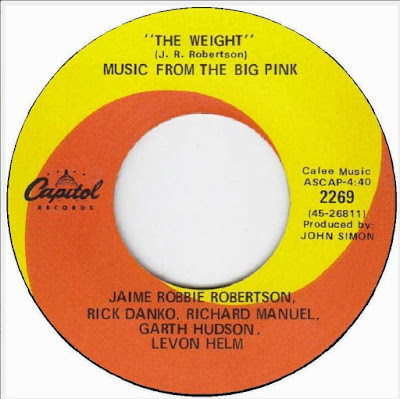 Wow!  I had NO idea!!!  Not only do they show the artist as "Music From The Big Pink" but then they proceed to list each of the Band members by name.  (Hmm ... maybe they just thought these were the guys who made up the band without ever realizing that the NAME of the band WAS The Band!!!  (Could I have made that any more confusing?!?!?)
See, even I learn something new in Forgotten Hits every time I read it!!!  What a great publication!  Lol) kk

And, if you don’t believe me, check out the email below …

Hello kk!
I keep abreast of the scene by your commitment to the musical world. Thanks for your enduring labour of caring contributions at forgotten hits, as you are needed and you bring to light a venue that caters to us true connoisseurs of musicianship. You showcase artists that otherwise would not have been updated to us. Thank you again for your passion and dedication. You care and it is duly noted.
Davie Allan And The Arrows " Retrophonic 5" is such an intoxication of guitar prowess.  I was flabbergasted at "Topsy," which he has done before, but it just pounds!
He ought to get something moving with this offering. He is like fine aged wine then fortified with corn squeezins. And "Missing Link" has to be headphoned enjoyed. A boilermaker of guitar assault but with finesse.
(Except for "Missing Link" which is a far out trip all into its self inflicted presentation of cycledelic wah wah frenzied activity.)
Vibeman
Posted by Kent Kotal at 12:01 AM