Besides his mention in a key scene in the new Bradley Cooper / Lady GaGa remake of “A Star Is Born,” Orbison is currently out “on tour” (in Hologram fashion), hitting The Genesee Theatre next Sunday Night (October 21st) … and a second teaming with The Royal Philharmonic Orchestra is already in the works, this one featuring contributions from members of his own family.

Bob Merlis keeps us up to date with a couple of recent press releases …
https://variety.com/2018/music/news/roy-orbison-tribute-a-star-is-born-1202971833/
https://www.pollstar.com/article/roy-orbison-a-hologram-star-is-born-136474

Orbison passed away back in 1988 … thirty years ago … just before the release of the second Traveling Wilburys album … but his music will live on long past all of our lifetimes thanks to marketing ploys like these.

We saw “A Star Is Born” Sunday afternoon … and I’m hoping to attend the Hologram Show next weekend as well.  (I’ve just GOT to see it … my curiosity is piqued although, I will admit, in somewhat of a creepy way … but I’ve got to see it for myself in order to determine if a program like this will really work before a live audience.  With the proposed ABBA Hologram Tour slated for next year, I need to know NOW if I need to get in line for tickets!!!)  kk

HI KENT,
JAY SIEGEL IS MY GOOD FRIEND AND SO IS HIS WIFE JUDY.
ONE OF THE GREAT SINGERS OF THIS MUSIC.
PLUS HIS TONE IS AMAZING!  IN FACT, HE SETS A DIFFERENT TONE.
JEANETTE AND I JUST LOVE THE TWO OF THEM.
THANKS!
FREDDY BOOM BOOM CANNON
Please let Jay know about our website … I’ve been trying to contact him for years as I think he would really enjoy it!
I finally got the chance to meet him after your show at The Arcada, but things were so hectic at that point we barely got a chance to talk.  I would just LOVE for him to share some of his incredible memories with our readers from time to time.
Thanks, Freddy!  (kk)
I WILL!
FREDDY

Regarding the Tommy Roe / Tommy Row typo in the CHUM Chart you ran on Sunday …
At that time, the CHUM chart was compiled by the Program Director (Allan Slaight), Music Director (Bob McAdorey) and the music librarian.  The information was then sent to the printer who mocked up a proof and sent it back to the station for approval.
Now, since Tommy Roe's name is spelled correctly as the # 7 song, I can only assume (as I didn't start at CHUM until a year and a half later), that this was missed at several levels.  Shit happens.
Doug Thompson (CHUM Archives)
Hey, we’ve seen it on virtually every chart we’ve ever reprinted … it just seemed to be a very low priority on everybody’s list when it came to “spell check” … song titles and artists’ names were regularly misspelled or misrepresented altogether.  (You’d just think that as the featured artist of the week, a little bit more attention would have been paid in this regard!!!)  kk

Speaking of the charts …

I loved the remembrance of Jose Feliciano's "Star Spangled Banner" in this week’s Saturday Survey feature.
At the time, it did not seem that big a deal to a 12 year old loving baseball.  However, it WAS the model (IMO) for what came and I don't like the way most change the song styling.
Hey, 50 years ago, here's the American Bandstand Top 10 board!  #2 and 3 are great surprises!
https://www.youtube.com/watch?v=lXXvGiEhEv8
Clark Besch

Hi Kent,
Well Buddy, I had about a pot and a half reading through this Sunday’s blog ... you must of had at least that much creating it! ... lol
Once again, well done, mi Amigo.
Have a great week, my friend.
Bless ya -
Barry Winslow

I have to comment on the "B sides" thing, as that is one of my TRUE PASSIONS in music.
I have so many 45s where I like the "flip side" more.  Most of these flip sides were not hits, but some were.
You mentioned "Something” / “Come Together" and "Laughing” / “Undun," so I will not discuss those.
A few random thoughts beyond that, and believe me, I could go on and on and on about this subject.
While a few producers / record companies (Phil Spector being the prime example) put 'trash' on the B side to force attention to the "hit" side, I believe most singers and bands really wanted 'quality' on both side of the single.  The Beatles, Elvis, Ricky Nelson, the Beach Boys, the Stones, the 4 Seasons, Gene Pitney and Roy Orbison rarely had anything but quality on both sides of the record - at least to my ears.  And even Spector broke his own pattern once in a while.  "Hung On You," the flip side of "Unchained Melody," is every bit as quality at the 'hit side.'
1961 had two 45's where both sides were TOP 10 hits nationally, and all four songs are among my favorites by their artist, for the year, and even beyond that.
First, Rick Nelson released "Travelin' Man” / “Hello, Mary Lou" on the same 45.
Then Elvis released "Little Sister” / “(Marie's The Name) His Latest Flame" together.
All fpir songs were TOP 10, and peaked at numbers 1, 9, 5 and 4, respectively.
One of the oddest, to me, B side quirks had the same hit song. "I Say A Little Prayer" was a hit for Dionne Warwick and Aretha Franklin.  Dionne took it to # 4 in 1967; Aretha to # 10 in 1968.  But the flip side of Dionne's version was "(Theme From) Valley Of The Dolls", which had fouor consecutive weeks at # 2 in early 1968.  The flip side of Aretha's version was "The House That Jack Built," which reached # 6.
There are so many other flip sides that I could talk about, but I will stop myself at three for today.
Nancy Sinatra had a big hit with "Sugar Town" in late 1966.  The flip side, "Summer Wine," one of her duets with Lee Hazelwood, actually made the BILLBOARD TOP 50 several months later.
Guess Who's smash "These Eyes", had a hidden gem on its flip side.  "Lightfoot" was an homage to fellow Canadian singer, Gordon Lightfoot.
Finally, since you had an article on the Tokens in today's blog, flip over their 1966 hit, "I Hear Trumpets Blow," and you'll find a hidden gem in "Don't Cry, Sing Along With The Music."
Brad
Comments on a couple that you mentioned …
“Hung On You” is another perfect example of what I was talking about … THIS was the intended A-Side by Phil Spector … so this is the track that HE produced.  The B-Side, considered then just “another version of ‘Unchained Melody,” was so unimportant to Spector that he let Bill Medley produce it, as he had done on the majority of The Righteous Brothers’ other B-Sides up to this point.
Again, disc jockeys jumped on the remake … and The Righteous Brothers’ version of “Unchained Melody” has become one of the most played records in history … right up there with their own smash “You’ve Lost That Lovin’ Feeling.”
‘Summer Wine” is, as you know, one of my all-time favorites.  It placed at #3 on our Readers’ Poll of Favorite, Forgotten B-Sides several years ago … and was actually in the running to be #1 on that list until some last minute voting.
And “Theme from ‘Valley Of The Dolls’” is another example of a good amount of time passing between its first issuance and its hit status.
“Theme from ‘Valley Of The Dolls’” was first released as the B-Side of Dionne Warwick’s “I Say A Little Prayer” in October of 1967.  Then, three months later disc jockeys flipped the record over and started playing “Theme from ‘Valley Of The Dolls’” when the movie became a hit in theaters … and it actually ended up outshining the A-Side, peaking at #2 to “Prayer”’s #4 showing in Billboard.  (It actually hit #1 here in Chicago.)
Similarly, Lulu’s “To Sir, With Love,” the #1 Record of 1967 according to many Year-End Charts, was originally the intended B-Side of Lulu’s rocker “The Boat That I Row,” a Neil Diamond tune that became a hit nearly everywhere but here in The States, where it “Bubbled Under” at #115.
I, too, am fascinated by B-Sides … that’s why we devoted an entire series to it.  (When all was said and done, over 65,000 votes came in to determine your Top 200 Favorites!!!)
Hopefully, one of the enterprising stations on our list will reconsider their decision and give this program some airtime … because I am absolutely CONVINCED that this is a Hot Topic Special that your listeners will love.  (Call me!!!)  kk

And here’s an interesting story from David Salidor, a long-time member of The Forgotten Hits list …

It seems that David Salidor’s father did PR for Todd’s first album RUNT (Ampex), released in 1970.  David told me, “I heard that album and just loved it; his follow up, SOMETHING / ANYTHING (1972 / Bearsville) was an instant rock classic. About time for him to go into the R&R HOF.”  Salidor continues, “I saw him in 2011 with the New Cars (Kasim was in the group, too) and he was fantastic. They actually did ‘Black Maria’ from SOMETHING / ANYTHING and it tore the house down. This was at a WPLJ / China Club event organized by Tom Cuddy. Amazing show!  "Todd's a totally unique genius ... although at times, a bit of overindulgence does show. As a producer and engineer, he's great, too. For a true testament to his talent, watch his appearance on Daryl's House ... amazing! For the record, my favorite Todd-production is the WAR BABIES album by Hall & Oates, released in 1974. All these years later, still a bold record ... totally brilliant." 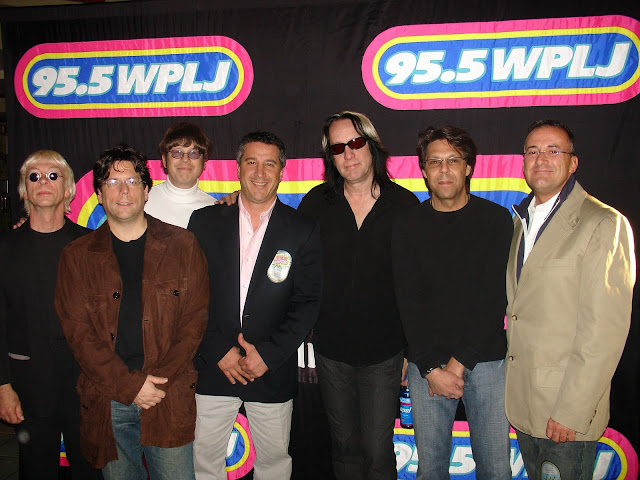 Todd deserves Rock And Roll Hall Of Fame Induction, not only as an artist but also as a producer.  He also helped totally reinvent Grand Funk Railroad, giving them the biggest hits of their career … and was instrumental in the Badfinger “Straight Up” album as well … one of my Top Ten Favorite Albums of All-Time.  He has been on our Deserving And Denied List for over a decade now … it’s time he finally gets his due.  (At press time, he was officially in 4th place with just under 75,000 votes … hopefully The Rock Hall will see their way to finally recognize this great artist.)  kk

Here's some info on a new Chuck Berry documentary:
https://variety.com/2018/tv/news/chuck-berry-feature-documentary-gets-international-launch-1202979454/
Ken Voss
When we saw “A Star Is Born” this weekend we saw previews for both the new Freddie Mercury / Queen movie (which looks amazing, by the way) as well as a new Elton John biopic called “Rocket Man” (which I really haven’t heard anything at all about!)
This is one way this music will stay alive and new generations will continue to discover it … and nothing could please me more.  (Consider, too, “Mamma Mia … Here We Go Again and all the recent award-winning portrayals of Ray Charles, James Brown and Johnny Cash … not to mention older fare like “The Buddy Holly Story” and “La Bamba” … ALL positive steps, in my opinion, as a means to introduce new generations to the music we all love and grew up with.  (kk)
Posted by Kent Kotal at 6:08 AM