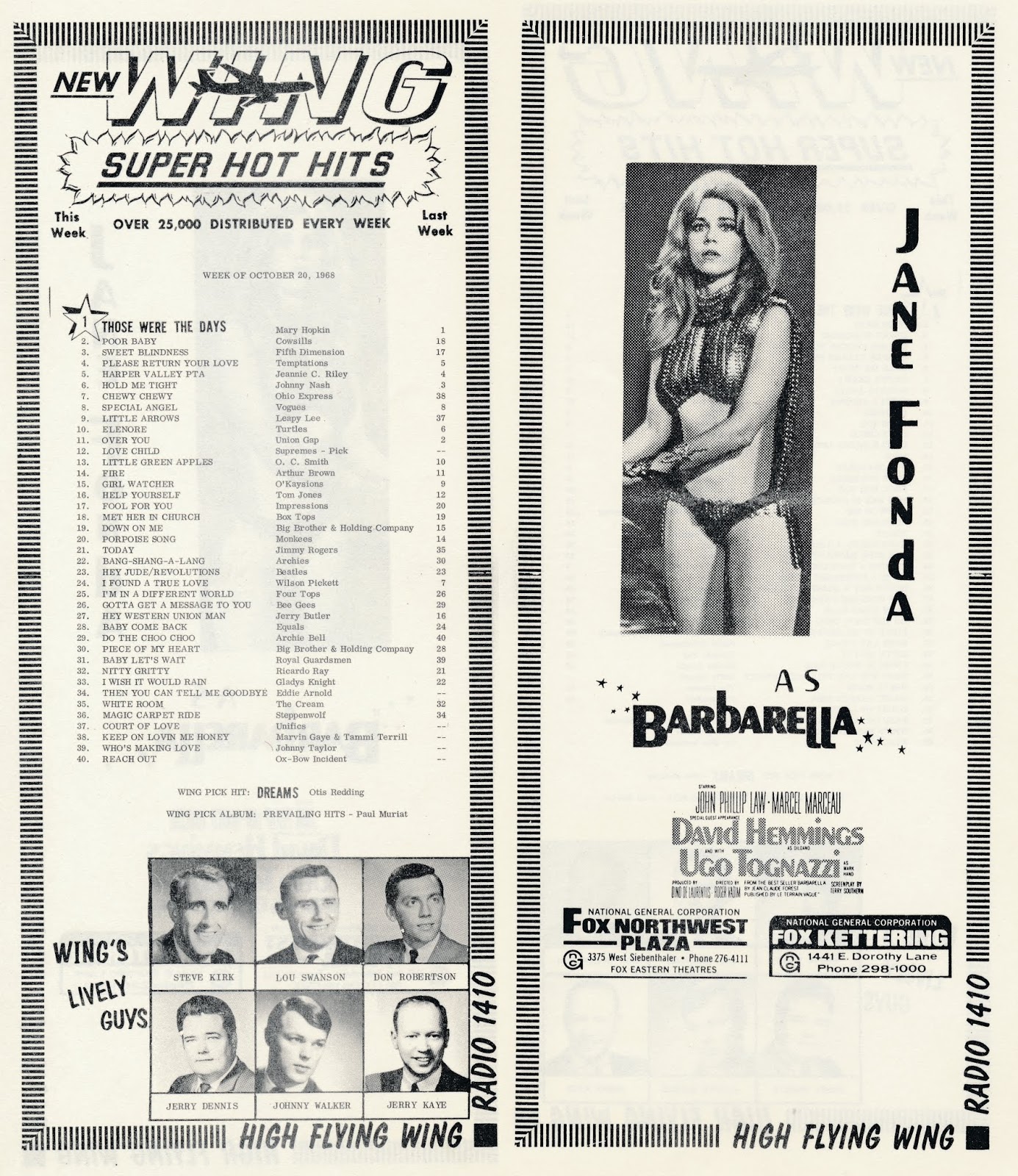 I wonder how many 13 year old boys slept with a copy of this week's survey under their pillow back in 1968!?!?!  (In fact, I cannot help but wonder how many record stores refused to display it on their counters!!!  That being said, I'll bet circulation went up over the usual 25,000 copies per week after this chart hit the streets!)

"Sweet Blindness" at #3 is another big mover this week, up from #17 the week before.  In fact, there are several records taking HUGE leaps up the chart this week ... "Chewy Chewy" by The Ohio Express jumps from #38 to #7, "Little Arrows" by Leapy Lee climbs from #37 to #9, Jimmie Rodgers (spelled wrong on the chart) is up fourteen places from #35 to #21 with "Today," a song that only managed to "bubble under" in Billboard and Archie Bell and the Drells move up eleven places with "Do The Choo Choo" (#40 to #29).

Diana Ross and the Supremes have the highest debut of the week as "Love Child" premiers at #12 ... but both of WING's Pick Hits never made much of an impression down the road.  (kk)


Despite being the 4th largest city in the state, Dayton had a great top 40 station in WING.  Future WLS legendary DJ Jerry Kaye was a personality this week 50 years ago there, too.

On the chart, the great Cowsills obscurity,"Poor Baby," is sittin' pretty at #2, while the relatively unknown (today) Temptations hit "Please Return Your Love To Me" sits at #4.  The Ox-Bow Incident got their first break three years earlier by landing a gig in the Murray the K Brooklyn Fox NYC shows and here make the Dayton charts with their cover of the 4 Tops' "Reach Out" at #40.  A nice "girl next door" photo on the back, too. 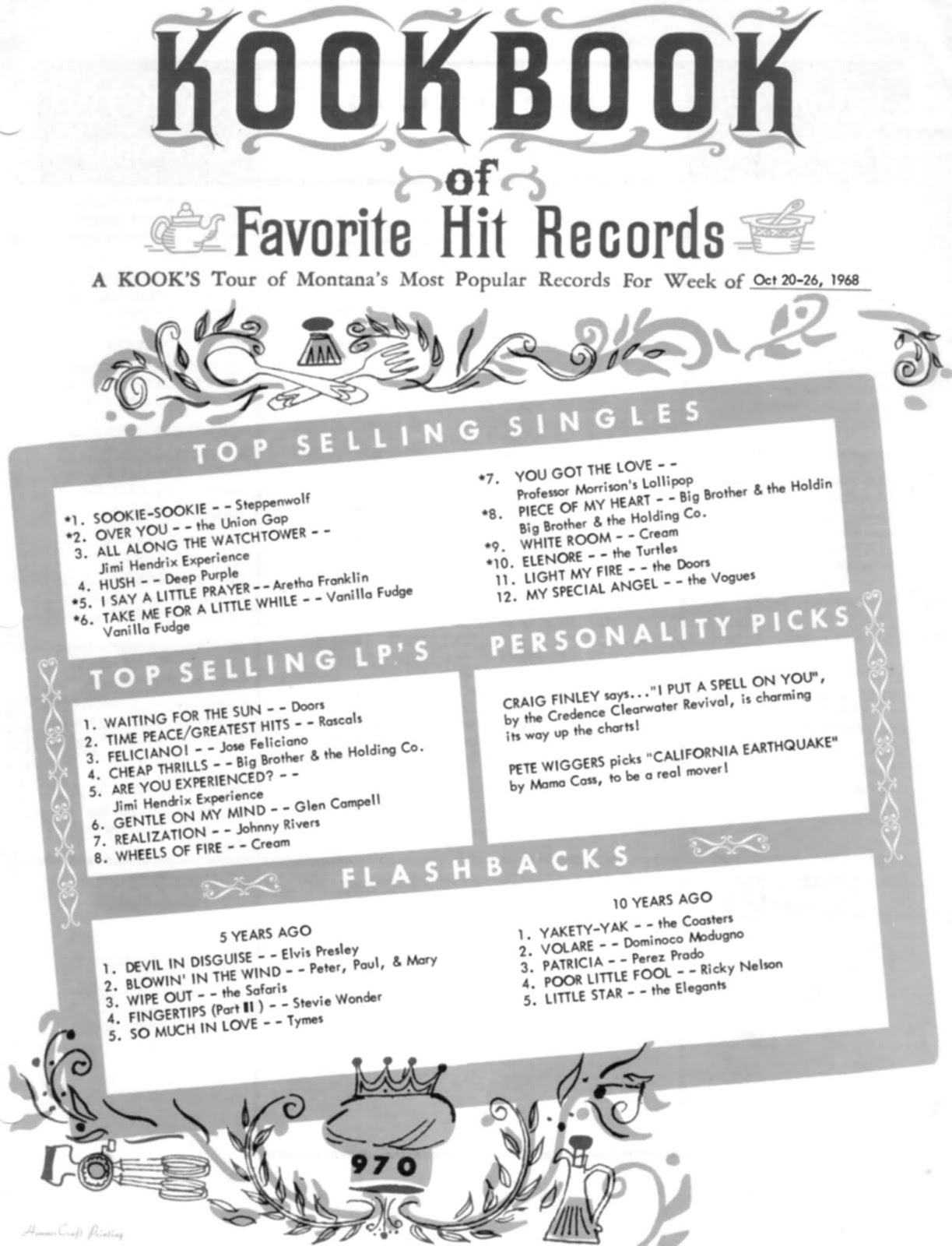 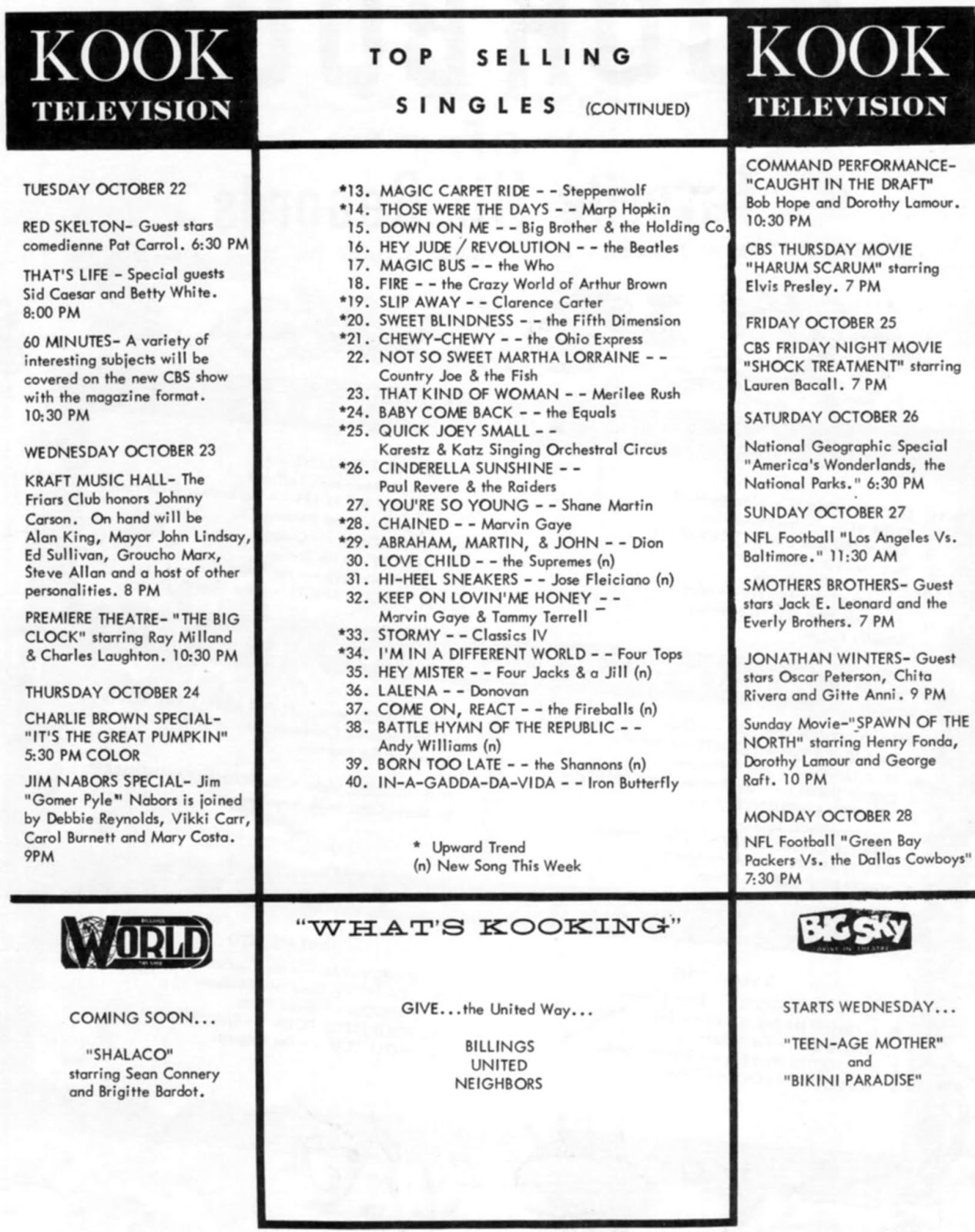 If you need any more convincing that things have changed to a much heavier sound, you need look no further than this week's KOOK Chart out of Billings, Montana.

Steppenwolf has the #1 Single with their B-SIDE, "Sookie Sookie" ... the A-Side flip sits at #13!  (I can't pass up the opportunity to feature this one ... long a Forgotten Hits favorite.  In fact, in our Readers' Poll of Favorite, Forgotten B-Sides a few years ago, "Sookie Sookie" came in at #17, so it's gotta be one of YOUR favorites, too!


The rest of The Top Ten features tracks by The Jimi Hendrix Experience, Deep Purple, Vanilla Fudge, The Doors, Cream, Big Brother and the Holding Company, The Crazy World of Arthur Brown and somebody called Professor Morrison's Lollipop!

The LP's Chart features some "heavy" hitters, too, with Cream, The Doors, Big Brother and the Holding Company and Jimi Hendrix all represented.

Steppenwolf, The Who, Big Brother, Iron Butterfly and Country Joe and the Fish all have Top 40 Hits this week in the lower half of the chart.

But this is, after all, the '60's ... so playing right alongside all these underground hits, you find bubblegum music (The Ohio Express and the Kasentz-Katz Singing Orchestral Circus), Mary Hopkin, The Fifth Dimension, Dion and Andy Williams!!!

This is MY kind of chart ... check out the TV listings on the side columns, as well as the movies currently playing or coming to the area.  They even show The Top Five Hits from five and ten years ago!  (Boy, how things have changed ...  In 1963 Elvis ruled the roost ... and five years before that, you'd find The Coasters at the top of the charts!)

This is a GREAT survey ... would love to see more from this station as their roots appear to go back to the earliest Top 40 Charts ... and they just kept changing with the times.  (kk)

Also on this date, Diana Ross and the Supremes appear on a Bing Crosby television special

Also on this date:
Jay and the Americans record “This Magic Moment”