Fred Winston fans (and I happen to be a huge one!) can hear this radio icon this evening when he guests on Fred Lange’s “All Over The Planet” radio program from 6:30 – 8:30 pm (eastern time) on Radio Harbor Country, WRHZ 93.5-FM and WRHC 106.7-FM, broadcast out of Three Oaks, Michigan.

Fred (who lives on a farm in Michigan and has been an occasional Forgotten Hits contributor over the years) says that he’ll be telling stories about some of the famous recording artists he met while working at WLS 890-AM here in Chicago.  (Winston first signed on with the station in 1971 … incredibly 47 years ago!!!)

Winston told columnist Robert Feder, “I haven’t been on the air in any shape or form for awhile, so I’m really looking forward to dusting off the cobwebs and firing up the bilge pump.”

You can listen live here:  radioharborcountry.org

Greetings Again Kent,
Just heard from Bruce Belland.  After 64 Years, (Yes, That's Not A Typo!) THE FOUR PREPS are calling it quits.
The date of their final appearances will December 5, 2018.
Thought you'd like to know.
Keep up with the great work here on the blog.
Take Care -
John Eckert
Wow!  64 years!!!  Amazing!
The Four Preps enjoyed their first real chart success in 1958 with the #2 Hit “26 Miles.”  They followed that up with a #3 record, “Big Man,” but never hit The Top Ten again.
They were often lumped into the Folk Rock boom of the early ‘60’s but really predated that era by a few years, as did The Kingston Trio, who became sort of the Poster Children of that genre.
The Four Preps also had some fun with their contemporaries, recording novelty hits like the “More Money For You And Me” medley (#14, 1961) and “A Letter To The Beatles.” (#76, 1964)  In all, they enjoyed six Top 40 National Hits.  We wish Bruce the very best in his “retirement” (although I’m sure he’d be the first to agree that he’s been living and enjoying the best life possible, making all this wonderful music and bringing joy to so many fans over the years.)  kk

>>> My main memories were of Dusty Rhodes on WLW Cincinnati doing his long shows on Sunday nights at Christmas.  We would attempt to drive my mom around looking at the lights of the city while Dusty set the mood.  (Clark Besch)
Rhodes, who may or may not have retired from the county government job he got elected to multiple times, is still chugging along with weekly oldies shows on listener-supported FM stations in his local area in Ohio, and, unless we hear otherwise, is presumably working on his 36-hour marathon (12 noon Christmas Eve Day to midnight Christmas Night) of holiday cheer heard on a mess of stations and IHeart.
Bob Frable

Hi Kent:
I wanted to share a Christmas novelty tune I wrote that seems to be catching on! I wrote is a tribute to Joey Dee and the Starlighters and he is thrilled! It is called "Santa Does the Peppermint Twist (Down Candy Cane Lane)" and is about Santa dancing to that classic along with his elves! Just thought you might enjoy sharing it as a Christmas novelty dance tune!
https://www.youtube.com/watch?v=vd4YEo0tQEI

Here is what Joey had to say about it!

Anyway, I would be honored to have you share it with the group and I thank you for all that you do to promote those long forgotten favorites!
Best,
Bill
P.S. If you know of any radio stations who may be interested in airing it, I will gladly send along an MP3!
Let's put it out there and see if we get any deejay response.  Thanks, Bill!  (And GREAT to hear from Joey Dee!!!)  kk

And then this from Joey Dee ...

>>>Peter & Gordon had a release in 1968, "You've Had Better Times," that we played a lot at AFKN in Korea.  It was a bit edgy, but had a good sound, though quite outside their normal presentation.  Don't know how it did stateside.  (Carl Mann)
Kent,
I do remember the record by Peter & Gordon with the tune YOU'VE HAD BETTER TIMES. Locally here in OKC, it made it's initial survey appearance for the week of August 1, 1968. It was on the survey for seven weeks, peaking at #20. Hadn't heard it in a very long time and had to get it out to remember what it sounded like.
Larry Neal
I vaguely remember the tune, too … but not well enough to hum a single note … so I had to do the very same thing!  (kk)

It really doesn’t sound anything at all like them, does it???  (By the way, Gordon Waller wrote this one!)  kk

Saw this on posted on TheMACWire.com ...

ROCKERS DELIGHT — The sight of Pete Townshend, alone on stage, with an acoustic guitar performing, was as strong an image as I’ve ever seen. A sight to behold. To me, that was and is what rock ‘n roll is all about. Definitely one of the highlights of the year.
Last night was Rockers On Broadway 25th anniversary
Rockers was an idea that creator Donnie Kehr came up with, with Townshend, when Kehr was on Broadway with The Who’s Tommy. They’ve had everybody from Debbie Gibson to Micky Dolenz and Peter Tork, to Gene Cornish and Cousin Bruce Morrow involved. I think the first one I attended was at the late, great B. B. King’s, where they saluted the music of Motown. Motown-wizard Berry Gordy attended and I remember at one point being backstage, surrounded by Dolenz, Gibson, Will Lee and Gordy himself. True magic. Last night, at NYC’s Le Poisson Rouge, Free / Bad Company drummer Simon Kirke, along with actor Michael Cerveris were the honorees. Kirke gave one of the most eloquent speeches I’ve heard in far too long and even announced that the Democrats have taken Arizona! He is a supporter of several programs promoting the arts in school for kids and spoke passionately of the need for it. He played drums for a riveting version of “Shooting Star” and Free’s “All Right Now.”
I’d never seen him play live – and, sing - but he was tremendous; not losing a beat. I see him often at Steve Walter’s The Cutting Room; he lives in NYC and is a terrific gentleman.


The performances were especially good this year, opening with a terrific medley of songs by The Jackson 5 from the kids from School of Rock. J. Robert Spencer followed with a great take on “Woodstock” and then “River Deep, Mountain High” from Eric Michael Krop.
Rocktopia’s Tony Vincent followed with a great take on Bowie’s “Suffragette City.”
Max Sangerman and Tommy Burnett (Modern English) followed with English’s classic “I Melt With You.” Constantine Maroulis, just a terrific vocalist and performer, followed with Gun N’ Roses’ “Welcome To The Jungle.” And that was followed by a terrific performance of “Because The Night” from Alice Ripley.
Then, Kehr came on and introduced a video from Cerveris, who could not attend due to filming (Netflix’s Mindhunter), and Pete Townshend came on to accept the award. He told a funny story about Cerveris’ audition for Tommy and how dreadful it was. He said that he took Cerveris to every pub and club possible to get him into the role and that at the late, great China Club, he finally succumbed.


Townshend then performed “Drowned” (from The Who’s sixth album Quadrophenia; 1973) and “Let My Love Open The Door” and was simply marvelous. For the record, Townshend was completely approachable and in exquisite form. I was backstage for a time and could not take my eyes off him, sitting on the couch going over the music. A piece of rock-history for sure.
Then the cast of the play The Who’s Tommy (also celebrating their 25th anniversary) came onstage and performed a terrific medley from the show – Townshend stood off stage smiling. I’m moved to say that the material from Tommy (originally released in 1969) sounded as fresh and as relevant as ever! 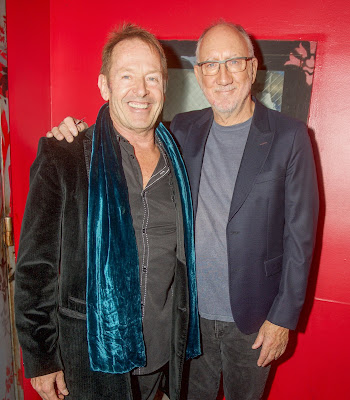 Also seen at the event were Maureen Van Zandt; Dina Regine; Rockers-PR-man David Salidor, who handled the media for the event; May Pang; photographers Bobby Bank and Jeff Smith.
The band, assembled by Kehr, was as vibrant as ever. Sensational.
Said Kehr:, “It was a historic night for Rockers; terrific in every way.” Absolutely, one of the best ever.
by G. H. HARDING

FH Reader Bob Merlis reminds us that the brand new Roy Orbison CD with The Royal Philharmonic Orchestra comes out today.  This is the SECOND volume in this series to feature Roy's music.  (Bob sent me a copy last week but I've yet to have the chance to listen ... the new 6-CD White Album has been occupying all of my disc time the past several days!!!)

So, we'll let HIM tell you more about it right here ...

Just a quick reminder that the second collaboration between Roy Orbison and The Royal Philharmonic Orchestra, Unchained Melodies, is officially out today from Roy’s Boys and Legacy Recordings.
Here’s a link to a video for “Heartbreak Radio,” one of the album’s 15 tracks.
https://www.youtube.com/watch?v=qy5tRAod3BQ
The song originally came out in 1992 on Roy’s King of Hearts album. As you’ll see in the video, this new version includes the participation of all of his surviving sons -- Wesley, Roy Jr. and Alex —  their wives, Roy’s grandkids (and RPO).  Also of note is the fact that Rick Vito (former Fleetwood Mac) plays slide on this version.  He was asked to do the same on the original but he had to beg off since he wasn’t in town at the time Roy asked him — a major regret of his for years — so that circle is now complete.  The baby with the tambourine is Bo Orbison (Roy Jr and Åsa's younger son) and the toddler on Alex's lap behind the drums is Roy III, Bo’s older brother. The female voice you hear is that of country star Cam, by the way.
In the attached screen shot you will see “The Orbison Women” who are, left to right: Åsa Orbison (Roy Jr's wife), Jen Hicks (Wesley's fiancee), Emily Orbison (Wesley's daughter and Roy’s only grandchild until the recent arrivals of Bo and Roy III)  and Erika Orbison (Alex's wife, then pregnant with their daughter Eden) 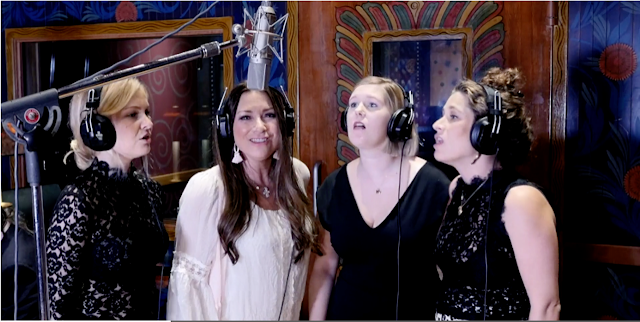 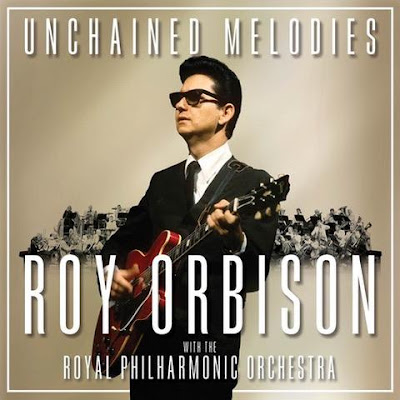 
Harvey Kubernik talks more about the definitive 50th Anniversary Elvis Presley Comeback Special box we told you about the other day here ...
http://cavehollywood.com/elvis-presley-68-nbc-tv-comeback-special-celebrated-with-definitive-50th-anniversary-box/

Let's not forget this coming Saturday is a special one:
Singer/songwriter/ minstrel Gordon Lightfoot turns 80 ... that day.
Tal Hartsfeld
87.7 / Me-TV-FM will be saluting the music of Ol' Gordo throughout the day.  (Head honco Neal Sabin is a big fan.)  Hmm ... I wonder if I could get them to play Burton Cummings' incredible tribute to this Canadian troubadour???

And we should also pay a quick tribute to Roy Clark, who passed away yesterday at the age of 85.
Clark had a lengthy career in country music ... but we all got to know him when he teamed up with another country legend, Buck Owens, and came into our living rooms every week on the hit television series "Hee Haw."
His biggest pop hit came in 1969 while that series was on the air ... "Yesterday When I Was Young" climbed to #16 on the Record World Chart that year.  (It peaked at #19 in both Billboard and Cash Box.)  kk


Limited postings the next ten days ... so please check back when you can.

Wishing you all a very Happy Thanksgiving!
kk
Posted by Kent Kotal at 6:00 AM