With 50 states and 52 weeks in a year, we had two weeks of "play" time which we gave to Washington, D.C. last week and, with all our FH Canadian friends, we give Canada this week's 1968 tribute survey.

Instead of featuring an Eastern city, we go to Calgary, a city of over one million people today!

CKXL was more than a station PLAYING the hits ... it was attempting to CREATE the hits!

At #1 this week in 1968 were the "CKXL Happy Feeling" with their giant local hit, "Happy Feeling."  What was this all about?  Earlier in the month, Billboard magazine explained how CKXL was deciding to designate certain local groups as "CKXL bands" that the station would help to promote!  These bands were winners of the CKXL Battle of the Bands contests and winners were promoted by the station.  Promotion is one thing, but to #1????  They started this band battle thing 18 months earlier when there "were no Calgary bands but the Irish Rovers."  As of the article, CKXL claimed 100 bands working in the city and a dozen groups recording.

You will find several OTHER Canadian artists on this chart, but I particularly like a song that was top 10 the week previously in the American Everly Brothers song "Milk Train."  The Everlies had some tremendous songs in the mid and late 60's that failed in the US charts, but made it in other countries.  They were passé in the US but this hit on CKXL was almost like a new "Sugar Shack" song, IMO.  I love it.  They had a #2 song in the UK in '65 with the incredible "Price of Love," which was almost stolen completely for Shocking Blue's "Mighty Joe" a few years later. 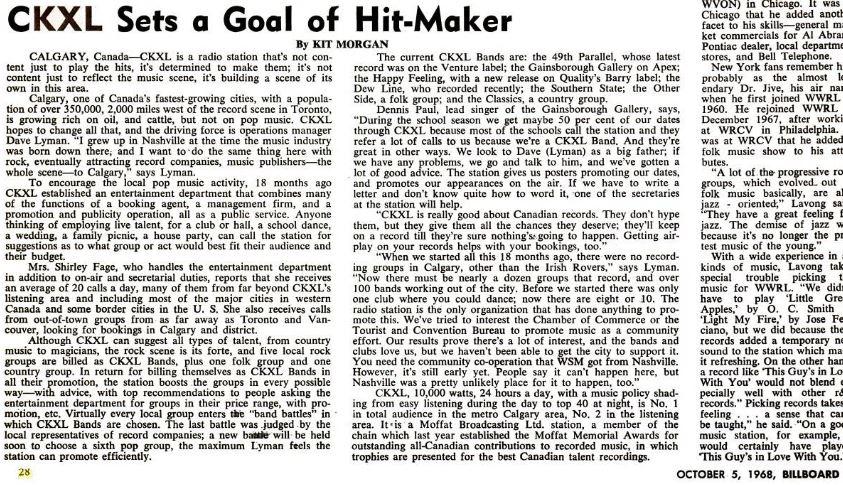 How cool for The Happy Feeling to be able to tell their friends and family that they were "Bigger Than The Beatles" this week in '68?!?!  (Of course, you've REALLY got to be careful with that sort of thing ... John Lennon made the mistake of saying that The Beatles were bigger than Jesus a couple of years earlier and there was all kinds of hell to pay!!!  lol)

Canadian airplay policy dictated that a certain percentage of ALL music featured had to be of Canadian origin.  As such, several artists had hits there that were never even heard of here in The States just south of the border.  (You'll see these tracks noted on the survey above with a little (C) after the artist's name.)

Leapy Lee's got a Top Three hit again this week with "Little Arrows" ... I still don't understand why this wasn't a bigger hit nationally based on some of the recent charts we've seen.

11/10/68 – Jefferson Airplane cause headlines the following day after Grace Slick appears in black face make-up during an appearance on The Smothers Brothers Comedy Hour and gives the black fist power salute at the end of their performance of “Crown Of Creation.”


11/13/68 – Rolling Stones Guitarist Brian  Jones buys Cotchford Farms in Sussex, England.  Author A.A. Milne wrote “Winnie The Pooh” here and there were still statues of Pool characters on the grounds at the time of Brian’s purchase.