Episodes of that new Brady Bunch reunion program, "A Very Brady Renovation," began airing last night and curiosity got the better of me.  It's actually pretty interesting at the attention to detail (and the number of modifications) they're having to make to full restore The Brady Bunch House to all its 1970's glory.
HGTV paid $3.5 million ($1.6 million over the asking price!) for the original home used in the exterior shots only of the popular TV series.  NONE of the scenes were filmed in the real home ... they were all shot on a sound stage ... yet the goal is to renovate the actual real structure to match the look of the rooms shown in the long-running series.
The fact that the original cast of Brady Kids have all reunited to participate in all of this is amazing in and of itself.  (Sadly Mom Florence Henderson, Dad Robert Reed and beloved maid Alice, Ann B. Davis have all since passed on.)
Check it out if you get the chance ... it's actually better than I thought it would be.  (kk)

And, while watching A Very Brady Renovation, I saw back-to-back commercials that featured Jackie Wilson's "To Be Loved" and Brenton Wood's "Oogum Boogum Song" ... talk about your strange choices in musical advertising campaigns!  (kk)

>>>I swear there was a week where WLS showed the artist as Sweden Heaven And Hell ... but I can't find it anywhere.  Yet I still seem to clearly remember seeing it (even some 50 years later!)  kk
The original Billboard Hot 100 charts showed the artist for "Mah-Na-Mah-Na" as "Sweden Heaven And Hell" Soundtrack, which is a paraphrase from what was shown on the original Ariel Records label [attached]; Piero Umiliani was shown as the songwriter, not the artist. (The original Cash Box charts listed just the label and number, without an artist.) Following Billboard's example, I show "Sweden Heaven And Hell" Soundtrack as the artist on the SuperCharts (#50 with a bullet on the SuperChart dated Sept. 20, 1969).
– Randy Price 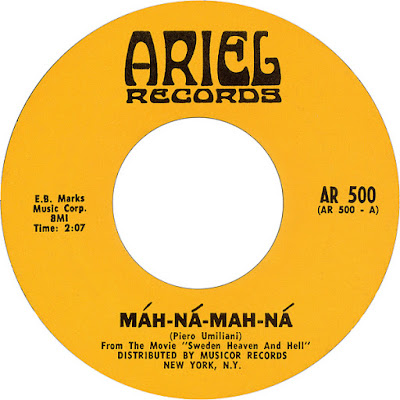 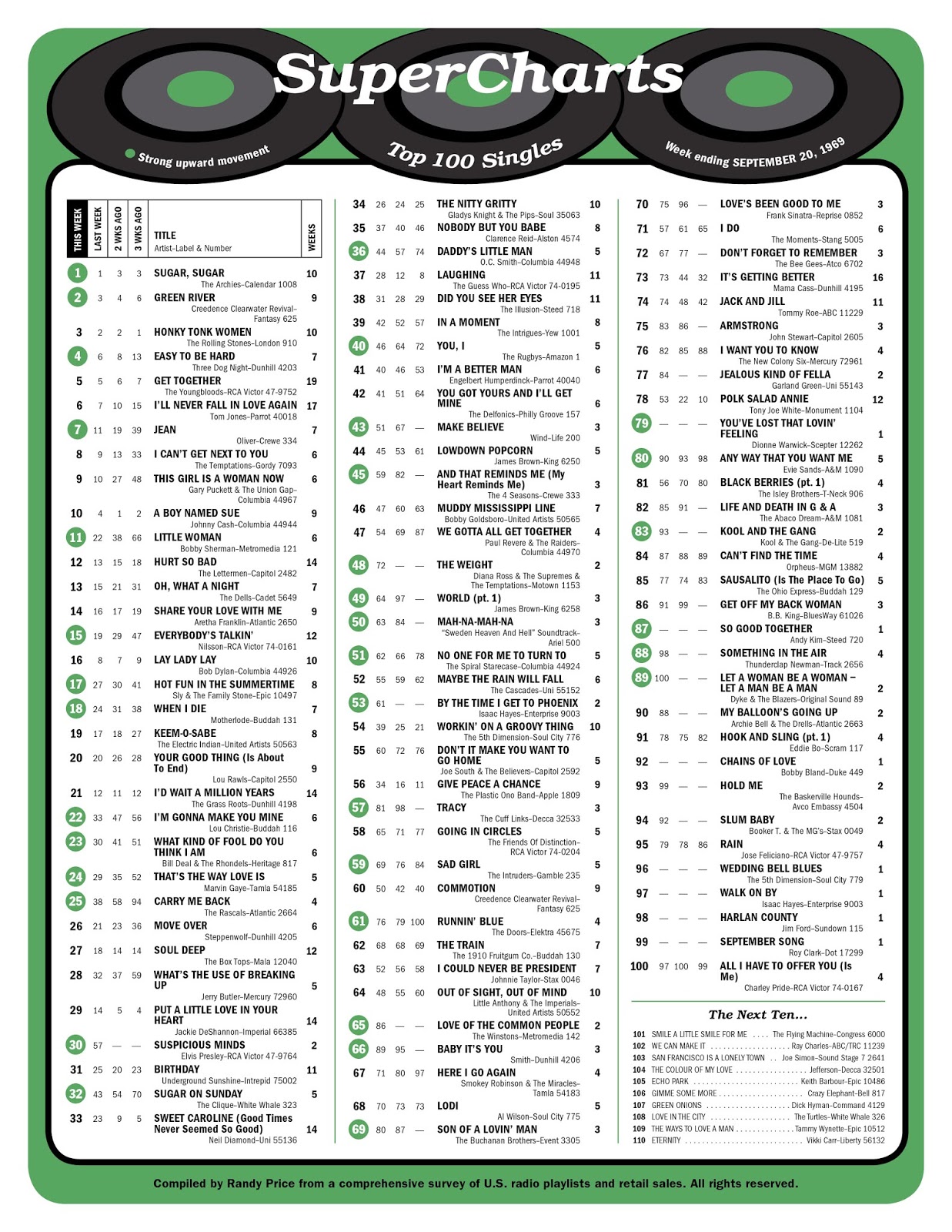 You've really gotta wonder who came up with the marketing idea to release this as a single back in 1969.  (It performed best nationally in Record World, who listed the artist as simply "Soundtrack," where it peaked at #38.  Cash Box ranked it at #44 while Billboard showed it at #55.)
I sure hope Piero has been able to collect his royalties over the years ... this goofy little melody has probably been heard more times than "Yesterday," "You've Lost That Lovin' Feeling" and countless other "ranked hits over the past 50 years combined!
Hard to imagine, too, any of these publications listing it WITHOUT an artist's name ... certainly not the norm ... but great information to know.  Thanks, Randy!  (kk)
Rock Author Mark Bego was honored with another book release party last week in Los Angeles for his new book "Living The Luxe Life" (Skyhorse Publishing), written with hotelier Efrem Harkham.  Appropriately, the event took place at Harkham's Luxe Sunset Hotel ... where guests included Mary Wilson (who arrived directly from the set of Dancing With The Stars), "Band Of Gold" singer Freda Payne and actress Rebecca Holden from TV's Knight Rider.
Bego's book with former Supreme Mary Wilson comes out later this month in the US.  (It's already a best seller overseas!)
PR Guru David Salidor sent us this picture of Freda, Mark and Mary to share EXCLUSIVELY with our Forgotten Hits Readers. (Thanks, David!)  kk 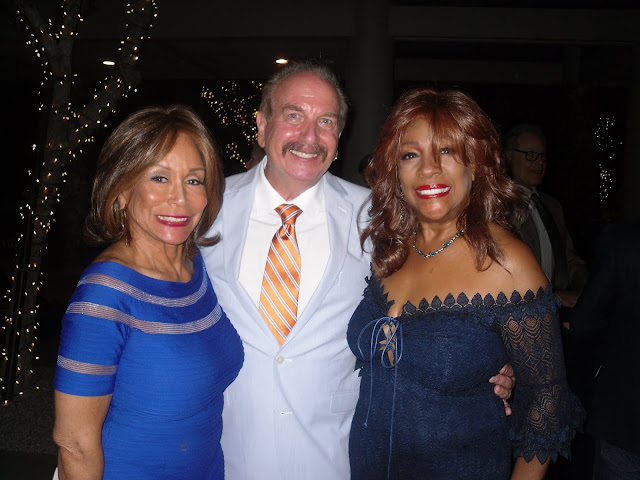 Forgotten Hits is giving away FIVE copies of the new Mary Wilson / Mark Bego book "Supreme Glamour" ... and will be drawing the winners later this week!  (kk) 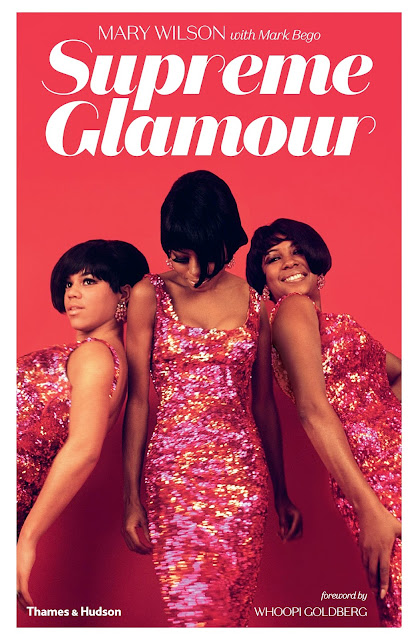 Hot on the heels of opening for Steely Dan for two nights at Ravinia last week, Dinosaur Exhibit has just been booked to perform at Ron Onesti's Evanston Rocks on Saturday, October 12th.  (We heard from both Quent Lang and Jerry Smith of Dinosaur Exhibit on this one ... sure to be a very hot ticket!)  kk
Hey Kent:
As you know, we opened for Steely Dan two nights this past weekend, and had a wonderful time. The crowds were enormous!  We received standing ovations both nights, hung with Donald Fagen and Company before the shows (some of us have crossed paths before), made a ton of new musical friends, and signed a boat load of autographs. Truly a magical weekend.
We will be doing Ron Onesti's  EVANSTON ROCKS on Saturday, Oct 12th, and we will be bringing back Jerry Goodman for this show.
Here's more info ... hope you can make it out.
http://evanstonrocks.com/events/dinosaur-exhibit/
Quent Lang
Just off the heels of two nights with Steely Dan at Ravinia, we are proud to announce that we will be performing at Evanston Rocks on Church Street in downtown Evanston on Saturday, October 12th.
This is a very cool club that holds about 300 people and they have a fun Italian restaurant next door named Rock N' Ravioli.  Jerry Goodman will be with us on electric violin and I promise you a great show!
This will be our last appearance in 2019, so it would be great if you could come out and support us.
Tickets are now available and there will plenty of seating for everyone.
We do expect a sellout, so please purchase your tickets early.
Here is the link:
http://evanstonrocks.com/upcoming-events/
Hope to see you there for a great evening of music, drinks, etc.!!
Thanks,
Jerry Smith
And check this out ...
ZZ Top is coming to The Genesee Theatre!  (I've got to admit that THIS is a pairing I never expected to see!  lol)
The concert takes place on Saturday, November 2nd ... but the ticket presale starts today ...
https://www1.ticketmaster.com/event/070057159D902288?CAMEFROM=CFC_GENESEE_EMAIL_PRESALE_ZZTOP
(just use the special presale code GENESEE)
This should be a killer night of music.  (We're going to the Genesee this weekend to see The Alan Parsons Project, one of our all-time favorites!)  kk
From Forgotten Hits Sunday September 8th ...
>>>September 2nd – The very first ATM machine in The United States is installed.
An “ATM Machine?”  Wouldn't that be an “Automated Teller Machine Machine?”
Yep, it would!  Redundantly redundant!
CB CB
Would you believe that about three weeks ago I used an ATM (machine) for the very first time in my life?!?!  It's absolutely true ... but in order to activate my new bank card, I HAD to use one.  (Crazy, no?)
I'm just dreading the day when I have to update my cell phone ... gonna miss that rotary dial and roman numerals!  (kk)
Posted by Kent Kotal at 6:21 AM