Came across some interesting links this week so I thought I'd share ...

I think that most would agree that one of the greatest live performances of ALL live performances ever has GOT to be The 1984 Rock And Roll Hall Of Fame Induction Ceremony posthumous tribute to George Harrison as a solo artist as an all-star band led by Jeff Lynne, Tom Petty, Steve Winwood, George's son Dhani and a lead guitar solo performed by Prince has got to rank right up there at the top.

But the back story behind Prince's participation ... and the fact that no full-blown rehearsal for this performance ever occurred is the stuff of TRUE rock and roll legend.  (Meanwhile, where Prince's guitar went after it was launched up into the air at the end of the performance may be one of rock and roll's greatest mysteries!)

I don't care how many times you've seen it ... take seven minutes and watch it again.  You'll still find yourself mesmerized by this incredible display.  (kk)

Read the back story here:
https://wxrt.radio.com/prince-while-my-guitar-gently-weeps-rock-and-roll-hall-of-fame?utm_source=second-street&utm_medium=email&utm_campaign=RADIO.COM+Music+9%2f6%2f19

FH Reader Tom Cuddy sent us this clipping stating that vinyl will likely outsell CD's in 2019.  (That would be the first time since 1986.  Who would have EVER thought?!?!)
Of course the #1 source for purchasing music these days is downloading and streaming ... and, fortunately, there are now over 50 million tracks to choose from!
As such, people are buying a lot of physical CD's anymore ... but vinyl seems to have captured the collectors' market.
https://www.rollingstone.com/music/music-news/vinyl-cds-revenue-growth-riaa-880959/

Well, I still buy CDs (and listen to them in the car!) ... and the release I can't wait for right now is the upcoming Abbey Road 50th Anniversary box set.
Apple released a promo copy of the newly remixed version of "Oh! Darling" last week ... and it sounds amazing.  (Give a listen ... but crank it up loud to truly appreciate just how good this thing really sounds!)  kk

>>>I have NO idea who Pete Howard is ... nor have I ever seen a pressing of the record with that name on it.  (kk)
Kent,
I am pretty sure this was a WLS joke listing of Pete Howard on the survey as the artist for Mah Na Mah Na.  I am guessing that, with about a 70% accuracy hypothesis, this a combination of two of Chicago's most famous record promoters of the 60's, Pete Wright and Howard Bedno!!!
BOTH were instrumental in helping Chicago 60's pop artists get radio airplay.  Wright arranged, produced and promoted many artists including the New Colony 6, Patti Drew, the Exceptions, the Mob, the Little Boy Blues and the Riddles and Quill Records was the brainchild of his that signed so many Chicago artists back in the 60's.  Besides artists that went on to bigger fame, Quill produced albums for WLS, WCFL and even the Chicago Cubs back then.
The two created a music promo business together in 1968.  Results included the below 45, my PERSONAL #1 song of 1969.  Their names adorn the 45.  There are a handful of CDs featuring Quill Records' output.  Bedno had been a promo man since the 50's, working a lot with USA Records and All State Record Distributors in Chicago.
Do the two together make ONE "Pete Howard"(???)  I am thinking SO!
Maybe Clark Weber played an "inside joke" or maybe Ray Graffia knows????
Clark Besch 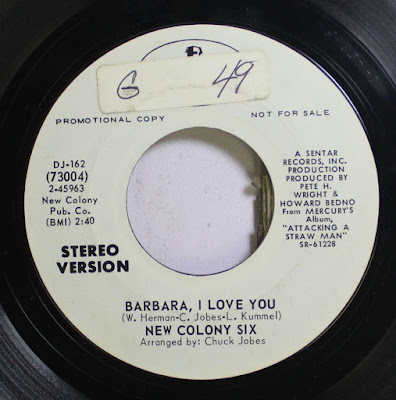 I never would have even considered this possibility in a million years.  This would make for a really odd scenario if all of this is the case.
As to my query as to why the label was listed as Ariel Records, that IS the label that released the commercial hit version of the song by Piero Umiliani.

I swear there was a week where WLS showed the artist as Sweden Heaven And Hell ... but I can't find it anywhere.  Yet I still seem to clearly remember seeing it (even some 50 years later!)  kk
Actually, checking my weeks the song charted on WLS, the label is spelled correctly and never listed artist as "Sweden Heaven & Hell."  I am thinking the two promo men were pushing this 45 early and when someone at WLS said, "Who's it by?" they told them "Well, we don't know. You can just throw OUR names on the survey" and maybe that's what they did at the Big 89 as an inside joke (???)
As Larry Neal mentioned, they listed a duo of people on the WKY chart in OKC as well.  Maybe the whole NO NAME thing was a prank to let stations decide HOW to list the artist???
Clark
I think where I'm getting the Sweden Heaven And Hell thing is that this is the way it was shown on the reissue 45 I bought back in the 1970's.  (The movie is also referenced in Joel Whitburn's Top Pop Singles book ... and has been for years.)
Still pretty incredible to think that WLS would do this ... but hey the WJJD / Top Tunes Of Greater Chicago charts would have fun with their listings all the time!  (kk)

Kent ...
I saw Wednesday’s piece and will venture a guess as to Pete Howard.
Our management team was Pete Wright and Howard Bedno and both were promo guys in addition to managing us.  I believe that Howard may have passed away a few years ago – I'm not sure – but I think Pete is still around.
Ray Graffia, Jr.
Yes, I remember covering the story after Howard passed.  Never had the opportunity to meet or talk with either of these two guys but they are nothing short of legendary here in Chicago as to who worked to get music played on our two big Top 40 stations.  (I know Pete was still around several years ago when I did the New Colony Six series because Ronnie Rice told me that he still spoke with him from time to time.  Wonder if we can track him down for a definitive answer to this Mah-Na Mah-Na mystery?!?!?)  kk

I don't know how many dozens, hundreds, (thousands?) of times I've looked at the 9/8/69 survey, including when I sent you the copy you posted, but it's the first time I noticed the misspelling of Bob "Dyan". Is he related to Dyan Cannon?
Jack

CLASSIC ROCK UPDATE:
In hindsight, how I EVER thought I would have the results of this mammoth project ready in time to start sharing over Labor Day Weekend is nothing short of ludicrous!
I am STILL processing votes some ten days later (although I will admit that I am finally starting to see a glimmer of light at the end of what still remains a very long tunnel!)
I can only assure that the final list IS coming ('tho I hesitate to even speculate as to a launch date yet as there are still several areas that need to be addressed, most importantly the massive number of "ties" we're encountering along the  way.)
We'll continue to keep you posted.
But in the meantime, I CAN assure you of this ...
This is going to be one INCREDIBLE, eye-opening countdown once we wrap things up.
We have GOT to find some way of having the final results broadcast ... this is a countdown that deserves to be heard ... in fact, if classic rock radio is EVER going to improve itself, it NEEDS to be heard.  (Reading the list is one thing ... and it's sure to trigger more memories ... and frustration ... than you can imagine.  But HEARING the list drives home the very essence of what we've been talking about these last several months ... these songs DESERVE to be heard, even if it's only once in a while to remind us of how great they really are.)
So please continue to be patient ... and watch for updates as they become available.  (kk)
Posted by Kent Kotal at 6:29 AM