All of this recent talk about radio ads has sparked quite a bit of mail … as well as initiated some interesting trades between collectors on the list … which we are always happy to help do.

But now WE’RE determined to find one, too.

After Mike Dugo mentioned a New Colony Six ad the other day that they recorded for Topps Department Store in early 1966, we’re now intrigued … and want to find a copy for our collection and to share with the members of the band … who don’t even have a copy in their own collections.

More on that later …

But first, just a few other tidbits from along the way.

(We can’t possibly run all of the mail we’ve received on this topic in the past two weeks … much of it includes extensive “want lists” of material that in many … if not MOST … cases, collectors have been searching for for decades!  But we will run the occasional list … or partial list … where it seems fit.)

Meanwhile, if you’re a radio ad collector, especially those recorded by some of the biggest recording acts at the time, we would love to hear for you and continue this Jingles Exchange!

>>>Hey Chuck, I didn't get my prize!  Does CB stand for Canfield Boy?  (Jack)
HA, Jack!  I know we did this, but I don't remember anything about it like HOW it was done, much less the Awarding of any Fabulous Prizes!

Thanks so much for mentioning Coke jingles on your great site.

We seem to have hit another hot button here with these radio commercials recorded by some of the biggest recording artists at the time.

But even MORE surprising is the focus on many of the acts who WEREN’T as well known but were still getting work cutting ads.  Some of the artists whose names have come up of late on some of these want lists are pretty amazing … and, being big fans, we’ve chosen to focus on The New Colony Six and THEIR ad for Topps Department Store.  Consider it our own personal quest!

Now I’m thinking that this had to be recorded and released in early 1966 when their song “I Confess” was ruling the charts here in Chicago.  (It peaked at #2)

I’ve asked around thru all of the usual sources, including talking to several original members of The New Colony Six who would have been present at the time … but nobody seems to have a copy … not even the guys in the band! Even the band’s official historian, Jerry Schollenberger, has been searching for a copy for years … and admits he’s never even HEARD it!!!

So we’re putting the word out there that this is our new latest search.  We are OFFICIALLY “on the hunt” for this NC6 Topps ad.  (My guess is the best bet might be to find somebody who has an old WLS aircheck from this era that just happens to have the ad included in it.)

Anyway, please let us know if any of you have any insight as to how we might get a copy to share with the rest of the class.  Thanks!  (kk)

I've searched for many, many years trying to find a copy of the NC6 Topps Department Store recording but have never been able to turn it up. As a matter of fact, I've never even heard it. I'm thinking that it was used only as promotion for the regional Topps Dept. Stores in the local Chicago and surrounding areas.

As far as printed ads are concerned, the only one that I've ever seen, is the full-page color ad that the New Colony did for the 1969 Montgomery Ward catalog plugging the Monkey Ward brand musical instruments (which I have intact in that entire catalog.)  It's not to say that the group didn't do other printed ads for regional purposes. In fact, the NC6 did do a full-size poster for the Tastee Freeze Ice Cream chain back in the late-60's, (which I have), that was given away to customers who bought certain ice cream items at Tastee Freeze locations.

The one NC6 artifact that I would give my left arm for is the never-surfaced 1968 video that the Colony filmed for their big hit, "I Will Always Think About You," which the group traveled to (I believe Ray told me) down to Arkansas to film.

Again, although Ray Graffia, Jr. and the other group members at that time vividly recall filming the video, it never surfaced anywhere, and was unjustly shelved into oblivion. Finding a copy of that 1968 video would be the Holy Grail for me.

Would love to get a copy of that video as well … never even knew it existed.  (Wondering what program it was filmed for!  Actually, promotional videos were still a relatively  new concept at that time … so pretty rare … one can only wonder how much bigger hit “I Will Always Think About You” may have been had a video also been circulating as various television spots.  It topped the charts here in Chicago … and rose to #19 nationally … could this additional exposure pushed it into The National Top Ten?!?!)

I would also love to share the Tastee Freeze ad with our readers if you’re able to scan a copy for us.  (I remember coming across the Montgomery Ward musical instruments ad before … but I swear I remember them also doing a clothing ad of some sort … maybe for J.C. Penney’s???)  Anybody out there got any recollections on this one???  (Meanwhile, I can’t seem to find my copy of the Wards ad either … so if you wouldn’t mind, please scan this one as well and send it along.  Thanks, Jerry!)  kk

In regards to the filmed video, I have never seen the "I Will Always Think About You" video … you might want to reach out to Ray Graffia, Jr., to get his take on this … but my guess is that both Mercury Records (the label that the NC6 were signed to at that time) and their manager, Pete Wright, were responsible for that decision to have the guys film the video. It still boggles my mind as to why that video was never shown anywhere, or surfaced anyplace else even once in the last 53 years. It's no real secret that Mercury pretty much neglected to put any real promotional muscle behind the group the entire time that the New Colony Six were signed with the label, so it might just be a case of Mercury dropping the ball on using the video for promoting the group once the video was shot. I personally went up to the offices of Mercury Records on Wacker Drive in downtown Chicago back in 1977/78 to try to see if they could supply me with any NC6 artifacts of any sort, and the suits in charge there pretty much blew me off, saying that they didn't have even any old promo photos or anything else on the group.

Getting back to the NC6 Topps ad, I seem to now recall that someone (who I now can't remember after all of these years), told me that they heard the Topps radio bit on the air somewhere down in Indiana.  I tried researching that angle, too, but came up with nothing.

Well, you’ve definitely piqued our interest with this one … so we’re going to do a little bit of digging of our own (with the help of Forgotten Hits Nation, of course!)  lol  - Thanks, Jerry!  (kk)

And these from some of the original Colony members, circa 1966 …

While I do not have a copy of it, Kent, I definitely do recall us doing it.  We sang, if memory serves, “I confess to have a willingness and wanting for Topps (Topps)!” but I don’t think we ever got a copy, and that’s the extent of what my now 75+ year old brain can remember.  Wish I knew more but can share that a few years before my dad passed away, he had oodles of Centaur / Sentaur / Sentar and Colony schnike stored in his basement, which subsequently flooded, and all that memorabilia was lost and tossed.

The commercial was done pre-Ronnie and since I am pretty sure you know how to contact at least Chic, Walt, plus probably Gerry and Craig (all blind copied here to respect them; they can chime in directly if they want and have anything more or different to add) and surely you must have a means to reach out to our primary historian, Jerry Schollenberger, to whom I am sending a visible copy of this note, maybe one of the other guys somehow got hold of the jingle or at least have better / more extended memories of the event to share with you.

P.S.  Since Chic sent me this recently, and I am not certain I sent it to you, attached please find what I believe may be the only picture of most of us as “The Patsmen” – taken during the summer of 1964 after GVK, Pat, Chic and I (as did Walt Kemp) graduated from St. Pat’s. 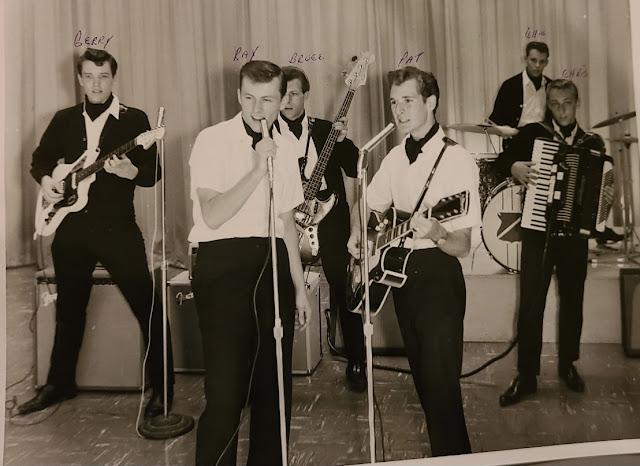 · Our bass player, Bruce Sneath, 2-3 years older than us, got drafted and passed away a few years ago now, though did play a role with us as roadie once back from his service.

· Pat, who did not play guitar but became killer on harmonica, liked to embellish things now and then.

· Our accordion player, Chris Wolski, who is still among the living but was forbidden by his dad to stick with the band (as he was two years younger than us), was forced to quit.

As a result of C.W.’s family interference and Bruce’s getting drafted --- if my memory is up to par this morning, Wally AKA Walt became our bass player and his cousin, Craig AKA Greg, took over on keys, just prior to our renaming ourselves to New Colony Six. 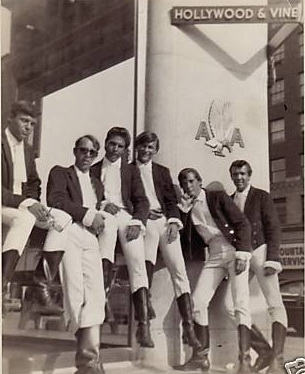 Well wishes to you and yours – holler anytime.

Love to you, Frannie, the grown-up Paige, and any other unnamed Kotals and/or FH readers whose days are made when you release the next edition of Forgotten Hits!

The exact line was "I confess to have a willingness and wantingness to shop at Topps."  I had a reel to reel at one time. If I could find it, I am sure it has deteriorates beyond use.

Chris Wolski does not live far from me in Georgia. We had the opportunity to lunch together during the holidays. He is a famous Santa for charity functions in the area ... had quite a music career as a concert producer as well.

If ANYBODY out there can help us locate a copy of this very rare NC6 Topps Department Store ad, please drop me a line!  Thanks!  (kk)

That reel-to-reel copy may be our only shot at locating this … I say it’s worth a shot to see if it plays at all.  (Then, of course, we’ve got to figure out how to turn it into an MP3!!!)  kk

Best as I can recall, all that Ray said is totally true, “give or take a lie or two”.