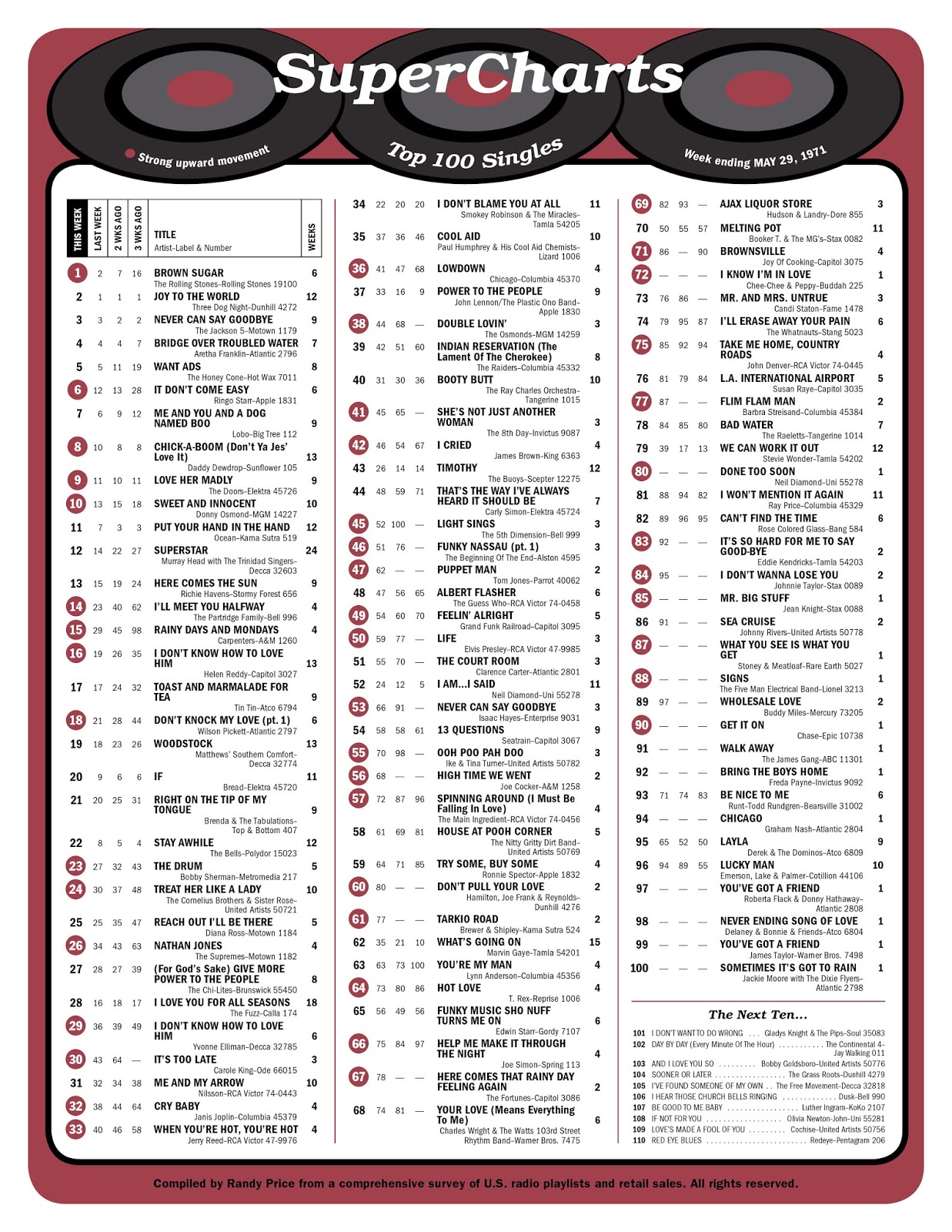 We've got a brand new #1 Record this week as "Brown Sugar" FINALLY surpasses "Joy To The World" to take over the top spot on our Super Chart.

Ringo makes the biggest leap within The Top Ten as "It Don't Come Easy" climbs from #12 to #6.


And Jean Knight's "Mr. Big Stuff" is new at #85.  It'll be a timeless pop and soul hits for the next half-century and beyond!

"Signs" by Canada's Five Man Electrical Band shows some interesting perspective (especially after reading about Peter Cetera's mugging at Wrigley Field the week before!)
[NOTE:  We have since learned that this incident happened in 1969, not 1971 as previously reported ... but still a nice tie-in, nonetheless!]
And, speaking of Chicago, Chase debut this week with their biggest hit, "Get It On," new at #90 and Graham Nash has a solo hit CALLED "Chicago," which premiers at #94.  (It, too, is a political statement, referencing the recent Chicago Seven trial.)

Squeezed in between at #91 is "Walk Away" by The James Gang, featuring future Eagle Joe Walsh ... and there was something ULTRA catchy about Delaney and Bonnie's "Never Ending Song Of Love," too.  It's new at #98.


James Taylor covers a Carole King tune from her hot "Tapestry" album ... "You've Got A Friend" premiers at #99 this week.


May 27th – The Bells are awarded a Gold Record for their hit “Stay Awhile.”  (It will be their only US hit.)  The duo consisted of singers Cliff Edwards and Jackie Ralphs, whose breathy delivery propelled the song to the top of the charts.

Also on this date, Lisa Lopes (Left Eye) of TLC is born.  (She will die in a car crash in 2002.)  She was always the “colorful” one in the group … in 1994, she was sentenced to five years probation after setting fire to the house of her boyfriend, NFL Football Player Andre Rison.

May 29th – “Brown Sugar” becomes The Rolling Stones’ sixth #1 Hit on The Billboard Hot 100 Pop Singles Chart  (You'll find it on top of this week's Super Chart as well.)

Also on this date, over three dozen unsuspecting Grateful Dad fans are treated for hallucinations after drinking apple juice spiked with LSD at San Francisco’s Winterland.   Although they were never officially charged, it is believed that the band added the drug into the mix.
Posted by Kent Kotal at 6:00 AM