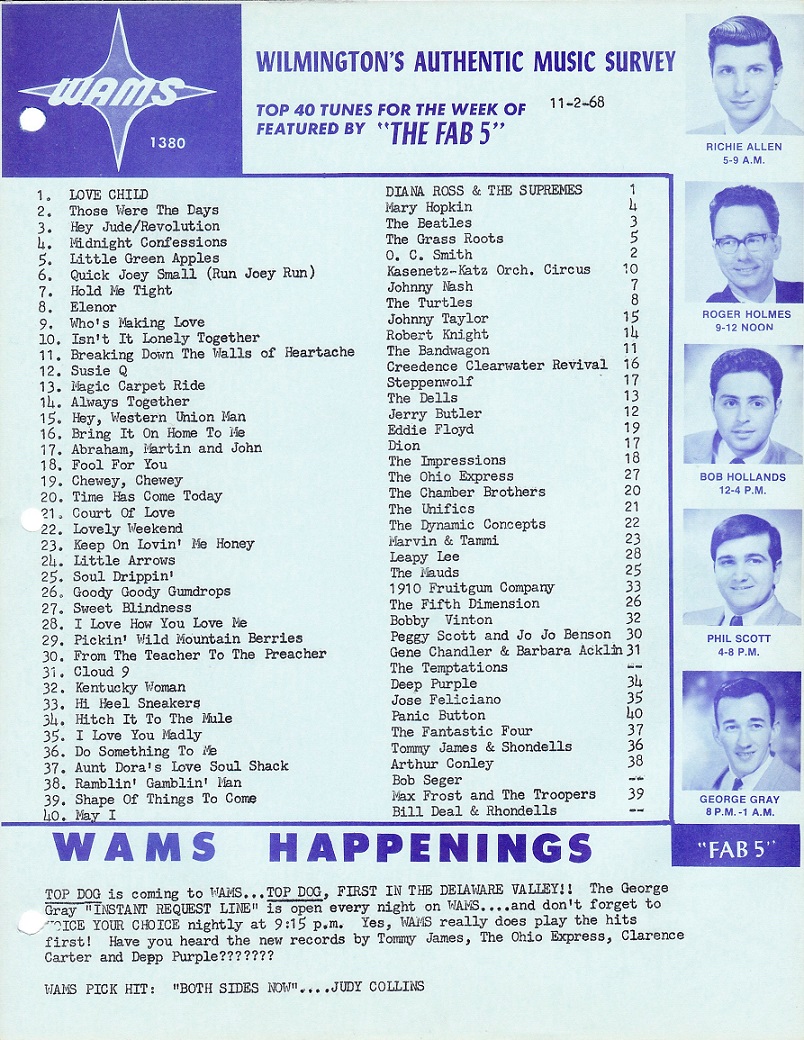 Wilmington, with 72,000 people, is the largest city in Delaware today.  Despite its' relatively small stature, it was first settled in 1638!  In 1968, WAMS clung to the top 40 format with a pretty normal survey (including spelling errors) for the day with a bit of added RNB power.  Despite that the recently deceased Robert Knight has always been known since as a one hit wonder ("Everlasting Love"), WAMS tried to prove differently charting one of his followups, and oft-recorded, "Isn't it Lonely Together" at #10 this week.  Another singer seemingly on his way out after a big hit in 67 was Arther Conley, whose "Aunt Dora's Love Soul Shack" (#37) was far flung from his soul anthem of 1967, "Sweet Soul Music."
-- Clark Besch


Arthur Conley's next chart hit would be a cover of The Beatles' "Ob-La-Di, Ob-La-Da," fresh off the newly released White Album.

It looks like they were selling quite a bit of bubblegum up in Delaware at the time ... "Quick Joey Small" sits at #6 for the Kasenetz-Katz Singing Orchestral Circus while "Chewy Chewy" by The Ohio Express and "Goody Goody Gumdrops" by The 1910 Fruitgum Company are holding down the number 19 and number 26 positions respectively, both on their way up the chart.

And check out The Mauds at #25 with "Soul Drippin'" ... this is a GREAT overlooked track (so we've gotta feature this one!)


And I can only describe The Turtles' latest as my pride and joy, etcetera!  (kk)

George Harrison’s soundtrack album “Wonderwall” is released in England.  It is the first album to be released on The Beatles’ own Apple Label and is considered to be the first solo album ever released by a Beatle.  Featuring primarily instrumentals, the mostly Indian tracks include guest appearances by Ravi Shankar, Eric Clapton, Ringo Starr and an uncredited Peter Tork on banjo.

11/2 – Cream is presented with a platinum album award for their two-record set “Wheels Of Fire,” representing sales of over two million copies.  It all takes place at their performance at Madison Square Garden in New York City as part of their farewell tour.
Posted by Kent Kotal at 6:00 AM