Some Of Your Mid-Week Comments ... And A Bit More Head Scratching!

Due to "re-purposing" some of their cable channels, Me-TV-FM has been dropped from Comcast / Xfinity's simulcast on Channel 877.

This was disappointing news as we enjoyed putting this on in the background while getting some chores done around the house.  (It's even more frustrating for me since I can't listen to the station in the car .. but I HAVE been listening to Me-TV-FM-Milwaukee at work quite a bit lately.)

Comcast / Xfinity, which had been featuring the over-the-air broadcast of 87.7FM on its Channel 877 since 2011 (when 87.7 was a smooth jazz station), decided to discontinue the simulcast as of December 1, 2018.  They are re-purposing several of their channels and, despite the numerous conversations our management had with them over the past several months, they would not reconsider. Sadly, I’ve heard from several listeners who were told by Comcast customer service that it was Weigel Broadcasting that pulled out.  This is not true.
Rick

You'll find seven Rock And Roll Christmas Classics back in Billboard's Top 50 this week ... and they don't necessarily rank in the order these so-called radio experts told us they should because THIS chart is based on actual downloads.  (What I mean to say is, THESE are the songs people are actually BUYING this holiday season.)

Here are the seven most popular Christmas tunes according to this week's Billboard Hot 100 ... showing their ranking (#1  - #7) in terms of popularity, their actual Hot 100 chart position, and the popularity ranking given before the holiday season started by the programming gurus that determine what we actually hear on the radio these days.  (As you can see, what we get isn't always necessarily what we want!)

Top Ten Programming Favorites that THEY say we should be listening to ... but notably missing from this list include:
BURL IVES - RUDOLPH THE RED-NOSED REINDEER
JOSE FELICIANO - FELIZ NAVIDAD

After catching part of the SNL Christmas Special last night I've got to wonder ...
How come "Dick In A Box" isn't on anybody's holiday playlist???  (kk)

THE BOX TOPS!!
We wish you all a wonderful holiday season ...
peace, joy, health, and prosperity in the new year.
Thank you for your support in helping make the BOX TOPS popularity continue to grow! We could not do it without you.
Looking forward to working more in the future with you.
THE BOX TOPS
Members Memphis Music Hall of Fame
kk ...
12/4/1956 --- the date of the "Million Dollar Quartet" recording at Sun Records in Memphis, TN. 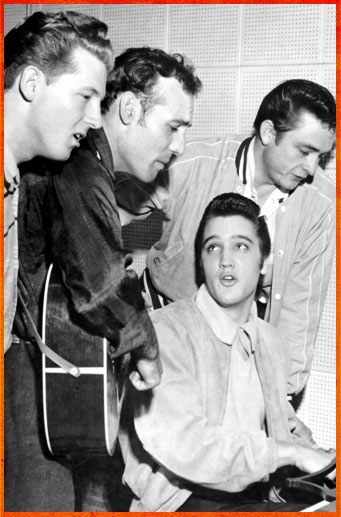 In an interview, Don Imus once asked Jerry Lee Lewis what he was thinking when this picture was taken.
The Killer said "I was wondering why Elvis was sitting at the piano."
FB
https://www.youtube.com/watch?v=vKpg3PkGlZs


Meanwhile, we're still trying to figure out when The Rolling Stones first played Rockford, IL ... with a little help from our friends and readers.  (I emailed a couple of old high school chums who I seem to remember also being at this concert but haven't heard back from any of them as of yet.)

Here is what we HAVE found out so far ...

Kent,
Wikipedia shows the Stones at the Metro Center in Rockford on Oct 1st of 1981 as part of their 1981 American tour.
Hope this helps.
https://en.wikipedia.org/wiki/The_Rolling_Stones_American_Tour_1981
Dave
Hoffman Estates
That's the one that we keep finding, too ... but that would have been too late ...

Meanwhile I also found the following information through Wikipedia ...

That's a pretty tight and full schedule.  I thought they doubled-back to play Rockford as it wasn't part of the original game plan ... but I don't even see much of an opportunity to do so ... so now I'm starting to question my own sanity instead!!!

We even found the most-common set list (along with a few variations) ...

Encore: often none, but sometimes "Honky Tonk Women", a few times "Uptight (Everything's Alright)" / "(I Can't Get No) Satisfaction"


Apparently the 1981 Rockford show is on YouTube.
https://m.youtube.com/watch?v=qK9RD12ipG8
I am completely unaware of an earlier show.
(The Stones played two shows at the International Amphitheater in Chicago that year.)
[According to the list above, they actually played THREE ... could one of THOSE shows been subbed out for Rockford???  Maybe the first date???  Honestly, I don't see how, as tickets would have most likely already have sold out by that time. -kk]

I can't imagine a show of that magnitude coming to Rockford in 1972 without anyone knowing about it. The only show I remember hearing about, and not attending, was the Beach Boys at the local YWCA in 1965. I think it was one of their first shows on their first tour.
As far as outdoor venues go, there really weren't any at the time. We had a decent sized band shell at a park, but that was free. The band Fuse would play there quite often. Later in the '70s I think they started having outdoor shows at the Rockford Speedway, but once again that was later. Ted Nugent was one of the big headliners. They also had a series of shows in '72 at the Winnebago County Fairgrounds located west of town. These were good shows and the promoters lived downstairs at the time. The biggest headliner at these shows was Leon Russell. I attended all of these shows and once again no Stones.
The Armory I remember a little better. The big show there was REO Speedwagon with Badfinger as the opening act. This would have taken place in 1972. I was involved in the financing of this show as I was the only guy, it seemed, with a real full time job at the time. It was a successful as well as a good show. The REO format at this time was the make up on their first album. This was actually my favorite format versus the more successful one that followed.
Now this is a stretch but I thought I saw the Rolling Stones live in 1964 as part of the TAMI Show. The Stones and James Brown closed the show. The show was shown once at the Midway Theater downtown at 10:00 am on a Saturday morning. We thought it was one of those live telecasts similar to the ones used to televise the Indy 500 on Memorial Day. Recently I found out that it was recorded right before the show and then shown once later around the country before it disappeared. I recently found a DVD of the show with more information on it. Apparently the guy who did the TAMI Show also did the Elvis '68 Special.
Robert Campbell
And then ...
Another thought on this mystery ...
There was no Ticketron available in Rockford in 1972. I remember that starting in about 1970 and later in the '70s we had to go to Elgin to purchase tickets on Ticketron. None of the venues were connected to, or used the Ticketron system. My guess is the Metro Center was most likely the first one.
RC


Happy Anniversary.
I saw the acorn and the oak!
Keep at it.
Hil
Yes, you did.  Ladies and Gentlemen, one of the Original First 35!  (kk)
Posted by Kent Kotal at 6:00 AM