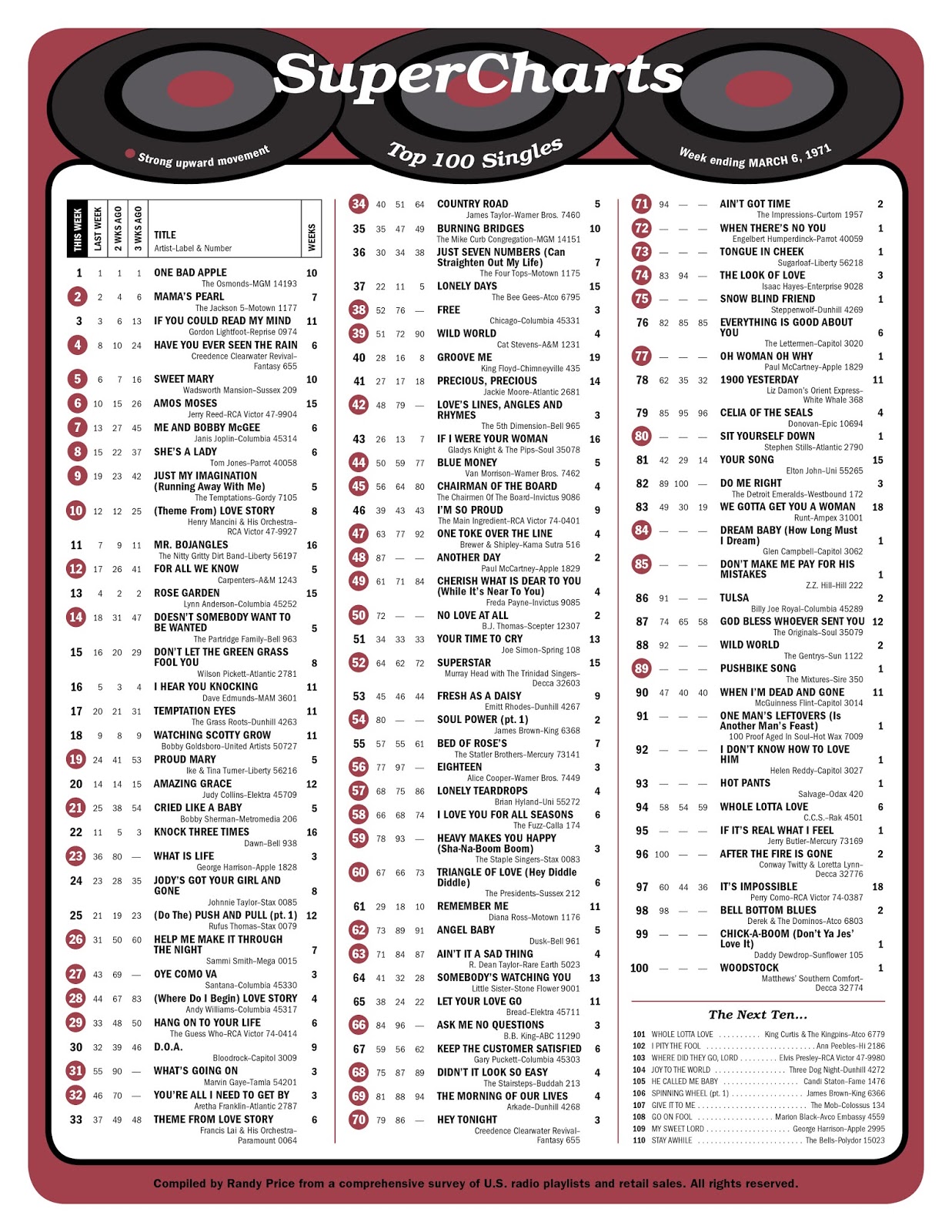 As we head into March, we still have only had THREE #1 Records so far this year ... and, with "One Bad Apple" by The Osmonds hanging on to the top spot for the fourth consecutive week, that means all three of these have now occupied the #1 spot for four weeks each!

George Harrison's "What Is Life" continues its climb up the chart, moving from #36 to #23 this week.  Former bandmate Paul McCartney makes the biggest move of the week as "Another Day" leaps from #87 to #48, a climb of 39 places!

Paul McCartney's B-Side, "Oh Woman, Oh Why" premiers at #77 this week.  I'm featuring it here more as a Forgotten Hit than a favorite because it doesn't rank as one of Macca's best-remembered tunes.  (Still, it was considered quite out of character for him at the time.)

I did like the new Stephen Still song, "Sit Yourself Down," premiering at #80 this week.  It, too, is a seldom-played track.

And Glen Campbell's remake of the old Roy Orbison track "Dream Baby" debuts at #84.  Glen would some chart success with a few remakes at this stage of his career ... "It's Only Make Believe" immediately comes to mind ... but this is one of the few remakes that I think ranks right up there with the original in terms of quality.

In Playing Favorites overload this week, I'm also featuring Helen Reddy's version of the "Jesus Christ Superstar" song "I Don't Know How To Love Him" ... (while I have never considered myself a Helen Reddy fan ... and definitely preferred the Yvonne Elliman version of this tune ... I have to admit that Reddy did a more than credible job on this one) ... as well as the soon-to-be novelty hit, "Chick-A-Boom" by Daddy Dewdrop and my FAVORITE version of "Woodstock" by Matthews' Southern Comfort, which breaks into the survey at #100 this week.  (kk)


This Week In 1971:
March 1st – A bomb explodes in the men’s room at The United States Capitol.  The Weather Underground claims responsibility for the bombing

Also on this date, South African radio stations lift their five-year ban on Beatles’ music.  (Sure, now that the group has broken up!!!)

March 5th – Now how cool is this … Led Zeppelin kick off what they are calling their “Thank You Tour,” by playing some of the UK halls and clubs they first appeared at when starting out.  Their contracts state that they will play for their same 1968 fee provided the club owners agree to also charge 1968 ticket prices at the door.
Posted by Kent Kotal at 6:00 AM