A few more comments from our readers about what's been on their minds lately ...

TJ has me on his special coming up on Murray the K.  We talked about working with Murray and my relationship with him.

Looking forward to seeing the show, which I was the announcer for on that original special

Oh man, that’s awesome!  We’ll be looking out for you!  (Johnny is certainly one of the GREAT voices of this very special era ... and he's still going strong!)  kk

I still have not figured out what I think of Murray the K.

He's a bit beatnik era DJ and yet did TV shows with great topical performers, was the 5th Beatles, the 6th Stone, had record albums and LIVE TV shows with great acts, was a New York radio and in-person legend.  He wore a fedora hat like my DAD wore.  I just did not "get the cat" as he might put it.  Still, you can't deny what influence he had in the New York City ear in the mid to late 60's.  He helped start the great WOR-FM format of allowing New Yorkers to hear the OTHER music that was up and coming from underground radio.  You just could not pigeonhole Murray "the K" Kaufman.  He was in some ways to NYC like Dick Biondi was to Chicago, but that still is not quite a good description.  Murray was bigger than life.

He was a childhood actor in the 1930's Hollywood films. He had four marriages by 1960 and his 5th lasted 18 years … and she was known as "Jackie the K."  He was married yet one more time!

By the time he became "the 5th Beatle," he was 42 years old!  Hardly a teen heartthrob age, but he brought the kids what they wanted in the 60's.  Murray helped open the door to British Invasion acts on the same stage he would have soul and pop artists from the US.  He lived fast with the changing 60's and was great in the promotion of multi-racial live shows at the Brooklyn Fox Theater.

When he moved to FM on WOR, he was able to program variety and helped make Janis Ian's "Society's Child" a hit.  He recorded and released PF Sloan's "Sins of the Family" on 45 for release.  He featured Cher's hit "You Better Sit Down Kids" about divorce and Phil Ochs' protest song "I Ain't Marchin' Anymore" on his TV shows.  He put the Doors on his shows in 1967.  The Cream, Who, Blues Project, Blues Magoos, Rascals, you name it -- all on his stages!

With his 1965 "It's What's Happening, Baby" TV show featuring top teen artists of the day being shown this weekend on PBS nationally, it might ring a few bells with east coast people, while other parts of the country may have no idea who this guy is.  His 1966 special consisted of more artists from the latest chart hits and was called "Murray the K Special for the Year 2000."  Most of Murray's TV specials had US acts from the NYC area, but Saturday night's show (showing at different times, here in Lincoln on channel 12.2 due to girl's high school basketball on the main station) also features Herman's Hermits.  The 1966 show mentioned above was similar with the Animals as the UK guests.  He would also feature the Hollies, Yardbirds and Zombies in other shows.

including:  MANY ads for his NY shows of top talent, Fan club items including card, glossy pic, 6 page (a-f) fold out of his show acts AND AUDIO of his radio shows (including the Beatles)  and Cyrkle tribute song "Murray the Why" … both sides of his Red Bird 45, "It's What's Happening, Baby" from 1965 … Both sides of his 1959 record "Murray Kaufman" (shows as Murray the K, Parts 1 & 2" on files) in which he explains his "ah-h-h-hbay" shout, if you understand what it's all about.

AND if you can watch the video, it is the Phil Ochs and Cher performances mentioned above

Nowhere To Run – Martha & The Vandellas
Walk On By – Dionne Warwick
Mrs. Brown You’ve Got A Lovely Daughter – Herman’s Hermits
Pride & Joy – Marvin Gaye
Land Of 1,000 Dances – Cannibal & The Headhunters
You’ll Never Walk Alone – Patti LaBelle & The Bluebelles
I’m Alright – Little Anthony & The Imperials
Be My Baby – The Ronettes
I Don’t Want To Cry – Chuck Jackson
My Guy – Mary Wells
The Seventh Son – Johnny Rivers
The Way You Do The Things You Do – The Temptations
Count Me In – Gary Lewis & The Playboys
Up On The Roof – The Drifters
Stop! In The Name Of Love – The Supremes
You’ve Lost That Lovin’ Feeling – The Righteous Brothers
I Can’t Help Myself – Four Tops
Ooo Baby Baby – The Miracles
What’d I Say – Ray Charles

Remember back in the ‘70’s when radio stations were promoting Bee Gees-free weekends?!?!

Listeners had gotten SO tired of the complete saturation the band was enjoying at the time thanks to their repeated success with hit after hit after hit … not only of their OWN music … but also tracks recorded by other artists, soundtrack material from the blockbuster “Saturday Night Fever” and even baby brother Andy Gibb.

Well, THIS weekend, Me-TV-FM is taking the exact OPPOSITE approach … and saluting the music of The Brothers Gibb all weekend long! (Hey, WE love ‘em … and will be listening all weekend long!)

We’ll be celebrating the music of the Bee Gees as only MeTVFM can — with big hits, little hits, deep tracks and B-sides throughout the weekend, beginning with a tribute to the late Andy Gibb on Friday, which would have been his 63rd birthday. “You, Me and the Bee Gees” will feature every Top 40 hit by the group throughout the entire sweep of their career, from 1967 to 1997, during the coming weekend.

In addition, much as they did during Black History Month, Me-TV-FM will be featuring Two@Ten (am and pm) all month long during the month of March, this time saluting the music of pioneering and influential women artists with back-to-back songs at 10 am and 10 pm each day.  It’s all part of Women’s History Month. And then don’t miss this salute on Thursday …

Thursday marks the 184th birthday of the City of Chicago … so it’ll be a day filled with artists from and based here in Chicago.

Be listening for ALL our local heroes, including The American Bree, The Buckinghams, The Cryan’ Shames, The Ides Of March, The New Colony Six, The Shadows Of Knight, Spanky And Our Gang and many, many more.

That Listen Live Link above will give you unlimited access all week long!  (kk)

And, speaking of The Bee Gees …

Here are The Bee Gees, performing on television in 1963 in their then home country of Australia.  (Not quite The Beatles … although performing one of their earliest hits … and probably more like something you’d expect to see on the Lawrence Welk or Andy Williams show, it’s hard to believe by looking at them in THIS clip that just four years later they’d be lighting up the charts here in America with “New York Mining Disaster, 1941.”)

By the time we first met The Bee Gees in ‘67, they just looked like a solid rock band brothers act … but this clip really shows the age difference between older brother Barry and twins Robin and Maurice … in both size and stature.

Incredibly, the brothers are only three years apart in age … but at THIS age, it makes all the difference in the world in appearances.  (kk)

And, speaking of The Andy Williams Show, here’s a GREAT vintage clip from 1969 of Creedence Clearwater Revival performing on Andy’s show.  (Talk about your unlikely bedfellows!)

They’re doing their big hit “Green River” … and, if you watch this clip REAL closely and try not to blink, you might even catch the OTHER members of the band besides John Fogerty!

And, if you’re as big a CCR fan as I am, you’ll really enjoy this footage of the band performing at Woodstock, NONE of which made the original cut of the movie.

And, of course, I would be remiss if I didn’t plug our OWN Creedence Clearwater Revival series from several years ago …

Mick Fleetwood says that he will work with Lindsey Buckingham again … it just may not be within the context of a Fleetwood Mac project.

However, no sooner than stating this, Fleetwood said he would LOVE to do one final full band reunion farewell, including Stevie Nicks and Christine McVie as well as Lindsey’s two current replacements, Mike Campbell and Neil Finn.  (McVie has made it pretty clear that she has NO desire to tour again … and Buckingham and Nicks still acknowledge that they have some fence-mending to do … but as we’ve learned SO many times before, never say never when it comes to these old rockers grabbing one last mega pay-day while giving their fans one last look.)

That being said, there are still rumblings about a 60th Anniversary Beach Boys Tour next year … SO many artists have already pushed their 2021 tour dates back another year.

As shown here on Monday, the surviving members (minus Brian Wilson) have gotten together to put together new fund-raising video by resurrecting their old 1970 Hit “Add Some Music To The Day.”

When we expressed an inquiry as to why Brian didn’t take part in this very special reunion, organizer David Beard told us that it was simply a case of Wilson not being available at the time.  (Keep in mind that this was all put together at the outset of the pandemic last year … so I’m sure ALL parties concerned had some obstacles to overcome.  The fact that David could put this whole thing together at ALL under these absolute worst of circumstances is a tribute to his dedication and finesse … I think it’s a GREAT sounding record and a beautiful video.  David told me that, much like it is for Feeding America, the entire project (recording / video) is a love letter to Brian.  (kk)

I watched the Golden Globe Awards last night and the movie my 1967 song "Lila" was in, "The Trial Of The Chicago 7," won for Best Screenplay ! It was nominated for 'Best Movie of the Year" also.  We will see how it does on the Academy Awards in April !

My song "Lila" is from the highly valuable collectable 'Fapardokly' album.  A sealed copy sells for over $1,000 today!

I can find issue with several of their “facts” … in fact, a few of them aren’t even CLOSE … but the proper sentiment is there.

And who would have EVER thought that The Monkees would meet the criteria for a “Classic Rock” discussion?!?!

Then again, is trying to make a case for Rock And Roll Hall Of Fame consideration for The Raspberries!!!  (Really?!?!  Not that I didn’t love these guys to death … but what was new an innovative about trying to recreate the look, sound and feel of The Beatles in the early ‘70’s???  As good as they were, I’m not aware of anything NEW that they brought to the table … but then again THAT criteria hasn’t meant a hill of beans to The Rock And Roll Hall Of Fame in the past two decades, so who am I to judge?!?!)  kk

If we’re looking to induct a Beatles sound-alike band, my money’s on Badfinger …

At least these guys DIED for their craft … literally!  Short, happy pop songs, Badfinger fell victim to the unscrupulous ways of rock and roll management.  So despondent were they to walk away penniless after a very lucrative recording career, Pete Ham and Tom Evans hung themselves.  Badfinger just may be Rock And Roll’s single greatest tragedy.  (kk)

And a couple of smiles to get you thru the rest of the week ...

First, this oldie but goodie from Mike Wolstein ... 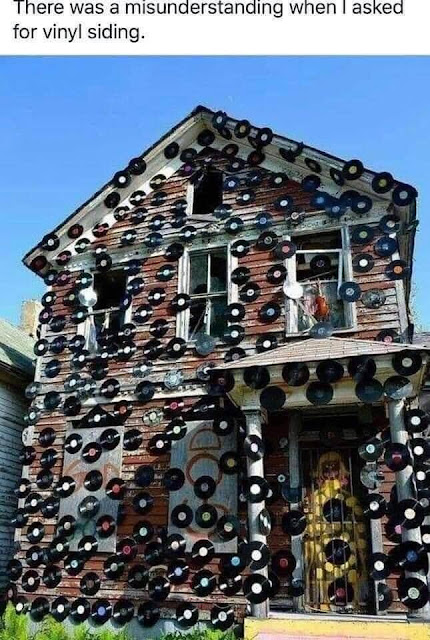 And then this one from Phil Nee ... 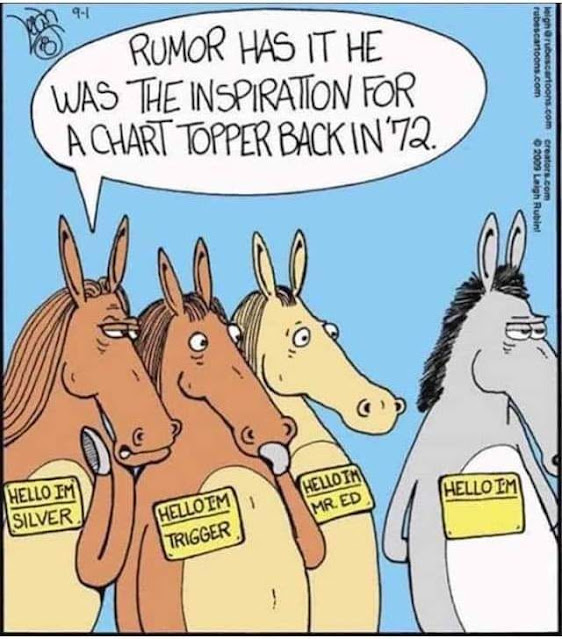