Hi, Kent ...
The piece about Dick Biondi on Saturday was great. Lots of good information in there, and it's exciting to know that the film is very close to the finish line.
I met Pam at the Route 66 Car Show on September 6, 2014, where Dick had a "tent" set up to meet and greet the fans. She was doing some filming and came over to say hello. I have been in ecstasy ever since.

Pam and I met Dick during the same year, in, well ..., but at different locations. I've been a fan ever since. Dick is one of the nicest, hardest-working guys you'll ever meet, and Pam has been working tirelessly on the movie.
When I'm in a group, or "meetup", I wear my Biondi Film t-shirt in order to put the word out about the movie; the first thing that people ask me is about his being fired for telling a dirty joke on the air. It's like that game we used to play as kids: "Telephone."  By the time the story gets to the 4th or 5th person, it's completely different.
But those same people tell me stories about sitting up at night with their transistor radio under their pillow and having their parents yell at them to go to sleep. Dick was "The Voice" back then, and still is. He's really kept us entertained over all of these years.
I am proud as hell to have been helping Pam with the film and, like everyone else, I'm on pins and needles to see it released. It's going to be great.
I beg everyone out there to help out in whatever way possible, so we can get the film on the air.
Mike Wolstein 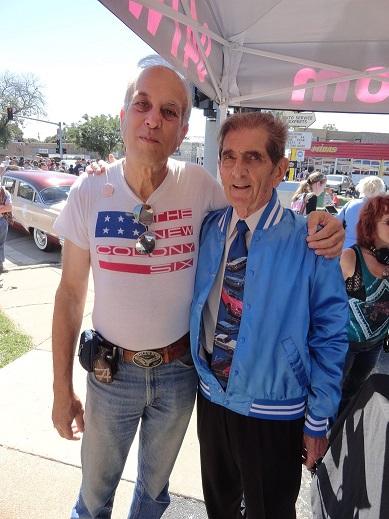 Dick Biondi has done SO many of these appearances over the years … record hops, car hops, car dealership, pizza joints … you name it, he was there … ANYTHING to get out in front of the fans.  (And let’s not forget about his decades-long, annual toy drives at Christmas time, where he would broadcast tirelessly taking in donations for the less fortunate children who couldn’t celebrate Christmas the way the rest of us did.)

A very caring and compassionate man who had the gift of gab and the sense of humor to keep us all entertained for over fifty years here in Chicago.

The movie needs to be finished … and it needs to be seen.  My understanding is that PBS has already agreed to air it and we’re just waiting for the final cut in order for them to be able to do so.  (My guess is it’ll be the PRELIMINARY final cut as Pam is STILL collecting great little tidbits to include in the film, even if only as dvd extras!)

Keep watching these pages for more news about upcoming fundraising events … and visit the website to donate what you can to help push this film over the top.  (kk)

We just sent this email blast to all of the subscribers on our list, teasing a big announcement coming soon, courtesy of Ron Onesti at The Arcada Theatre, who has been with us from the beginning, spearheading our efforts to get this film made and out in front of the fans.  (You’ll find a link to your Saturday post here as well!)

Thank you again for all your help and support on this project – it is much appreciated.

Ouch!  This seems a bit harsh!

Steve Van Zandt -- who inducted The Rascals into the Rock and Roll Hall of Fame in 1997, then brought them back together for a benefit in 2010, a short tour in 2012 and a Broadway residency in 2013 -- was asked on Twitter where things stood in his lawsuit to prevent singer and keyboardist Felix Cavaliere from owning the trademark. He says, “I am in court right now preventing Felix from trying to steal the Rascals trademark and [screw] his three brothers. He will never win. He is a scumbag. The whole world should boycott the lowlife.”

Yowzah!  I wasn’t even aware that there was a lawsuit going on over this.

Felix has been a good friend of Forgotten Hits over the years … and I recently had the opportunity to speak with Gene Cornish, too, who … as  I understand it … had been performing as part of “Felix Cavaliere’s Rascals” for a while.  (When Gene reteamed with Drummer Dino Danelli for several years, they performed as “The New Rascals” and two versions of the same band performing essentially the same material, one by a couple of guys who didn’t sing ANY of the group’s songs, was a  bit confusing, misleading and, quite honestly, a little pointless … but then again the “rhythm section” of CCR toured for decades with someone else singing all the songs written and originally sung by John Fogerty as Creedence Clearwater “Revisited,” essentially a “tribute band” to their own legacy.  (Hey, ALL of these guys were MAJOR players on the music scene in the ‘60’s … and this in no way is meant to diminish their contributions to these great groups … but like the REAL CCR, Felix and Eddie Brigati wrote and sang all the hits!  Still, every one of these artists deserves the right to make a living playing music and bringing enjoyment to their fans … as long as they properly represent what those fans are getting … and they pay heartfelt tribute to that music that they created.)

Eddie, for whatever reason, has decided NOT to focus on his past life, preferring instead to explore new avenues of musical theater.  Felix, on the other hand, has made a good living recreating the music and the mood of the band for decades now … so why all of a sudden is there a conflict over name rights?  Gene and Dino shut down The New Rascals YEARS ago!!!  Anybody able to shed some light on any of this?  I’m confused … and VERY sorry to hear that this has become a conflict.  (Not too long ago we talked here about how cool it would be to get The Rascals back together AGAIN by getting PBS to air their Once Upon A Dream live concert video presentation … guess THAT ain’t gonna happen!!!)  kk

Ringo's 81st birthday in just over a week away ... and, in typical Ringo fashion, he's inviting the whole world to join him in a celebration of Peace and Love ...

I never heard about this then or until now.  I have Wattstax on DVD, but this looks like it blows away Woodstock, if nothing else, due to the color and atmosphere and likely MUCH better performances!

I think we may have mentioned it once or twice.  I, too, was never aware of this at the time that it happened … or over the years since … but have seen it advertised several times since.  I’m curious enough to watch it … but haven’t yet.  (I cannot help but wonder just how much actual concert footage will be featured … but hey, I’m willing to give it a shot!)

If anyone else out there has already seen it and would like to submit a review, please drop me a line.  (kk)

As for our Mystery Doo-Wop Song ...

Thank you for having so many people work on this!

And although the particular radio show I heard it on featured about 95% of doo-wop from the 50s and 60s, occasionally they would include a newer song so you might be onto something there.

Well, now that the track is out there for people to actually listen to, maybe we'll get a more definitive response.  Stay tuned!  (kk)

Nice story today in www.bestclassicbands.com by Neal Umphred on "The Elvis Presley '68 Comeback Special." See below.

In 2008 I wrote the 5,000 word liner note booklet to the 40th anniversary reissue of this epic TV event for Sony/Legacy. Elvis meets the Wrecking Crew in the recording studio and the results are seismic.

The text by Harvey Kubernik nicely sets the scene and includes some ... The Night Elvis Reclaimed His Crown: In summer 1968, Elvis Presley taped a ...

Jan 8, 2021 — “By 1968, prior to the broadcast, Elvis was no longer seen by the mainstream as the atomic-powered rock and roll pioneer. Since his discharge ...

Harvey Kubernik, Rock's Backpages, August 2008. When Elvis Presley donned a black leather suit and stepped in front of NBC's cameras for his 1968 TV ...

BE SURE TO CHECK BACK TOMORROW FOR OUR SPECIAL SALUTE TO PAUL REVERE AND THE RAIDERS’ #1 HIT “INDIAN RESERVATION” … AS WELL AS A BRIEF HISTORY OF THE SONG.  SPREAD THE WORD! (kk)

And this final thought from Chuck Buell ...

Like so many of us, Chuck Buell loves a Good Summer Holiday!

And this weekend will be one of the Best of this Year, a Rare Fourth of July WEEKEND, a time when Forgotten Hitter Family Members come Home for a Short Visit!

CB ( which stands for “Celebratory Boy!” )

Actually, SHE might be the one leading the charge on this one!!!  (Paige has become QUITE the Beatles fan.  I'll never forget, growing up hearing so much of this music, the day she just came up to me as serious and sincere as can be and asked "How can one group write so many great songs?"  A question for the ages, my dear, a question for the ages.  All I can tell you is that it was a magical time.)