The New York City Mega-Concert looks to be QUITE the event!  Headliners Bruce Springsteen and Paul Simon will be joined by Santana (who will feature their #1 smash “Smooth” with Rob Thomas on lead vocals), Jennifer Hudson and more.  (Additional “special guests” and surprises are expected.)

Expected to run four hours (and broadcast live over CNN so that the rest of us can enjoy the concert at home), the whole thing is being helmed by the legendary Clive Davis, obviously still VERY much in touch with giving the people what they want at the ripe young age of 89!

It all takes place in Central Park (home to SO many landmark concerts over the years, including those performed by other Davis / Columbia acts like Simon and Garfunkel, Barbra Streisand, Stevie Wonder and Elton John to name just a few) on Saturday, August 21st.

FH Reader Tom Cuddy sent me this reminder of The Rascals and Steven Van Zandt in happier days … when their “Once Upon A Dream” show opened on Broadway back in 2013.  (Sounds like things have certainly deteriorated since then!)

Ironically, yesterday we received notice that the Bachman-Cummings show here in Chicago had been pushed back to September 10th … and the opening act had been changed from Dave Mason (who apparently is not ready to go back on the road yet after the whole Covid thing) by none other than Felix Cavaliere’s Rascals!!!

Honestly, when we first bought these tickets (now well over two years ago!) I never even figured that there would BE an opening act.  In my mind, two hours of Randy and Burton playing their huge volume of hits was all I needed to satisfy my rock and roll desires!

Through all of the recent press about the falling out of Little Steven and Felix, we haven’t really heard much of anything from Felix’s side on this … so it’s hard to even speculate as to what all the gory details might be.  (Then again, one of the sure-fire ways to prove you’re a big time rock star is to be court with somebody over something!!!  It just seems to be the OTHER side of the rock and roll lifestyle.)

That being said, it has to be difficult for Steven to deal with the downside of one of his all-time greatest idols.  Seeing the dark side of your heroes is always disappointing … but as a celebrity in his own right, Van Zandt also knows the dream isn’t always what it seems to the fans sitting in the third row.  (kk)

Tom also sent us this cool story on our FH Buddy Jim Holvay, that recently ran in The Chicago Reader …

Andrew Solt (who owns the rights to these programs!) sent me this recent New York Times article about “The Ed Sullivan Show,” still offering up top notch entertainment some 50-60+ years later …

The Ed Sullivan YouTube Channel continues to release new, full-length performances from the program on a weekly basis … clips that haven’t been seen in decades, most since the very first time their aired (between 1948 and 1971.)  Subscribe to the YouTube Channel to receive updates.  (kk)

You aroused my curiosity as to where Bill Cosby's record peaked here in the OKC area. I knew it was big, but how big I didn't know offhand. 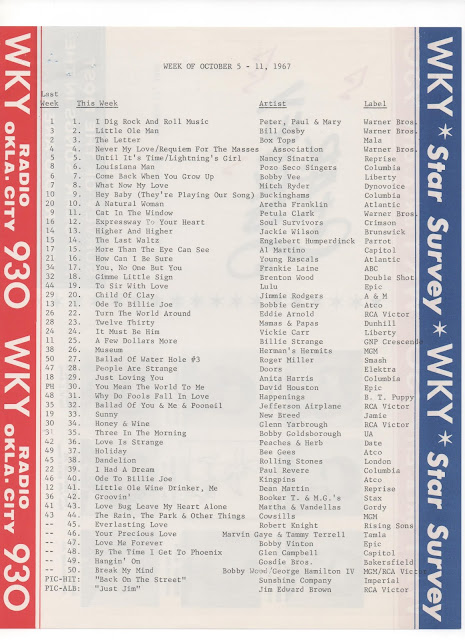 Wow … there are some pretty obscure and unusual tracks on THIS particular survey … especially for the heady times of 1967!  The list almost skews a little soft rock / adult contemporary (until you see “Ballad Of You And Me And Pooneil” by The Jefferson Airplane sitting at #31!  And up 17 places no less!)

Still, you had The Pozo Seco Singers in The Top Five, Engelbert Humperdinck, Al Martino and Frankie Laine in The Top 20 and Dean Martin, Roger Miller and Eddy Arnold positioned in the bottom half of The Top 50.

A few artists I’ve never even heard of on this list, too … local talent maybe?

Anita Harris, The Gosdie Brothers.  Kinda cool to see “Ode To Billie Joe” on the same chart by Bobbie Gentry and The Kingpins!  And I love the fact that WKY charted BOTH sides of The Association’s record, “Never My Love” / “Requiem For The Masses.”

I just checked and “Little Ole Man” did pretty well here in Chicago, too, where it also peaked at #2.  (kk)

This one showed up on my MSN feed the other day … the #1 Album for each year, dating back to 1956.  (You’ll be surprised by some of these … with soundtracks outselling albums by The Beatles, for example … or Harry Belafonte’s “Calypso” album eclipsing LPs put out by Elvis that same year … or and I’m not completely convinced that all of these are right … (although it WAS cool to see “Whipped Cream” win for The Biggest Album of 1966!) … “More Of The Monkees” outselling “Sgt. Pepper”???  “In-A-Gadda-Da-Vida” taking the top honors in 1969?  And seriously, “The World Is A Ghetto” by War winning the 1973 race?

We had some fun with The Beach Boys yesterday in Forgotten Hits … so today we’ll tell you that The Beach Boys Channel is back on SiriusXM for the summer.  LOTS of interesting tidbit and rare tracks to be found here … so check it out if you get the chance.  (kk)

We spent some time talking about “Where The Action Is” the other day and didn’t even realize that June 28th marked the 56th Anniversary of the premier of the show … so Happy Anniversary to all the hosts (and non-hosts) … and all the kids just like us who grew up watching it every day!  (kk)

We’ve shared Colin Donahue’s Mystery Doo-Wop Song with some of the most knowledgeable Doo-Wop aficionados on the list but still haven’t come up with an answer as to who (or what!) it might be …

I’ve never heard the song before. Pretty intricate arrangement and the group is good as well with a nice lead. That said, I’m clueless.
Sorry,
Danny
PS - I’d be interested to know if you get a correct answer.

"What is country music?"

That was the correct response to a clue on the TV game show, Jeopardy, about "the perfect song in this genre."

Verlinda Johnson Henning from Memphis got the question right, in the category about identifying musical genres.

Saving Country Music reminds us that David Allan Coe's 1975 hit, "You Never Even Called Me By My Name," was written by Steve Goodman and John Prine in a suite gifted to them by Paul Anka at the Waldorf Astoria hotel in New York City:

"The song was initially written as a kiss off to the country music industry for not giving recognition to Steve Goodman and John Prine, who were virtually unknowns when the song was written." 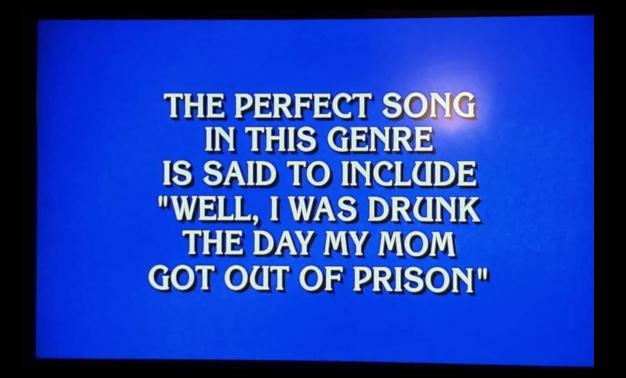