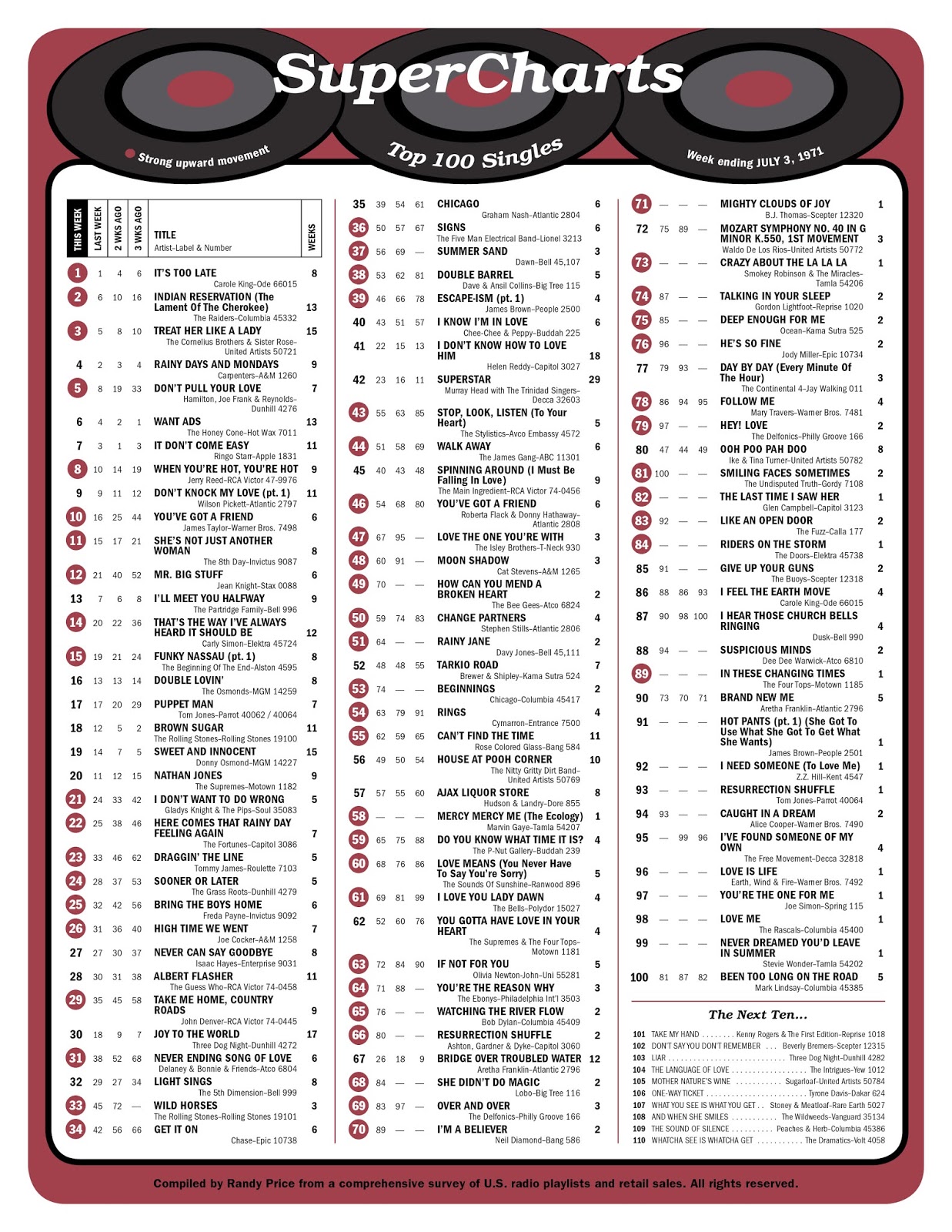 Carole King holds on to the #1 spot for a second week with "It's Too Late" while Paul Revere and the Raiders (actually now just billing themselves as "The Raiders") slide into the #2 spot (up from #6) with their big comeback record, "Indian Reservation."

Also showing upward movement within The Top Ten this week are "Treat Her Like A Lady" by Corneilus Brothers and Sister Rose, "Don't Pull Your Love" by Hamilton, Joe Frank and Reynolds, "When You're Hot, You're Hot" by Jerry Reed and "You've Got A Friend" by James Taylor, which moves up six spots from #16 to #10, giving Carole King TWO Top Ten songs this week.

This week's top debut belongs to Marvin Gaye ("Mercy Mercy Me"), which premiers at #58.  Other PERSONAL FAVORITES include "Mighty Clouds Of Joy" by B.J. Thomas (STILL one of my all-time favorites by him) and "Riders On The Storm" by The Doors (my all-time favorite by them).
As you know, we lost B.J. earlier this month to lung cancer ... and, within a week of "Riders On The Storm" hitting the charts, frontman Jim Morrison will be found dead in Paris.


"I've Found Somone Of My Own" is back on the charts after falling off for a week ... it "RE-premiers" at #95 in what is technically its fourth week on the chart.  Tom Jones debuts with HIS version of "Resurrection Shuffle" at #93.  (The Ashton, Gardner and Dyke version moves up to #66 this week, a climb of 14 spots) and "Smiling Faces Sometimes" by The Undisputed Truth jumps 19 places from #100 to #81, another one of this week's biggest movers.

THIS WEEK IN 1971:
June 27th – The Fillmore East, one of Rock And Roll premier venues, closes tonight after performances by The Allman Brothers Band, Edgar Winter, The Beach Boys and Country Joe MacDonald

Also on this date, in a case billed as The New York Times Company vs. The United States, The US Supreme Court rules that The New York Times may continue to publish The Pentagon Papers, stating that the government’s attempt to block them were “unconstitutional prior restraint.”

Also on this date, Missy Elliott is born

July 3rd – Doors Lead Singer Jim Morrison dies in Paris.  He is found dead in a bathtub.  News of his death was not made public until after his burial on  July 9th.  Fifty years later, Morrison remains a mystical figure … and a true icon of the rock and roll generation.  (Or, at the very least, a deranged poet who loved to show off his wiener ... which, in hindsight, may have made him even MORE famous!!!)
WATCH FOR:
A special salute to Paul Revere and the Raiders' #1 Hit "Indian Reservation" coming up on Wednesday, June 30th ...
And a tribute to Jim Morrison, compiled by Harvey Kubernik and told in the words of the people who were there at the time, including all of Jim's former bandmates in The Doors.   (That one'll run on July 3rd, the 50th Anniversary of Jim's death.)
GOOD STUFF comin' up in Forgotten Hits!
Posted by Kent Kotal at 6:00 AM