Micky Dolenz appeared at Saturday’s Grammy Salute in LA (at The Dolby Theatre) and officially inducted Neil Diamond into The Grammy Hall Of Fame with a Lifetime Achievement Award.

Dolenz performed Neil's "I'm A Believer" (which was a hit for The Monkees) and was joined by Diamond for the last verse of the song.
David Salidor 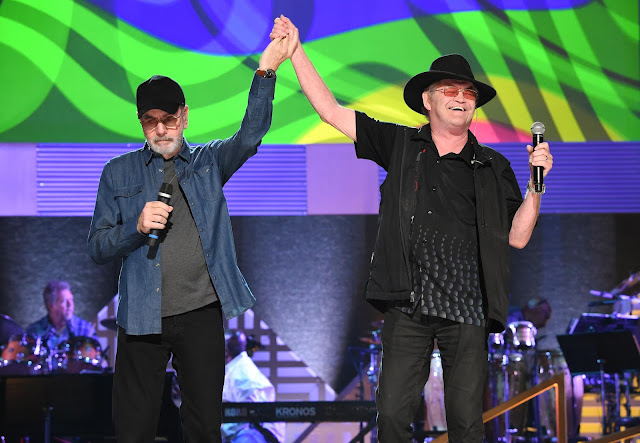 You went to a Doo-Wop Concert???
Can your wife verify that?  L-o-L!!
Frank  B.
She’s actually a bigger doo-wop fan than I am! It was a great show!  (kk)  Just shared your revue with The Larry Chance Fan Club.
FB
Thanks!  (kk)
After our Doo Wop Concert Review ran, Frank B sent us this vintage poster from a show on the East Coast several years ago!  (Man, check out that line-up!!!)  kk

kk …
Check out this show from the past.
Frank B 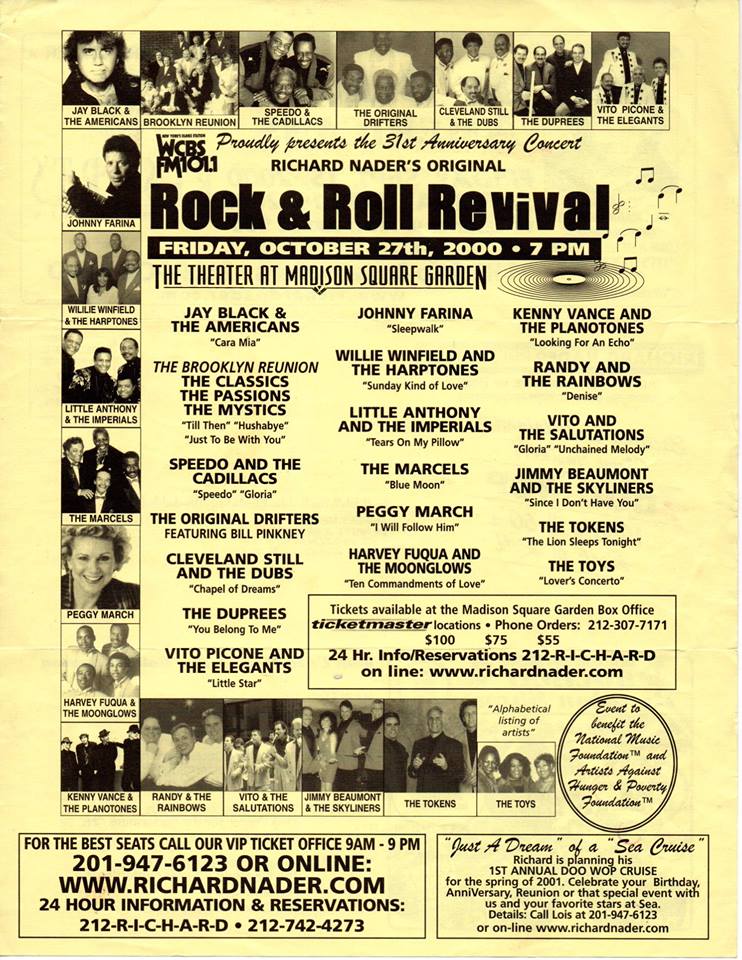 Kent,
I’ve been telling you and your readers you would have a ball. Doo-Wop is what my babysitters listened to and what I heard on the radio swimming at the pool, and many of the songs my dance coach (and my daughters’ dance coach) used in our acts as they are really jumping and jiving. It seems to me that much of the time, a headliner is added to these shows that does not seem to fit the Doo-Wop definition. However, when you are in the moment, it doesn’t much matter. It is great music all around. I have a few coming up myself. I have had a July hiatus, which has seemed to work out to Forgotten Hits benefit, because you have been very active in Chicago.
Shelley J Sweet-Tufano
We just haven’t had a lot of opportunities to see Doo-Wop Shows here in Chicago to the degree that they play on the East Coast.  (Ron Onesti has done his best to bring some of these to The Arcada … but this was our first.)  A very good time … with a very appreciative crowd of people.  (kk)

Kent,
You mentioned today that you had no idea what Freddy Cannon had to do with Doo- Wop. One reason could be that his records were being played on the radio at the time that doo-wop was being played and programmed. You are right in that he's not a doo-wop-er. But oh, can he rock and roll!
Larry

Watch for lots more Freddy Cannon comments tomorrow in Forgotten Hits.  (Be sure to get yours in NOW if you want to be included!)  kk

Hi Kent,
I totally agree with you … it certainly isn't the same when listening to a touring band without the original lead-singers, and the identifiable sound of their hit record.  Whether it be the Buckinghams, Three Dog Night, etc. and in the case of The Guess Who, not only Burton Cummings but also the very under-rated lead-guitarist Randy Bachman.
It is sad … human-nature and business sometimes get in the way of irreplaceable chemistry.
Enclosed is a video of the Guess Who at the top of their game performing "American Woman" when Bachman and Cummings were their nucleus.  Not only were they Canada's finest Rock band but also one of Rock's finest bands.  You have to ask yourself, does the Rock And Roll Hall Of Fame not see the obvious with the Guess Who, or did they just get a buy one get one free special on lobotomies.  After watching this video, it is hard to imagine, as you have stated many times, why the Guess Who has never been inducted into the Rock & Roll Hall Of Fame.
Peace,
Tim Kiley
https://www.youtube.com/watch?v=jo_2-bLGY5k

The East Coast Music Hall Of Fame has just announced its first round of inductees …
Our congratulations go out to CHARLIE GRACIE, CHUBBY CHECKER, CONNIE FRANCIS, LOU CHRISTIE, BOBBY RYDELL, FRANKIE AVALON, JAY SIEGEL (TOKENS), WILLIE WINFIELD (HARPTONES), LARRY CHANCE (EARLS), VITO PICCONE (ELEGANTS) and POSTHUMOUSLY JOHNNY MAESTRO (CRESTS), JIMMY BEAUMONT (SKYLINEES), EUGENE PITT (JIVE FIVE) and RICHARD NADAR (Concert Promoter).
It is SO cool to see so many of our favorites being honored.  (And we just saw Larry Chance and Jay Siegel last weekend at The Arcada Theatre Doo-Wop Show!)  We hear from Charlie Gracie all the time, recently saw Chubby Checker and ran a week-long series on Bobby Rydell.  (I’ve crossed paths with Frankie Avalon, too!)  Connie Francis has been in our pages lately, thanks to her new autobiography and we have often paid tribute to the incredible voices of Johnny Maestro and Jimmy Beaumont.  And Richard Nadar is the guy who promoted that oldies show displayed in the poster shown above.
WILDWOOD, NEW JERSEY will serve as the home of the museum and more.
It sounds like for a $25 donation, you can become a voting member for future events.  The whole thing has been put together by CEO and PRESIDENT TOMMY PETILLO, who is the current lead singer of THE DUPREES.

CHARLIE GRACIE and JOHN FOGERTY (Credence Clearwater Revival) are this year’s recipients of a (SPECIALLY CREATED MODEL) BUDDY HOLLY LEGACY GUITAR awarded by the BUDDY HOLLY EDUCATIONAL FOUNDATION in Dallas, Texas.
CHARLIE RECEIVED his GUITAR LAST SUNDAY in LOWESTOFT, ENGLAND where he’s the headliner at an International R&R Music Festival at Pakefield Seaside Village in SUFFOLK, ENGLAND
CHARLIE GRACIE and JOHN FOGERTY now join the ranks of PAUL McCARTNEY, ROGER DALTREY, GRAHAM NASH,  MICK JAGGER, CLIFF RICHARD, DUANE EDDY, BOB DYLAN, BRIAN MAY, DON MCLEAN, DON EVERLY, PAUL ANKA, PETER FRAMPTON, PETER ASHER and others — all of whom represent EXCELLENCE in MUSIC . THIS IS A GREAT HONOR and WE THANK YOU DEEPLY FROM THE HEART!
The mission of The Buddy Holly Educational Foundation is to honor Buddy's legacy as well as to make Buddy and Maria Elena Holly’s dream of extending musical education, including songwriting, production, arranging, orchestration, and performance, to new generations regardless of income or ethnicity or learning levels. We will empower a new generation to follow in Buddy's footsteps. 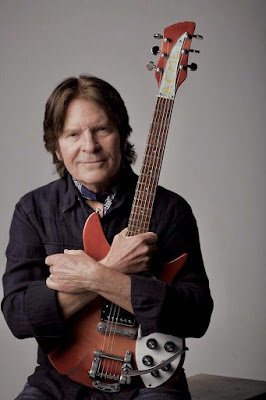 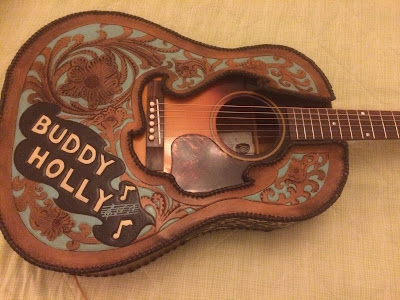 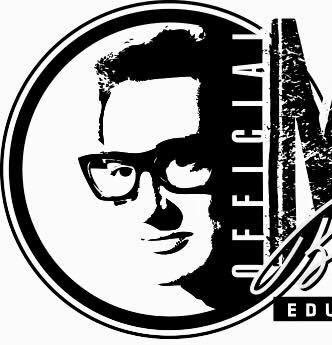 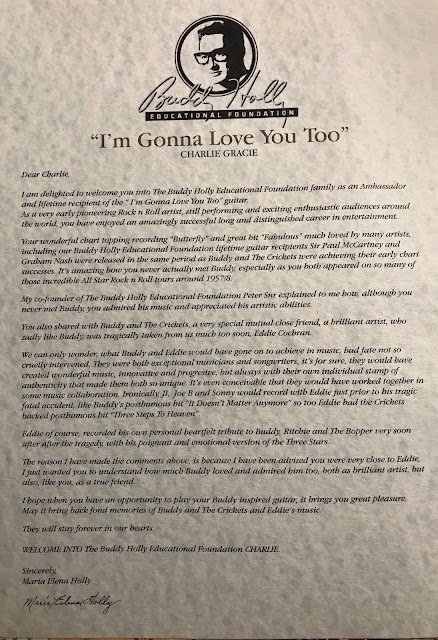 Paul Revere’s Raiders, Mitch Ryder and Peter Rivera return to The Arcada Theatre on September 29th.  (We had a great time at this show last year!)
Also just announced ... the return of The Fab Four (coming in January!)
This concert was a blast ... these guys have got it down!
https://forgottenhits60s.blogspot.com/2018/02/the-fab-four.html
Tickets are on sale now thru The Arcada Online Box Office at www.oshows.com  (kk)

Hi Kent,
I don't know how I missed The Flock tribute you did in 2010, but I did.
I was looking for Flock info because of the Sunday Comments and Google came through with Forgotten Hits tribute to The Flock.
Wow! Just What I Needed.
Great job, as usual.
Fred G if you're out there, I was a young fan in North Dakota. A DJ who would let me come and watch him do his show got me hooked on the first album -- I was 12.
Yes, I bought Dinosaur Swamps, too, and loved it.
Still love both albums.
Bill
Fred Glickstein is still around and still tickled pink every time The Flock get mentioned … or an album gets re-released.  We get to see him from time to time and he’s a great guy … I’m sure he’ll enjoy your post.  (kk)

Looks like yet another award for the great Bob Stroud …

Bob Stroud, legendary midday host on Hubbard Radio classic rock WDRV 97.1-FM, was named a finalist Monday for Major Market Personality of the Year in the National Association of Broadcasters’ 2018 Marconi Radio Awards. Other Chicago finalists are Tribune Broadcasting WGN 720-AM for News / Talk Station of the Year, and Hubbard Radio WSHE 100.3-FM for Adult Contemporary Station of the Year. Winners will be announced September 27 at the NAB Radio Show in Orlando, Florida.

Now that Paul Simon is leaving the road behind him, he has announced a brand new album dropping September 7th.


In The Blue Light shines fresh perspectives on ten of Paul Simon’s favorite (though perhaps less-familiar) songs from his unparalleled body of work. Discover new insight and energy in compositions like “Can’t Run But,” “Darling Lorraine,” “One Man’s Ceiling Is Another Man’s Floor” and “Questions For The Angels,” revisited here by Simon and a talented cast of musicians, including jazz icons Wynton Marsalis, Bill Frisell, Steve Gadd and Jack DeJohnette, as well as New York-based modern chamber sextet yMusic, currently accompanying Simon and his band on Homeward Bound – The Farewell Tour.

This album consists of songs that I thought were almost right, or were odd enough to be overlooked the first time around. Re-doing arrangements, harmonic structures, and lyrics that didn’t make their meaning clear, gave me time to clarify in my own head what I wanted to say, or realize what I was thinking and make it more easily understood.
– Paul Simon, July 2018

Produced by Paul Simon and Roy Halee, In The Blue Light is available everywhere on Friday, September 7.

HI TO MY SPECIAL FRIENDS AND FANS:
Save the date:
Some great news: The STONZEK THEATRE in Lake Worth, Florida, is presenting a stage reading of PEDESTALS, my absolute best and favorite play, on the last Monday and Tuesday of August (the 27th and 28th).
It's being directed by award-winning actor and director Saxz Stevens, a highly respected theatre veteran with a 20-mile-long list of credits.
The cast will feature some of the best actors in South Florida.
Tickets aren't available this early but when they are, they'll be free to Lind fans. Look for subsequent emails as the time draws closer. I'll send you out a second -- and probably third -- notice well in advance. And watch FaceBook and the events page of my web site (http://boblind.com/gigs/)
I hope to see a slew of you there.
And BTW don't forget, another of my plays, THE BIG ISLAND, will be presented by The Outre Theatre Company this coming season (date TBA).
Yers,
Bob Lind
www.boblind.com

From LJ Coon … taking a break from his on-going quest of solving the Buddy Holly plane crash ... to promote a brand new brand of ice cream!!!  (Hey, I’ll try a bowl!!!)  kk

This is a very Original idea / concept that could be offered not only in three separate products but also with its own 'Theme Song'.
The commercial appeal will be overwhelming … and the suggestive appeal will be Kent Kotal Pillow Talk / Good Times.
The kk's 'Baby Ala Mode' rockin’ Ice Cream'  three separate products will immediately become a  Pure Inspiration Brand, and a Household favorite.

kk's 'Baby Ala Mode' rockin’ Ice Cream'
It's Rockin’,
It's Cold,
It's Sticky,
It Pushes The Edge of Conventional

The production of  kk's 'Baby Ala Mode' rockin’ Ice Cream' is intended as three separate products ... Complete With Its Own Theme Song!

kk's 'Baby Ala Mode' rockin’ Ice Cream'
It's Rockin’,
It's Cold,
It's Sticky,
'It Pushes The Edge of Conventional'

Is he slammin’ the artists?  Or is he praising the quality of their hits, allowing them to endure five decades and still sound fresh and new??

Or is it just a whole lot of both going on here???

(He even slams the audience, referring to them as “the nearly dead”!)

I dunno … you decide … all I know is The Happy Together Tour provides ENDLESS entertainment and enjoyment … and we can’t wait to see it again when it hits The Paramount Theater in Aurora next month.  (kk)

KK ...
Lou Christie says “It Should Have Been A Hit”
I voted no.
FB
https://www.itshouldhavebeenahit.com/
A lot of different artists recorded this song so it must have struck a nerve with quite a few people.  While, I’m not particularly fond of this version, I do remember hearing it on the radio by SOMEBODY back at that time.  The biggest hit in Billboard was by Everything Is Everything, whose version went to #69 in 1969.  (kk)