I have seen the future of music … and it is a brand new group out of Liverpool, England, perhaps the most unlikely of places to give us rock and roll … but these four young lads have first captivated their homeland … and then all of Europe … and now have conquered The United States of America in a way we've not seen before.

They are witty and charming and seem so much wiser than their years.  They write infectious melodies  that stick in your head, get your feet moving and race up the charts in a seemingly unendless stream of #1 Hits.

They have affected fashion and hairstyles … and have made EVERYTHING British the latest rage here in The States.  (Your best friend is probably speaking with a pseudo-English accent right now … and the boy across the street is growing his hair out and coming it down into a sort of Moe Howard look!)  Their impact is everywhere around you.

Your favorite radio stations are playing nothing but British hits, it seems, from artists who just six weeks ago we'd never even heard of before … Gerry and the Pacemakers, Herman's Hermits, The Dave Clark Five, The Animals, The Zombies, The Rolling Stones, The Kinks, Billy J. Kramer and the Dakotas, and more ... and you don't mind it one bit.  (In fact, you want more, more, MORE!)   Not since Paul Revere traveled by horseback to alert civilians that "The British Are Coming" have we seen such an impact … and it has all happened literally overnight.

On February 9, 1964, The Beatles will make their first appearance on The Ed Sullivan Show and life for them … and the rest of the entire world … will never be the same again.

Of course, they'll be written off as the latest flash-in-the-pan fad … (ever notice how critic and cynic rhyme???)  "It'll never last," critics would write … they'll be described as hideous and atrocious looking, what with all that hair … just one more push toward juvenile delinquency for the American Teenager … who cared if, in the weeks following the assassination of our President, young Americans found something that could make them feel good again … something to lift their spirits and make them happy … but seriously, who could have possibly expected the long-lasting impact the music of these four young lads would have over the past fifty-plus years.

Who could have dreamed that a year and a half later Paul McCartney would write a song that would become the most recorded song in history with "Yesterday," a record that didn't even feature his bandmates but rather replaced them with a four-string quartet instead.  That their next series of albums … "Rubber Soul" and "Revolver" … and then "Sgt. Pepper's Lonely Hearts Club Band" … would continue to turn the world of music on its collective ear with new and innovative sounds as they grew by leaps and bounds into sophisticated songwriters and musicians no one (themselves included!) could have ever envisioned during the "Love Me Do" / "From Me To You" days … a time when they were still covering American rock and roll records to fill their albums because they hadn't written enough good material of their own yet to fill out their repertoire.

They eventually won over all of the cynics, down to the most sophisticated and scholared musicians, producers, fans and critics.

It may have taken the awhile to convince the hardest of hearts, but now, some fifty-plus years later, you can't go a day without hearing several examples of their work still played in heavy rotation on a daily basis on any radio station programming a variety of rock and/or pop music. Despite all of the predictions to the contrary, the music HAS lasted 50+ years ... and their fanbase continues to grow with each new discovery.  There are more Beatles fans TODAY than there were at their prime!

On February 9, 2018 … EXACTLY 54 years to the day of The Beatles' first appearance on The Ed Sullivan Show … we saw The Fab Four perform their Tribute to The Beatles at The Arcada Theatre … and they were AMAZING. 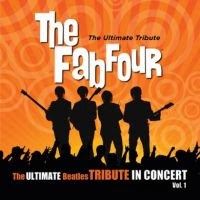 Letter-perfect renditions of all the hits, starting with the early stuff you'd expect like "From Me To You" and "I Want To Hold Your Hand" and moving thru their movie phase ("A Hard Day's Night," "I Should Have Known Better" and "Help!" were all featured) as well as the ultimate Beales-rockers "I Saw Her Standing There" and "Twist And Shout." 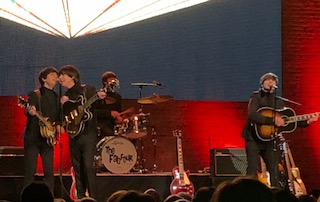 The show kept moving through various costume changes … the "Paul" character took solo stage to perform "Yesterday" (dressed in his Shea Stadium uniform jacked) with "George" filling in the string section on a keyboard in the corner of a darkened stage while the others changed into their Sgt. Pepper uniforms.  Soon they were all back on stage dressed in their Pepper garb, performing the title track right into "Ringo's" "With A Little Help From My Friends," just like on the record. 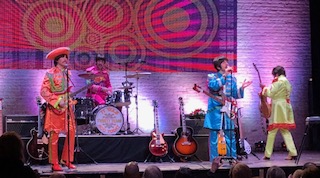 I have to tell you that I first saw The Fab Four last summer when they performed as part of the "50 Summers Of Love" tour, featuring Micky Dolenz of The Monkees and Mark Lindsay of Paul Revere and the Raiders.

After performing their own warm-up set of mostly post-1967 material (it WAS, The Summer Of Love tour, after all) , they then backed up Micky and Mark for their lengthy set of Monkees and Raiders hits, returning for an ensemble reading of The Beatles' classic "All You Need Is Love" for the encore.

One of the highlights that night … and again this past Friday Night … was when The Fab Four performed an absolutely stunning and breath-taking  version of "Strawberry Fields Forever."

It is nothing short of mezmerizing, watching these four musicians perform all of the parts necessary to accomplish a song as complicated and intricate as "Strawberry Fields."  As such, you'll find them muli-tasking, playing guitar AND keyboards (while still singing!) or Paul joining Ringo up on the drums and then grabbing his left-handed Hofner Bass and playing it with a bow (!) to get that special sound … presenting an incredible live performance that I doubt The Beatles themselves could have pulled off in their prime back in the day.  It is a show-stopping moment that just shows you how committed these guys are to not only putting on an incredible show but also staying true to performing the music as it was intended to be heard all those years ago.

OK, Cliché time … as it's been so often described as these types of events, the audience ranged from 8 to 80 … and it really did … and these fans … EVERY generation who were there or discovered The Beatles' music along the way thru their parents (or even grandparents) …. they were ALL there, enjoying every fun-packed moment, singing along, screaming on cue for special songs and moments … dancing to the very best of the early stuff and completely captivated by the later material like "Hey Jude," "Here Comes The Sun," "Revolution" and "While My Guitar Gently Weeps," performed as a "special encore" that included a "Fifth Beatle" by way of Arcada Theatre employee Nick Solideo who, when he's not playing his scorching Eric Clapton-worthy guitar solo on this track, works as a Project Manager and Special Assistant to Arcada CEO Ron Onesti.  (Frannie remarked that the ONLY thing that could have provided a stronger finish would have been if Nick threw his guitar up in the air after the performance while the audience watched it disappear completely into thin air, ala Prince at the Tribute To George Concert a few years back.  She also took most of the photos included here.) 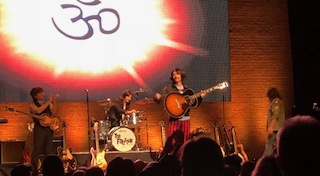 There are LOTS of Beatles tribute bands out there … and  we've probably seen dozens of them over the years … but we have NEVER seen a band SO dedicated to getting things right as these guy.  Every move, every mannerism, every little nuance … the fun way they present the music on stage and the confidence they have in themselves to perform it flawlessly in the process.  If for any reason The Fab Four are not already considered to be one of the Premier Beatles Tribute Bands in the world, then we will officially declare them as such here today.  Check out their website for shows near you … these guys need to be seen to be appreciated.

(Somebody on YouTube has posted a "complete performance" which I will admit that I have not viewed … but I do believe it will give you some insight into what you might expect to see at a live show.)

Check it out and then go see the real deal … because THESE guys are as close to "the real deal" as you're going to find.  A true, genuine love for the material … and a commitment to present it in a loving and respectful manner.

The Fab Four … they're OUR favorite Beatles Tribute Band.
kk