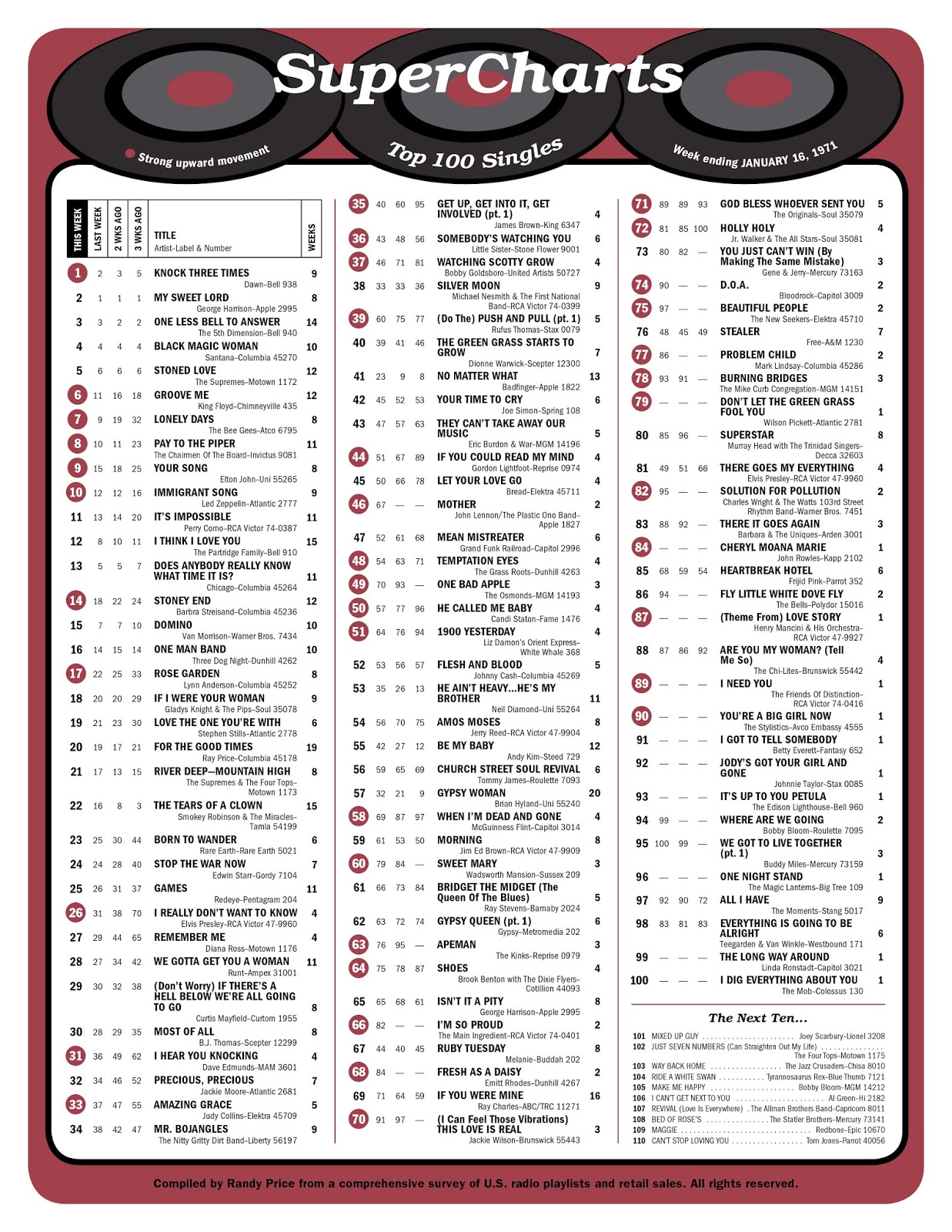 "Your Song" by Elton John is The Top Ten's biggest mover this week (from #15 to #9), but you'll see that SIX of this week's Top Ten Tunes all have bullets ... so a lot of upward movement this week.

Further down the chart, we see Rufus Thomas' "Do The Push And Pull" is up 21 places (from #60 to #39) ... and John Lennon's "Mother" is up a surprising 21 spots, from #67 to #46.  (I say surprising because this track really isn't for everyone ... John was going thru his Primal Scream therapy at the time ... and this one hardly "screams" pop song.  In hindsight, it won't be one of his more memorable hits ... but it was a significant step in his recovery.)

"One Bad Apple" by The Osmonds (a VERY Jackson Five-sounding record ... in fact, this song was first offered to the Motown act but they turned it down) jumps from #70 to #49 ... and "Sweet Mary" by Wadsworth Mansion (one of our featured tracks earlier this year) climbs from #79 to #60,

The top debut this week is all the way down at #79 ... "Don't Let The Green Grass Fool You" by Wilson Pickett, another song that won't make many "all-time favorites" lists.  In fact, of all the new music on the chart this week, the only two that made any kind of impression on me at all were "It's Up To You, Petula" by Edison Lighthouse and "I Dig Everything About You" by Chicago's The Mob ... which closes up the list at #100.  (Talk about two extremes!!!)  Jim Holvay (a frequent Forgotten Hits contributor) of The Mob is the guy who wrote four HUGE hits for The Buckinghams:  "Kind Of A Drag," "Don't You Care," "Hey Baby, They're Playing Our Song" and "Susan" ... yet "I Dig Everything About You" was the only hit his own band had.

January 12th – “All In The Family” premiers on CBS Television.
Created by Norman Lear and Bud Yorkin, the series, starring Carroll O’Connor and Jean Stapleton as Archie and Edith Bunker, will run for nine years, eventually spinning off to become “Archie Bunker’s Place," which ran for an additional four seasons.  It was considered a revolutionary, landmark series and was rated the Number One Show on Television for five consecutive years, eventually creating the spin-offs “The Jeffersons,” “Maude,” “Good Times” and “Gloria.”
All four principle actors (O’Connor, Stapleton, Sally Struthers and Rob Reiner) won Emmys for their roles.  The series won 22 Emmys during its run.